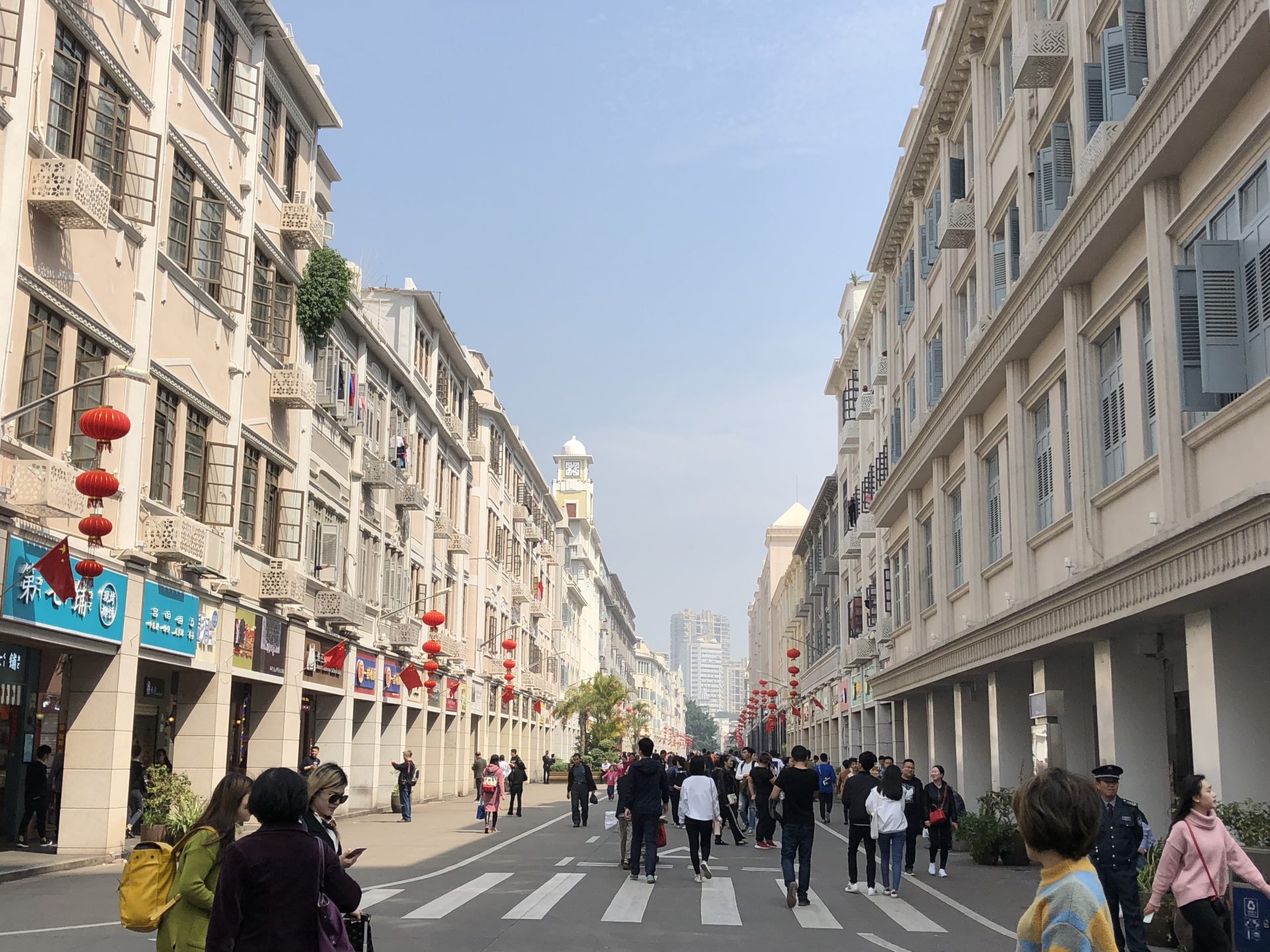 After an uneventful overnight cruise (the fog lifted, no one hit us, the captain stopped complaining), we awoke to a tropical paradise of tree-lined beaches, flower bedecked streets, sparkling new skyscrapers and a very laid back vibe.  We’re in Xiamen – rated as the #1 place to live and/or retire in China (or most of SE Asia, if you ask me).  If you’d like to know the correct way to pronounce Xiamen, just think of the Bob Marley song “Jammin” – and you’ve got it!

Xiamen is our first stop in mainland China and the first place we had to show the authorities our Chinese visas.  This beautiful city should also be added to your bucket list but you can’t come here on a whim.  The visa application process isn’t too difficult (as long as you’ve kept extensive medical records, your high school and college GPAs and can share at least one high-tech secret), but the entire application MUST be filled out in ALL CAPS.  I guess they want you to EMPHATICALLY state your desire to come to China.  No wishy-washy visa applications for them!

This charming (and astonishing, to us, with our preconceived notions of China) city is home to 3.5 million people, the world’s longest elevated bike path, more pianos per capita than any other city in the world and is a leading creative center for all of China.  Some initial impressions:

We KNEW we had to try the bike path, first thing. (Seriously, how often do you get to ride a bike along the sea in China?) China adopted dockless bike sharing in 2014 and now literally millions of bikes clutter the sidewalks in most Chinese cities, like this picture from Beijing. 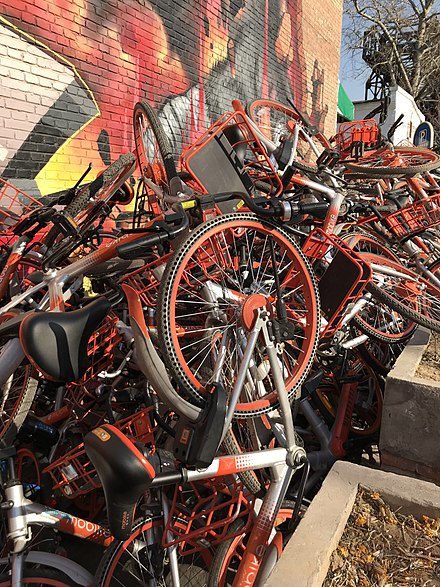 Things were a bit more restrained in Xiamen, where we had solo, tandem and three-uppers to choose from.  We all chose to go it alone.

Sadly, we weren’t able to ride on the 7.5 km long elevated path, so we contented ourselves with the 48 km seaside meander.  Pedalling along, we came upon this unusual event:

Now for their close-ups:

On this last Saturday of Chinese New Year, couples had flocked to the sea for their wedding portraits.  These are only a few of the happy newlyweds we found washed up on the rocks during our ride.

A trip to China is not complete without at least one Tai Chi demonstration.  The demonstration was poetic and the motions so fluid and beautiful;  it was easy to see why these folks were considered masters.

The most entertaining parts of the demonstration were the number of Chinese people who gathered to take photos of us (I was too embarrassed to point my camera directly at them) and our attempts to practice this ancient martial arts form. (Let’s just say we’re not going to hurt anybody with our new moves AND the masters kept hold of the swords.)

Parched after all that biking and fighting, we were treated to a tea ‘ceremony’ (read: buying opportunity) at a nearby teahouse.  We were assured that this was the REAL thing, but I had my suspicions when I saw the poster.

The takeaway: tea will cure everything.  Expensive tea will cure more of everything.  The Chinese like to test the temperature of their water with the ‘peepee boy’, who, after you pour boiling water in his head, pees farther the hotter the water.  We were all treated to a little warm shower with our tea. Fun! (?)

Our too-short time in Xiamen ended at the pedestrian shopping area you see at the top of this post.  It’s clearly designed to attract tourists, but it was gorgeous and the shops were sweet.  Here’s a peak inside a few of them:

And my personal favorite:

Sometimes, when we travel, I’m intrigued by the strangest things.  As we sailed into Xiamen in the early morning smog, this scene revealed itself.  The stark white dolphin sculpture must be HUGE (for a personal seaside art piece) and the skyscrapers in the mist give this an otherworldy feel.  Who lives here and why do they have a driveway that seems to empty into the sea?

Or these two buildings which look like 2 massive bird shapes. One (terrible) photo from the bus and the other from the ship.  You’d never know one bird was named Conrad unless you saw them at night. 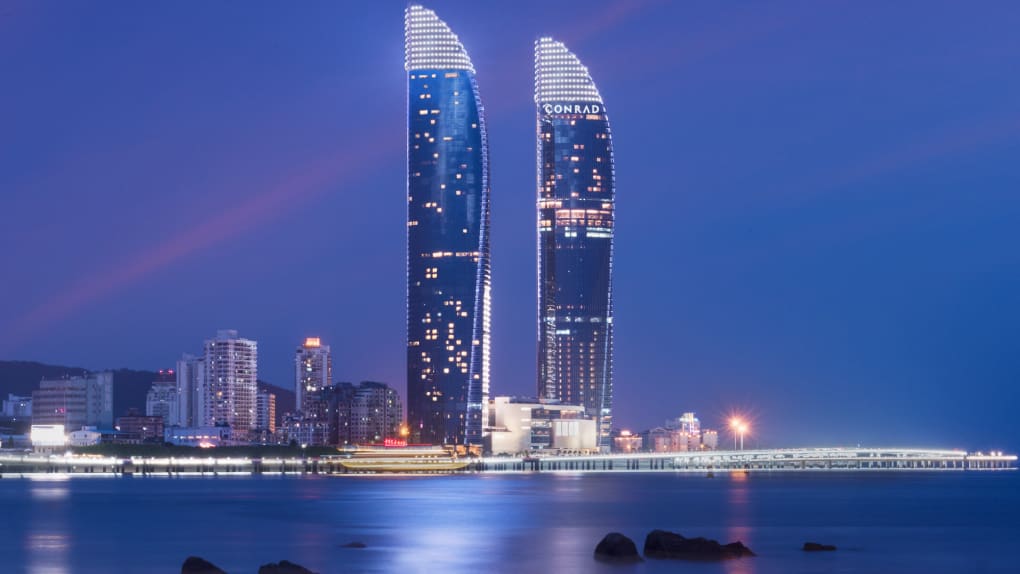 One final note:  they have some very talented barristas in China’s coffee shops.  Watch out, Starbucks! 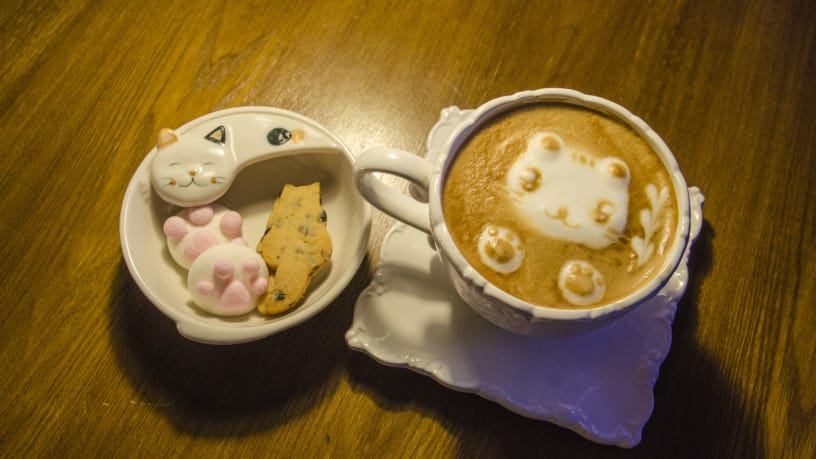