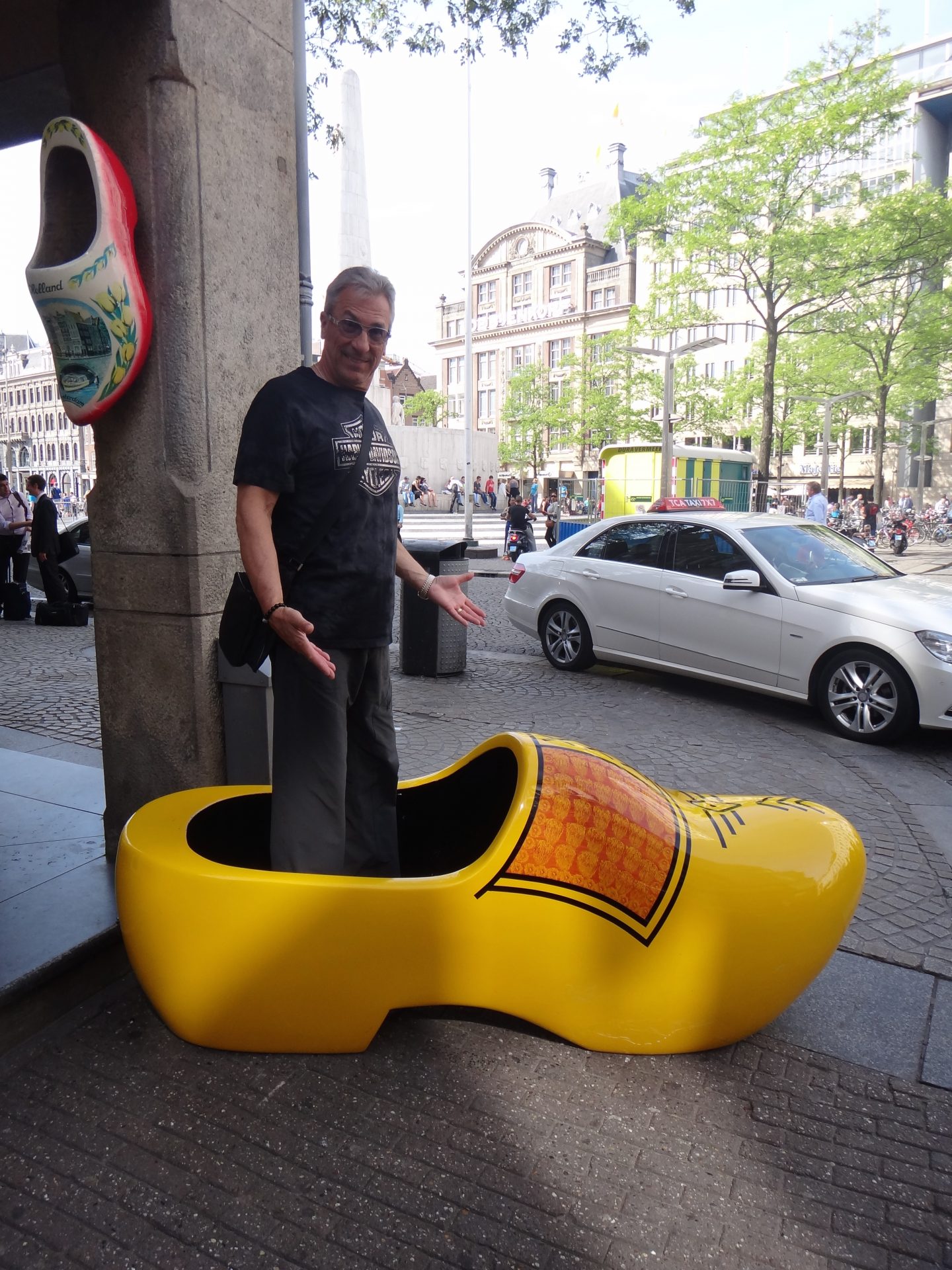 My apologies.  It’s late.  I haven’t had a good internet connection in days.  Right this minute, I’m at the bottom of a very deep set of locks in Frankfurt (on a ship).  Obviously, I’m not even in Amsterdam any longer.  But Roger gamely posed for this photo, so there was no way I wasn’t going to include it in this – the “European River Cruise of 2014” blog.

First:  the itinerary.   Three days in Amsterdam, fourteen days floating down the Rhine, Main and Danube Rivers, a few days (by car) in Budapest, Krakow, Poznan, Berlin, Leipzig and then return to Amsterdam to catch a flight home.

Back to Amsterdam.  We arrived at 6AM on a Sunday morning, sleep-deprived, dishevelled and crispy.  Don’t ever do this.  In ten hours (!!), we would be able to check into our hotel.  In three hours, we were told, the coffee shops would open.  The streets were empty.  Even the Red Light District was closed.  The only thing to do in the wee hours of a Sunday  morning in Amsterdam was to take a canal boat tour.   Here’s what we saw:

It wasn’t just lack of sleep that made many of the buildings appear crooked (we know.  We went back and checked after a nap.)  Nearly all of these structures were built in the 1600’s – the fact that they’re standing at all in a land that’s slowly sinking is a miracle of engineering.  (Our hotel was built in 1650.  It had every modern convenience.  Yet, at home, I can’t get an internet connection down the hall from the router in a 10 year old house.  Go figure.)

Amsterdam is a lovely city, except for one thing:  the profusion and chaos of the bicycles.  There are bike lanes everywhere; riders zip along at terrifying speeds (well, terrifying to pedestrians who can’t hear (or often, see) them coming) and there are far more bikes than cars on the road.  Some bikes are cared for and decorated (probably more for identification than aesthetics):

Most others are derelict and suffer from what we came to call ‘bicyclasm’ (def:  the piling, stacking, discarding and abandonment of bicycles at any point, anywhere, in the city of Amsterdam).  I won’t bore you with endless photos of this mess, but just to give you an idea:

Over three days, we wandered the canals and attractions of Amsterdam.  Here are a few more impressions: