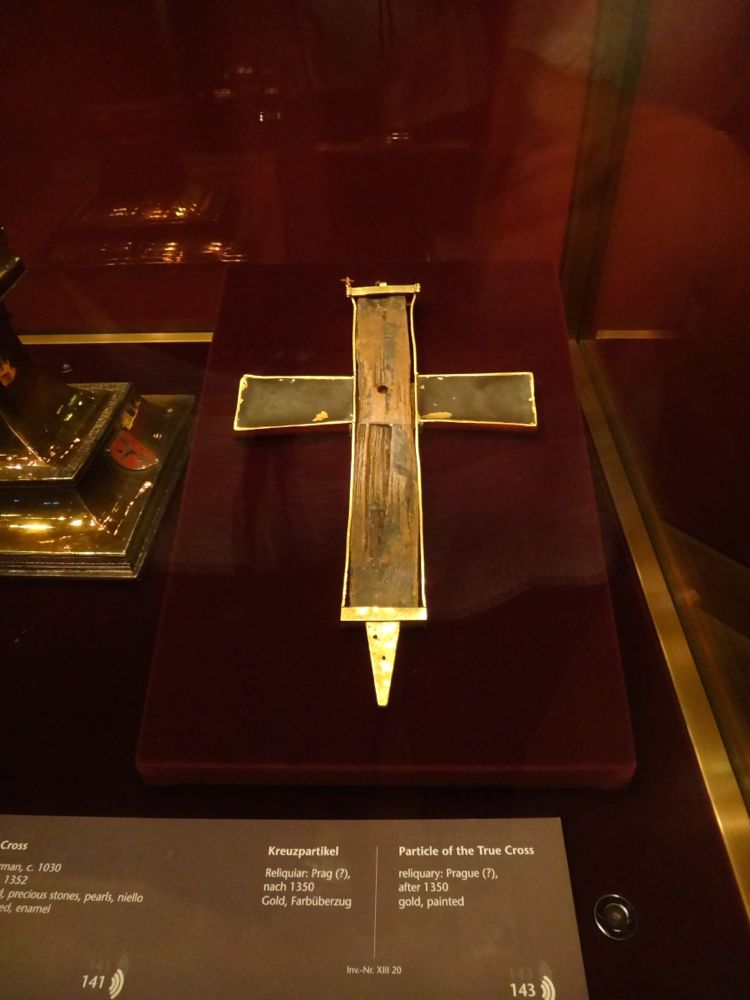 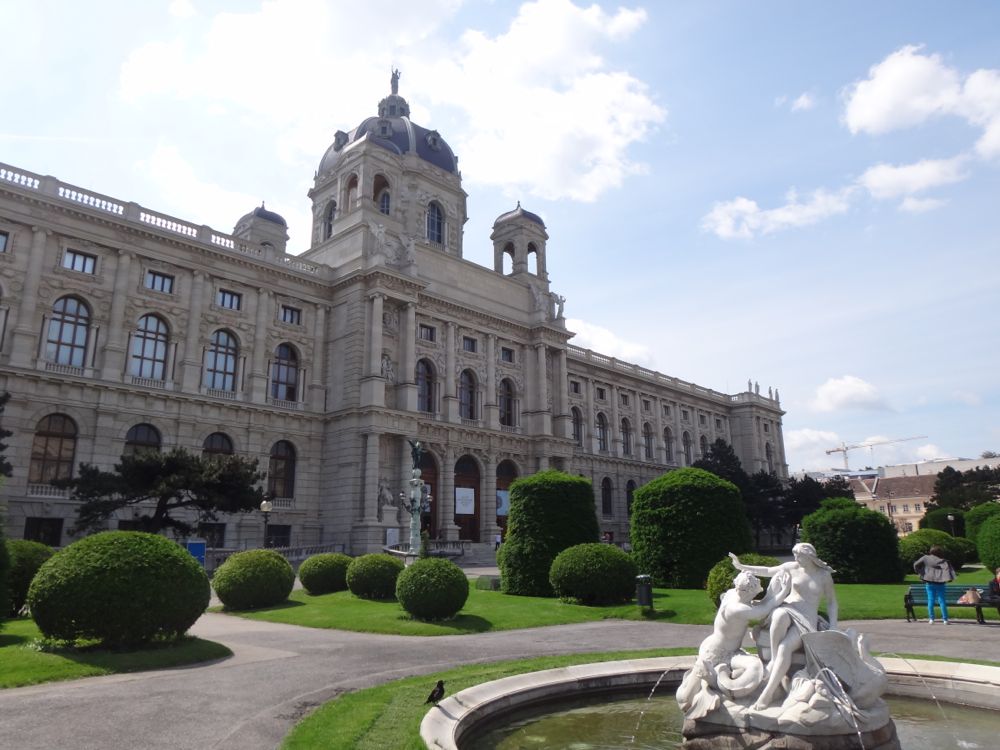 I’d always heard Vienna referred to as the ‘City of Dreams’ and I thought it was because of the beautiful baroque architecture, formal gardens and lovely setting (well, kind of) along the Danube.  Now I learn that it earned that moniker because it was home to Sigmund Freud.  This requires some analysis.

(Author’s note:  It must seem as if we’ve been on this cruise for months now!!  If only!!  I didn’t want to overwhelm your inboxes with my daily ditherings, so I’m eke-ing them out, slowly, over time.  (I hope you bought that.))

Vienna has often been named one of the world’s most livable cities (1st place in 2005, 2nd place in 2012 after Melbourne); the outdoor cafes and parks, the public transit, the number of music and theatrical venues attest to this honor.  But, even before such honorifics were thought about, Vienna was already a hugely popular city.  In 1913, Hitler, Trotsky, Tito, Freud and Stalin all lived within walking distance of each other.  Vienna has since instituted the “Only One Megalomaniac to a Neighborhood” rule. 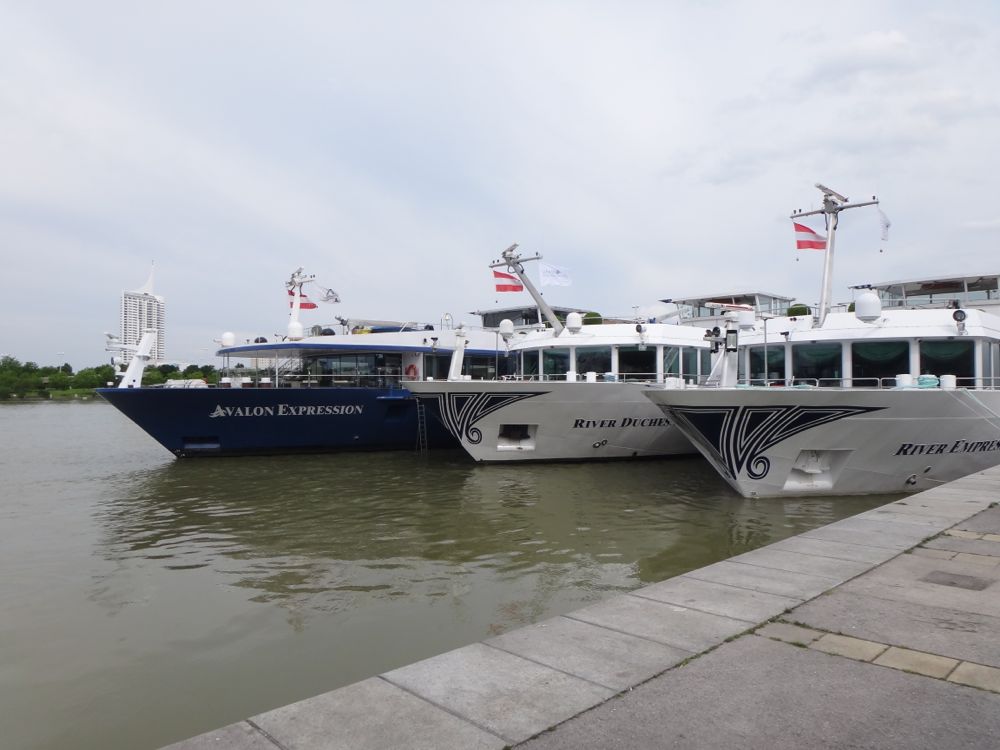 Speaking of which, ‘our’ neighborhood was getting a little crowded.  We’d been warned that there were too many cruise boats on the river and insufficient dockage in some of the larger cities.  You’ll see that we’re three abreast (above); with the two ships that aren’t hard up against the dock discharging their passengers through the adjoining ships.  Yep, everybody just walks through ‘your’ lobby.  It can get a little crowded, but security is tight and we never once found strangers napping in our stateroom.  (You will notice a bit of ‘cruise competition’, though – with passengers on one ship turning their noses up as they walk through another, while surreptitiously glancing around to see if the ‘digs’ are any better.) 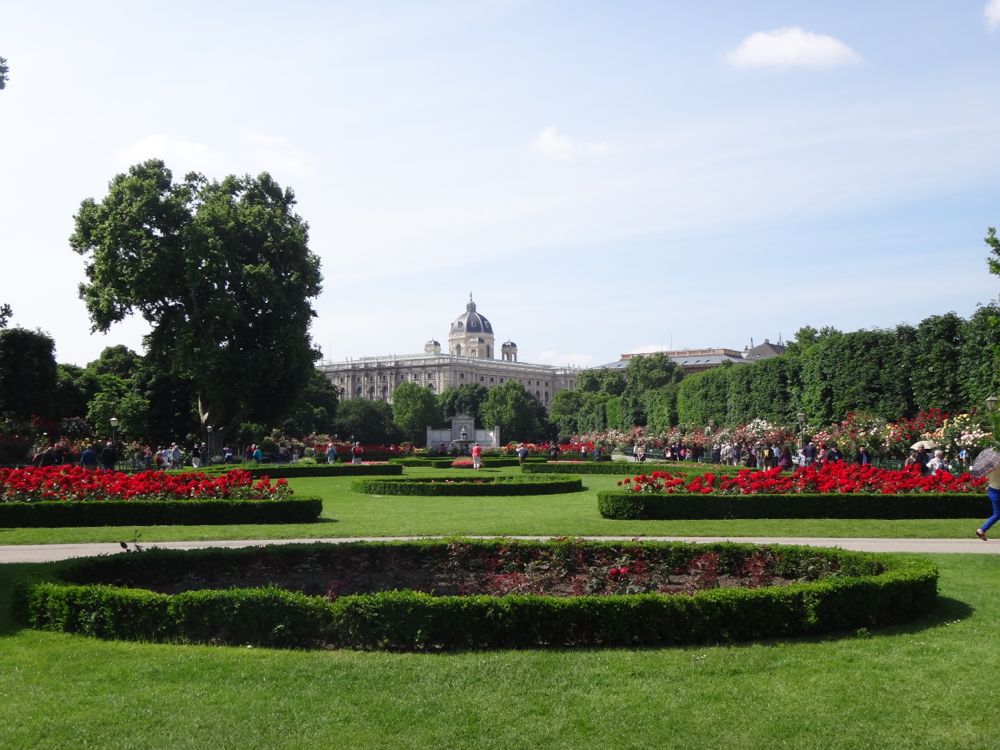 This wasn’t our first trip to Vienna so we had a short bucket list of places to revisit that we’d loved on previous visits.  The first was the Royal Rose Garden.  It’s simply one of the most breathtaking rose gardens in the world (my world, anyway).  With the indulgence of my patient husband, I attempted to sniff each and every rose – I was on odiferous overload (and I mean that in a good way!) 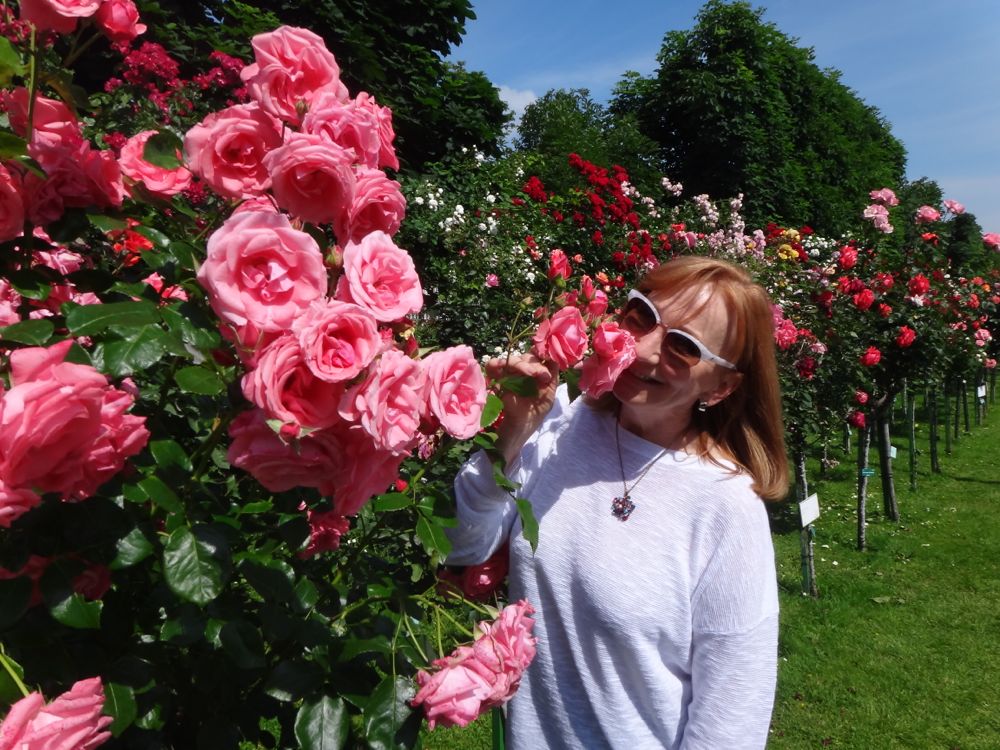 Across the street from the Rose Garden is Parliament, just one of the baroque treasures lining the Ring Road in this awesome city. 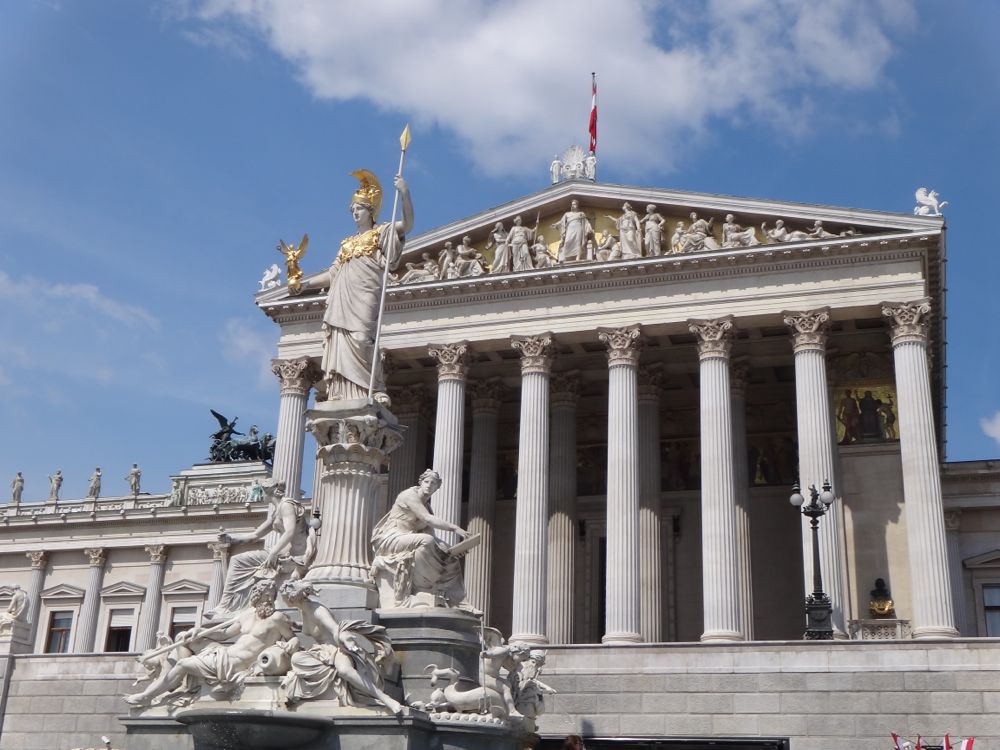 Next on our list was the Hapsburg Imperial Treasury.  In darkened rooms can be found the treasures of that most powerful of Austro-Hungarian families.  Room upon room of ermine-lined ceremonial robes, bejeweled crowns of gold, more reliquaries than you can shake the ‘true cross’ at, ancient Bibles and tributes from the Order of the Golden Fleece.  All authentic.  (Well, maybe…)  This level of wealth is beyond imagining.    Since none of it is for sale, we forced ourselves to leave after a couple of hours.  Stopping in the gift shop on the way out, we did purchase a couple of pencils and a key ring for the Haydock Treasury.  (We’ll be offering tours soon.)

Five million tourists visit Vienna each year; about 4 1/2 million of them were there in the treasury rooms at the same time as us.

After a brief bite of some Viennese pastry at an outdoor cafe , 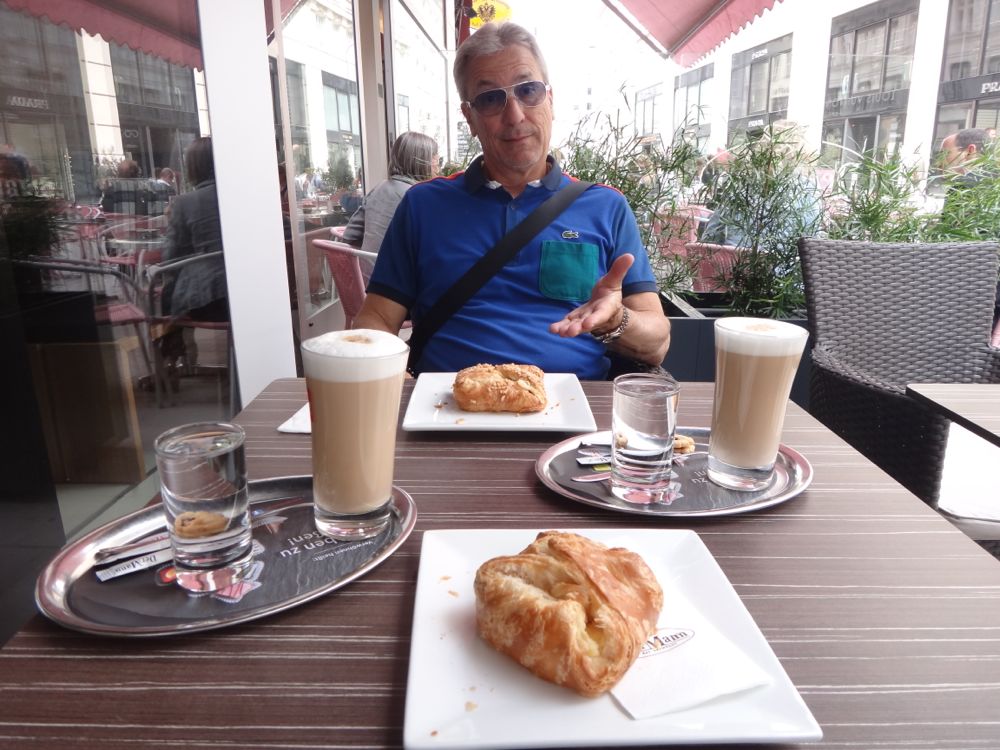 we wandered the city, enjoying the many tourist sights and discovering offbeat ones that the bused-in masses probably never see.  Here are a few of our ‘finds’:

Vienna is also known as the City of Music (which seems much more appropriate than the ‘dream’ thing).  From the Vienna Philharmonic Orchestra to the Vienna Boys’ Choir, Strauss waltzes to charming operettas, the streets of Vienna are filled with music.  Mozart, Haydn, Beethoven and Strauss all lived here – in fact, more famous composers have lived in Vienna than any place else in the world.  (No rules against that, apparently.)  On offer are walking tours that follow in the footsteps of the various composers as they went about creating their masterpieces; we’ll save that for our next visit.

The only disappointment (and it was a mild one) of the entire river cruise was one program in Vienna.  Billed as an evening of classical music and dance, it was held in the basement auditorium of a rather nondescript (albeit historic) building in central Vienna.  The conductor was terrific:  musically gifted and very funny (Austrians have a reputation for being humorless.  I probably should have checked his provenance.) Even the orchestra wasn’t bad.  The dancers, however – that’s another story.   Picture the dancers on Lawrence Welk (if you’re my age) or on “In Living Color”, if you’re your age, and then imagine them in shmaltzy costumes with a shmaltzy Austrian story line (sung in German, of course).  There you have it.  If you take a Uniworld cruise, pass on this entertainment.  Sit on the upper deck of the ship, sip cocktails and enjoy the not-so-blue Danube.  You’ll have a much better (but maybe less memorable?) time.