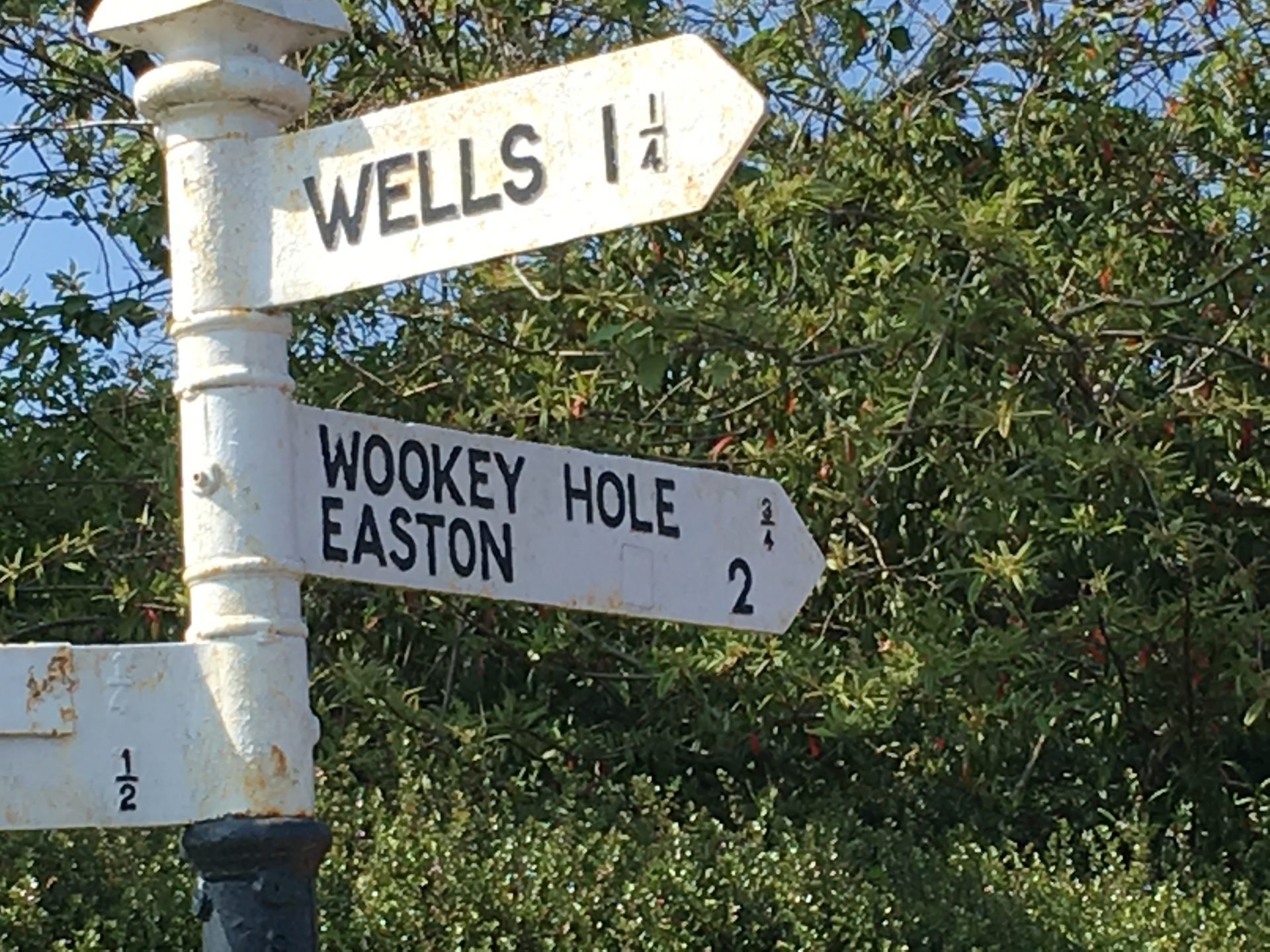 Where has the time gone? I don’t know about you (however, if you leave comments I WILL know about you), but I spent considerable time futzing with slow wifi on all of our recent travels and, ultimately gave up on the idea of ‘timely blogging’.  What you’re reading now is ‘untimely blogging’, which, hopefully, doesn’t carry the same semantic burden as ‘untimely death’.  Only the good (blogs) die young.  This one’s still going.

Okay, now that that’s out of the way, let me begin again.  When last we b-spoke (not to be confused with ‘bespoke’, the British word connoting ‘custom made’); my b-loved and I (yeah, I’m going to go with this ‘b’ thing) were stepping off a river cruise in the south of France.  We cavorted about in B-ritain (I’ll stop now) for a bit and then headed to Vienna to spend a week with the Chicago Humanities Festival folks. A late breaking (or just plain late) blog on that trip is in the works.

I have Britain on the brain because a: we returned there last April and b: we love Great Britain.  Our itinerary included a jaunt to the Lake District in northern England to visit with James Rebanks, author of “The Shepherd’s Life” (a book we highly recommend).  We met James last November in Chicago at the Humanities Festival; he graciously invited us to tea at his home in the north of England, assuming, of course, that we’d never show up.  Well, we showed him!  We not only showed up, we stayed on for a week (not with James, but thanks for assuming that’s the kind of thing we’d do), visiting with shepherd James and his wife, Helen, and their remarkable “why-aren’t-all-kids-like-this” children (six-year-old Isaac, just having learned to write, was kind enough to provide Roger and me with name tags for our visit to their home.   Mine:  “Elaine Haydock, American”).

England’s Lake District (pictured in the photo at the very top) is an area of jaw-droppingly serene beauty.  It’s just been named one of Unesco’s World Heritage Sites, so its beauty and culture is now protected forever (some credit is due James for his work for Unesco and the global reach of his book about the ancient tradition of shepherding among the fells (as the hills and valleys of the District are known).  It’s a bit of a hike from London (it basically borders Scotland – about a 3 hour train ride or 5 hour drive) but it should be on the itinerary of anyone travelling to Britain for more than a peek at Big Ben and tea at Buckingham Palace.  It drips with charming villages and is filled with cozy places to stay (we rely on Rural Retreats for vacation rentals.  See photo of our view, below). There are great restaurants, mountain hiking, tranquil boat rides, (did I mention the scenery?) and SHEEP.  Lots and lots of sheep.  To wit: (well, it was raining, so most of the sheep sought shelter.  But these are James’ sheep – tups and ewes.  And if you want to find out about tups, please read James’ book.  I guarantee that you’ll find it fascinating.)

After haranguing James and his family for as long as possible, we set out to see some of the other sights in this most beautiful of National Parks (Wordsworth, official poet of the LD, wouldn’t steer you wrong, would he?)  We had zipped up here on the motorway, a wide, muscular sort of highway, with just a few hour-long queus to test our resolve.  It was only when we exited the freeway that we realized we were once more in the land of single lane roads.  As in:  ONE lane roads for cars going in both directions.  (Oh, there are also plenty of ‘two-lane’ (~snicker~) roads to drive on, so don’t go getting your knickers in a knot about it.)  The English, of course, are used to inhaling deeply and holding their beath as they meet oncoming cars (wait!  No, that’s me!)  They are easily able to pass each other on the tightest of footpaths/er… roads.  We, however, are a bit more skittish about cars approaching you at 40 mph with only 6″ of side room WHILE driving on the ‘wrong side of the road’. Some fun photographs for you:

(The middle photograph isn’t even a fair representation because there’s actually room for the silver car to turn around.   He won’t, but there’s room.  Generally one of the drivers has to back up to a tiny outcropping of asphalt, coat his side of the car with Vaseline and then wait patiently for the ‘alpha’ car to squeeze by.)   You get used to it after awhile.  You stop clenching your sphincter.  And then you encounter something like this: 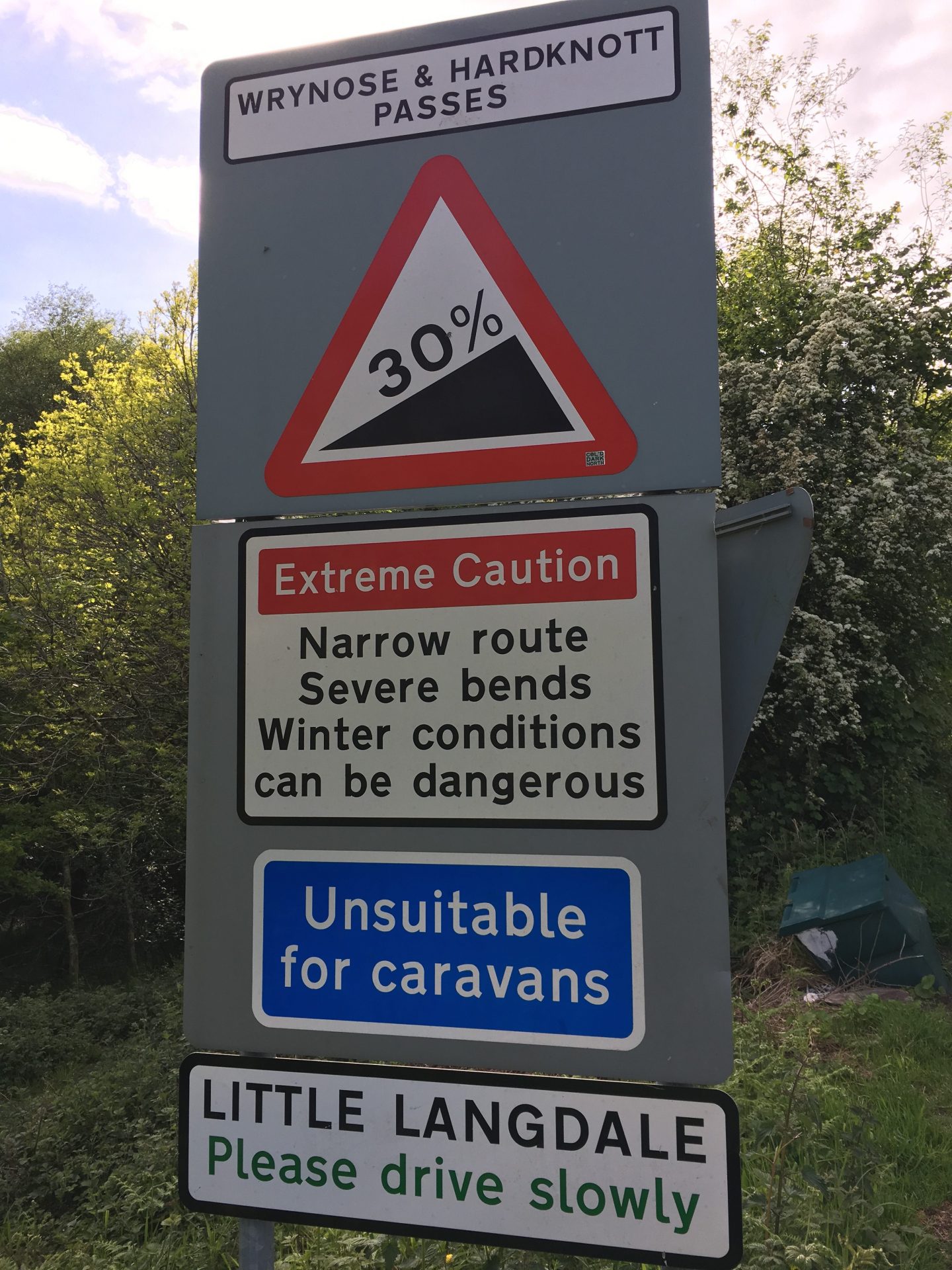 I love a sign that begins with “Extreme Caution” and ends with “Please drive slowly”.  Ya think?  And the 30% grade?  Where you have to brace your feet to stop from sliding under the dashboard on the downhill?  We thought we were REALLY SOMETHING driving this road, until James told us that he regularly pulls a large wagon full of sheep with his tractor over this very pass.

Once you stop screaming and open your eyes, you’ll be assaulted by scenery like this: 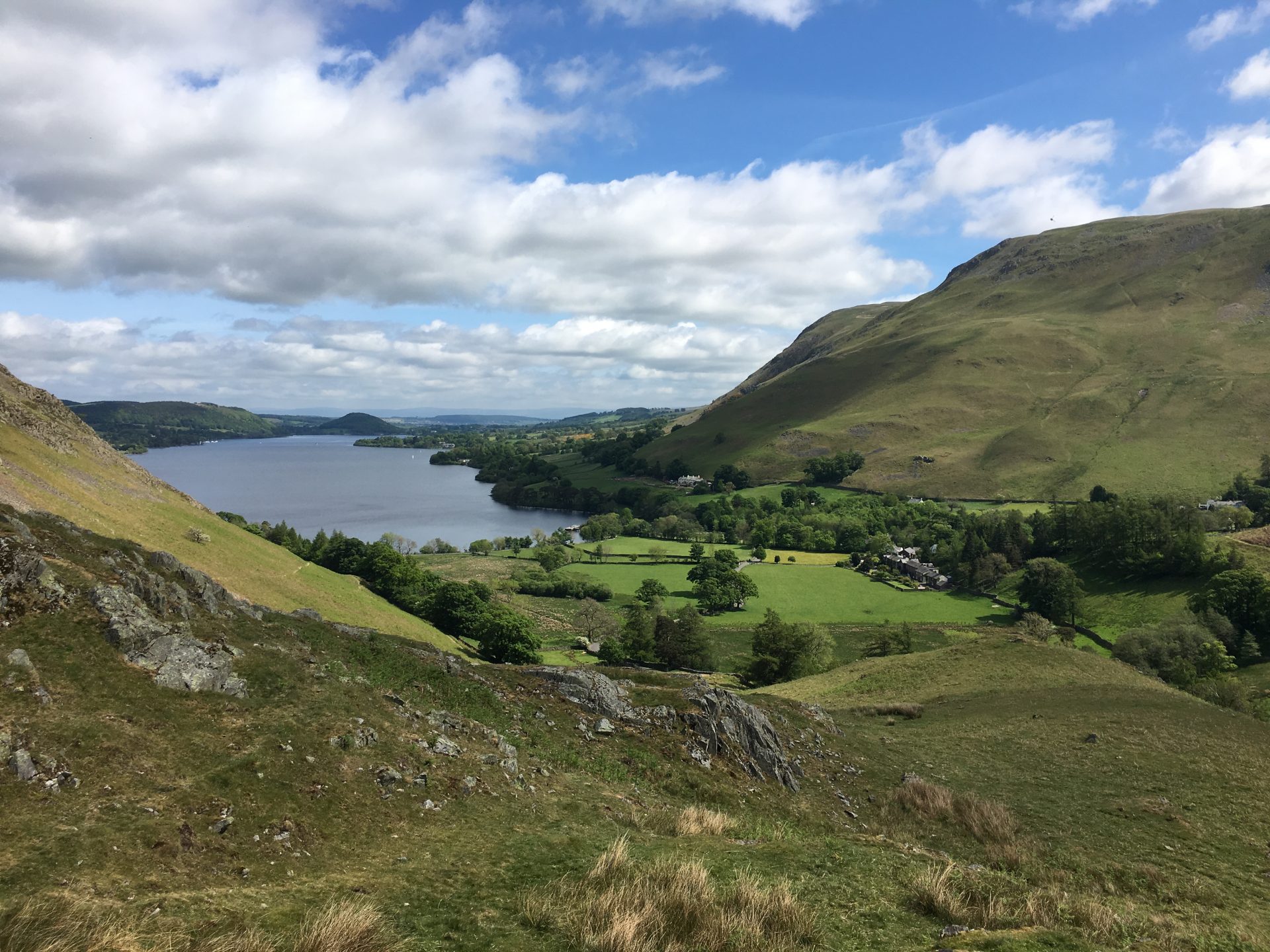 One last scenic note:  after leaving the Lake District, we readied ourselves for the more mundane but typically bucolic English countryside as we drove south.  Then we sidetracked into the little village of Kirkby Lonsdale and encountered this – the famous Ruskin’s View, which JMW Turner painted from a tiny adjoining churchyard.  (I LOVE me a Turner, but I think the actual view is better than the actual painting) .  Actual view: 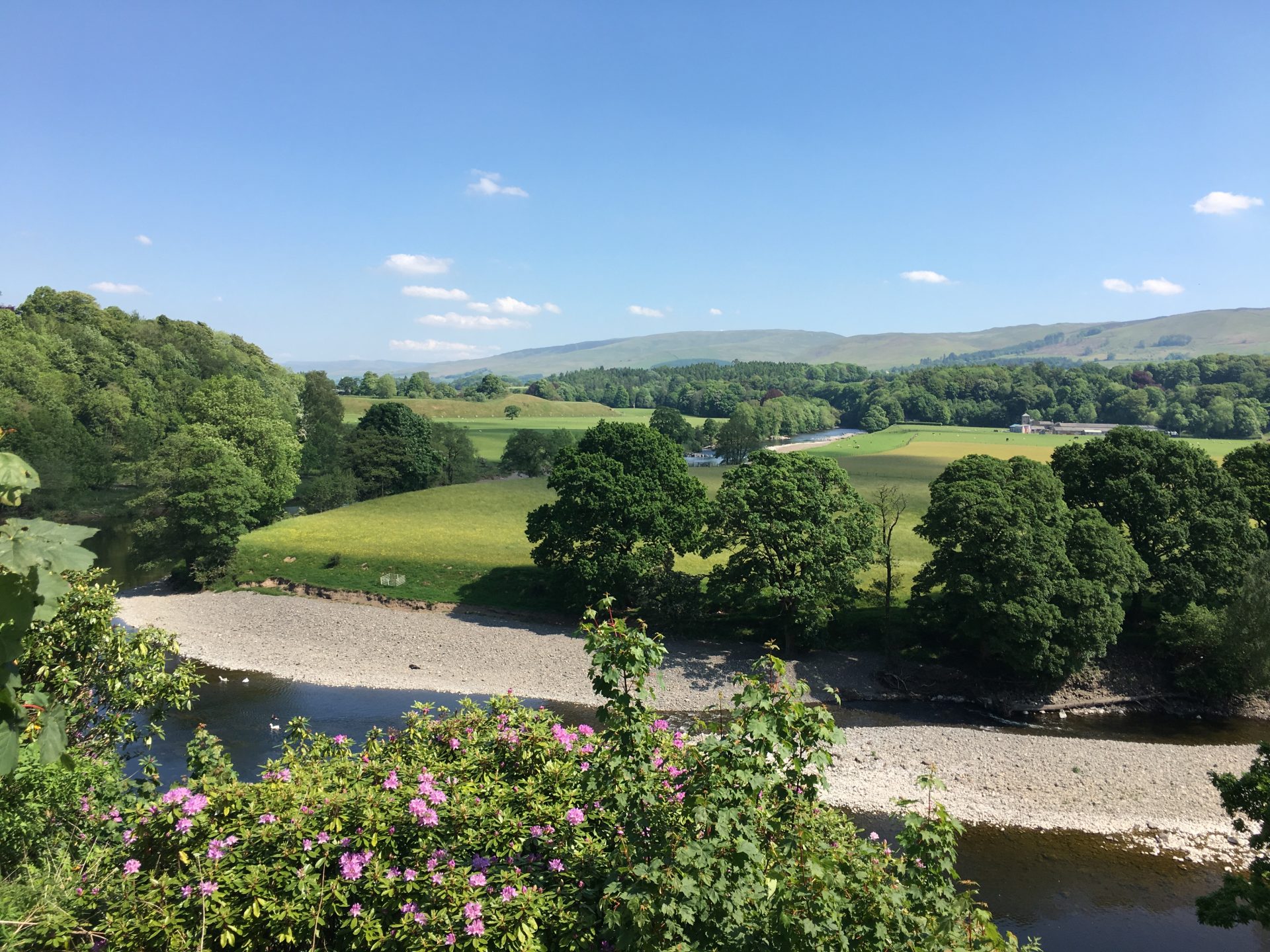 Actual painting:  See what I mean? 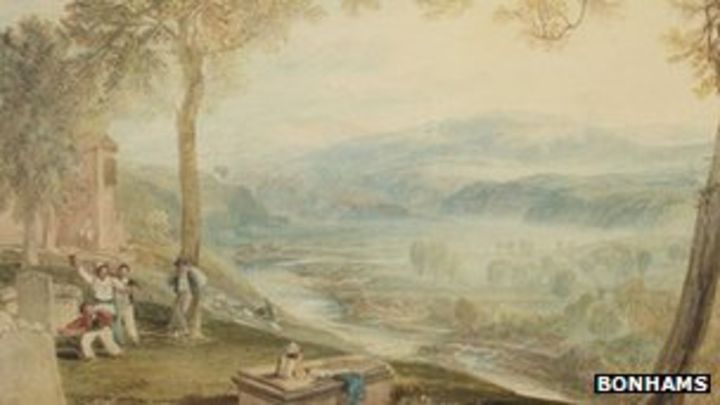 After driving their challenging roads, the English, being the lovely people they are, will ultimately reward you with a roadside treat:

P.S.  “The Shepherd’s Life” was adapted for the stage and enjoyed a successful run in 2016; it’s now being made into a BBC series.  I was lucky enough to ‘meet’ one the sheepdogs that star in the play:  (With me is Conrad Lynch, Artistic Director of Theatre by the Lake (whose President is none other than Dame Judi Dench.)

The sheep and dogs were created by The Handspring Puppet Company, the same folks that did the horses in the play “Warhorse”.