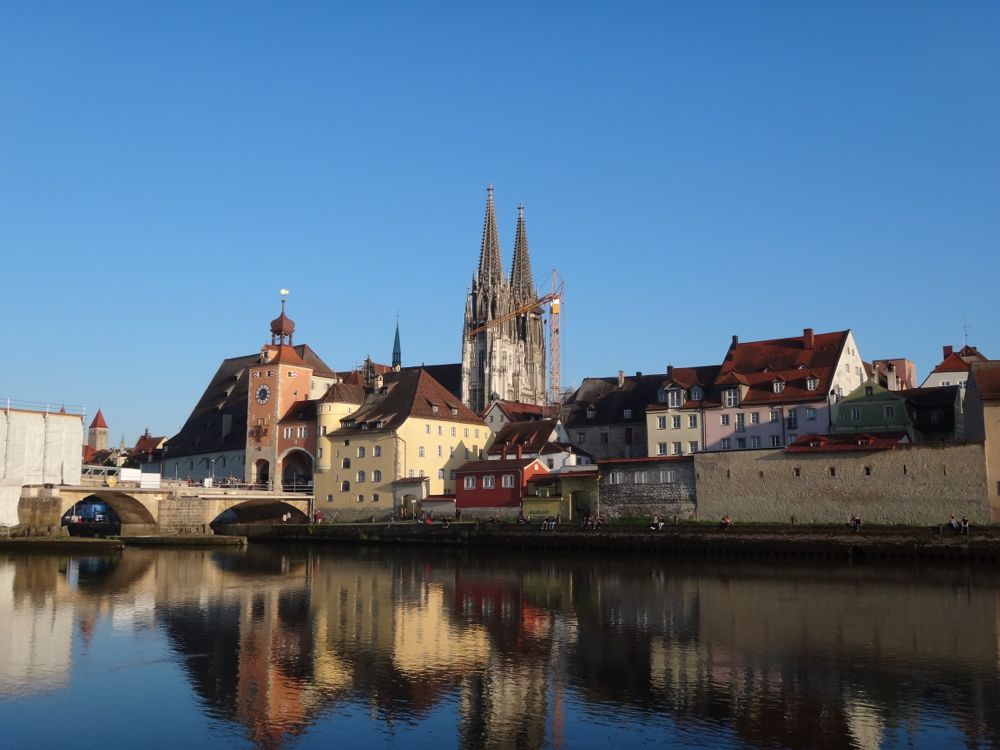 What’s the first thing you think of when you think of Germany? Well, Catholics, right? (What? No??)  Katholikentag (or Catholic Days); a three day celebration of all things German Catholic, was in full roil as we docked in Regensburg.   Begun in 1848, it draws about 500,000 participants and is an enormous honor for the chosen host city.  It’s a festival organized by Catholic laity, but what would a Catholic festival be without battalions of priests and nuns roaming the streets, arguing the 11th commandment (succinctly expressed in signage outside the cathedral:  “Thou Shalt Not Pay for Catholic Day with State Funds”) or playing games like this one: (Apologies for the photo.  Those of you who attended Catholic school will understand my reluctance to hip-check the nun out of the way.)

Modern Christian music bounced through the narrow streets while throngs rushed the only open door in the cathedral for the Official Daily Mass (when was the last time you saw people pushing and shoving to get INTO church?)

We trailed a rapidly walking monsignor for a bit; he moved through the streets like a rock star – trailing an entourage and bestowing blessings as he went.   (Isn’t that Adam Levine with him, below?) 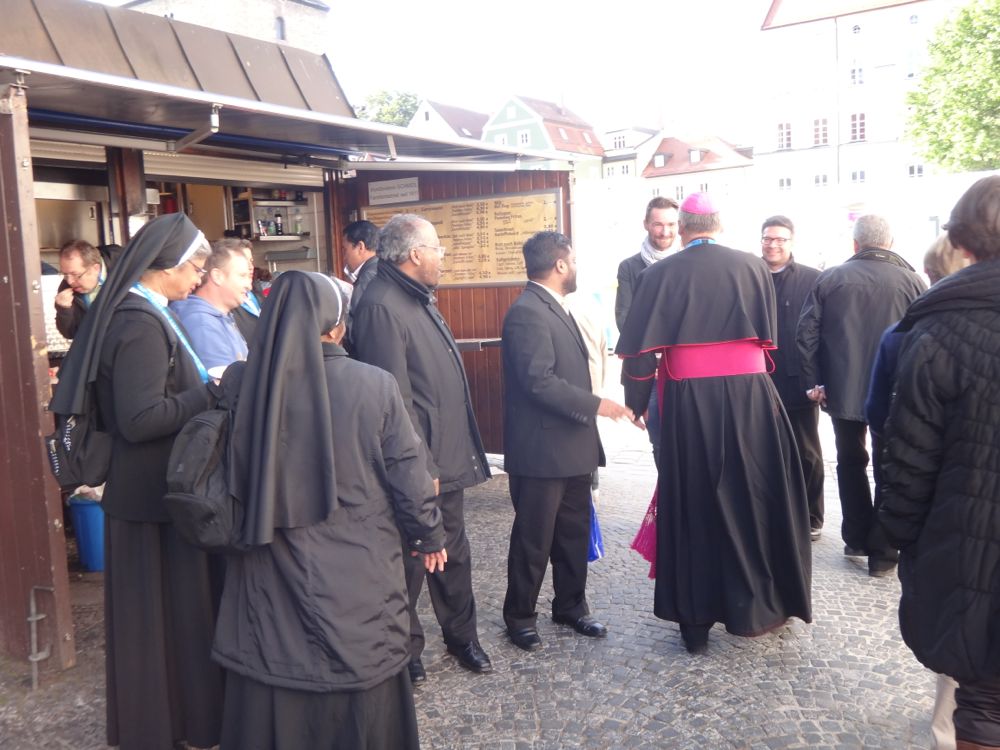 Crowds also pushed and shoved to get into the Wurstkuche, or the sausage kitchen, built in the 1300’s and STILL serving sausages.   (I’m pretty sure the sausage stove hailed from the 1300’s, too.  Have the Germans ever heard of Easy-Off?)   We tried the sausages – they’re still made from the original recipe and were delicious.   I’m suggesting a sign outside the Wurstkuche, a la McDonald’s:  “70 Gazillion Served Since 1300”.

Later in the day, the few and the brave saddled up and tried to race the ship to Austria (the bikers won, again!).

I’m not just speaking lightly when I refer to the  brave – during the ride, thunder rumbled, rain fell and the heavy bikes had to be portaged up and down steep stairways as we traversed another one of those crazy locks.   At ride’s end, we boarded a ferry that looked like something from The Hobbit.  Not only did this vessel not look sea-worthy, but Captain Frodo Boggins, busily serving schnapps to all aboard, forgot about weight distribution as we teetered perilously to portside.  He was serving serious GERMAN schnapps; they’re what you would serve your teenager in a subversive ‘you’ll never drink again in your lifetime’ sampling of the taste of alcohol.  Fun (and a little gagging) was had by all. 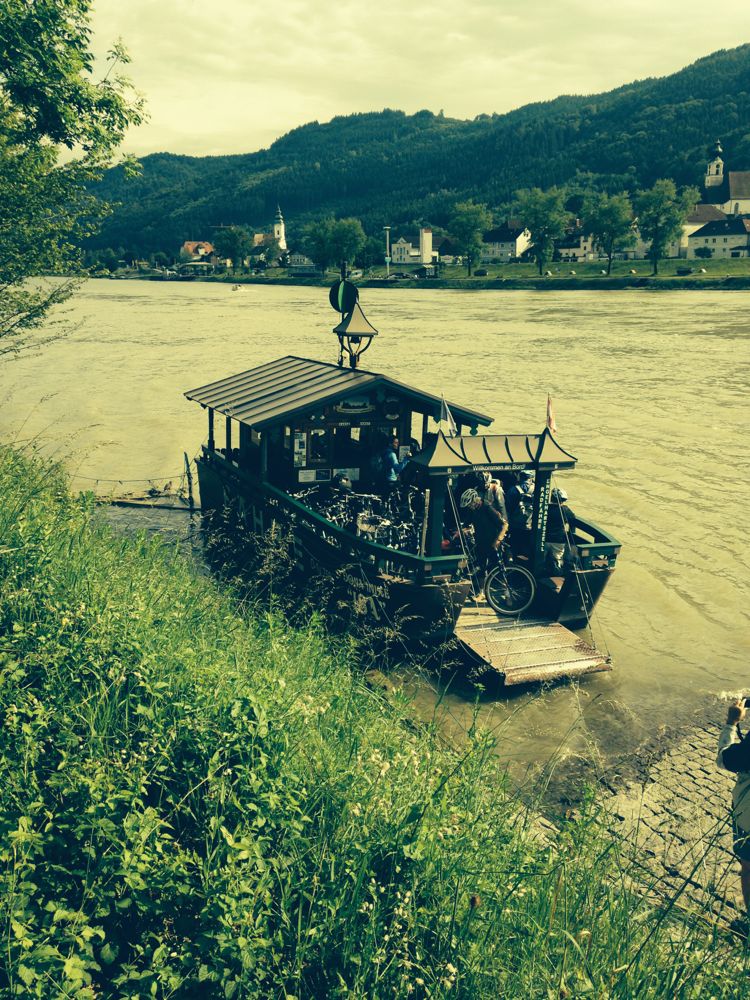 Despite the rain and schnapps, I had the time of my life: I rode the only bike I’ve ever seen that had a shock absorber.  I literally bounced into Austria. 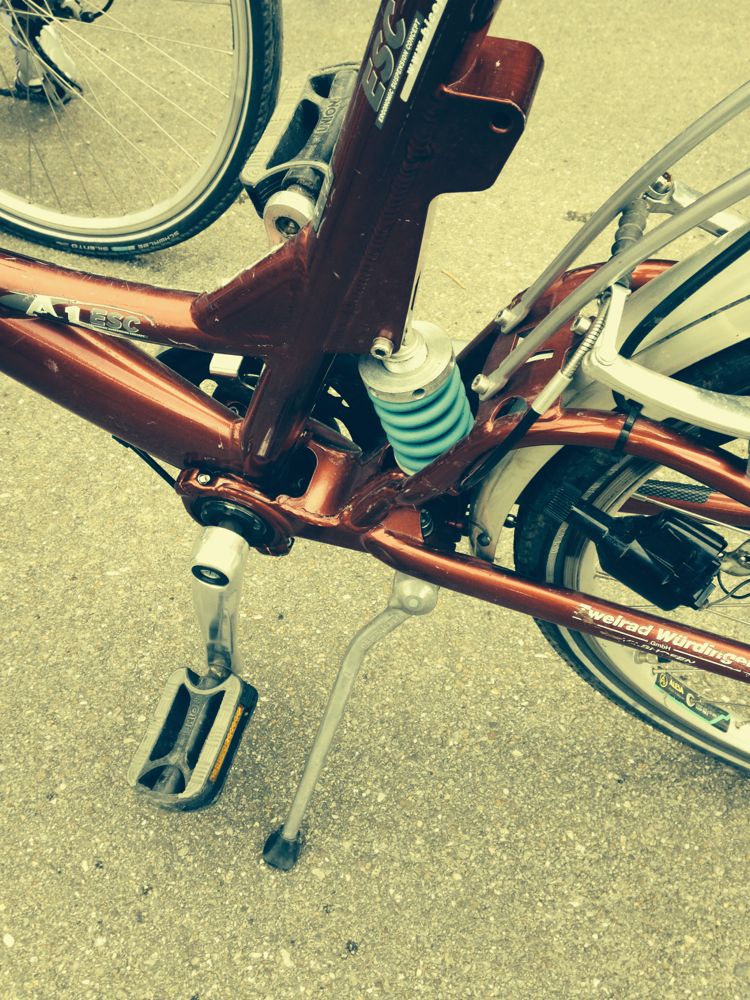