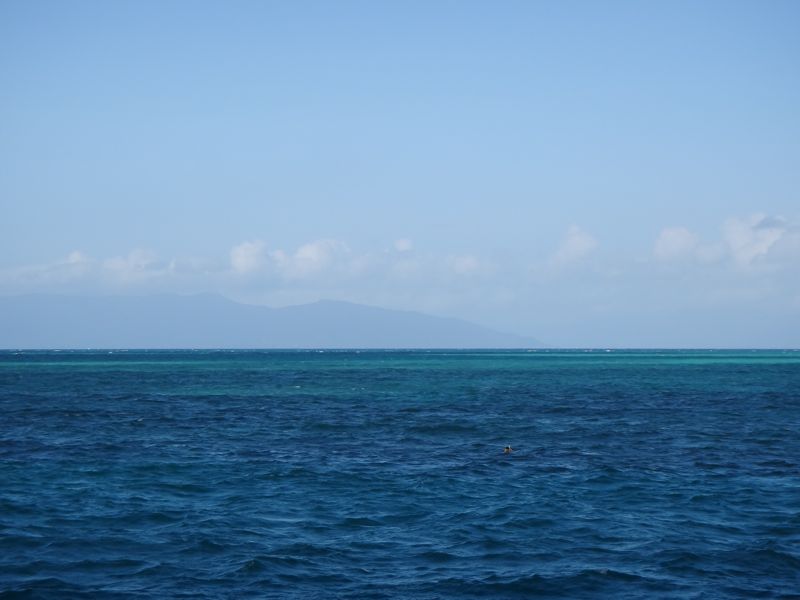 It wasn’t the reef’s fault. It can’t control the endless attention it receives: photos from space, travelogues, reef lore, films like “Open Water”. And it really is completely at the mercy of the weather. And lens filters.

And if one is just talking about size, then, sure, the reef is great. It’s bigger than Great Britain! My experience with the reef – and, granted, we were only together 8 hours – was SO not great.

We arrived in Cairns on Saturday and booked a reef excursion for Monday, giving ourselves some time to play in Queensland and along the north coast. Our antennae should have stiffened when the hotel concierge sought us out at breakfast on Sunday BEFORE 7 AM, (yes, unbelievers, we do sometimes rise early) (and what the heck was she doing there at that hour??) to tell us that the weather conditions were better today than they would be tomorrow because a cyclone was coming and the wind was picking up. (What idiot puts the words ‘cyclone’ and ‘ocean boat trip’ together and doesn’t panic?? Answer quietly to yourselves, please). We obligingly rebooked and trudged, blissfully ignorant, to the dock for boarding. 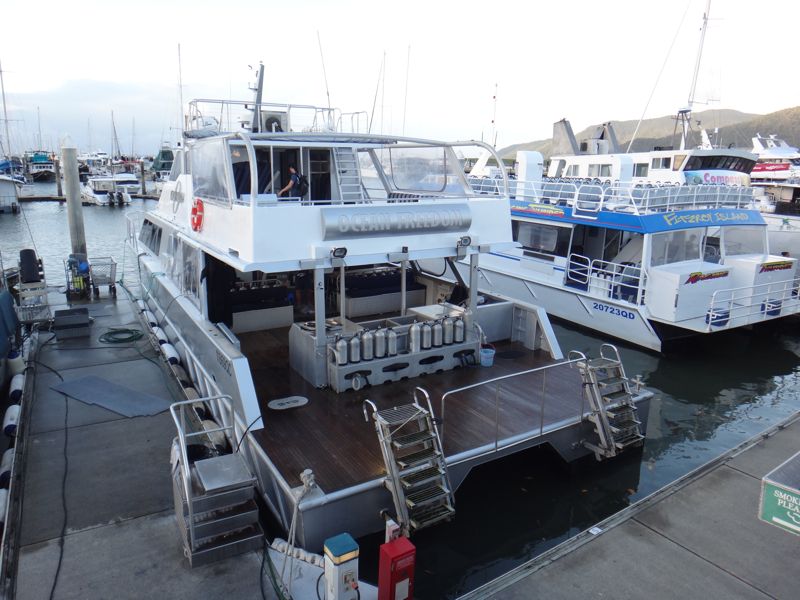 The ship itself (when I look at photos now, my first thought is – well, my first thought is unprintable. My second thought is: ‘what an insanely small boat’) looked seaworthy, if a bit worse for the wear. By 7:30, it was filled with 40 kids in their twenties (more about them later) and us. (Again: “HELLOOO! – what were we thinking???”). The first words out of the captain’s mouth were: “I’m not going to lie to you, it’s going to be rough out there.” yay. “But we all want to go snorkeling on the reef, right??” By the third loud time she asked that question, two people meekly and quietly agreed, so off we went!

Dear reader, you’ve probably read horror stories (or seen movies) about boats full of seasick people. Being among them is an unparalleled sensory adventure. The situation probably wasn’t helped by the fact that most of the kids had likely enjoyed an evening of fun (read: alcohol) the night before – and it was only 8AM when we set off. No need to go into more detail here; just imagine a lurching roller coaster. (Note: we were fine. Must be all those hours spent on rough and tumble Lake Minnetonka.)

After an hour and a half of being tossed about like a bobber, we reached our little ‘licensed area’ of the Great Barrier Reef (GBR). Dang if it didn’t look exactly like the rest of the sea that we’d just experienced – dark and churned up because of the ‘chop’. Only when the sun peeked out could you see the vibrant blues of the shallower areas in the distance. Please note, I said: ‘in the distance’. (See photo at top of this post.) We were supposed to swim there.

As members of the crew wiped ‘seasickness’ off their heads (yeah, most of the passengers were on the upper deck as the crew rushed around, below), the brave and foolhardy donned the appropriate gear and were pushed in. (Let me interject at this point that I don’t know how to swim and have a fear of deep water and really big fish. Why I was out in a boat, in rough seas, for the sole purpose of jumping in deep water with really big fish is one of life’s little mysteries.) 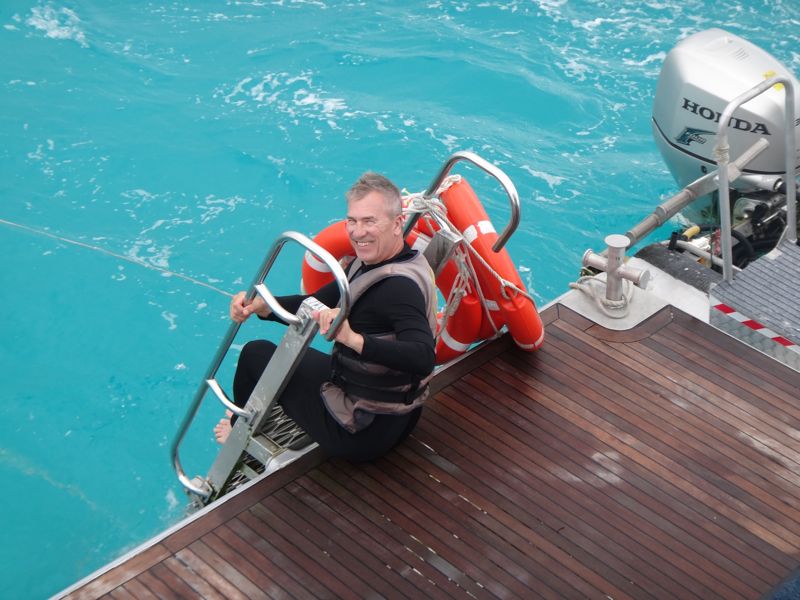 Rog jumped in (I wrote that to make it appear that he was quite brave. In reality, he inched down the ladder. Still, I considered him QUITE brave!) I watched from the upper deck, having decided to ‘sit this one out’ – and to watch his face for signs of serenity, terror or ‘hey, this place is full of fish. And some of them are really big.’ In the course of five minutes, I saw all three signs. And then saw Rog swimming like crazy to get back on the boat as waves pushed him under, filling his snorkel and goggles with sea water and me with fear.

Bottom line: he lived to tell the tale. And I never went in the water. Everyone else reported that there was very little color under the surface – the sea was too churned. Here’s what we saw on a trip in the glass bottomed boat.

And even though I was initially alarmed by the casual count of passengers at boarding (“40?” “I thought I counted 41.” “No, there are 40.” “Wait, now we have 42.”), there was a very serious roll call taken at the end of the day (BEFORE we left the reef).

The boat trip back, as the storm worsened, is a story all its own. But I’ll just summarize: more mass seasickness, times when the horizontal boat felt vertical (and fell back into the water as if it had been) and my respect for the determined nature of these four who were NOT going to go in the cabin for fear of sympathetic nauseousness.

And then there was one.

A few other images from our day at sea: