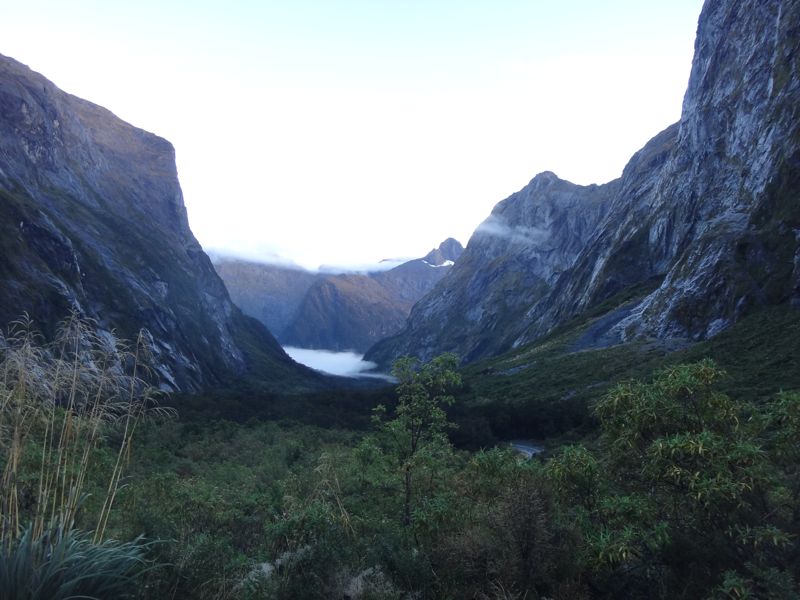 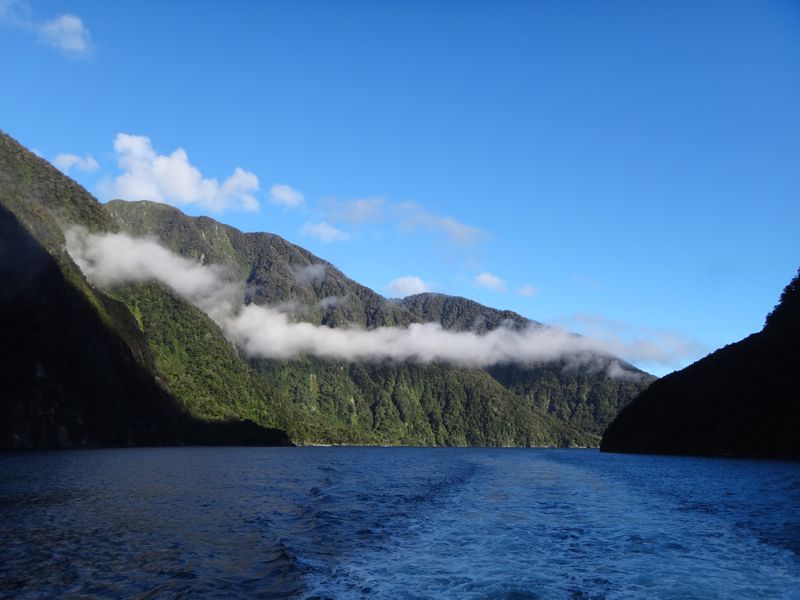 In 10 quick days, we drove from the top of New Zealand to the very bottom, going from North Island to South Island with a four hour ferry ride through the Cook Strait (named after the good Captain, himself) in between.  My positive spin on the experience is that we never needed sun block, sunglasses, or short sleeved shirts. You’ll be interested to know that when it rains in the southern hemisphere, it does so in a counter-clockwise fashion.  (No, it doesn’t.  That’s just as silly as the notion that the toilets flush differently down here.  We know, because we watched.  Repeatedly, just in case of a fluke flush.)

New Zealand is foreign, but not shockingly so.  Driving is on the ‘wrong side’ of the road, signage is much more polite than we’re used to (‘please stop for the signal when requested’ and my personal favorite: “slippery when frosty), people watch the ‘telly’, and the word ‘dairy’ has multiple meanings (although all dairies advertise “cow & gate milk”.  Is that when a cow accidentally gets stuck in a gate and milks all over herself??)

There are far more sheep than people, there are fewer people than live in San Diego and everyone seems unfailingly polite and soft spoken (we nodded a lot and then asked each other “what did she say?” with some frequency).  There is one national newspaper and the news in the United States features prominently (although I’ve loved local articles like:  “Police Seize Weapons from Nervous Dairy Owners” (at first I thought:  revolting cows?  But then remembered: a dairy is a corner store).  The article went on to say:  “Yesterday, police visited some dairies to provide owners with crime prevention advice following two (gasp!) aggravated robberies targeting synthetic cannabis in as many weeks.

“A dairy owner, a victim of a recent aggravated robbery, sold synthetic cannabis to a person while police were speaking to him about the danger of selling the product.”  (italics are mine.)  (fyi – the weapons seized were ‘mallets and large wooden sticks’.  Seriously, you have to love a country where this is front page news.  And where criminals are going to be pulverized with mallets.)  And, on the second page:

“The first public concert in the Dunedin Town Hall in nearly three years may be overshadowed by a mix-up in seating arrangements.  Unfortunately, the seats were sold based on the construction plan and the construction plan was not the same as what was built.”  Building inspector’s report, please!

We’ll now return to regularly scheduled programming:  Auckland was big(gish), characterless and rainy.  Rotorua, one of the major holiday areas in New Zealand (except when it’s raining) and a cultural center for the Maori, was quite sulfurously smelly (due to all the geothermal activity), but contains the lovely Government Gardens and Lake Rotorua.

Tongariro National Park you’ve already read about.  (umm.. rainy.  Except for the skiing.)  Wellington, New Zealand’s capital, is cosmopolitan and hilly and was… rainy.  It’s known for a near-constant, chilly wind.  The government buildings compare, in size, to our state capital buildings, but the beehive styling of the offices of Parliament are cause for quite a bit of ribbing.  Te Papa, the Museum of New Zealand, is located downtown, on the harbor, and has a reputation for its creative interactive exhibits.  It’s worth the trip.  And it’s all indoors so the rain (and chilly wind) affects you less.

North and South Island (the two ‘hunks’ of New Zealand) are separated by Cook’s Strait, ‘one of the most treacherous short stretches of open water in the world’.  I cannot begin to tell you how happy I am that I was unaware of this fact when we boarded the ferry for the four hour trip to Picton.  I’d still be in Wellington, I’m sure.  The ferry company helpfully provides reading material in the passenger lounge describing past trips that have taken up to 40 hours and left passengers deathly ill.  The flat screen televisions in the same lounge were showing a continuous loop of a Discovery channel special on “Unsinkable Ships That Sank”.  Good times.

The drive to Christchurch along the eastern coast of South Island was beautiful – very reminiscent of Hwy 1 in California – and (dare I say it?) rainy.  South Island is an uncrowded paradise; Picton, at the northern tip, is (reportedly) sun-drenched and the center of New Zealand’s wine-making.   Here are some scenes along the coast:

Christchurch is a ‘very English garden city’ (and my favorite among all the cities we visited); on a drier day, we could have punted on the Avon river and spent much more time in their charming Botanical Garden (‘a highlight in a city of gardens’).  The broad avenues that mirrored the City of London are gone, temporarily, but the “Garden City of the World” (so named in 1997) still retains it’s very British sensibilities.  Even in the rain, the Botanic Garden had a sad loveliness:

Further south, Dunedin is a Scottish outpost filled with Victorian and Edwardian buildings that look appropriate in a rain-soaked bayside setting.  An 1860 gold rush inspired the first Kiwi university, medical school, newspaper, and cable car system here.  We spent the night at Larnach Castle, an ornate pile of stone and iron that was built by an egotistical Australian with money to burn.  Dinner was shared with a group of Kiwis at the grand table in the castle’s dining room, our waiter/narrator regaling us with stories of castle life in the early 1900’s and the tragic end of William Larnach, who took his life in a Parliament common room, despondent over an affair between his third wife and his youngest son. (Not THEIR youngest son, thankfully.)

Nothing prepared us for the magnificent mountains of Fiordland; even the low clouds couldn’t conceal them as we drove into Te Anau, the hub of this southern Alpine wilderness.  Like everywhere else in South Island, we shared the tiny town with busloads of Chinese tourists (I’ve been meaning to find out if there are any people left in China); we’ve both picked up some Mandarin through osmosis.

Te Anau is the gateway to a spectacular drive to the sea and Milford Sound, described by Rudyard Kipling (how the heck did he even get here??) as ‘the eighth wonder of the world’.  To get to the Sound, we drove through the 4,000 foot-long Homer Tunnel, hewn from solid rock by five men (!!) who began the work in 1935 using only picks and shovels and living in tents.  It was completed in 1954 – the guidebook says that three of the men were killed in avalanches – no wonder it took so long!   (A future post will include a short play I’m writing about the two surviving men; their hopes and dreams, their petty squabbles.  The self discovery that comes from living together in a tent for 19 years.  Brokeback Mountain has nothing on this story!) 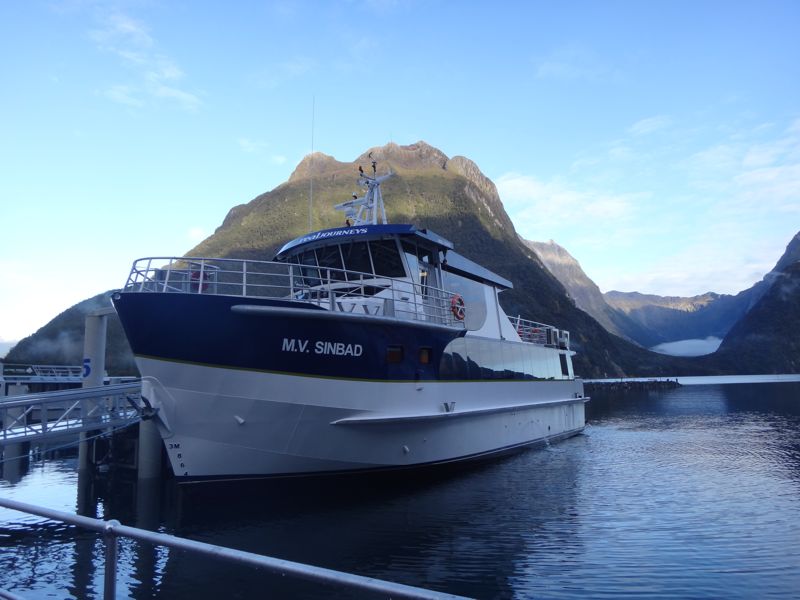 At Milford Sound, we boarded the mighty Sinbad, captained by blind-in-one-eye Dennis (we nicknamed him “Demolition Dennis”), a Kiwi character if there ever was one.  Not only was he nearly blind, but he asked me to stand at the front of the ship and let him know when we were ‘4 metres from the wall of sheer granite’ that he was piloting us towards.  I didn’t have the heart to tell him that we were American and thus not versed in the metric system; we narrowly avoided disaster when other passengers started screaming and I gave him the “okay” signal.  The beauty of the fiords boggles; here are a few photos (and, yes, that blue stuff above the mountains is known as ‘the sky’ – it’s apparently always this color when the sun shines!  In an apparent miraculous event, the sun came out for the 2 hours we were on the boat, and then quickly retreated the second we stepped on land!)

The final stop on our Kiwi sojourn: Queenstown, an alpine village nestled among the wonderfully named “Remarkable Mountains”.  Queenstown is no Aspen, or even most American ski resort towns, but if it’s adventure sports you’re after, this is mecca.   You can bungy (Kiwi spelling) jump, ski dive, hang glide, jet boat, zip line, luge ride, and, I can safely report, we didn’t.  (Notice I said “YOU can”…)  (Although, if it hadn’t been cold and rainy (shocker, I know), we would have definitely gone on the jet boat.  Here’s Rog’s land-based version of jet-boat thrills: 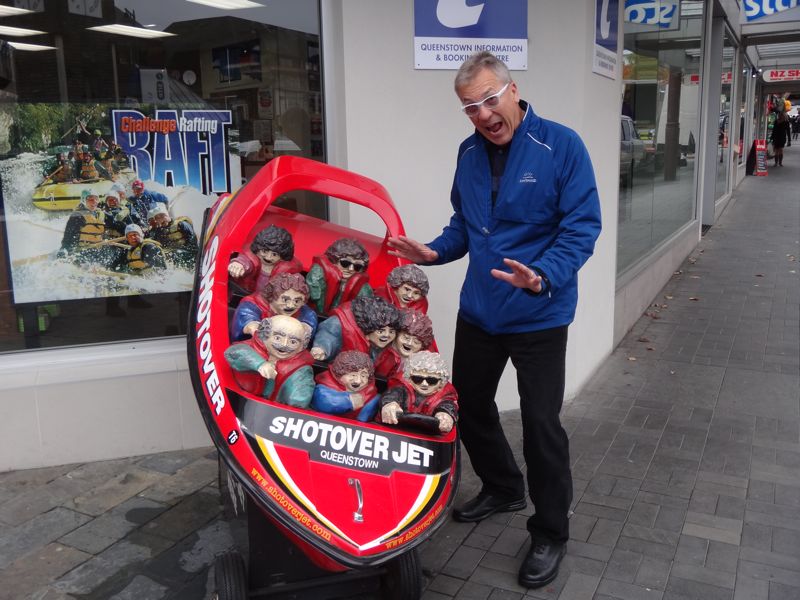 A few other impressions of Queenstown:

And, wouldn’t you know – the very hour before our plane took off for Australia, the sun broke through the heavy cloud cover and dazzled as we took our final look at the autumn landscapes in this gorgeous country.