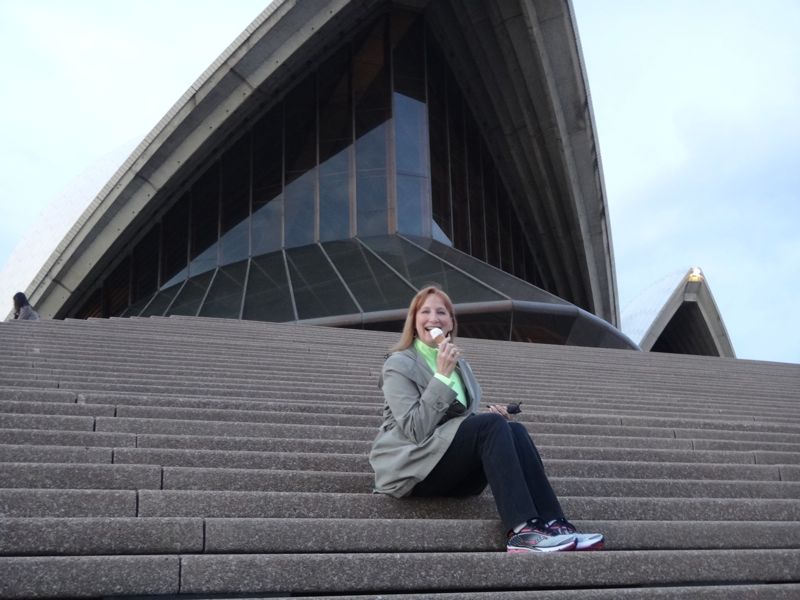 We’ve come almost full circle; we’re back in Sydney because A:  we loved it and B: our flight back to LA leaves from the Sydney airport.  We make our way to ‘the best hotel in the whole world’ again, where Samm welcomes us back like an old friend.  Which we hope he’ll become.

A few attractions escaped our attention the first time, so we boarded a ferry to visit one of Australia’s famed beaches (two of the best are a short boat ride from downtown):  Manly (the other is Bondi – the names are probably familiar).

Yes, it’s a beach.  Yes, it’s on the Pacific Ocean (and so strange to stand there and look out to sea and then a few days later, stand in San Diego and look out at the same body of water that takes FOURTEEN hours to cross).  Yes, there were more surfers there on a late Sunday afternoon than we’ve seen on many other popular beaches.  But… gosh, we live in a beautiful country.

Another item on our agenda (and when I say “our”, I mean “Roger’s”) was to sample kangaroo pizza, or “Coat of Arms” pizza, as it’s popularly known.  So called because it contains the meat of both animals that are on the Australian Coat of Arms – the kangaroo AND the emu.  Samm sent us to a convivial and atmospheric pub, “The Australian”, where I had an everyday  “Chicken Tikka Pizza” (yes.  So?) and Rog gorged himself on the most exotic pizza he’s ever eaten.  (His take on it:  “Tastes like kangaroo.”)

Sydney had captured our hearts and it was going to be hard to leave, not knowing if we’d ever be back.  We walked the city and the harbor on that last night, bewitched again and again by the views of the Opera House and the glittering destinations across the bay.  We kept telling ourselves to head back to the hotel and start packing, but this beautiful city has an irresistible pull. 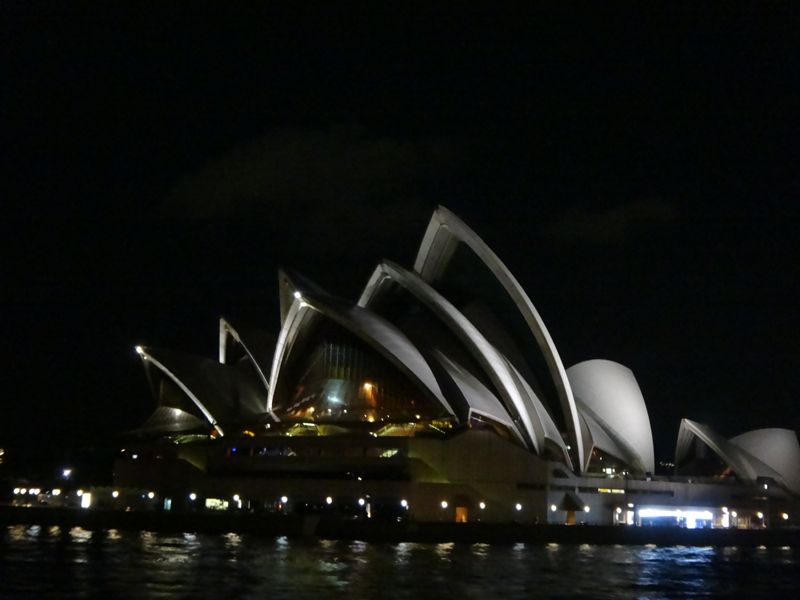 We talked about how lucky we are.  To be able to see countries like this, but also to have found each other.  That night, I received an email from my nephew, John.  It touched my heart and seemed like a perfect way to end this adventure.  Reprinted here with his permission:

Kitty corner across the circular quay from your hotel is an ice cream place called Gelatissimo. It is my favorite ice cream place in the world for reasons I will now explain.
In 1999, I came to Australia for the first time on a business trip. The last night of the trip, I came across that ice cream place. I bought an ice cream and walked to the Opera House and ate it. I sat there with such great pride that the son of a Detroit cop was eating ice cream at the Sydney Opera House.
For years afterward, on every trip to Sydney I would have ice cream there. I would also send an e-mail to Carol and, as they got older, my sons on every trip that would say “guess where I am having ice cream”. They always laughed about that highly predictable e-mail.
In 2006, I brought my whole family to Australia. We went to Melbourne and Canberra first but everyone knew that when we got to Sydney, we would be going to my favorite ice cream place in the world.
We arrived in Sydney and checked into the Shangri-La. We ate dinner at an Italian place on The Rocks. And then the big moment arrived -time to go to Dad’s favorite ice cream place in the whole world.
We did. The kids enjoyed the ice cream though I doubt they felt that it was the best in the world. But, even at the ages of 11 and 9, I think they understood why it was so special.
Even now, to this trip, I get an ice cream at Gelatissimo and sit by the Opera House and send them an e-mail that says nothing more than “guess where I am having ice cream.”
Enjoy Sydney, daughter of a train mechanic from Detroit.
Love, John

And when we left for the airport the following morning, Sydney had a little goodbye gift for us…