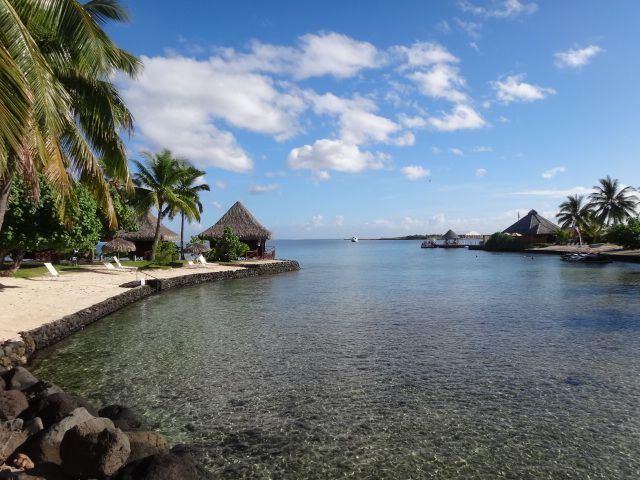 They say getting there is half the fun.  “They” haven’t traveled through LAX at midnight.  Los Angeles International Airport is like a reverse Disneyland.  The happy, helpful characters in cute costumes at Disney have been replaced by grumpy ‘characters’ in disheveled costumes who dispense unhelpful advice and wrong directions at every turn.  The hundreds of ‘guests’ waiting patiently in line for thrilling rides at Disney transform into hundreds of ‘passengers’ who have turned waiting into a contact sport for rides that are sure to be thrilling for all the wrong reasons. If getting there is half the fun, we’re in trouble.

At 5:15 AM, our plane touches down in Papeete, the largest city on the island of Tahiti.  It’s still dark and the night time breezes lure us off the plane with their tropical scent.  (I wrote that sentence to make myself feel better.  When we stepped off the plane onto an unprotected stairway with shaky handrails, we were met with 85 degree air, 95 percent humidity, a blast of jet fuel and a little Tahitian dancer and her ukelele’d accompanist.  We inched down the stairs, juggling all of our carry-on luggage.  Walking on sleep-deprived legs. And  still wearing winter clothes.  Disney should make THIS a ride.)

While waiting endlessly for the four desultory passport control agents to clear the passengers on 2 jumbos that arrived simultaneously, we gingerly (and forcefully) tried to clear a path for a rather large crab that was insistent on biting people shoes.  Welcome to Tahiti!

We’re only spending one day in Tahiti, based on everyone’s (good) advice.  To wile away the nine (!) hours til we could check into our hotel, we booked an island tour that hits the five highlights of the island.  I won’t list them here – the pictures will more than suffice.  Seven sweating, frizzy haired, shiny-faced travelers boarded a mobile oven (sorry, I meant  ‘bus’) for the three hour tour.  (It was actually a four hour tour, but you do remember that phrase from the ominous theme song to “Gilligan’s Island”, don’t you?)  Thankfully, one of our fellow passengers was an avidly curious grade school teacher with ADD.  I don’t need to spell that out, do I?

The day was ultimately redeemed by the views from our room at the Intercontinental Resort Tahiti (highly recommended if you’re a person who enjoys bad service) and a romantic dinner at Le Lotus, located on a jetty where we watched baby shark scurry for breadcrumbs in the underwater lighted bay.