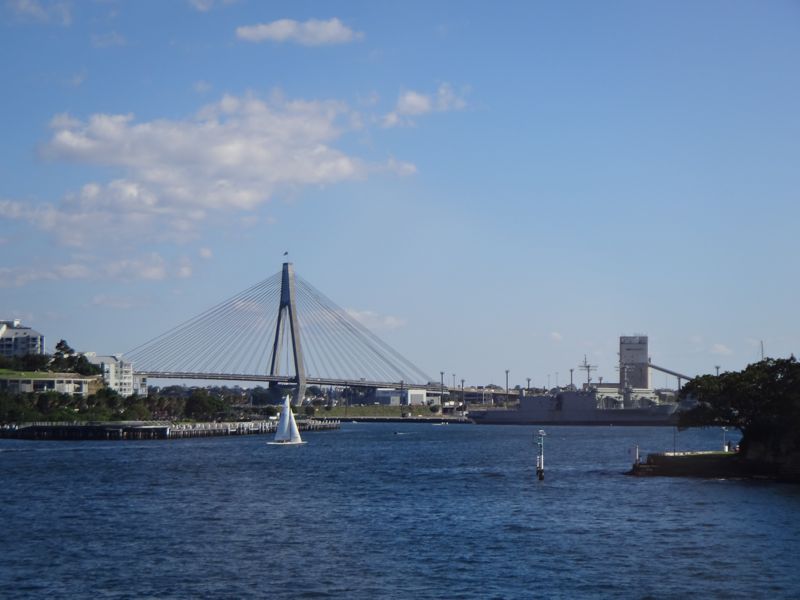 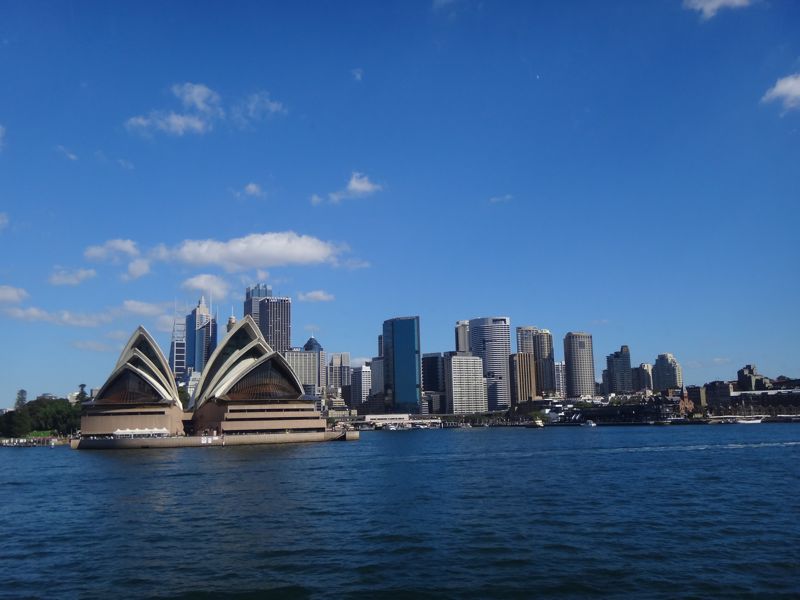 We arrived at dusk and slowly circled the city at 1,000 feet. Even in the quickening darkness, the guidebook was right: ‘flying into Sydney has to be the finest introduction to Australia imaginable.’ The view was breathtaking. We couldn’t wait to land. 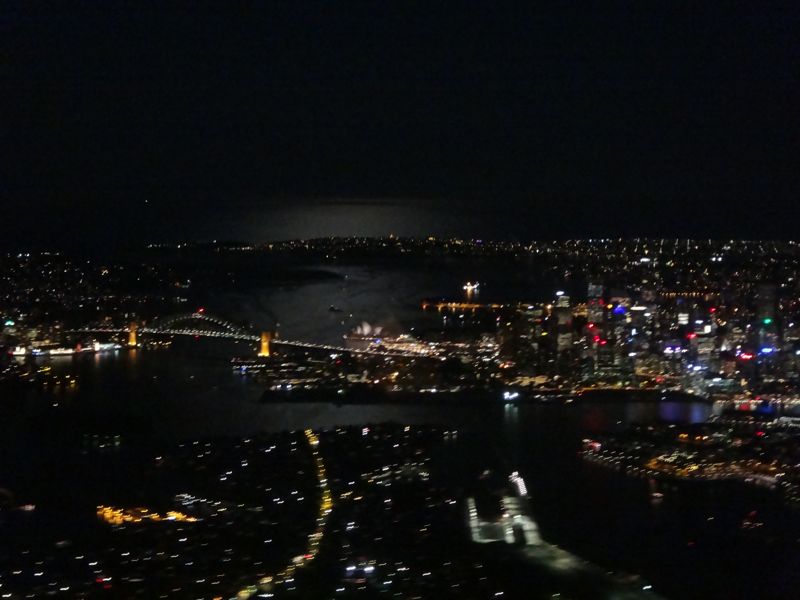 We breezed through passport control and customs (friendly immigration officials! Imagine that!) and got in line for a cab. (Note: cabdrivers the world over are reluctant to help with luggage. They tend to look, with interest, at the inside of their trunks, as if they’ve never seen them before. Then they look at you with a ‘now, what?’ expression on their faces. This wouldn’t be a huge issue, but we travel with luggage the size of a Volkswagen bus. A little help is most appreciated.)

Once we settled our luggage and ourselves, we told the driver our destination: the Park Hyatt hotel. “Where?” he asked in an accent I’ve truly never heard before. We repeated, he repeated and this went on for some time until Roger got out of the cab and asked for assistance from the ‘cab czar’ who, amazingly, was no help either. The twinkly and inviting view of the city that we had from the airplane was quickly fading from memory.

We produced a street address and the driver lit up and said, accusingly, “Ah, Hyde Park!” Well, no. But what the heck, just get us into the city. He ambled out of the cab line, got to the freeway and gunned it. We heard an interesting whooshing noise and then a car pulled up next to us, attempting to keep up, while its driver yelled: “your trunk is open!” (We were in a station wagon. The lift was wide open. Our luggage was on the verge of sliding out the back and decorating the Sydney freeway.) I really, really wanted another cab.

The situation improved upon arrival at the hotel. If you are traveling and don’t care where you go but just want the best hotel experience you can possibly imagine, go to the Park Hyatt Sydney. And ask for Samm, who, we feared, would stop at nothing to ensure a memorable stay. Fortunately, given the amenities at the Park Hyatt, including this little gem in the bathroom, Sam was able to focus on his front desk duties and remains, as far as we know, the most genial, professional and charming hotelier in the history of the Hyatt chain. 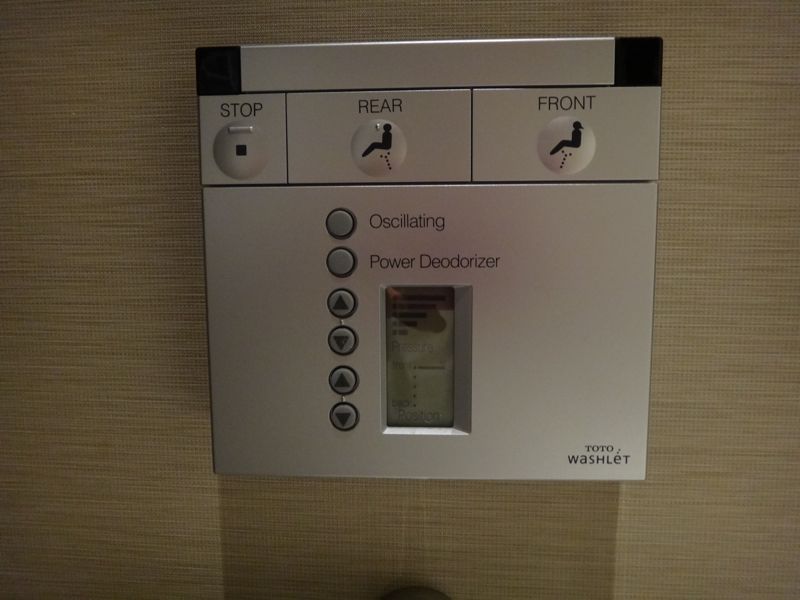 The  next morning, I was up before sunrise, working away at my little blog, when I stepped outside onto our balcony and was greeted with this: the Sydney Opera House tinged pink in the morning glow. A day with sun! In one of the most beautiful cities on the planet. Things had definitely improved. 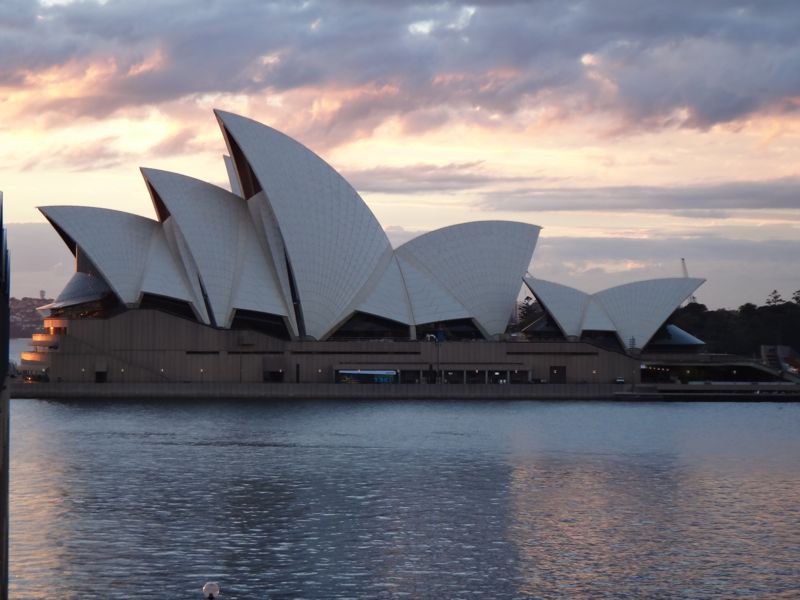 The Sydney Opera House is the focal point of Port Jackson, the official name of Sydney’s gorgeous harbor. It’s said that even the convicts cheered when they first glimpsed the harbor in 1788, although the cheering probably stopped soon after. We could have spent our entire time in Sydney on the Circular Quay, the bustling and beautiful semi-circle that includes the Opera House and is filled with ferries coming and going at an amazing clip. Here are a few views of the Quay from the Opera House – and, yes, it was generally this crowded.

We’re fortunate to have friends in Sydney; we joined them on a luncheon harbor tour with Captain Cook’s Cruises. Trying to focus on food and friends while ignoring the dazzling sights around us was nearly impossible. I lost part of the battle and here’s why:

We were on the water frequently during our three days in Sydney (which, I should note, is not nearly enough time to spend here. Fortunately, we’re returning for a few days before our flight home). The ferries are cheap, run like clockwork and, in some cases, are the only means for commuters to get back and forth to work.

Aussies have a reputation for openness and friendliness; we found this to be spot-on. I can’t think of a single interaction we had that didn’t include some question about where we were from, how we were enjoying Australia, what cities our itinerary included and a final ‘don’t miss (fill in the blank) while there’. We felt like warmly received guests.

Here are a few more highlights from our time in Sydney: