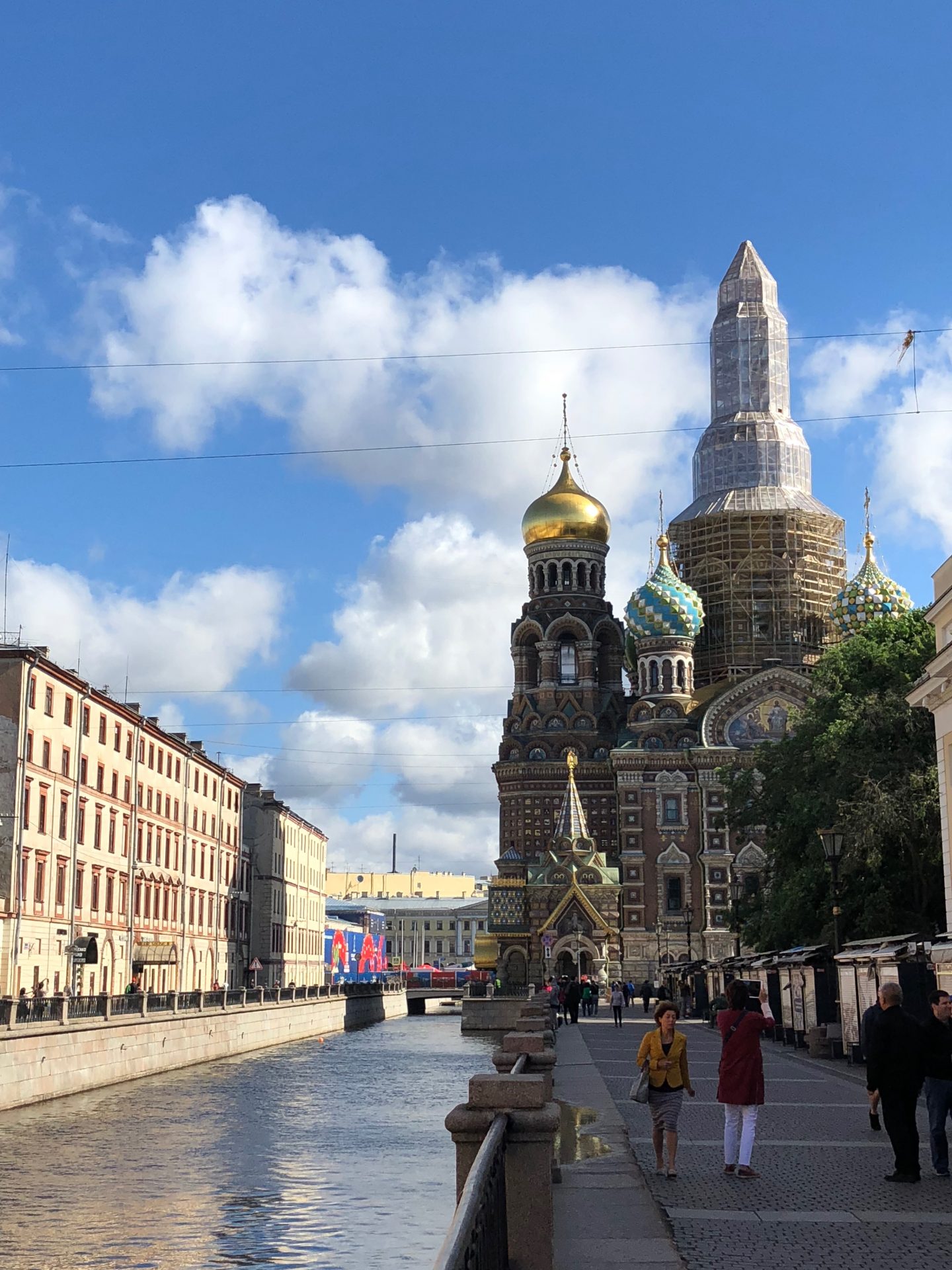 The Venice of the north.  Peter the Great’s greatest hit.  Leningrad.  Petrograd.  Second largest Russian city after Moscow.  Russia’s cultural center.  Hero city of WWII.  We were finally in Russia!

Here’s a short history of fascinating St. Petersburg:  In 1700, all the land that is now St. Petersburg was a swamp.  Peter the Great wanted access to the Baltic sea, so he had slaves hand-fill the land and build canals.  Millions died.  The city flooded all the time.  The wooden buildings burned repeatedly.  The mosquitoes were unbearable.  He moved the capital from Moscow to St. Petersburg and changed the official language to German.  The city was finally a cultural, political and architectural success.  Then came Catherine the Great and French was fashionable for a bit. Culture thrived.  Aristocracy was all.  After the Napoleonic wars (1810-1815), the Russian language was revived.  Free speech was censored EXCEPT for writers of fiction which helps explain “War and Peace”, “Crime and Punishment” etc.  Tolstoy, Dostoyevsky and other Russian greats were the pundits of their time.  In 1917 the Bolsheviks revolted. The Tsar and his family were killed.  Years of horrible things happened culimating in the Seige of Leningrad (as the city was then named) in 1941.  Nazi troops surrounded the city for 29 months and cut off all supply routes.   Millions died again – most from starvation.  In 1945, Leningrad was named a “Hero City” for the resistance and tenacity of the survivors.  Then Stalin and more horrible things.  Poor Leningrad!  Which brings us up to the present era:  In 1991 residents voted to restore the name St. Petersburg once again.  Whew!  (The ‘horrible things’ could go on for pages and pages.  Click here if your life is just too happy and you need a dose of depression.)

Being a child of the ’50s and ’60s, I was susceptible to all of the “Big, Bad Wolf” propaganda (I’m not saying that much of it wasn’t true – see above!) regarding Russia, so I was very curious (and somewhat cautious) about actually setting foot on Russian soil.  I expected everyone to look like this: 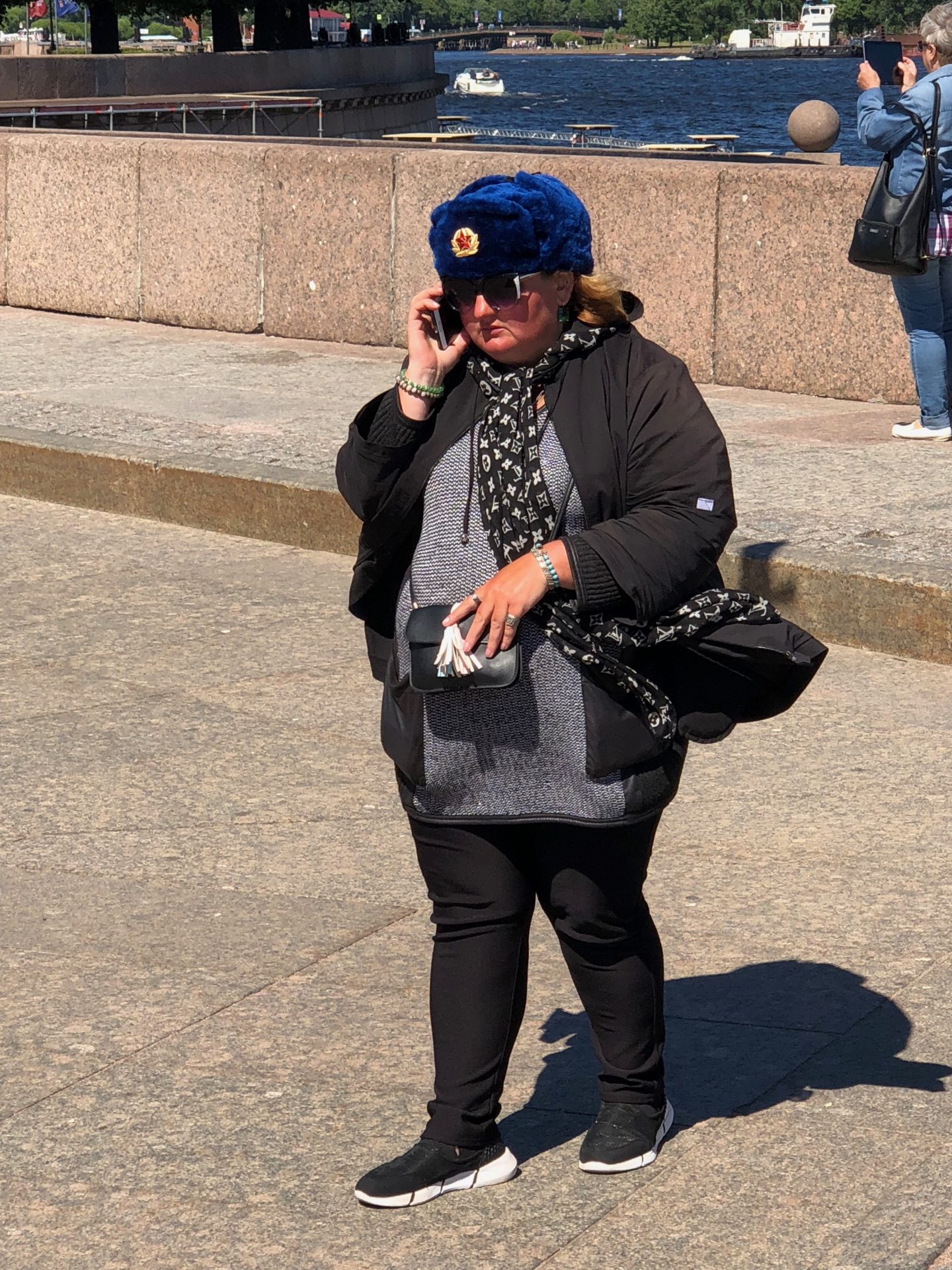 (minus the Nike shoes, Louis Vuitton scarf and cell phone, of course) and for there to be KBG agents speaking into their wrists and tracking us as we travelled around St. Petersburgh.  Aside from not being encouraged to wander around the city (wandering around, on your own, required a different visa than the one we held), we felt very comfortable in St. Petersburg.   Russian people were dressed in ‘American’ fashions, hordes of people were shopping and everyone in St. Petersburgh looked prosperous and productive.  (Our guide assured us that 85% of the people own their own homes (or apartments) and that 75% of those people ALSO own a country home.  Color me skeptical.  Our guide, the little fireball Natalya, was a hoot – especially when she was poking fun at Putin!  Her ‘shtick’ was better than most late-nite TV talk show hosts.)

When in St. Petersburgh, you WILL visit palaces.  And once you see just a handful of the most ‘popular’ palaces, the revolution of 1917 will make perfect sense.  (Yes, I realize there’s lots more to the story of the Bolshevik revolution than gilded palaces vs. peasants – please don’t get your ‘history shorts’ in a knot!)  Palace fatigue (or Palace confusion) occurs almost immediately.  Science has shown that the brain can process only SO many mirrored ballrooms and curvy Louis-The-Whatever furniture before a Rasputin-like dementia sets in. There’s no ‘life’ in these buildings; they’re deader than their previous inhabitants.  (It’s my belief that if you’ve seen one European or Russian palace, you’ve seen them all.  So, go see Versailles (or The Hermitage) and save yourself a lot of time and effort on subsequent trips to Europe.)  I squandered a mountain of digital memory on palace photos, so I’m GOING to share them with you:

Have you seen enough?  I know I have!  (If you have questions about ANY of the above photos, please leave me a comment and I’ll make something up about which palace it was and why we were there.)

We were fortunate to visit Russia during the 2018 World Cup; the sight of sombreros (Russia played Mexico the night we arrived) among the onion domes was hilarious and confusing.  Between games, excitement ran high when soccer fans from around the world flooded the streets and carried the colors of their teams into every palace, museum and 7-11 (yes.  They’re everywhere too.).

We enjoyed the requisite tourist lunch at the restaurant in the photos below; it wasn’t as ‘kitschy’ as some we’ve ‘enjoyed’ in the past:  the entertainment was entertaining (accordians!  I LOVE accordians!), and the food was plentiful and ‘authentically’ delicious!  The owner of this restaurant has reportedly made a killing in tourist lunches (but hasn’t killed any tourists) now that travel to Russia has gotten easier.

We couldn’t wait to get to the Hermitage, although waiting is mostly what one does there.  The second largest art museum in the world, it was founded by Catherine the Great in 1764 when she purchased 225 or 317 (who’s counting?) paintings from a German merchant who had assembled them for Frederick the II of Prussia (and he refused them!  Not enough Rembrandts, too many Rubens perhaps?).  C the G continued to amass art throughout her life and the museum, which opened to the public in 1852, now contains over 3,000,000 artifacts (although, as we raced through the galleries, I counted only 2,678,000). We weren’t allowed to linger in front of the old masterpieces (the crowds were staggering! and pushy!) but we could linger in what I call the ‘repetitive’ portrait rooms.  The walls in these galleries were stacked floor-to-ceiling with portraits by a single artist.  The artist below used just a couple of models and painted them in various moods and clothing – they were all exquisite. 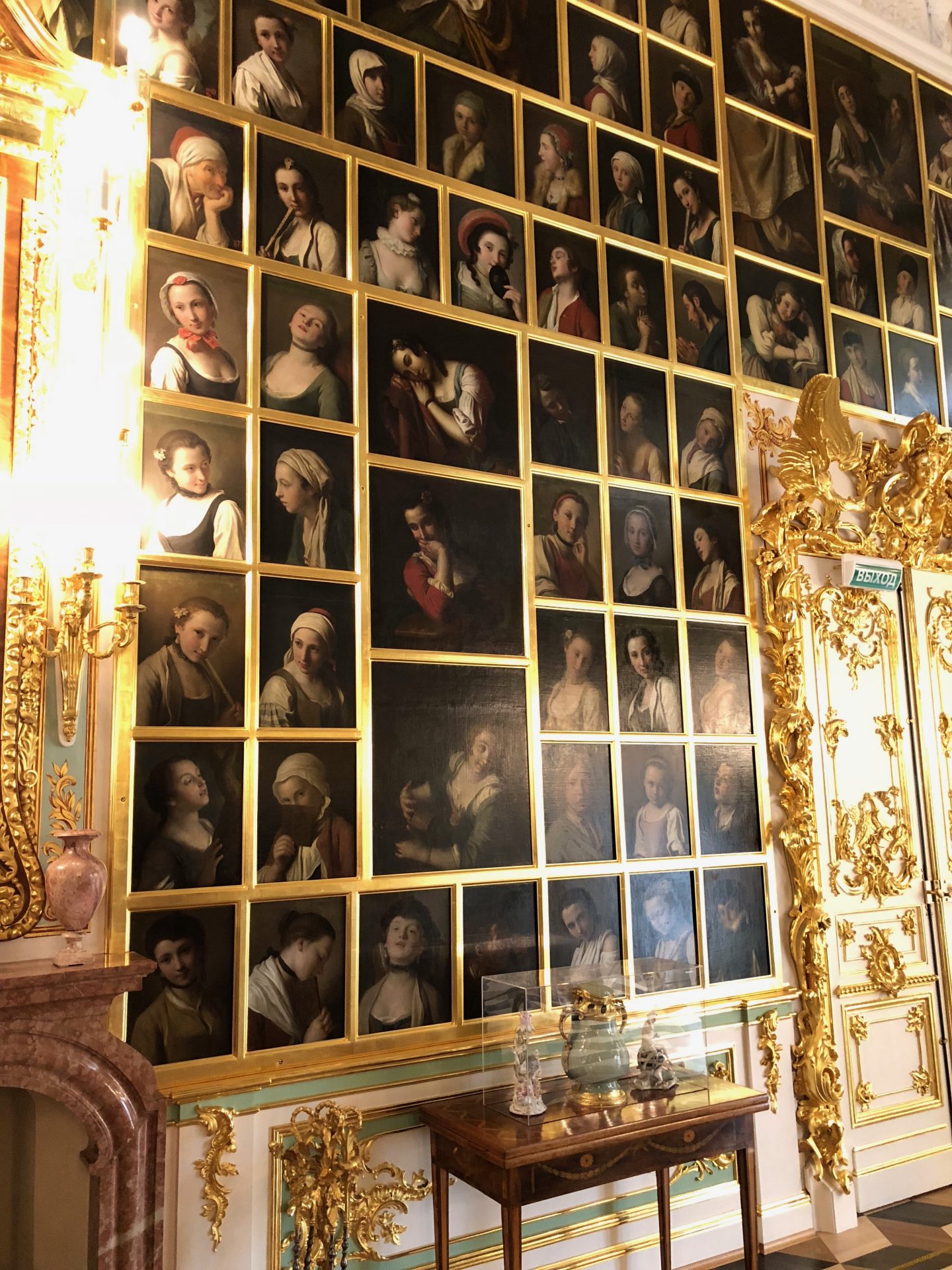 In another room were hundreds of military portraits, again painted by just one artist.  Each is beautifully rendered and full of personality.  I could have spent hours exploring the ‘story’ told in each and every portrait.  But it was time to push on (literally).  Below are a few close-ups:

One day spent in The Hermitage left me wanting.  We inquired about returning during the ‘slow’ time only to be informed that it’s ‘slow’ during February.  (oh boy!  St. Petersburg in February!)  The museum attracts nearly 4 million visitors annually; 2 million were there the same day we were (and I stand by that number!).  We’d love to return; despite my dissing of palaces, The Hermitage and the splendors within should be on everyone’s bucket list.  Just don’t try to see it in a day.

On our last evening, we attended a ‘typical’ folkloric show where photos were NOT allowed.  It’s too bad because seeing young men performing the prisyadka (the kicking dance) in person was quite astounding (you’ve seen them on TV, right?).    The performers actually stopped the show when they saw one camera appear (No, not mine!), so I was taking no chances.  Instead, here’s the theater exterior: 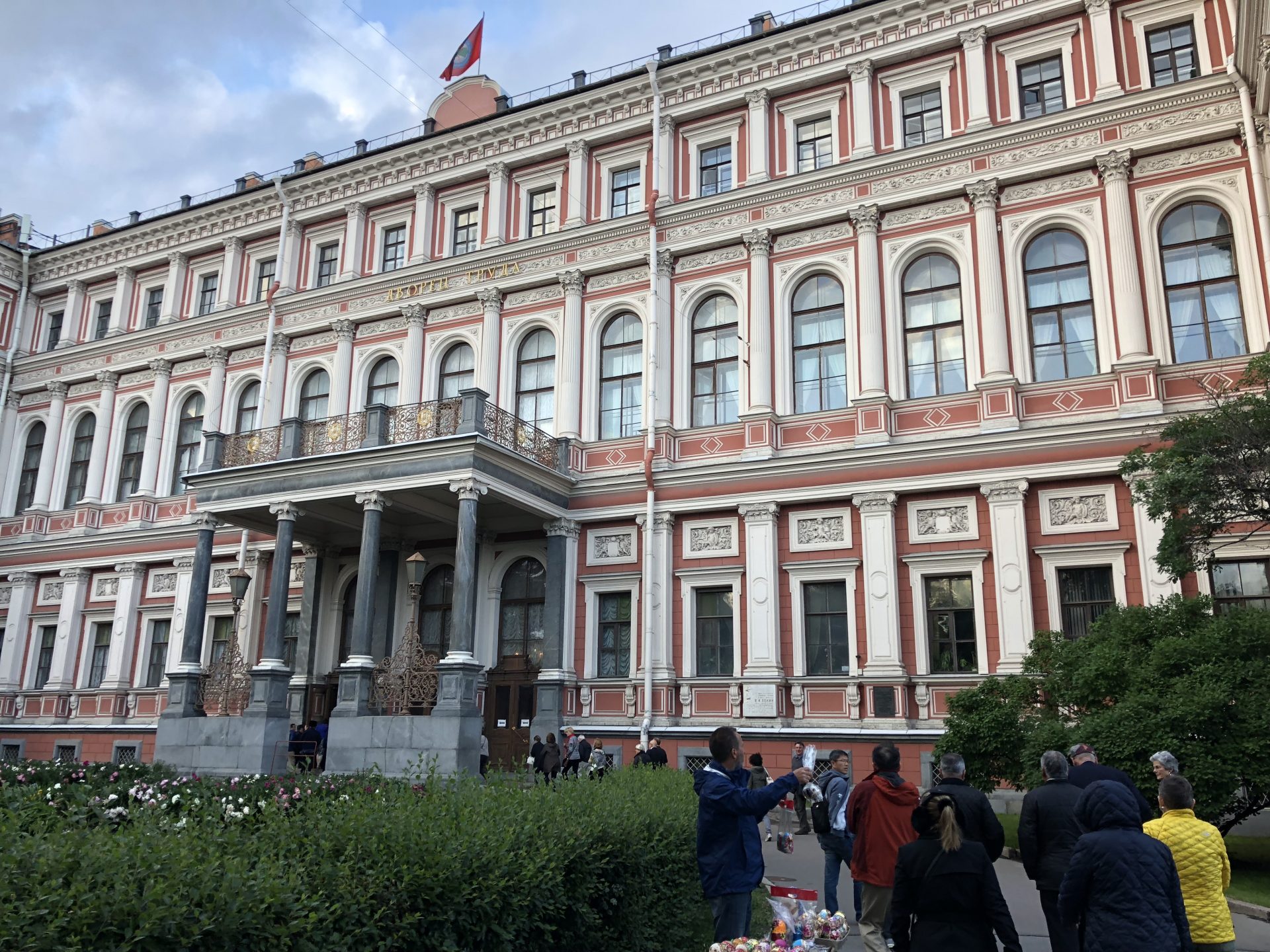 and here are the ushers confusing everyone with their pretty French finery.  (Did I mention that during much of the 17th, 18th and 19th centuries, Russian nobility tried to emulate the French as much as possible?  They considered everything French to be the height of civilized culture – to the point of speaking French instead of Russian in everyday conversation and hiring French tutors to educate their children.  Hence the costumes:) 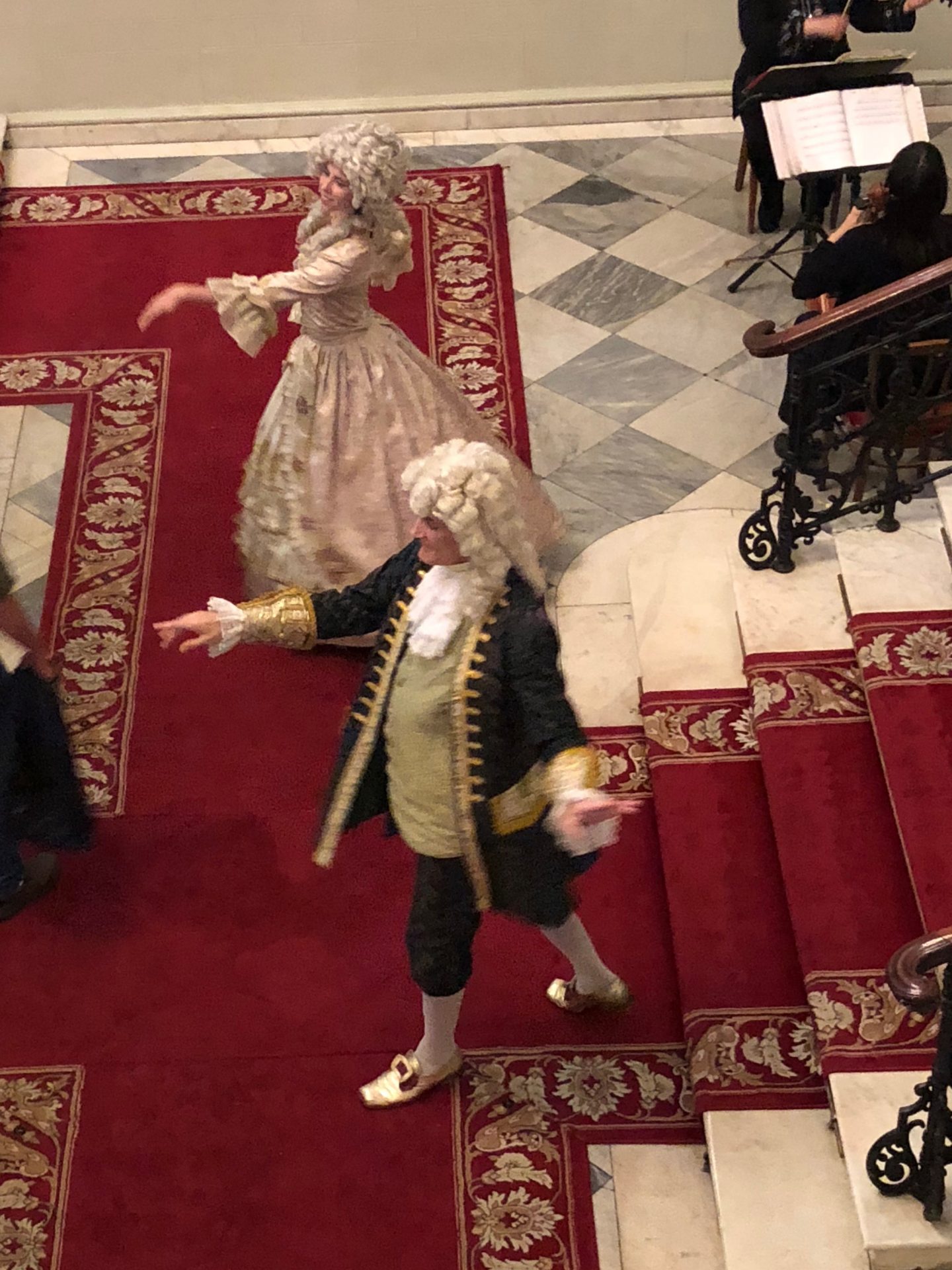 In early summer the White Nights are in full swing, making it difficult to return to the ship late in the evening with the sun still shining.  Since we didn’t have ‘wandering tourist’ visas, we had to content ourselves with viewing the shimmering city from afar.  No midnight photos here, but instead some Russian street scenes:

As our ship sailed out of St. Petersburg, this landmark loomed into view:  the iconic (and somewhat frightening) Gazprom building, Lakhta Center.  Tallest building in Russia, tallest building in Europe.  I’m guessing Putin loves it! 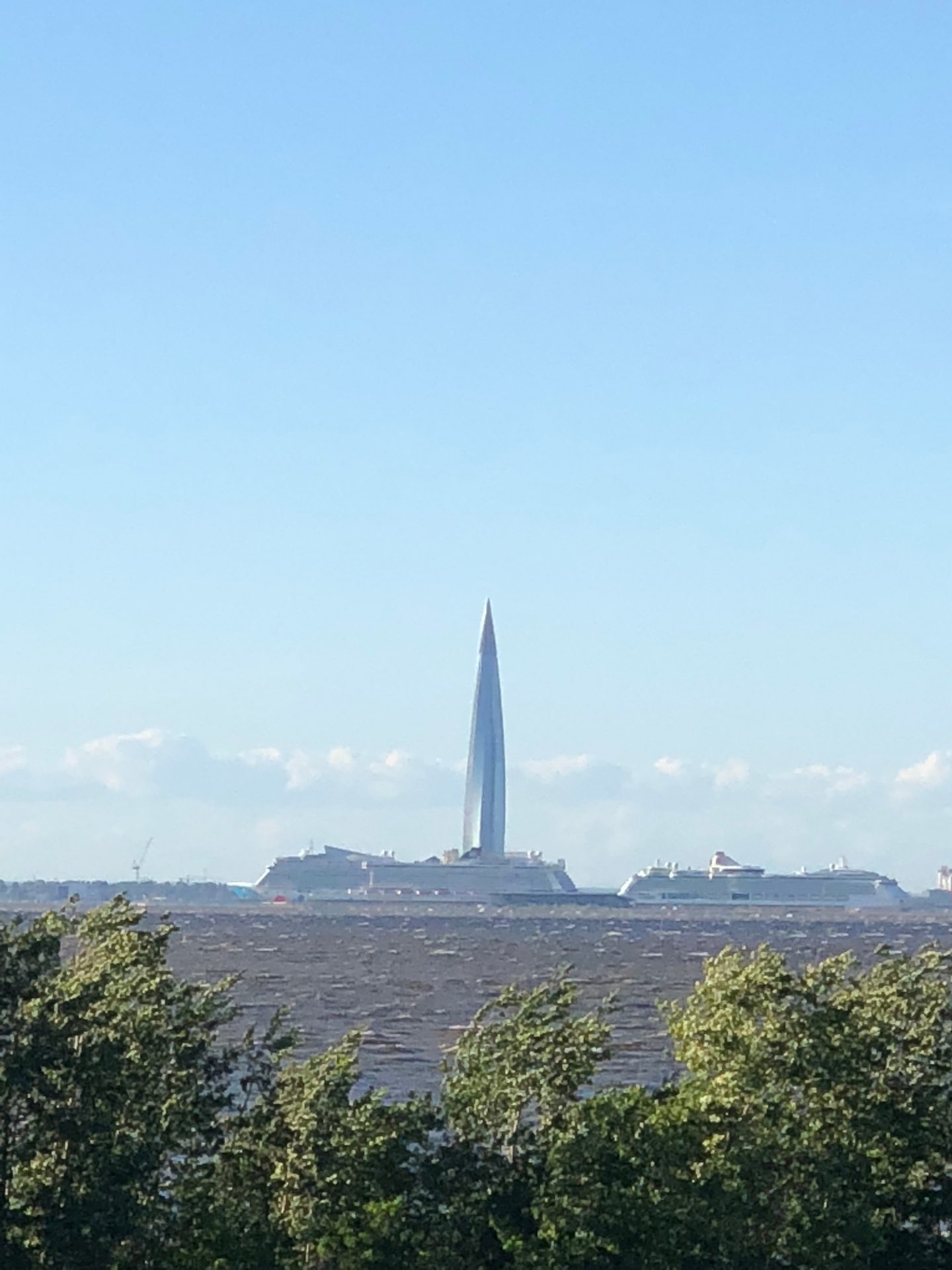 Hang in there everybody!  We’re almost done!  Little, adorable Helsinki is all that’s left.