Phnom Penh.  Pol Pot.  The Khmer Rouge.  The Killing Fields.  And… Angelina Jolie.  Being a child of the ’60’s, that pretty much encapsulates everything I knew about Cambodia before this trip.

Full disclosure:  The next 14 days were spent on an Oceania  Imperial Awakening Cruise, or ‘tourism lite’, as I like to refer to it.  Cruising was a great way to see SE Asia without continually packing/unpacking, but the onshore excursions kept us somewhat insulated from authentic local experiences.  The upside:  we now know the places we’d like to return to and explore more fully. 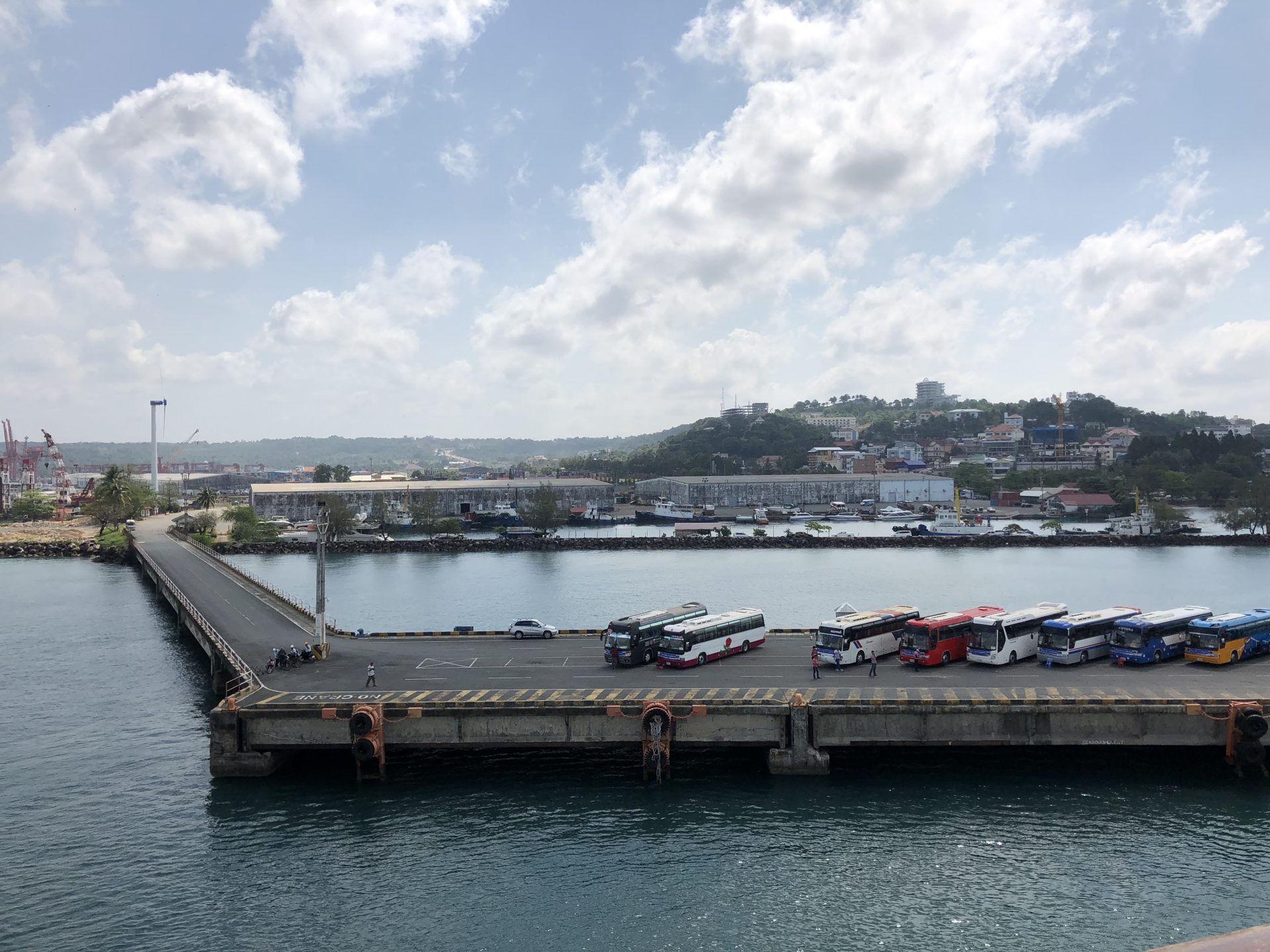 Sihanoukville didn’t exist in 1954.  It was carved out of the jungle in 1955 to provide a deep water port for Cambodia after losing access to Vietnam’s Mekong Delta.  Given that I’m 2 years older than this city, I must say it’s not aging well.

We had 11 hours to try to see (and understand) this corner of Cambodia. 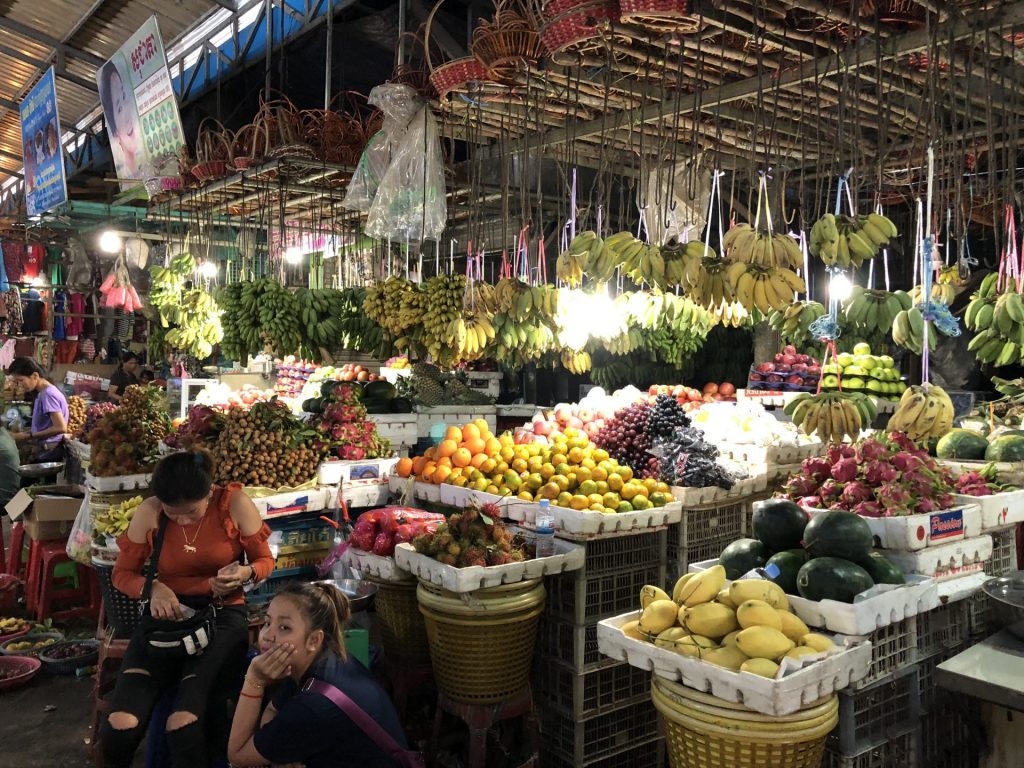 Our first stop was at the Central Market (which looks rather festive and colorful in this photo, no?)  This enormous market sits under an acre of metal roof;  the heat inside was stifling.  Numerous stalls stood shoulder-to-shoulder with barely room enough for an adult to walk down the aisles between them.  Every stall was chock full of merchandise – produce, clothing, fresh and dried fish, meat, gold jewelry – but there was no one shopping.  Maybe Tuesday wasn’t market day?  With no refrigeration and no shoppers, we had to wonder what was going to happen to the abundance of seafood and meat in the stalls.  Especially since hungry-looking people lingered nearby.

Everywhere we went, our vehicle was greeted by impoverished young women, most holding babies, all surrounded by little children who would hold out their hands and make the universal “Unnnnhhhh” sound.  We were cautioned not to give money.  We did, anyway – their little faces couldn’t be ignored.  I wasn’t quick enough to capture a photo of the little girl who, when handed a US dollar, reacted as if she’d just won the toy lottery, squealing and running off to show her mom.  I wanted to empty our bank account.

Next was a visit to a temple that is home to over 200 monks… and many, many tombs.  It was astonishing to see the opulence of the temples AND the tombs in contrast to the poverty we saw on our drive there.  Ancestor worship, or veneration,  is an ancient tradition that is very much alive in Cambodia.  Families build opulent tombs to honor their dead and to assure that they will look favorably on those still living.  The tombs resemble small temples: (the dead look wealthier than their living descendants in this town)

To achieve balance after seeing the ‘lower’ Wat, we had to visit the ‘upper’ Wat, where only a few monks (and many, many monkeys) live in comparative splendor.

The little monkeys were quite curious (and quite fast – all my monkey photos were blurs except this one – and he looks like a cat): 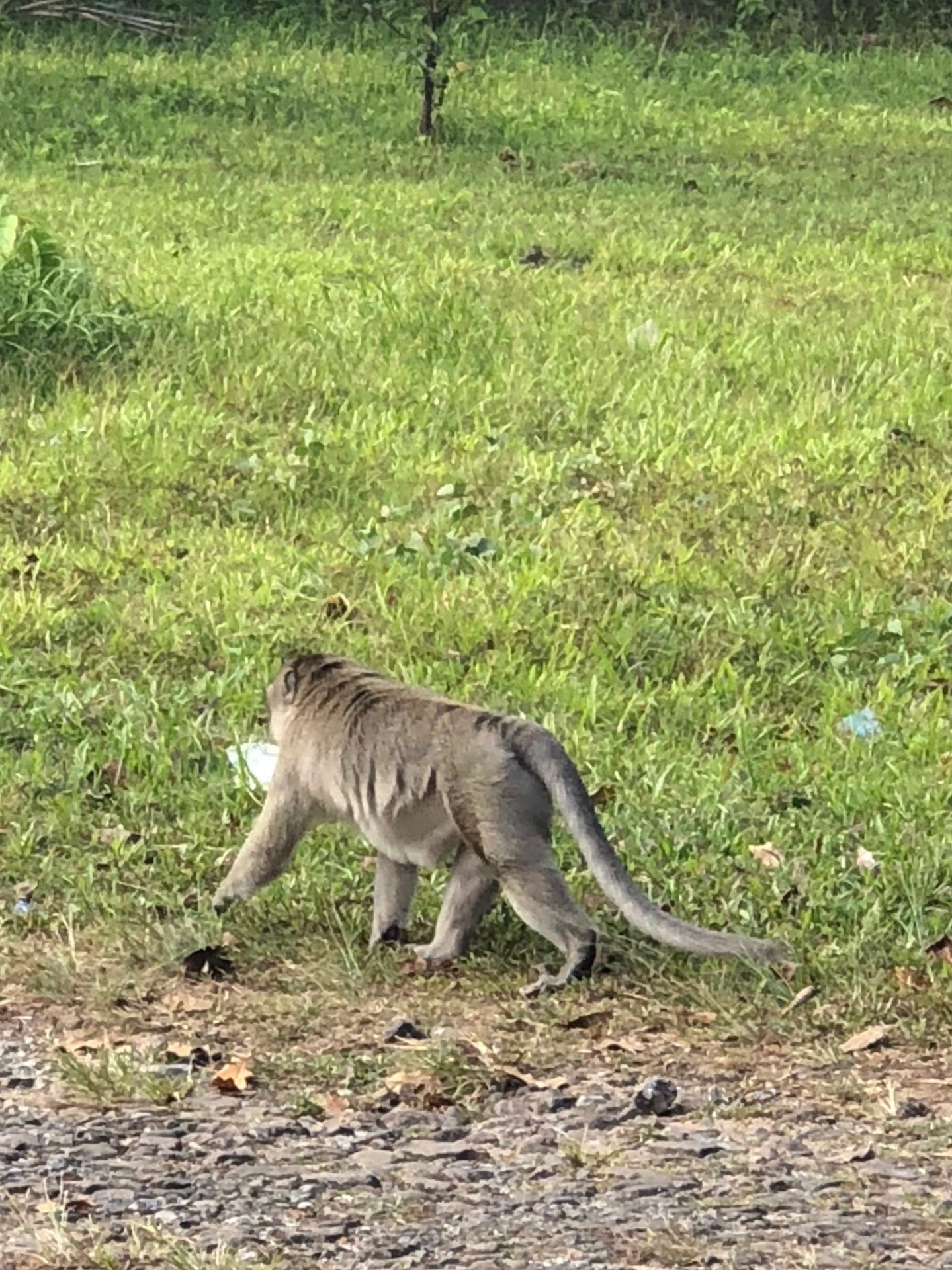 – they’ve been known to grab a tourists’ iphone and retreat high into a tree to take selfies (if the internet is to be believed).  You’ve all seen this, right?

We were curious about Cambodian neighborhoods; Sihanoukville is not a large town;  a short drive revealed interesting disparities:

Or there would be streets and streets of colorful, recently built ‘townhomes’

While stopped at the one red light in town, this enterprising woman was doing a brisk business in filled dumplings: 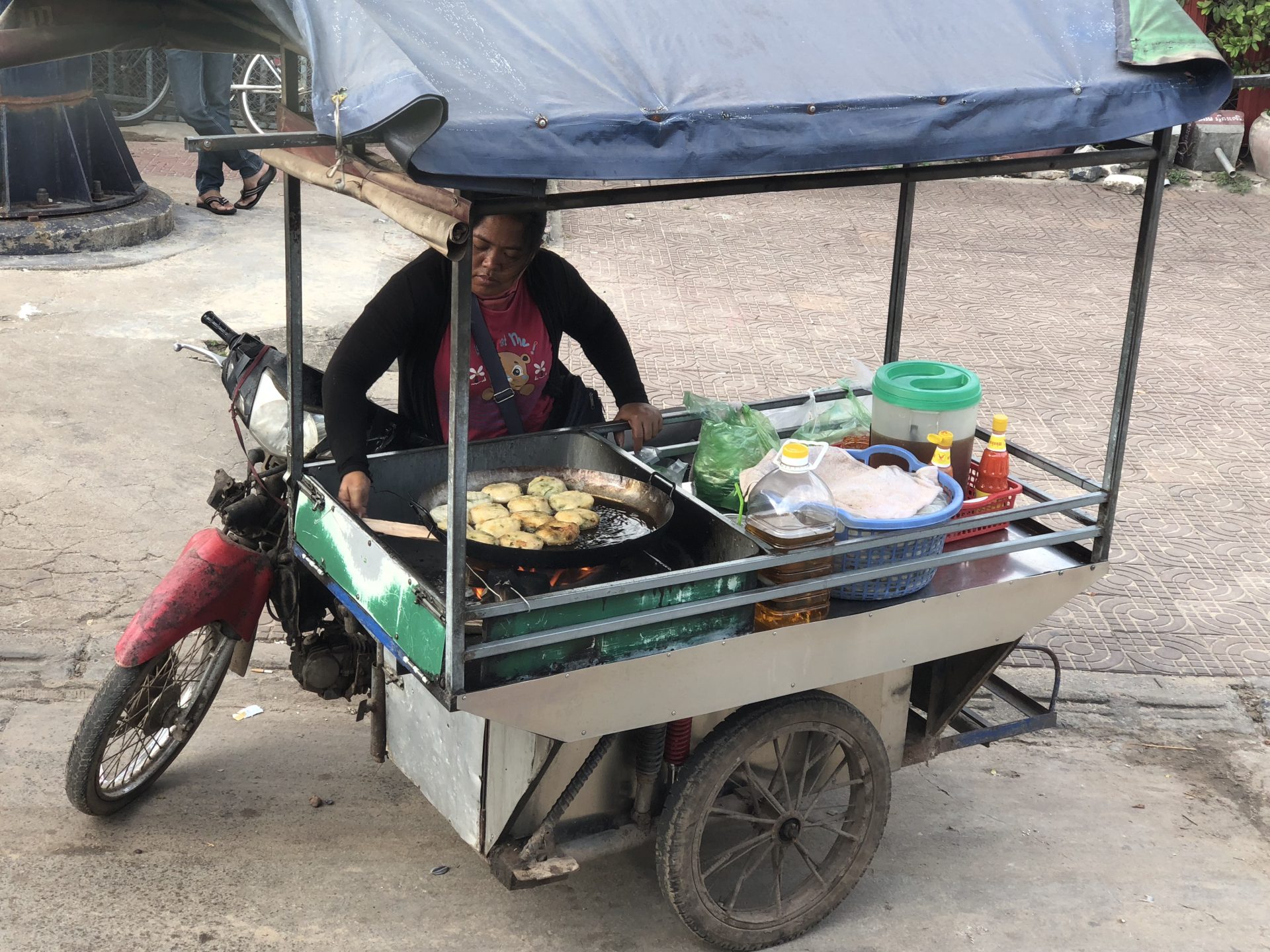 while next to her, this gentleman made sugar syrup drinks in to-go cups directly from sugar cane (he’s feeding the cane into the ‘juicer’): 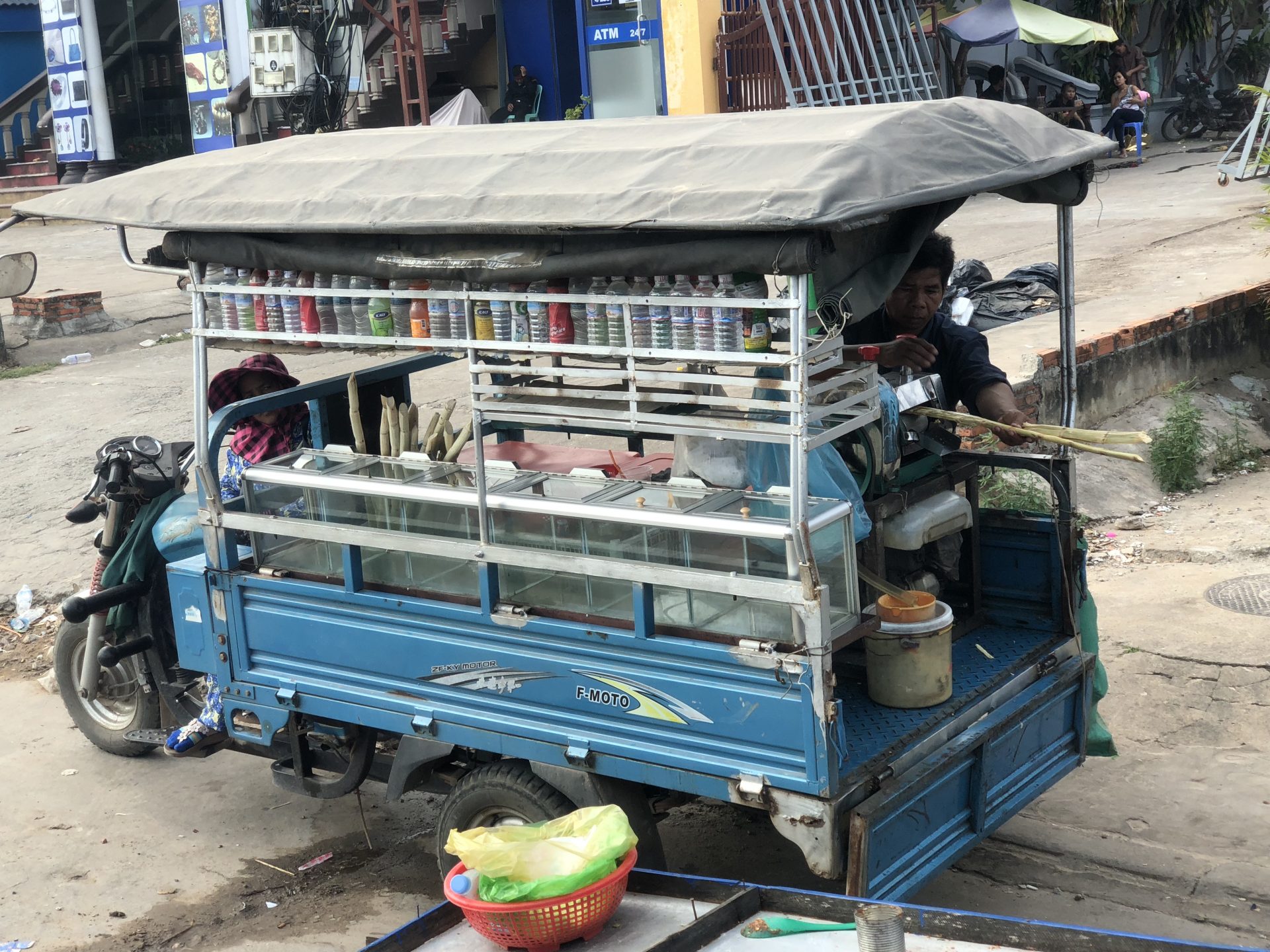 Jarring images could be found at every corner, where the old and the new collided:

It was a fascinating 10 hours.  What the photos don’t show is Sihanoukville’s trash problem.  They have no (nada, zilch) infrastructure for handling their garbage, so every empty lot, every hillside, every yard was a mini toxic waste site.  Chinese investors are pouring money into resorts along the coast; perhaps this influx of revenue and jobs will help Sihanoukville reduce the poverty and detritus that we witnessed.  But, since the country is a “vaguely communist free-market state with a relatively authoritarian coalition ruling over a superficial democracy” (according to Human Rights Watch) and corruption runs rampant, maybe not. 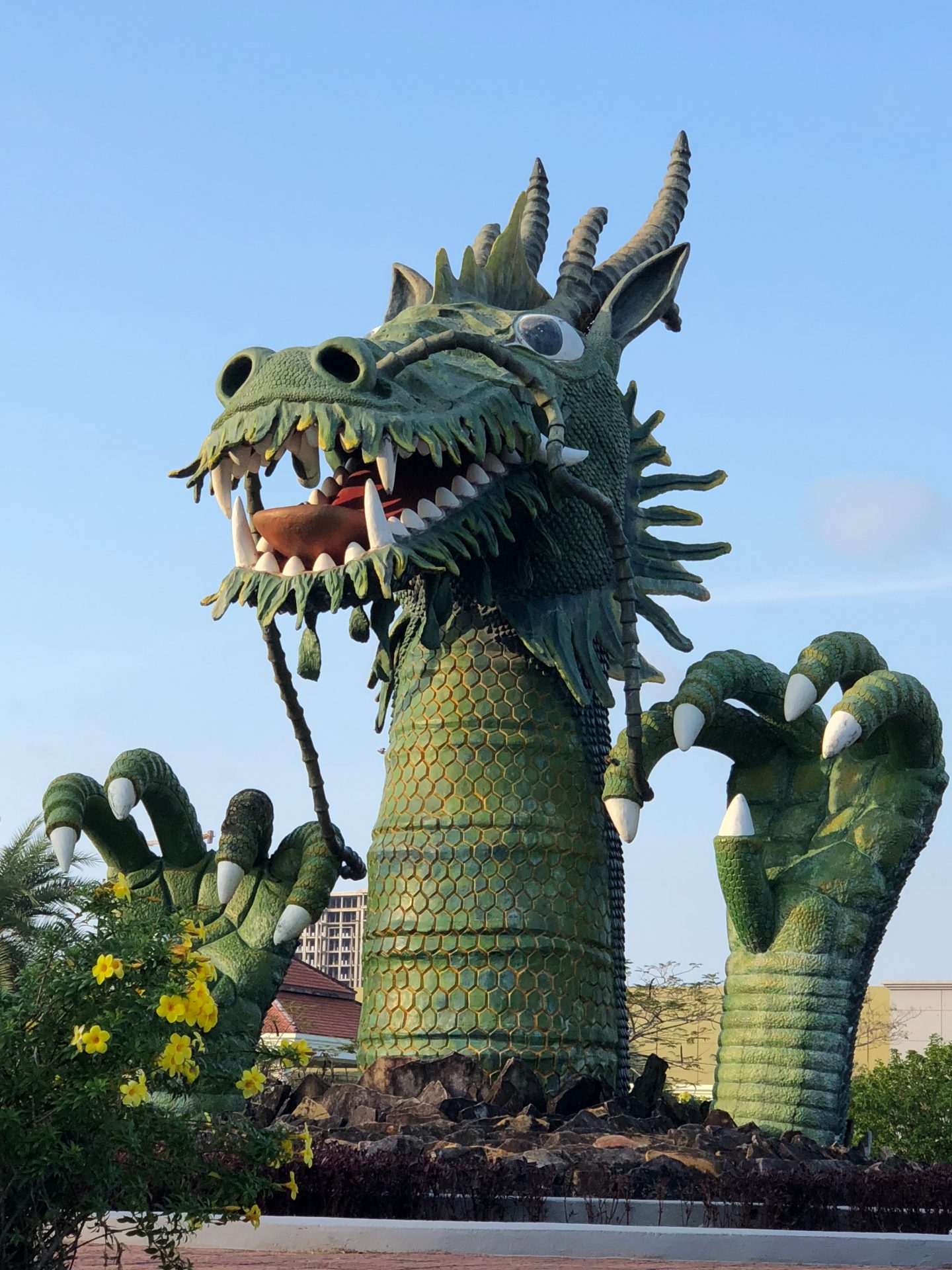