Shanghai.  The word conjures exotic trading, lethargic boats (the ‘slow boat to China’ we always heard about years ago MUST have docked here – or may still be on its way), inscrutable faces …. and a rather glamorous intro into everyday Chinese life.  We were dazzled.

Skies were partly cloudy as we threaded our way through hundreds of ships on the Huangpo River to gain our first view of Shanghai and, again, we were unprepared for the sheer size of EVERYTHING.  To imagine a city of 23 million people – well, the mind boggles.  And yet we never saw crowds, never felt crowded, and we observed a city that seemed to run like a well-oiled clock.  Growing up a baby boomer with all the attendant propaganda about China (most of it well-earned), it almost pains me to say that we were totally impressed. 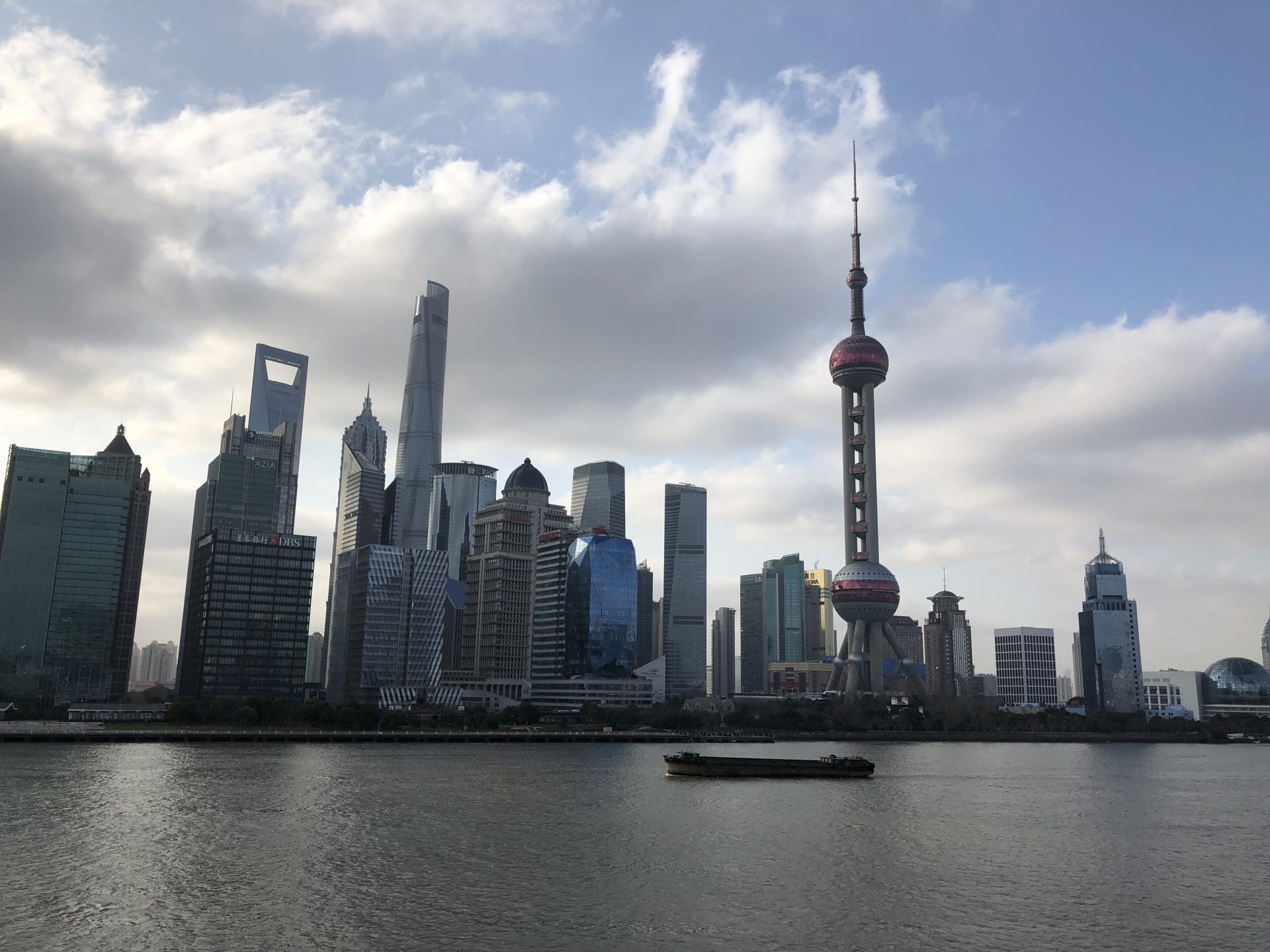 We grabbed the opportunity to walk off the ship and explore the surrounding neighborhood before our excursion into the city center.  The dock area and surrounding riverside park were manicured and beautiful; people were running along a ‘bouncy’ path, doing TaiChi and riding bikes amidst flowers and trees in late winter bloom.  A couple blocks in, we were stopped by an advertisement with a familiar face on it:

We wandered into a nearby grocery outlet (no produce or meat/fish), and while trying to guess the contents of bags and boxes we couldn’t read, we were surprised to find these almost-familiar snacks:

Today, we’re visiting Nanshi, or the Old Shanghai Road area, where traditional shops abound:  silk scarves and clothes, pearls, jade and every iteration of inexpensive (and VERY expensive) Chinese souvenirs can be had here.  The shopping was okay although we had to spend most of our time batting away pesky hawkers who attempted to lure us to ‘underground’ shops that sold knock-off watches, purses and jewelry.  We were warned to resist at all costs, but pausing to look at ANYthing in one of the shops would cause the hawkers to swarm offering ‘more and better’ of whatever it was you were looking at.  It was tempting.  We didn’t succumb. 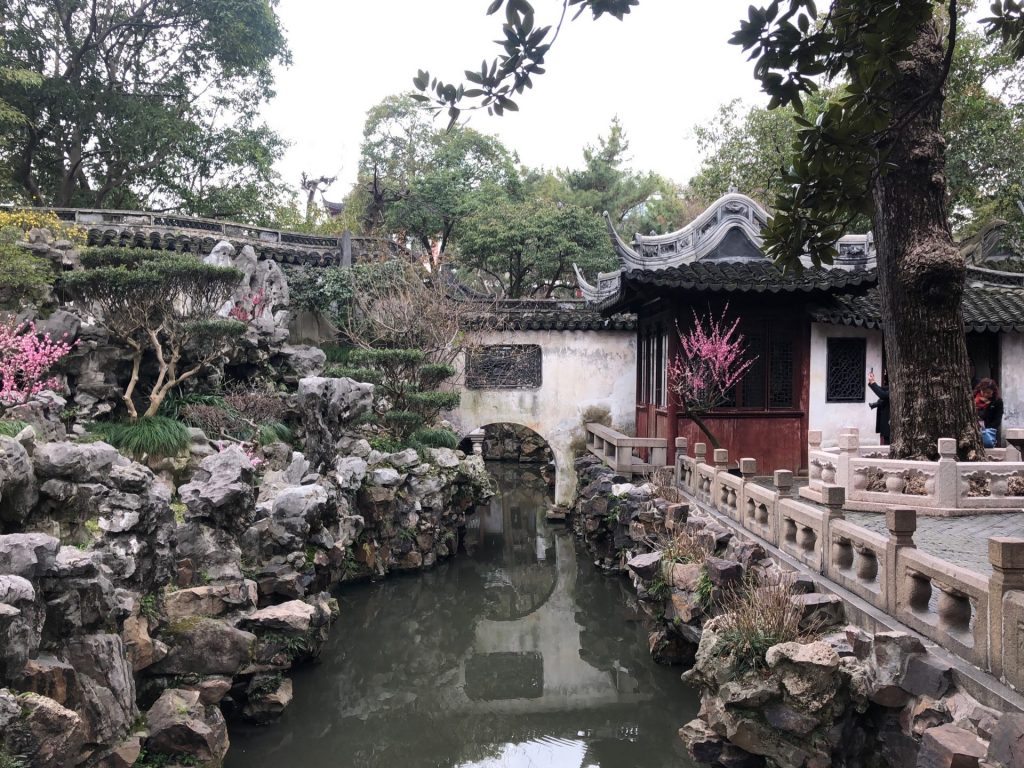 but nearly everything in the Yuyuan was overshadowed by this elaborate New Year’s display, also known as the Lantern Festival,  which was overrun by selfie-taking throngs.  We’re big fans of the Disneys (Land and World), but even there, at the ‘happiest place on earth’ we’ve never seen anything quite like these temporary creations.  At the end of the week, they’ll be gone.

On the ride back to the ship, our guide told us about the old ‘houses’ in China

that are being torn down to modernize the cities.  In these ‘houses’ (more like small, decrepit apartment buildings) five or more families would share a bathroom and a kitchen.  In his words, the condition of those rooms was generally appalling – no one wanted to clean them so they were always filthy.  (I guess no one thought of devising a rotating cleaning schedule, but I digress…) The unkempt residents started going to nearby shopping malls to perform their nightly ablutions and avoid their household bathrooms, an activity that prompted Shanghai to impose a “No Pajamas in Shopping Malls” law.  Today, as these houses are torn down, the residents receive a handsome sum AND a new ‘house’  and they never have to work again (and they all live happily everafter).  (We fact-checked this tale with a couple of different sources and it seems to be accurate!)  Amidst the destruction, a few old houses remain; 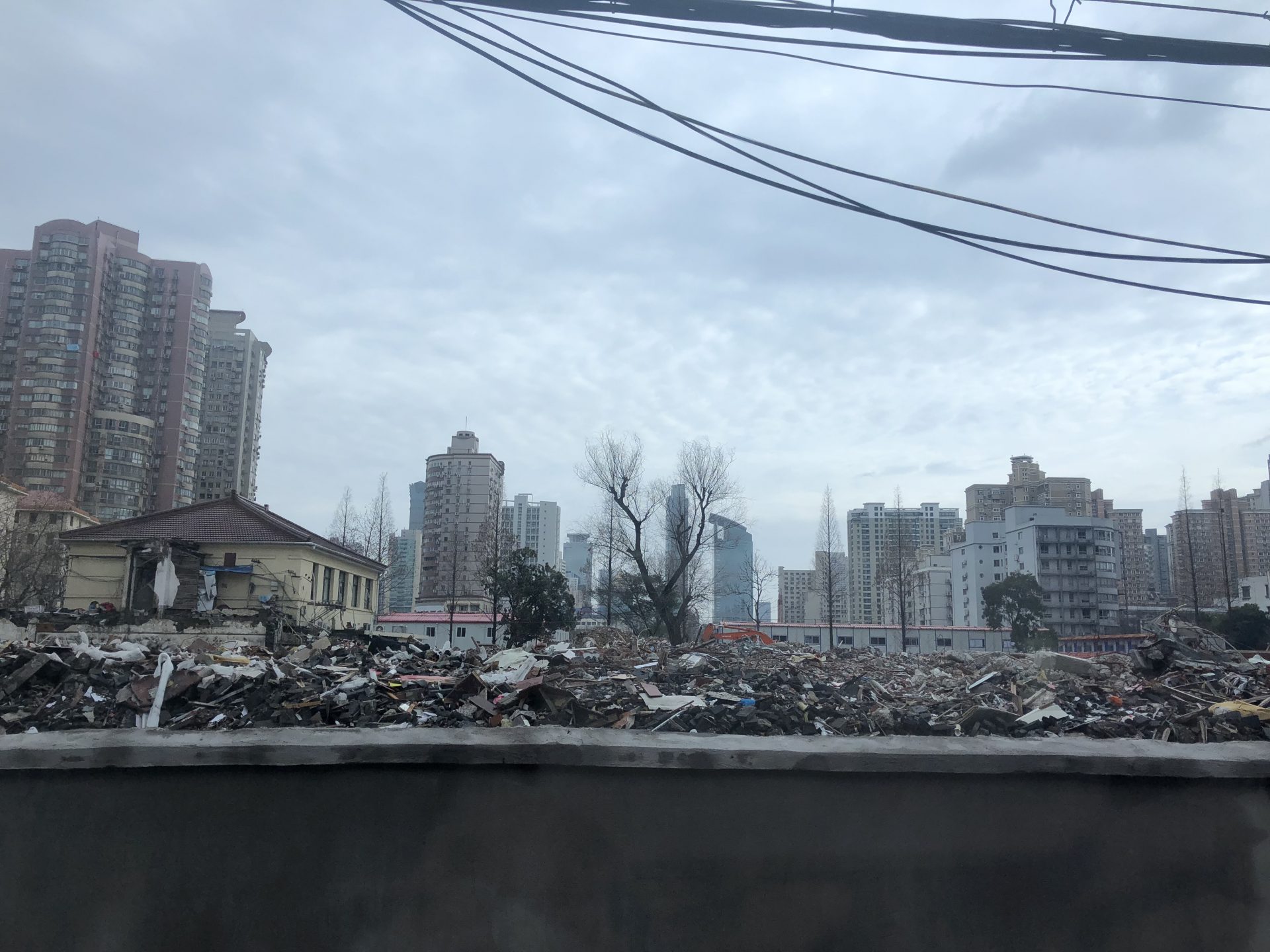 we saw ingenious solutions to the sharing problem, like these outdoor sinks – which gave these families a sliver of kitchen on their tiny balconies… 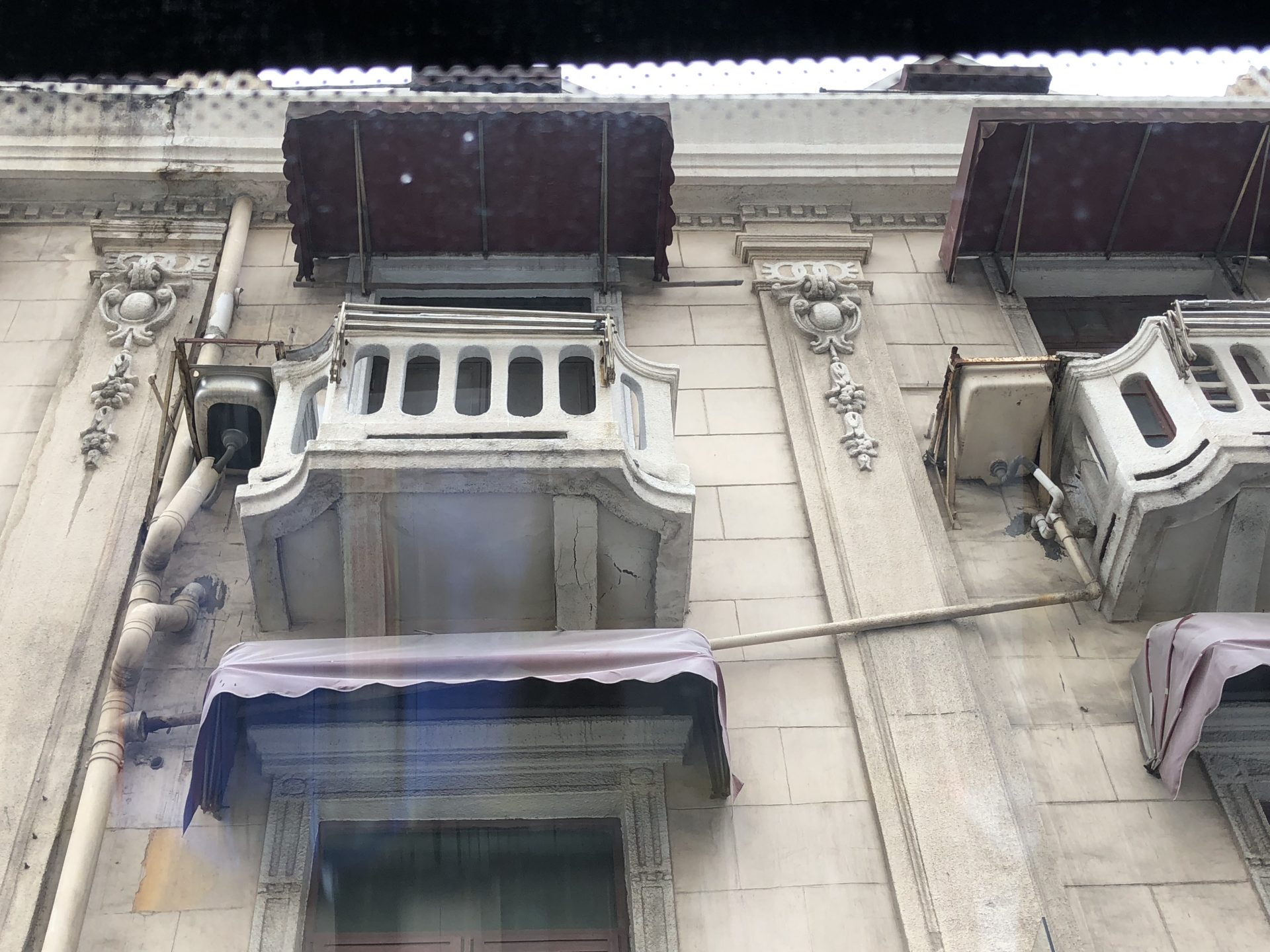 The futuristic architecture of many of Shanghai’s buildings stands in contrast to the more mundane, older structures.  (And, wait a sec!  Doesn’t that bull look familiar?  There’s one on Wall Street in NYC and one in Shanghai’s Bund (their financial district).  For reasons that aren’t clear, no one rubs the balls of the Bund bull like they do the one on Wall St. (It IS a repressive society, after all.))

At night, we immersed ourselves in the light show.  Ascending to the 88th floor of the Jin Mao Tower, we looked down into the lobby of the Hyatt Hotel: 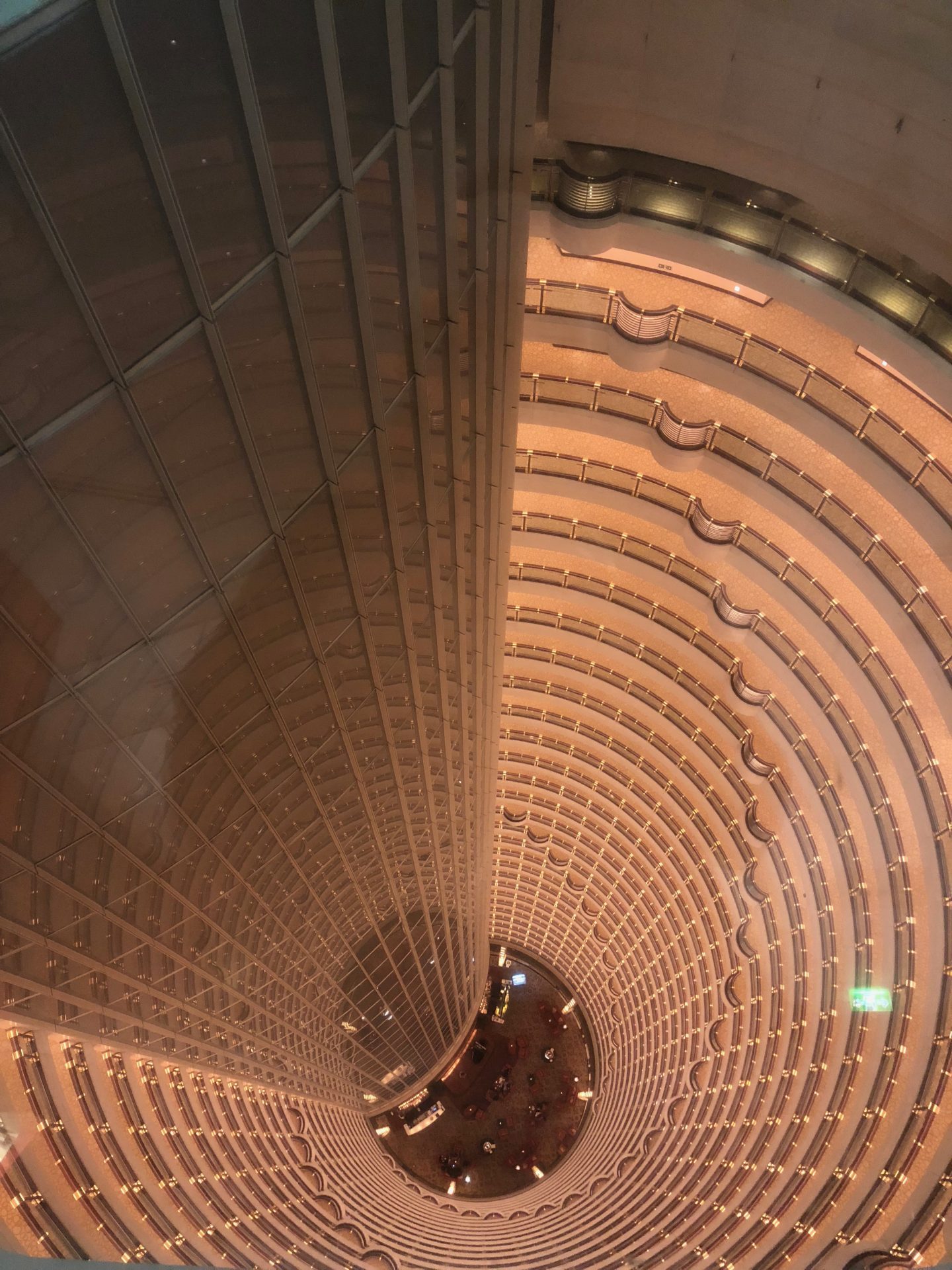 and shared the faux terror of experiencing the Jin Mao Skywalk (thankfully closed for the evening):

Yet another reason to fear China’s power:  there is an annual BIKE race UP the stairs at the Jin Mao (yes, UP!); the last world record for which was won in 2008 by a 37 year old man who climbed the 88 floors in 39 minutes and 38 seconds and whose thighs have STILL not recovered. 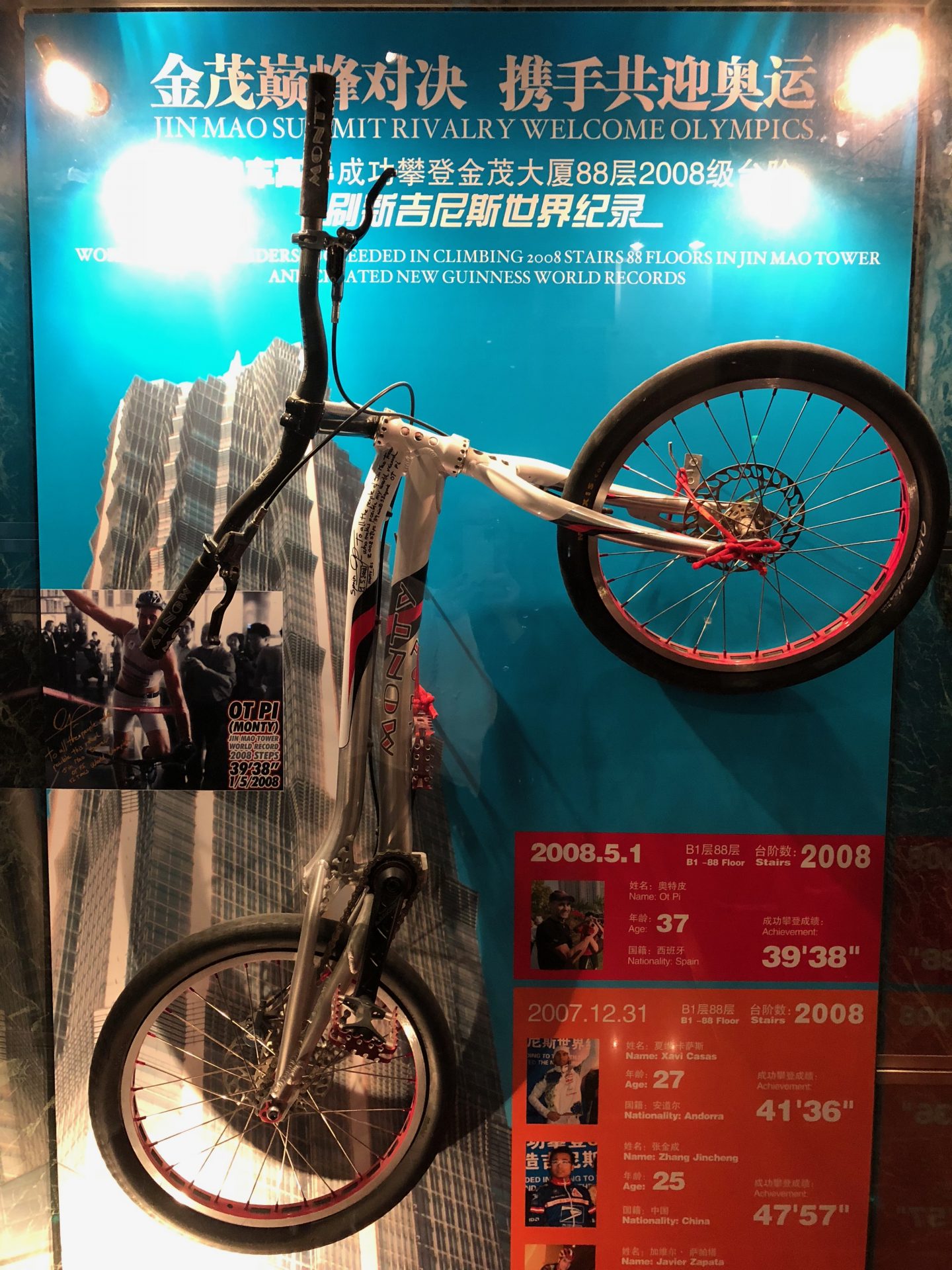 The light show from the top of Jin Mao was bewitching 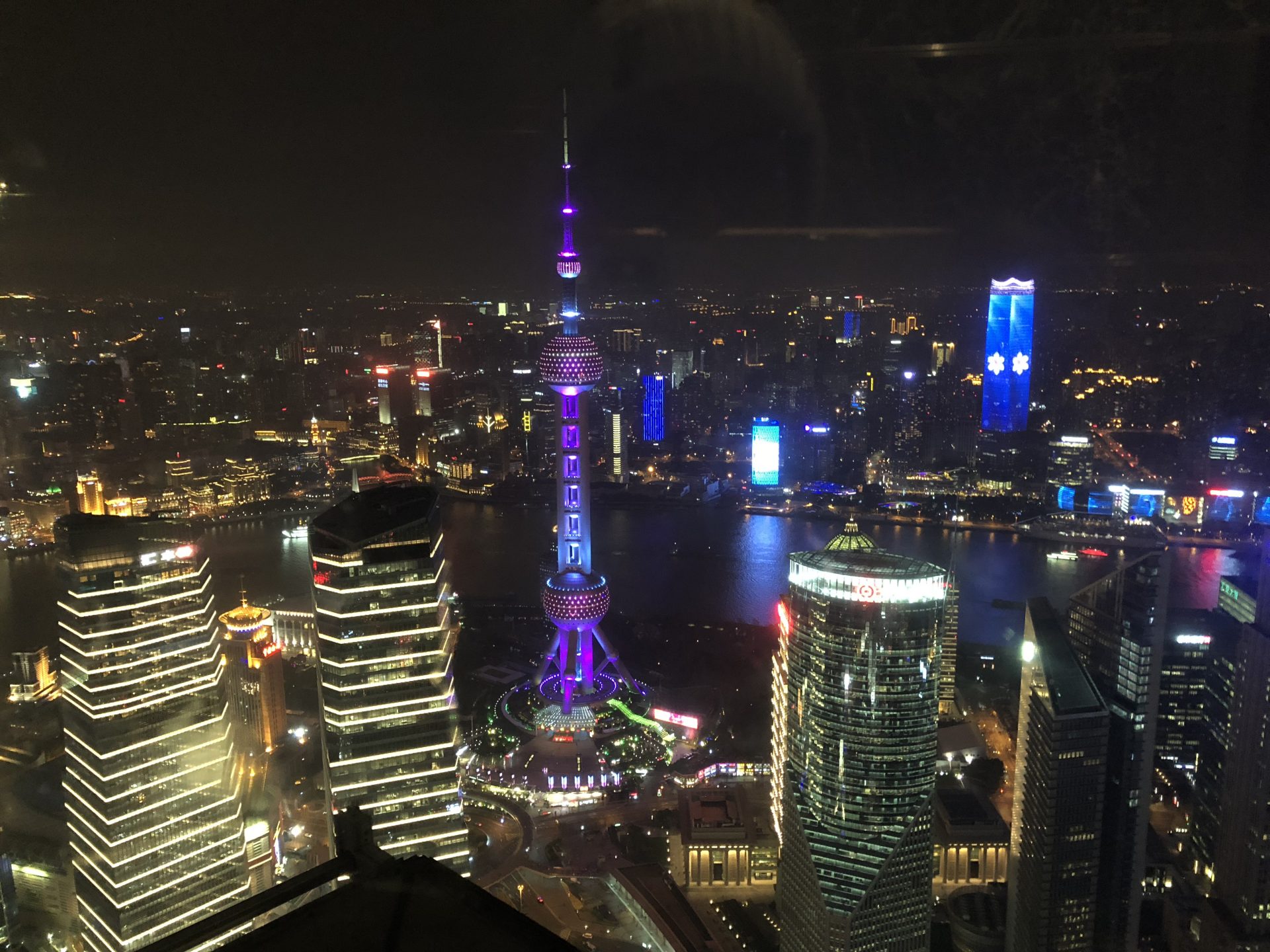 but the real magic was happening back at the ship, where the closest skyscraper was in paroxysms of LED fueled delirium:  (The patterns didn’t repeat for 7 minutes; I have a video but it’s too long for this format AND for my attention span).

Next:  Post-cruise:  One More Day in Shanghai