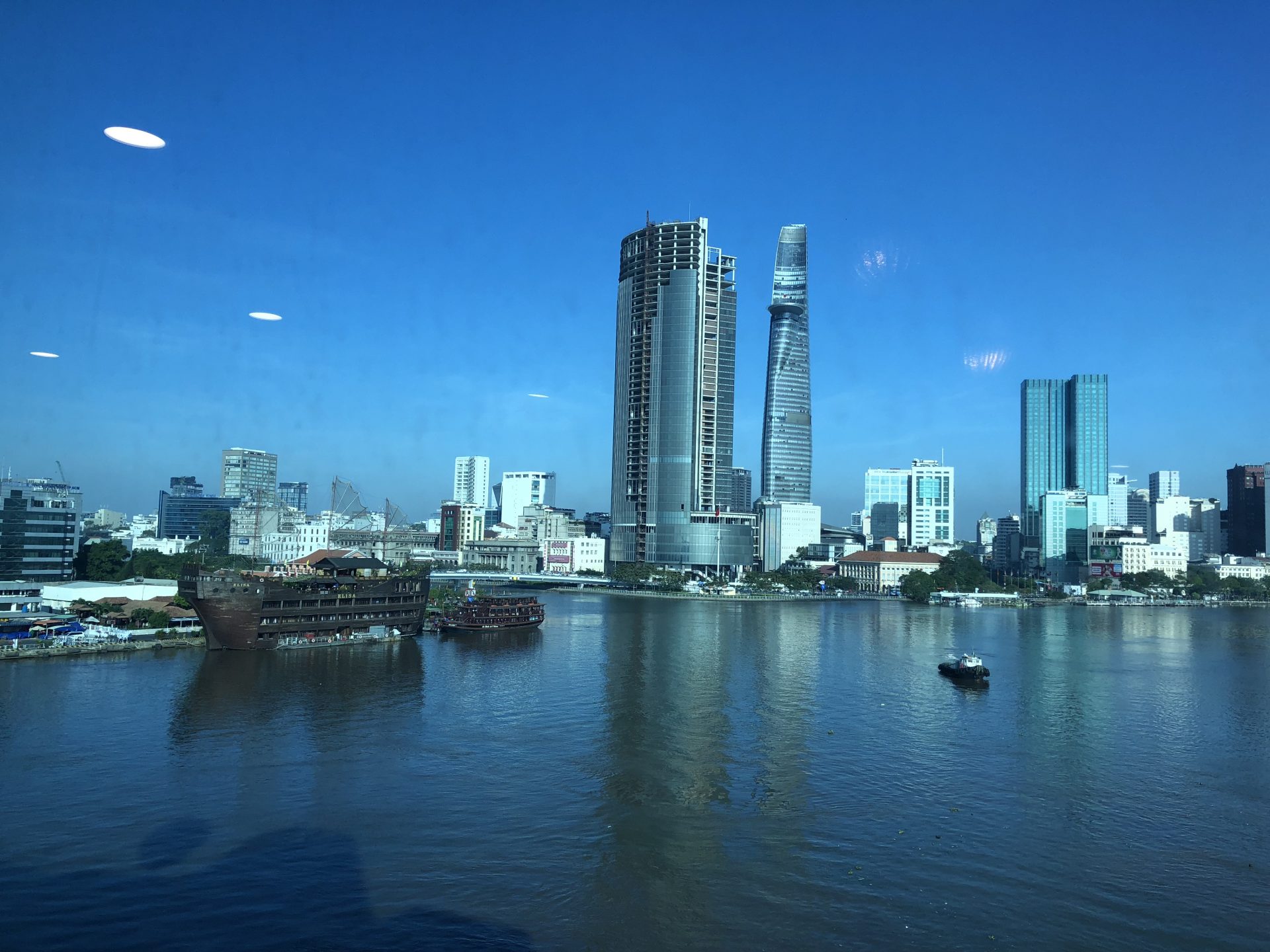 Ho Chi Minh City (still called Saigon except during governmental activities) is home to 9 million people and is HOT (although I was corrected by our tour guide.  The Vietnamese like to say that their country is ‘warm’.  Right.  Like Minnesota is ‘cool’ in winter.)  Please note:  the city is not being attacked by bright, white UFOs in the above photo.  I think my camera was just reacting to all the ‘warm’ in the air.

We set out early to My Tho, a village near Saigon, passing a checkerboard of rice paddies and industrial developments along the way.  The excursion was labeled “Mekong River Delta Cruise”.   I wasn’t sure what to expect (that ‘child of the 60’s’ thing, again).  Were we going to see the ravages of war or lush waterfront?

Thankfully, (I think) what we ultimately boarded was THIS:  (but I’m getting ahead of myself)… 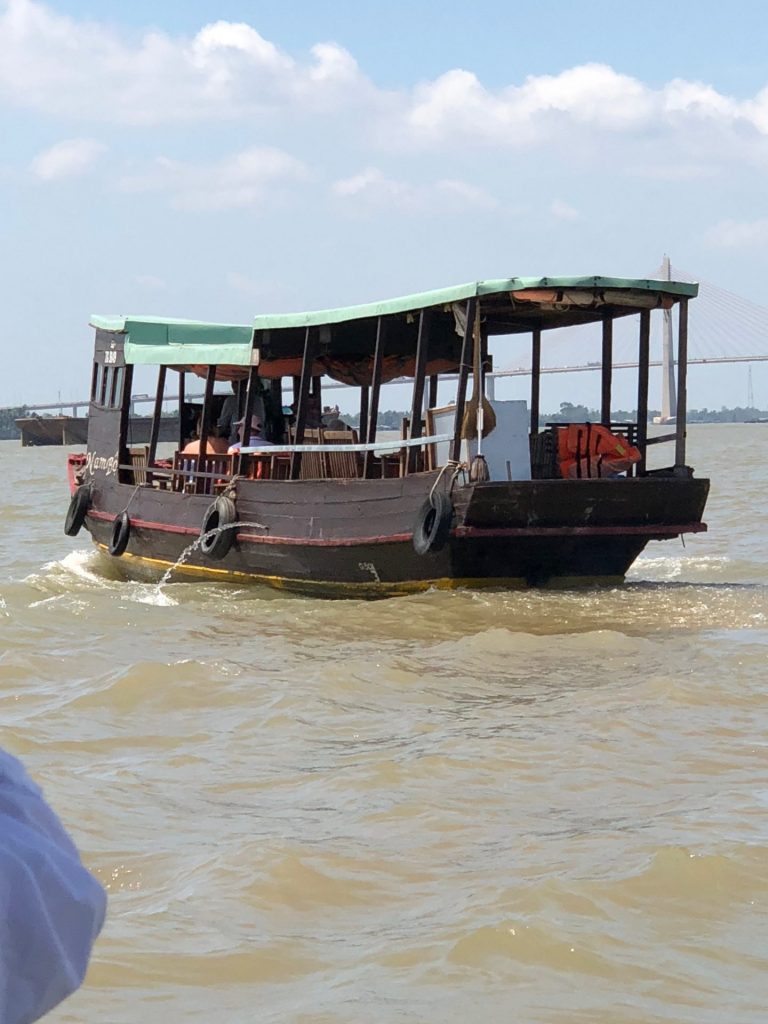 Even though the ‘larger’ cruise was labeled “Imperial Awakening”, it seems that was just code for “Temple Tour 2018”.  Before we got anywhere near the Mekong Delta, we detoured to the Vinh Trang Pagoda, which was, like the other temples we’d visited so far, A: beautiful, B: full of New Year’s devotees and C: all starting to blend together.  And there are still more to come… (You don’t see the throngs because I think people clutter my photos.  So I wait.. and wait… and sometimes I’m rewarded and the people disappear.)

After the relative peace and calm of the temple, we boarded the Mekong River yacht (above) for a boisterous sail across the waters to a bee keeping/candy making/ exotic fruit tasting extravaganza on Thoi Son Island.  I’m pretty sure our on-board guide was telling us all about the Mekong River and its history, but between a terrible PA system, a tinny speaker and a lush accent, all I heard was “Keep arm in boat”, so I did.  Just the one, though.

I was disappointed that we weren’t able to sample durian during the exotic fruit taste fest despite my request to do so.   (Here’s a quote from the Smithsonian:  “Durians have a notorious aroma likened to rotting meat, turpentine and gym socks. If you’ve smelled a durian even once, you probably remember it.”)  Our guide looked horrified and instead, we got milk apple (which was delicious!) and these fairly ‘normal’ fruits:

My fruit disappointment was more than assuaged when we lined up to board our Sampan, or ‘3 boards held together by twine and some blue paint that seats 6’ for a 20 minute ride down Sampan creek.

I was okay with all of this (until I learned that the Sampan drivers – nearly all women with ferocious biceps – average about $1 (USD) per day, augmented with tips) knowing we were headed back to the ‘yacht’.  I’m not a strong swimmer, but the likelihood of drowning among these sampans was surely remote.  However, while watching our travel companions be gently deposited on shore, our Sampan decided it would be ‘fun’ to row out into the Mekong river to join our ship, docked offshore.  ‘Fun’ would have been eating durian.  I prayed for the twine to hold, being VERY mindful of all the cautions we’d received about the Sampans:  DON’T stand up, ever.  DON’T shift your weight.  To exit, CAREFULLY stand on your seat (yes, NOW you can stand), in the exact middle of the Sampan, and JUMP off, being careful not to tilt the Sampan.  Yikes!  The ‘yacht’ suddenly looked very substantial and a goal to be reached.

On the ride home, we passed numerous ‘businesses’ (some buildings, mostly tents) that were filled with hammocks.  After lunchtime, most of the hammocks were gently rocking.  We learned that renting a hammock for a post-meal snooze is a booming business in Saigon; armed with this knowledge, we began to see hammocks everywhere..

I am endlessly curious about the way people live all around the world and try to capture photos of homes, neighborhoods and events when we travel.  This is not a great slideshow – all of it was shot from a moving bus – but here are some houses in the outer reaches of Saigon, just in case you’re curious, too.

Next:  a bit more Saigon