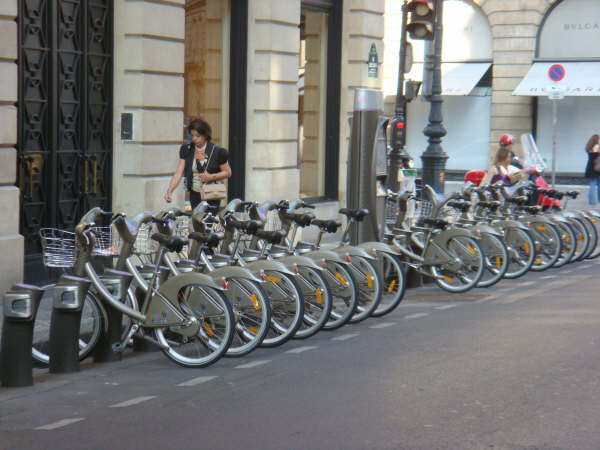 Getting Around Paris:  Bikes, Boats and Baguettes.

You can never get around Paris.  Or over it.  Paris frustrates me.  Just when you think you have seen Paris, or understand Paris, or are tired of Paris, it will unfold itself just a tiny bit more.  It is the grand seductress of cities.  It will lure you in, promising an enchanting time at the Eiffel Tower, Notre Dame, the Louvre and you will go away thinking you’ve ‘done’ Paris.  It will smile indulgently at you from a distance.  Because every time you return to Paris (and you will), you’ll experience an entirely different Eiffel Tower, Notre Dame, etc.; and then you’ll want to know her even more.

You’ll read, you’ll take guided tours, you’ll attempt to learn French, you’ll wander the streets at all hours trying to put your finger on exactly what it is about Paris that fascinates.  And you’ll get whiffs every now and then; enough to keep you on the scent.  But Paris is elusive and moody.  She prefers her privacy.

Getting around Paris, literally, is another story.  The city is large and there’s lots to see; fortunately, Paris is ready for you.  The best new transport scheme is the ‘rental bike’, which you’ll find densely scattered throughout the central city.  You put payment in a slot, it unlocks a bike, and off you go.  Of course, the program is not without drawbacks.  There are few dedicated bike paths and traffic is a nightmare; Parisians believe their cars to be very slim and able to fit in the smallest spaces. Like next to you IN the bike lane.  I recommend getting up really early on a Sunday morning and biking everywhere; you’ll have the streets to yourself. And at the end of your journey, you just deposit the bike back into any of the  bike racks around the city; no need to return to your point of origin.  It’s genius!

The Seine flows serpent-like through central Paris; the Bateaux Mouches are another alternative to getting around.  Long, comfortable, barge-like boats will take you sightseeing and a smaller version, the Batobus, will let you hop on and off at many important sites along the water.  Pure romance, especially in the evening.

The Paris Metro is a comprehensive subway system that will also get you anywhere you want to go.  There are usually helpful attendants at the bigger stations who will sell you tickets and give travel directions if you are put off by the ticket dispensing machines.  And don’t forget the taxis – Paris has fleets of Mercedes and other upscale autos that will haul you around town in style – but that brings me to another subject.  Trying to be understood in Paris.

I can speak a few words and phrases in French with a reasonable accent.  But, in Paris, if you try to give a destination to a taxi driver in your best French, he will sit with a stunned expression on his face as if you’ve just asked to be driven to Mars.  You can repeat your destination over and over (of course, you can point to it on a map, but that takes all the fun out of it), and each time, he will look more and more puzzled until he finally begins to look fearful.  For example:  we said “Hyatt Hotel” in numerous cabs, to looks of extreme bafflement.  We’d repeat it three or four times until a light bulb moment later when the driver would say:  “Ah!  ‘Eye-yatt O-tel’.  Oui, oui!”  I’m certain it’s just a fun way for them to pass the time and annoy tourists.

You’ve probably heard rumors that the French can be rude.  In the past, those rumors were certainly true.  In recent years, however, it appears that the French attended charm school and are capable of being quite helpful and talkative.  Note that I said ‘capable’.  Arm yourself with at least a few words of French: it will make all the difference in how you are welcomed and treated in many establishments.  Just do try to know what you’re saying.

Some things not to miss:  (in addition to the list of the usual attractions!)  Have dinner at an outdoor café after 10PM; American meal times are a curiosity here; you’ll find yourself eating alone (or with other Americans) at 6 or 7PM.

Stroll to the Eiffel tower at 11PM and revel in the romance of one of Paris’ iconic images lit as if exploding with joy.  Linger in the Luxembourg Gardens when a band is playing in the gazebo.  Stroll the banks of the Seine after dark when the buildings and monuments are lit to extraordinary effect.  Eat a dessert crepe in the Latin Quarter.  Search out the locks and canals in the northeast part of the city for a respite from the crowds.  Mostly, just go to Paris and try not to miss anything.

My final impression to share with you:  Sitting on a 19th century park bench in the leafy Luxembourg Gardens enjoying a baguette lunch with the love of my life while listening to the “Ohio Ambassadors of Music” (high school grads with extraordinary musical talent from the state of Ohio!) entertain the lunch crowd with blues, tango, Sousa and a bit of pop.  After a short pause, the first strains of “America the Beautiful” came wafting towards us.  As emotion overcame me and a tear rolled down my cheek, I realized:  it was time to go home.

Thank you for sharing this European odyssey with me these past two months.  I hope that I’ve sparked (or re-sparked) your desire to travel; that I’ve told you about a few new things and accurately given you my slightly skewed impressions of the world.  But, mostly, I hope I’ve kept you entertained.  Farewell for now!