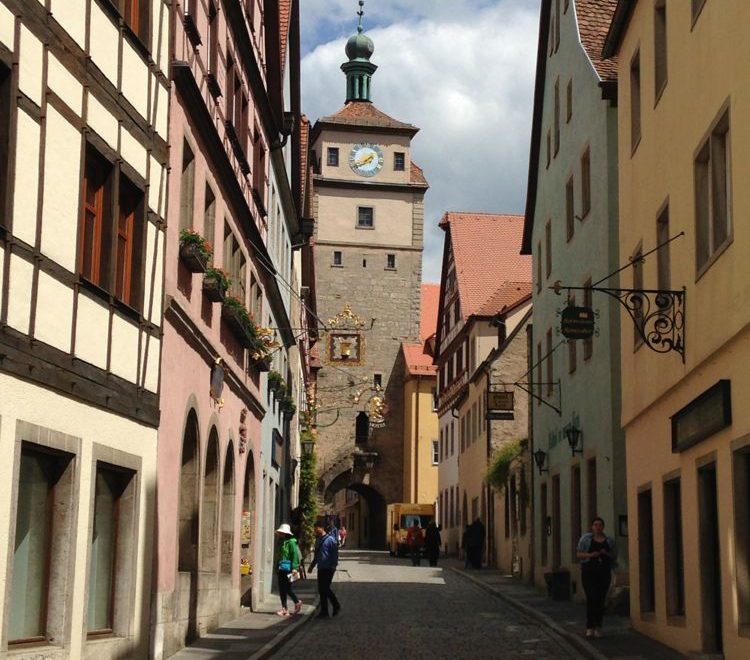 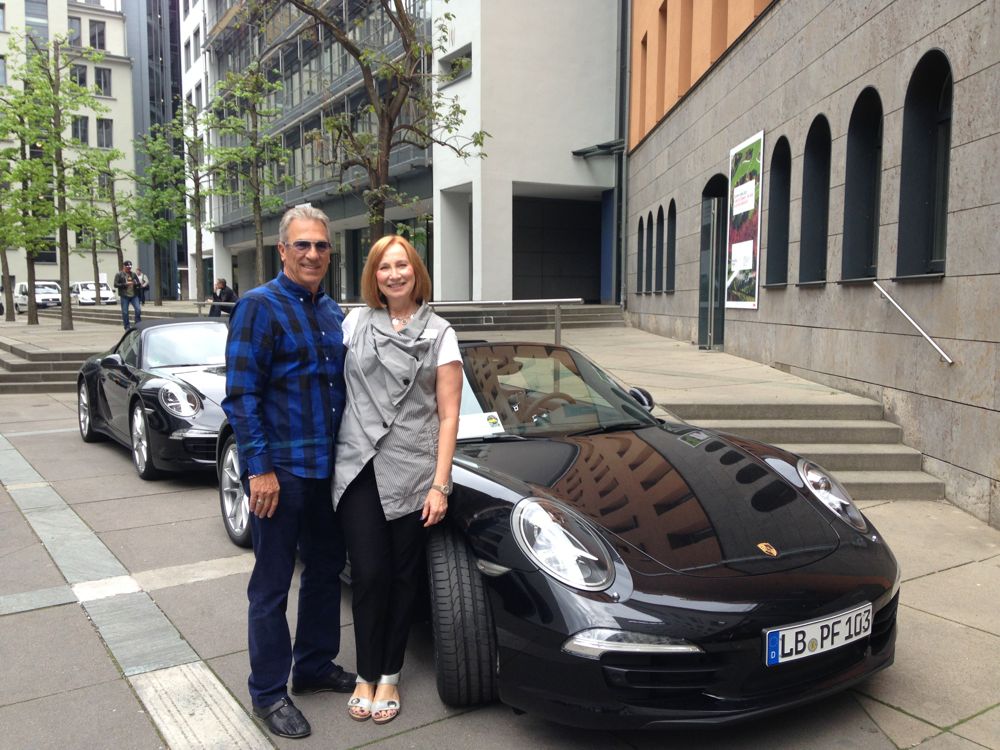 “Let’s fly, Eagles!”  These 3 words will be forever burned in my memory as the Official Start of the Birthday Which Shall Not Be Named.  My hubby chose to celebrate his birthday this year by driving in a Porsche Treffen – an opportunity for the confident, competent driver (aka ANY guy with a driver’s license) to take a new Porsche 911 on the Autobahn and experience the freedom of PURPOSELY driving like you and your car are on fire.  I was along for the ride (of my life).

I’d been slightly nervous about this whole enterprise but calmed my fears by imagining the open, uncrowded roads in Germany and mentally reviewing the many films I’d seen in which dashing men and glamorous women sped, unimpeded, (with great theme music), from Point A to Point B to catch spies and blow things up.  Or go to lunch.  Besides, I’d driven on the Autobahn before.  No biggie.

Day 1 in Stuttgart dawned grey and rainy and I breathed a tiny sigh of relief; who, I asked myself, would be foolish enough to drive 100 mph+ in these conditions?  My answer came as soon as our convoy of 5 cars (‘the Eagles’) entered the Autobahn.  “Number 5, block the left lane!”  our leader commanded on our walkie-talkies – and as we dropped into our slots (we were Eagle #2), our leader (Eagle #1) stomped on the gas.  And then I forgot how to breathe.  Or how to do just about anything except grip the dashboard and try really, really hard to ignore the movie of my life that was quickly unspooling at the cinema inside my head.

I couldn’t hold the camera steady enough to shoot a video, but here’s what driving 150mph in the rain looks like: (Yeah, I know.  It looks slow.  And the road looks empty.  Well, it wasn’t and it’s not.)  That’s our leader that you can barely see.

I learned that there are two speeds in Germany:  1.  You vill obey zee speed limit ass posted becauze zere are camerahs, and 2.  GO like a bat out of hell.

As you can probably guess, Germans take their driving very seriously.  A driver’s license requires an initial payment of  $2500 and two months of classroom work.  It is drilled into them that the left lane is ONLY for passing (unlike America, where that lane is for texting, eating and flashing ‘fun’ hand gestures to the cars passing on the right);  they are extremely careful about using the left lane just in case there are crazy Americans driving 150 mph in the rain FOR THE FIRST TIME IN THEIR LIVES mere inches from their cars.

I gained a whole new level of respect for Porsche’s engines and, more importantly, their brakes!  There was TRAFFIC, for heaven’s sake!  We were driving as if we were in the Indy 500 IN TRAFFIC!  Stop-and-go doesn’t adequately describe it.  It was more like ‘screech and launch’.  Wheee!  One minute we’d be going 240 kph, and then with a throaty growl, the car would slow to 70 kph.  You’d peel your face off the windshield and do it all again 60 seconds later.

And the fun wasn’t limited to the Autobahn.  The Eagles took to the curvy, view-obstructed back roads of Bavaria, where the sight of 5 black Porsches screaming through their little villages seemed to inspire awe (or some other emotion that elicits loud German words that I couldn’t understand) on the part of the locals.  We even drove past the castle of Mad King Ludwig – Schloss Neuschwanstein.  This is the view from 120 mph:

After six incredibly tense, ‘fun’-filled hours, we arrived at the lovely lakeside town of Lindau on the Bodensee (or Lake Constance if you prefer the Austrian/Swiss designation).  We rendezvous’d with the other ‘teams’ (18 cars in all) and slowly uncoiled our bodies and psyches (and rinsed out our undies) before a gala dinner.  And then we did it again the next day.  Only faster.