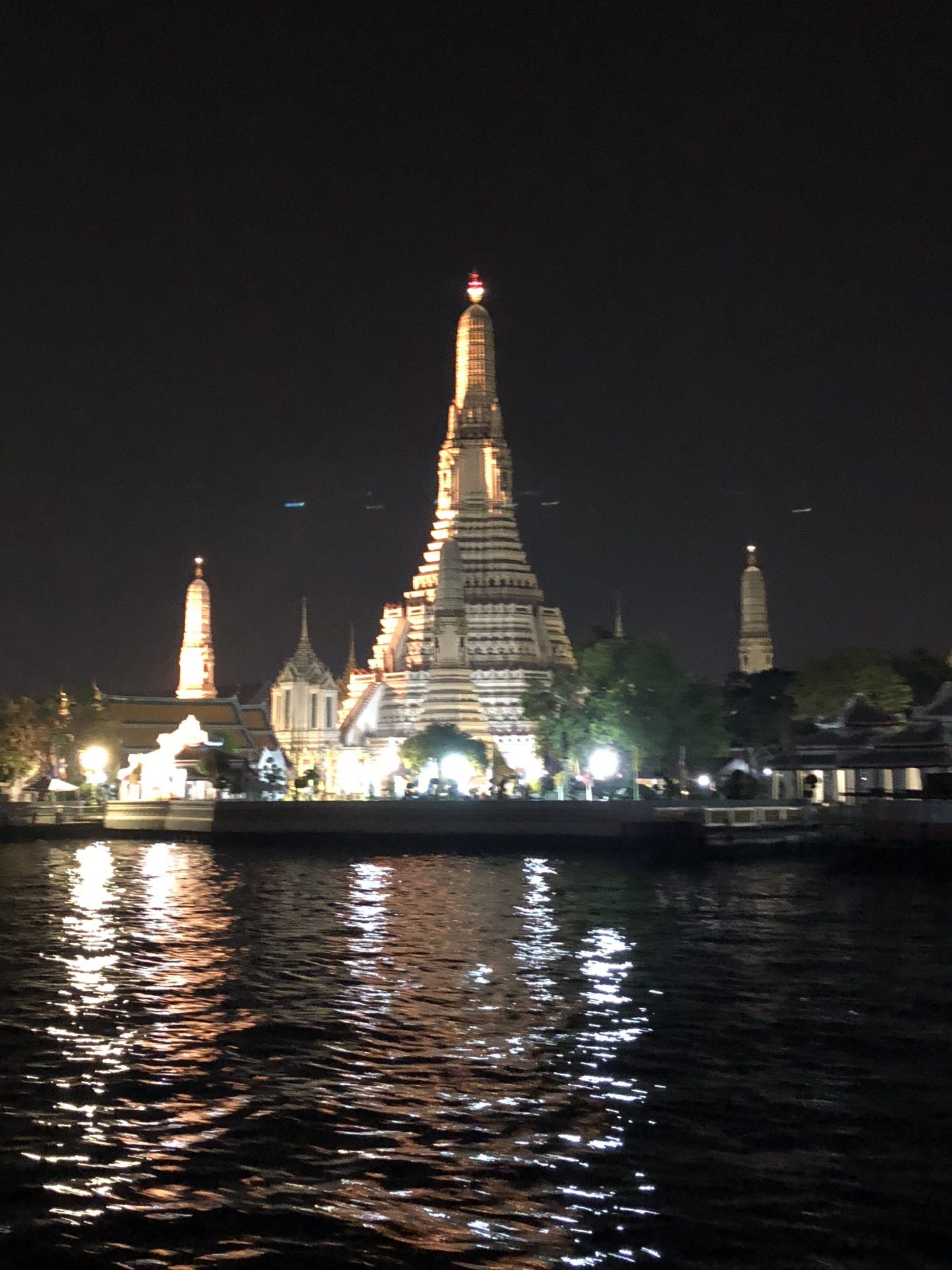 …and the world’s your oyster

The bars are temples but the pearls ain’t free.

You’ll find a god in every golden cloister

A little flesh, a little history

I can feel an angel sliding up to me.

I could not get that song out of my head as we traveled around Bangkok.  Our first glimpse of the city from our 22nd floor hotel room revealed not temples, but construction, cranes and nonstop traffic on the river Chao Phraya with pollution obscuring most of the skyline and a very non-Asian Cathedral plopped in the middle of it all (can you find it?). 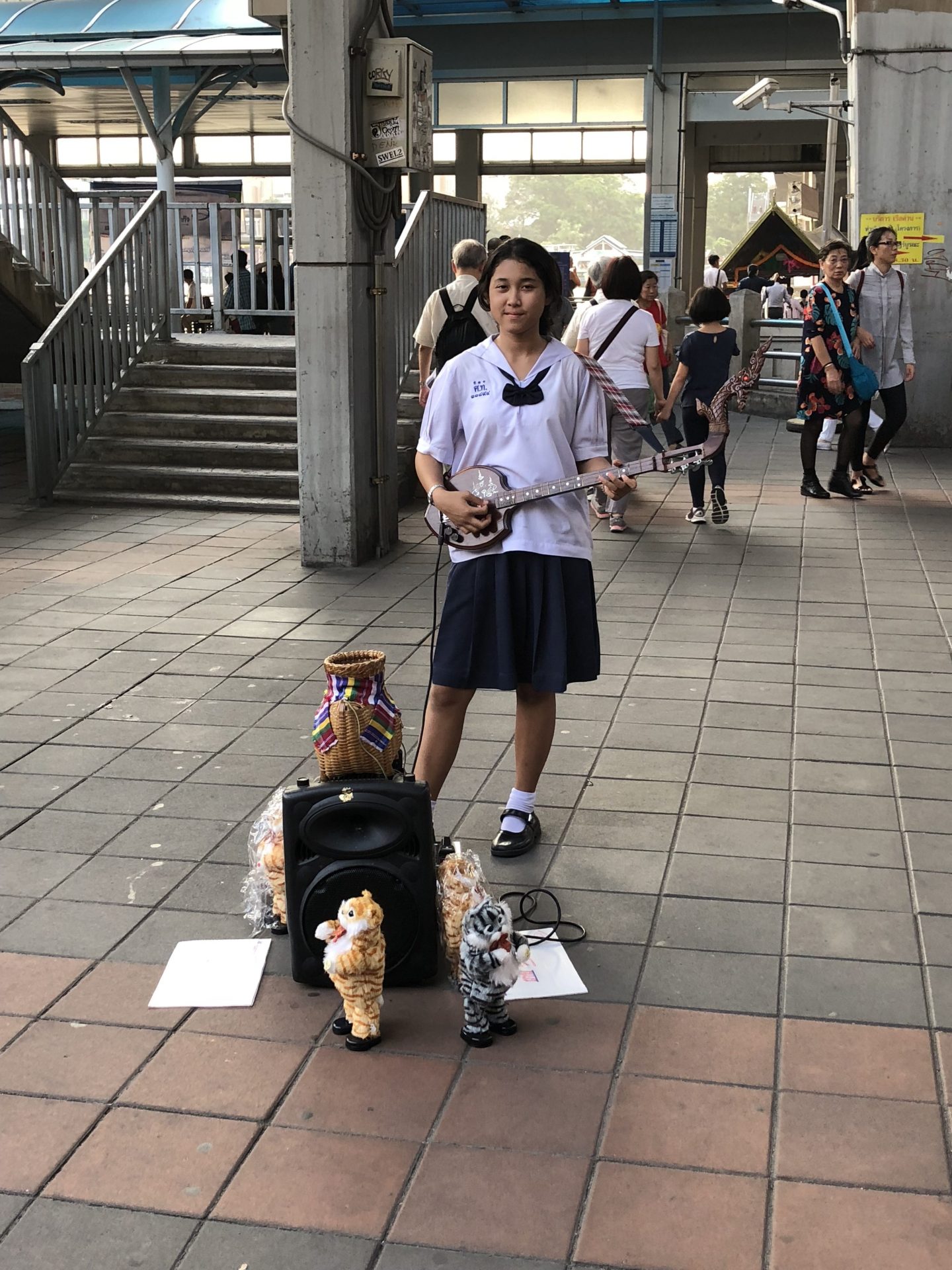 We jumped right into the Bangkok chaos and loved it. While hunting for the closest (and most navigable) means of transportation, we came upon this adorable student at a boat dock trying to raise college money by playing her electric ‘guitar’ while mechanical cats danced at her feet. We watched her for 5 minutes and in that time she earned at least a semester’s tuition. (Hint to the grandkids: When the 529 funds run out, there’s always this option!)

We had time to do 2 two things in three days (besides sweat. Sweating was a full-time, involuntary occupation). We chose Temples and shopping.  On our first full day, we set out to find the much touted Bangkok shopping malls.  We tried walking but were accosted by aggressive tuk-tuk drivers every few feet – apparently, a walking foreigner is an affront to their industry. Ultimately, one very persuasive driver wore us down and managed to sandwich four of us into a ‘tuk-tuk built for 2’.

We shared our destination with the driver and then realized he was pretty much going to take us wherever he wanted. The off-the-beaten-path souvenir/silk/gem shop wasn’t too bad (the guys ended up with silk shirts), but when we tried to make our escape, there was our driver waiting outside and aching to take us to HIS next destination.   We ran down an alley.  In Bangkok. To escape a Tuk Tuk driver. This trip began to look like an adventure.

After ditching Mr. Tuk-Tuk, the next thing we encountered was this icon of Americana 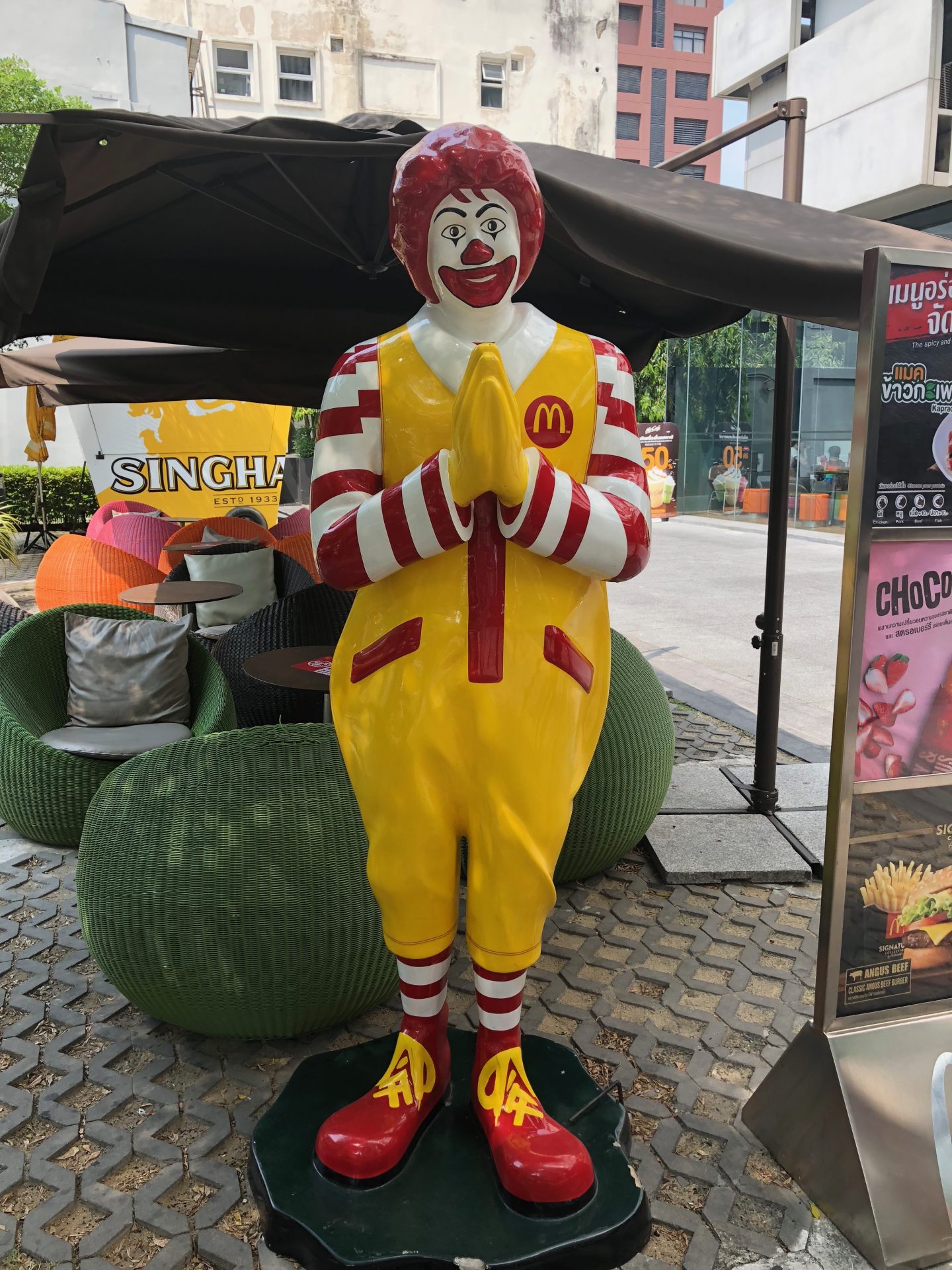 doing the ‘wai’, the traditional Thai greeting of folded hands and a slight bow. (Thai people do not shake hands and pretty much eschew touching others, so this is a lovely, formal way to say hello).  My brother suggested that this ‘prayerful’ version of Ronald be placed in front of every McDonald’s in America to protect us from food poisoning and excess fat/carb intake.

OF COURSE we had to go inside (we’d burned TONS of calories running away)to check out the offerings, which included the usual Big Macs and fries, but also an incredibly spicy Thai pork burger (delicious!) which burned my mouth for 10 minutes after I ate it. 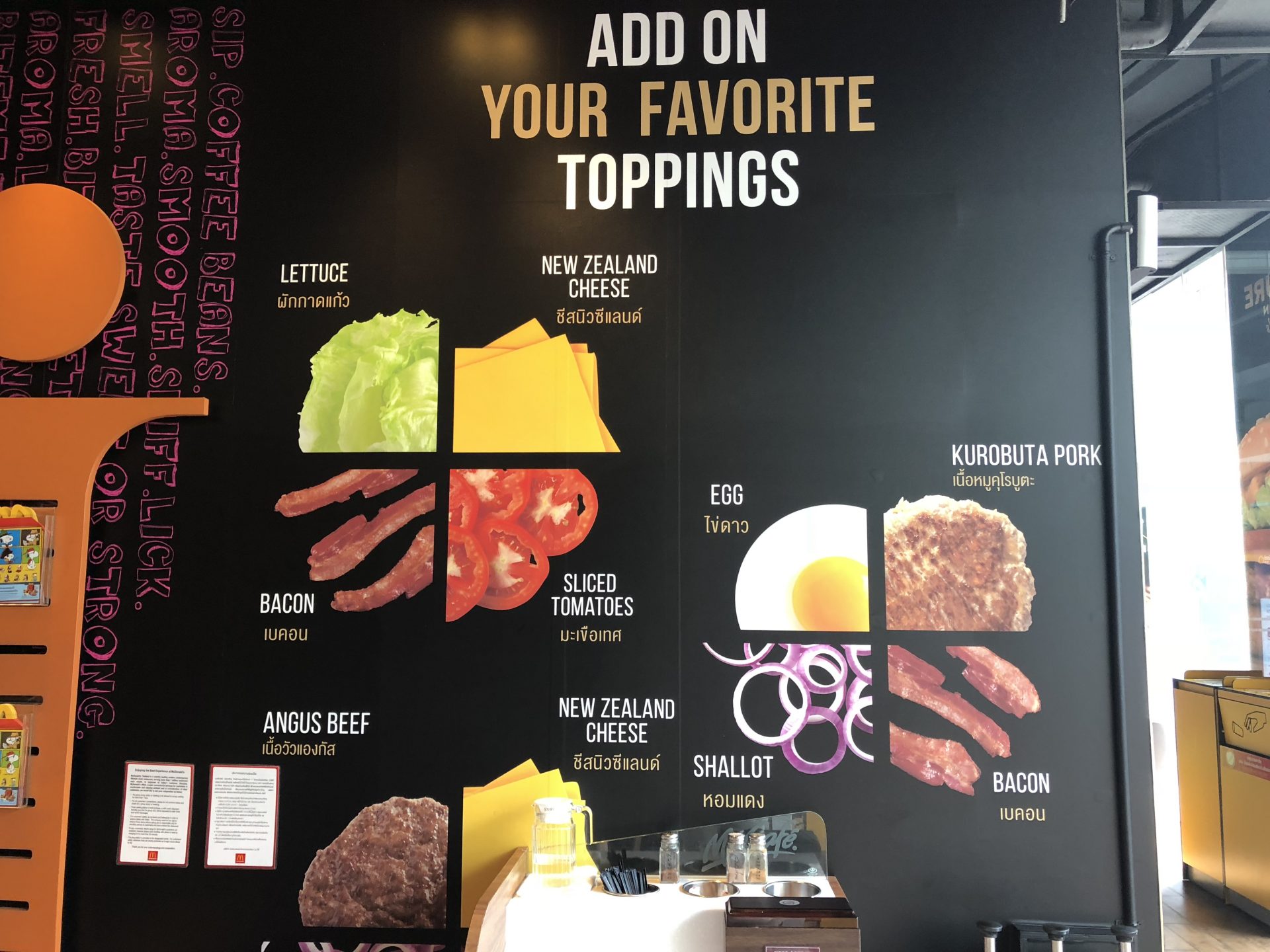 Around the corner was this interesting governmental building: The Anti-Money Laundering Office. We liked this ‘truth in advertising’ approach and suggest it be used in the US:   the IRS, for instance, would become the “Take All Your Money Office” or the NSA could be “We Can Hear You Now” (borrowing from Sprint)… 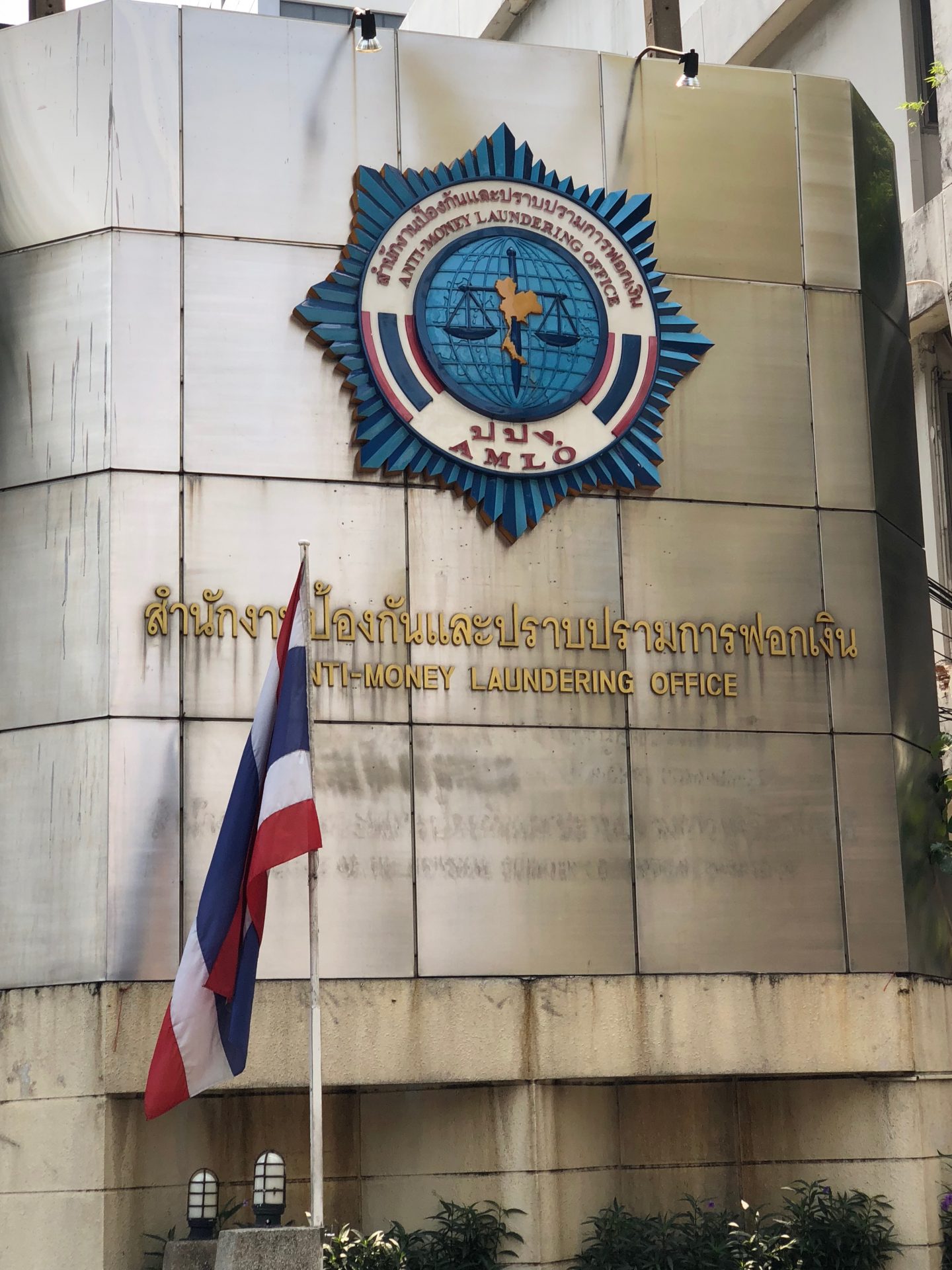 Finally, hours after we first set out, we found the intersection in downtown Bangkok that comprises the mall area. Let me explain: at the confluence of two major roads, there are four enormous malls – one on each corner (really, ON the corner. There are no parking lots between fast moving traffic and mall. Fortunately there are escalators shuttling people to a second story plaza with walkways leading to each mall. Like this: (or we’d all be killed trying to cross the street).

Inside, the malls were dazzling. As were the crowds. We were  traveling during the Chinese New Year and revelers were everywhere. 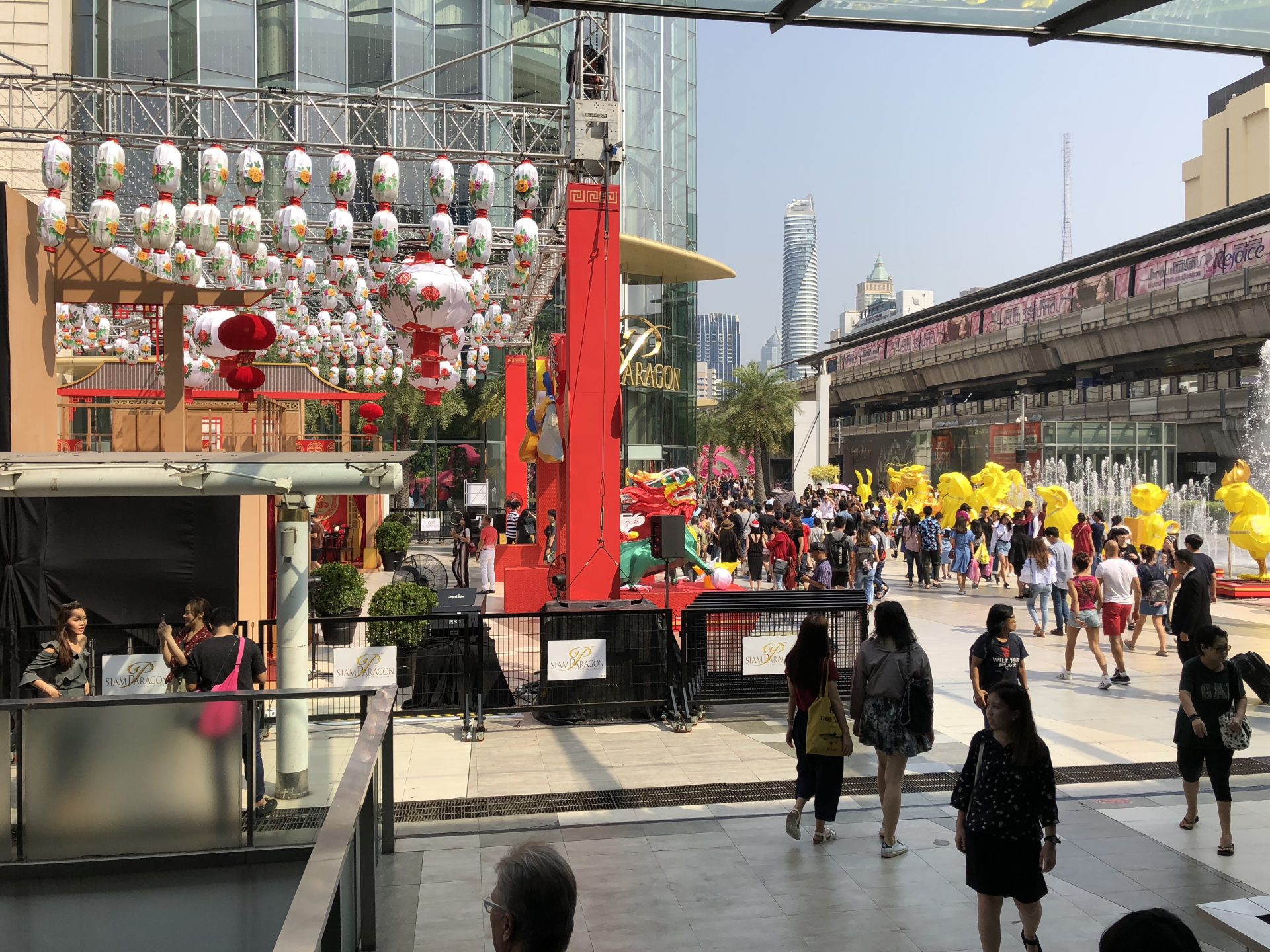 Judging by the shopping malls, Bangkok is most definitely a 21st century city. Aside from the usual clothing, cosmetics and housewares departments, there were hundreds of food kiosks with mouth watering samples of mystery foods to try, acres of tiny Asian tchotchkes (mostly decorative toys) and the biggest selection of clothes for your dog AND cat ever!

The whole experience was so overwhelming, we bought only a mango smoothie and returned to our hotel.

We ultimately found the best way to see the sights in Bangkok was the “Hop On, Hop Off Boat”, questionably sea-worthy vessels that packed people in like sardines and bobbed you up and down the river to temples and palaces and endless bazaars. 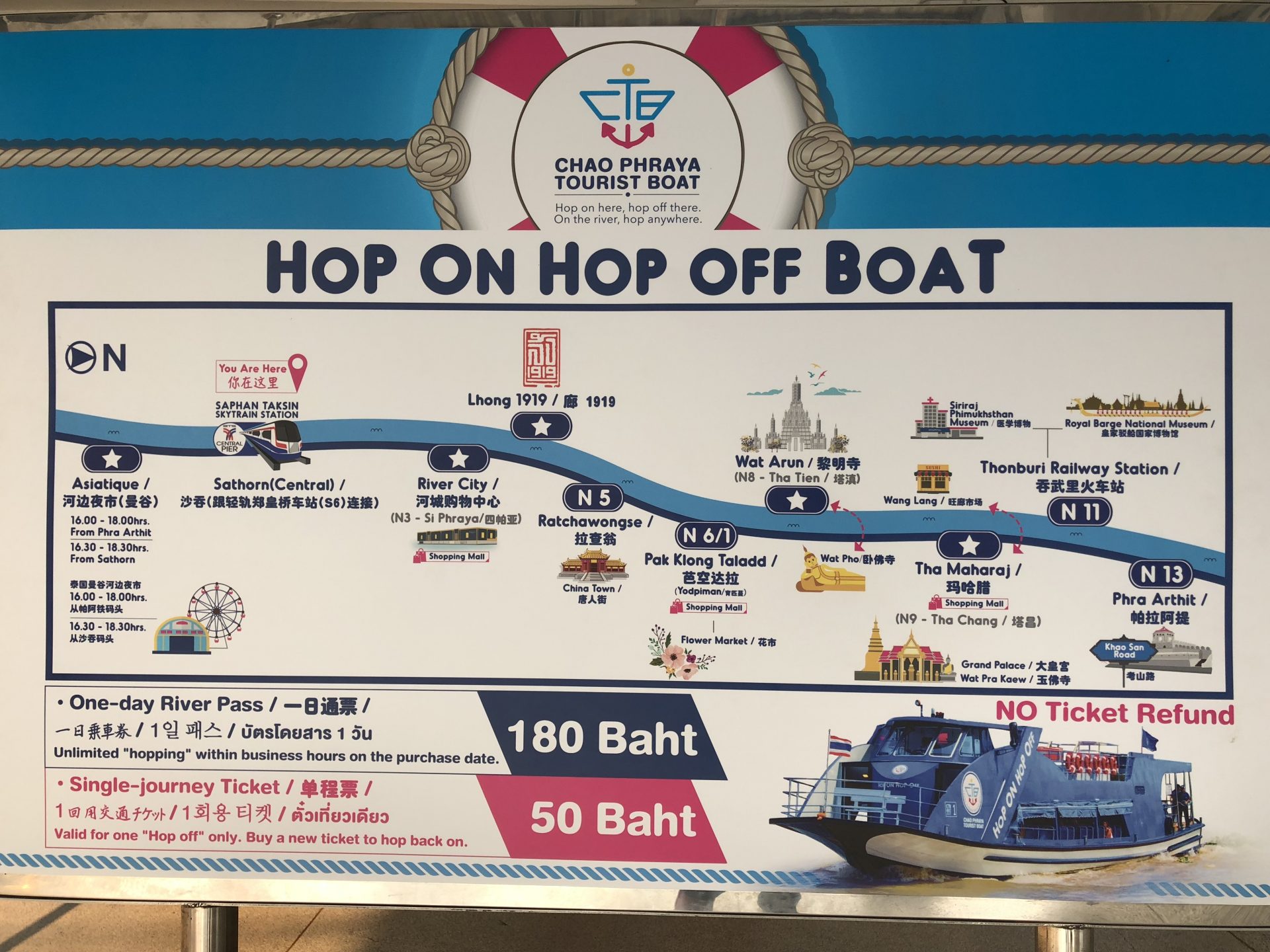 (Bangkok, as you might surmise, is very tourist friendly and many signs are in English and Thai.)

The next day, we hopped on to visit the Grand Palace and Temples within. I do not recommend doing this during Chinese New Year. All of Thailand and most of China were trying to crowd into the Grand Palace. Following the example of millions, we doffed our shoes and shoved them onto the miles of shelving surrounding a temple and joined the one, huge, quivering (and sweating) mass of humanity as it fought its way inside the biggest of the temples. I wasn’t sure my feet ever touched the ground as I was buoyed along except that they were dirty later.  No hats allowed and your knees and shoulders had to be covered.  Everyone had on longer pants and long sleeved shirts and it was 97 degrees outside with 2000% humidity. Inside, it was just 2000 degrees. Photos weren’t allowed, so while Thai nationals were allowed to enter a roped off space where they could pray or just stand and ogle; foreigners were borne along trying to soak in everything we were (or were not) seeing.  All I could see was the back of the head of the person in front of me.  It was not a spiritually rewarding experience.

From the outside, the temples are gorgeous.  (You’ll just have to take my word on the interiors.)  The love, art and craft that went into the temple mosaics and architecture rival anything we’d seen on cathedrals in Europe.

Some scenes from the cruise back down the river

And a little night cruising (NOT on a hop-on, hop-off boat):

On our last day in Bangkok, we set out on an early morning walk.  The monks were gathering their daily tithe of food and alms, the scooters were already clogging the roads (and our lungs), the ubiquitous 7-11 (yes, EVERYWHERE) was busy serving breakfast and we marveled at being able to share a slice of daily life in this bustling, exotic city.