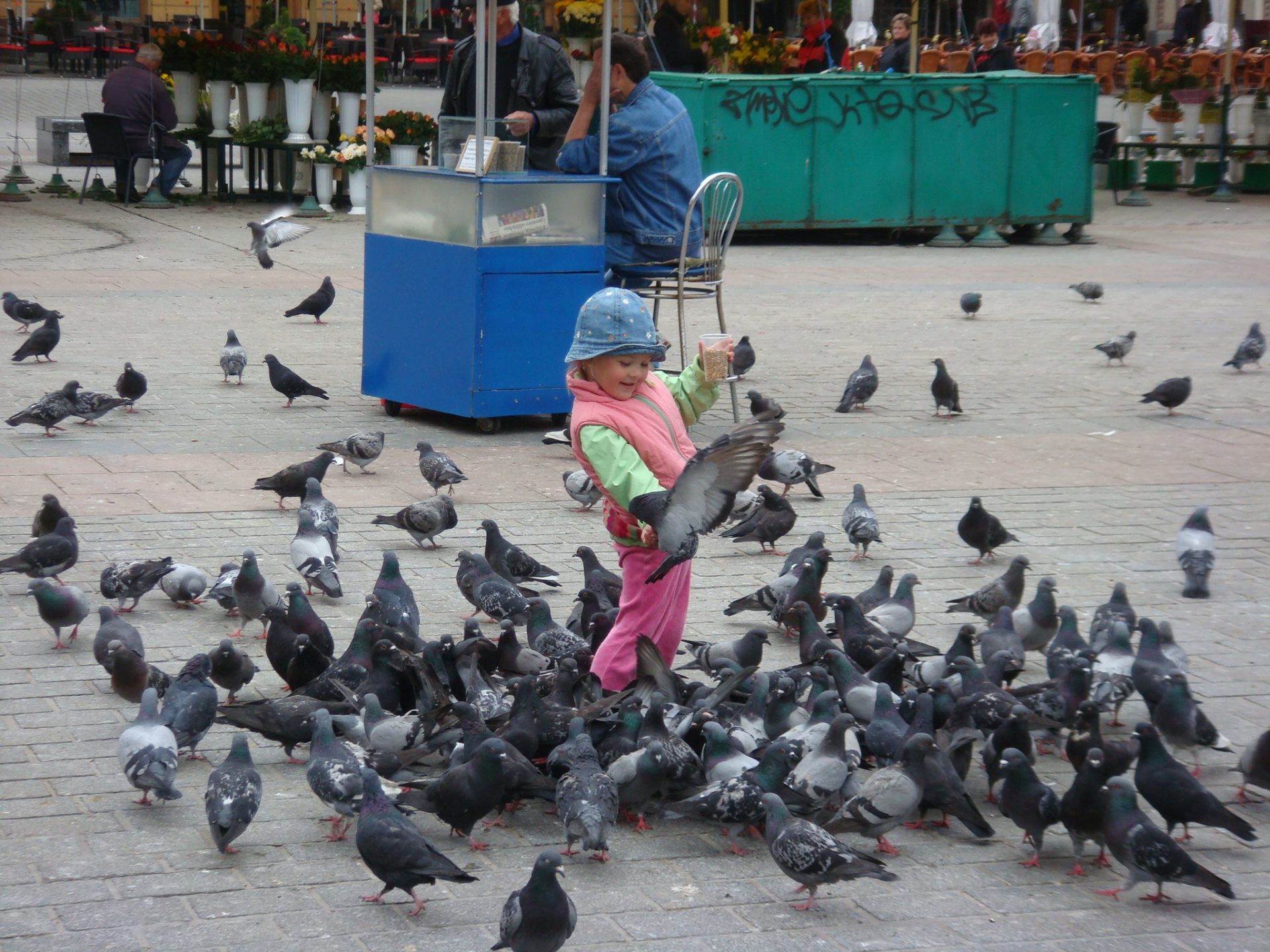 We’re in Krakow!!  And we’re still FREEZING!!  We have had exactly two days of warm weather since we got to Europe 5 weeks ago… I haven’t dragged a single piece of summer clothing out of my suitcase yet… and, to add to the fun, it’s raining.  Despite that, our timing is wonderful – today happens to be the City of Krakow Festival.

Our first clue that something special was happening was when a procession of men in 17th c. burgher costumers paraded into the Basilica of the Blessed Virgin for Mass.  We joined in behind them and the Archbishop – he was the celebrant along with a host of cute-as-a-button Polish priests.

During the offertory, a soprano offered a soul stirring Panis Angelicus and an Ave Maria – I lost myself in a fantasy about my grandmother hearing these same hymns sung in this church in the 1800s and this reverie continued – until the moment I went to the Archbishop for communion and put my hands out, saying “Amen” and waiting for the host.  The bishop looked at me archly (sorry, couldn’t resist) , I looked at him, and suddenly realized no one takes communion in their hands here.  Awkward moment for your me, but the Archbishop took precedence; we recovered and I’m pretty sure he didn’t excommunicate me (although I don’t speak or understand Polish, so he could have.)

Now, I’ve done a bit of research.  The ‘burghers’ are the Cock Fraternity (I kid you not.)  They dress in 17th century Polish costumes and are a shooting association dating from the middle ages.  (Which will explain quite a bit as you continue to read).  After Mass, the ‘burghers’ processed out of church and one gentleman, the magnifico for sure, was wearing an enormous silver chicken around his neck on a chain.  I asked Roger if he noticed the chicken and he said “it couldn’t have been a chicken, it was probably the Polish royal eagle’, (I’d never seen such a chicken-looking eagle).  Later, during a very formal ceremony in the town square, Old magnifico very solemnly removed the giant necklace from his neck and draped it over the neck of the NEW magnifico, and at that moment it couldn’t be mistaken. It was a chicken.  A big, old, silver chicken.  On a chain.  Now around his neck.

(And he was very proud – just as I imagine an American man in the same situation would be.  It’s hard to count how many ceremonies we have in the US where the ceremonial chicken jewelry is passed from one generation to the next.)  (I have since learned that this ceremony is entitled “The Enthronement of the Cock King”; it takes place annually at the City Festival and honors the marksman who won the yearly shooting contest.  Which also explained the constant discharge of rifles and cannons during the ceremony which upset the horses, made women scream (get over it!) and young children cry.  A very noisy and colorful ceremony, all way round.)

There is a legend in Krakow that Smok, the dragon, lived under Wawel Castle (the coronation site of all Polish kings).

He used to make do eating children, cattle and lame knights, until one day, a clever peasant boy fed him a sheep full of sulphur that exploded in his stomach.  To quench the burning, the dragon drank half of the Wistla (Vistula) River and blew up.  As part of ‘City of Krakow Festival, there is a parade in which a Brave Knight riding a unicorn attempts to slay Smok the dragon (there are many, many Smoks in the parade.  Grade school age children make and enter their own Smoks in a competition; the best are in the parade and one is declared the winner.  It was quite a specatacle  – the dragons were SO cleverly designed; each one more beautiful, animated and complicated than the one before.  Unfortunately, it was raining pretty hard, the dragons were getting wet and it was nearly impossible to take any photos.

Part of the festival requires that all the children who come to view the parade dress as knights and princesses.

It was like being in a Lilliputian middle ages.  After the parade, the rain let up a bit and eight Polish paratroopers parachuted (almost) into the square (again, making us marvel over how powerless the lawyers must be in ALL of these countries!!!

Two of the paratroopers dropped into the crowd as they landed and one’s parachute fell onto a big group of people – fortunately, no one’s cigarette ignited the fabric!)  It would have been a little more fun (and more photogenic) if the sun had been shining and the temperature was above freezing (yes, I’m exaggerating – it was in the low 50’s); but it was a delightfully intriguing and amusing day.

In our ramblings, we came upon the arrival of guests at a VIP wedding (and it tugged at our hearts a bit because the wedding party arrived via horse drawn carriage and it reminded us SO MUCH of our wedding!)  This buggy procession, however, had a police escort!  It could have been a movie set – everyone in attendance was beautiful.  I’m wondering how the beautiful, happy couple felt about all the lumpy tourists who are now bound to appear in their wedding photos!

One unforgettable tradition that happens every hour on the town square in Krakow is the playing of the ‘Hejnal Mariaki’.   Legend has it that during a Tatar raid in 1241, a watchman in the Basilica tower saw the enemy approaching and trumpeted a warning to the town.  His alarm was cut short by an arrow that pierced his throat.  To this day, the ‘Hejnal’ is played by a lone trumpeter, high up in the church tower.  His haunting melody ends abruptly at the exact moment the original watchman was slain.  It’s a sad, thrilling, celebration of courage and mortality played for a minute every hour.

Click here to listen to the Krakow Signal (The melody was lovelier as it echoed through the square.  Rog recorded it on his iphone and I’m going to try to upload that.  This ‘official’ recording is not very good.)

When we arrived here last night, we were nearly crushed in the streets by groups of reveling young men – mostly English, it appeared.  We were trying to puzzle out the cause of their appearance in Krakow until we heard that there are world cup qualifying soccer tournaments going on this weekend.  We expect there to be even more partying tonight because four games were played today and there will be losers and winner aplenty.

The drive from Prague to Krakow was interesting, if you like driving and stories of highways. First of all…GPS! Thank God for GPS!!  It weaves easily through the tiniest, twisting, web of streets in all of the ancient city centers we’ve visited so far.    For reasons we’re still puzzling over, GPS took us 2 hours north of Prague and into Poland to hook up with the one highway in this general part of the world (instead of due east, which is where Krakow lies in relation to Prague).  We went up and over the Sudeten mountains – (highest elevations are about 4000 feet) visiting Czech AND Polish ski resorts.  Not exactly Gstaad or Vail, but still… The roads and the scenery were very similar to the lower elevations in the Rockies in Colorado, but a bit greener.

After two hours, we finally hooked up with the highway in a flatter part of Poland (which looked, to us, like southern Minnesota and Wisconsin: green, rolling, fertile farmland).  Traffic was flying – it was worse than the Autobahn in Germany because it didn’t feel as safe.  Drivers left so little room when they changed lanes, we were convinced we were going to get sideswiped more than once.  It was not a relaxing ride. It was just fast.  Soon after we got on the road, we saw a sign that said “Gas. 5km & 148 km”.  We weren’t really sure how to interpret that (was this one manufacturer’s advert?  Or an official highway sign?  It didn’t look like much), so we stopped at the station that was only 5km away.  These are not your usual highway gas stops.  The sign directs you to the nearest village’s gas station, a dreary affair with a pump or two and the requisite mongrel.  Entrepreneurial men show up early each day, commandeer the keys to the restrooms, and then spend the day charging tourists to enter two filthy toilets!  (They’re not about to clean them and they have no relationship with the gas station, so the station owner doesn’t clean it either.  Great system.)   We filled the tank and got back on the road to find 2 hours later that, indeed, the next gas station was 148km away!!!  There were occasional WCs and parking areas, but no gas (and I wish we’d known about the highway WCs – they were free!  Let that be a lesson to you next time you’re driving through Poland.)   We were astounded!  And, even though this highway wasn’t a toll road, there were very few exits –so buying gas when we did was a lucky choice!

Time for a short break to complain about something.  All the countries that we’re visiting are members of the European Union.  That’s a good thing for them.  However, with the exception of Germany and Austria, none of the countries have adopted the Euro for their currency.  We’ve been trying to sort out monopoly money in four different countries with different exchange rates and now we’re just generally confused.  Even Roger’s currency converter is tired. The Euro is so easy; this just seems like stubbornness.  Oops, my American arrogance is showing!  Sorry, little Central and Eastern European countries/economic powerhouses.  Oh, there it goes again.

One final note:  Polish television.  We turned on the TV late last night and found an American movie playing.  This was quite exciting because, aside from Star Trek in Berlin, the only ‘media’ English we’ve heard for weeks now has been BBC World News or CNN news.  Very tiring and repetitive, if you’re looking for a mindless break.  So we tucked ourselves into our little Polish beds

(Polish hotels tickle me… picture staying at your elderly aunt’s house – the one who hasn’t bought furniture since the depression.  Even the lamps (and their luminance) are original.  And dealing with anything other than single beds is too much trouble for Polish hotels.  You can either have a room with ‘single, single beds’ or a room with ‘two single beds pushed together’ as a ‘pretend’ double) to watch. And laugh.   The movie was dubbed into Polish (good for the Polish – although it meant we couldn’t understand a word). However, the dubbing was done by only one actor – in this case, a male.  We watched Kate Winslet and Vanessa Redgrave perform emotional scenes in their one, husky male voice.  It was perfect!