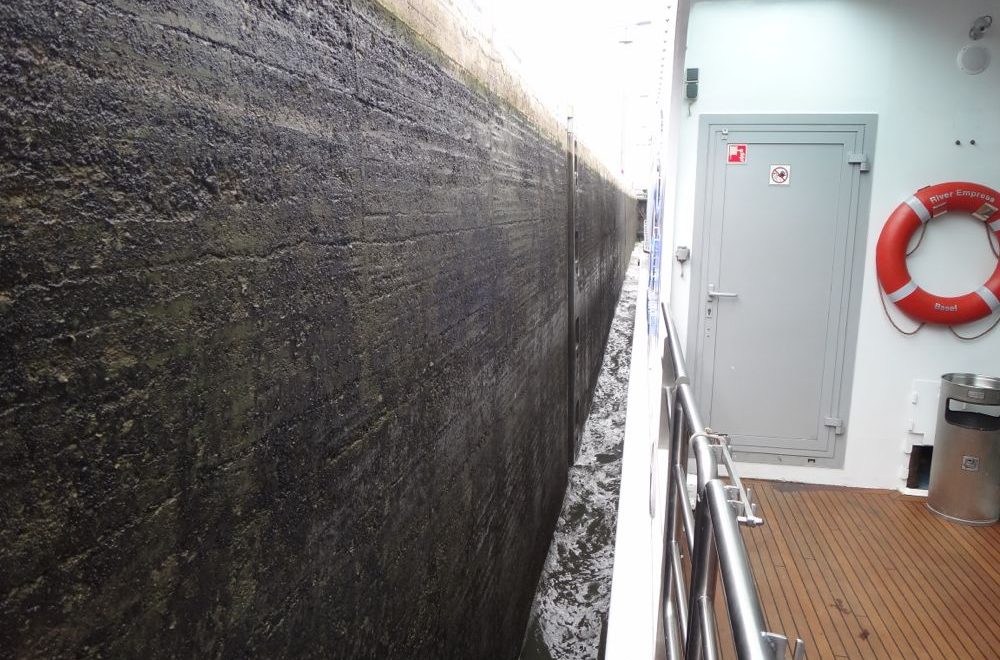 You might be wondering how a huge river boat cruises from Amsterdam to Budapest, since there is a 1332 foot change in altitude and the Rhine, Main and Danube Rivers do not intersect in any passable place.  Then again, if you’re like me, you’ve never given this a thought and you blindly get onboard and hope that on the ‘downward slope’ the ship doesn’t suddenly plunge 1332 feet and ‘presto!, you’re in Budapest’!  This, of course, doesn’t take into account that the ship has SOMEHOW ascended 1332 feet, since, as we all know, (you do know this, don’t you?) Amsterdam is below sea level.

It turns out that there are 67 locks between Amsterdam and Budapest (give or take one or two – I lost count when I slept); most are the typical type:  lock doors are open, ship goes in, lock doors swing shut, lock fills or empties, ship goes up or down, doors swing open, ship goes out.  On this route, however, there’s a series of locks with guillotine doors (see the above photo), in which a giant ‘blade’ descends into the water.  This type of lock construction was necessary because these locks are SO deep that swing doors can’t push the enormous volume of water out of the way to open/shut the lock.  The deepest lock we navigated was a stunning 81 feet!  These photos don’t quite reproduce the eerie feeling of being on a ship inside a dark, tight fitting sleeve while it rather quickly ascends or descends, but they’re a start.  (And we always seemed to be eating whenever we entered a lock.  Either that, or we were just always eating.)

I did find two videos that demonstrate going through the locks:  the first one was taken on a Uniworld ship on the Rhine, but it isn’t one of the locks that we navigated:  (https://www.youtube.com/watch?v=u-7aUiGOu1M.).  The second one is much better, but it’s from a competing cruise line and our captain threatened to stop feeding me if I use it in my blog.  I can stand to lose a few pounds, so I’m taking my chances: https://www.youtube.com/watch?v=NqSubjKaeb0&safe=active.

Alert readers may have noticed that I’ve omitted one key point:  how the ship sailed from the Rhine and Main rivers TO the Danube.    The answer:  the engineering marvel known as the Main/Danube Canal.  The desire for this hook-up has a long history: Emperor Charlemagne was the first to try to build a canal through this section of Bavaria in 793.  In the 1800s, a measly version was actually built, but without today’s knowledge and technology, the darn thing kept draining and was ultimately bombed to smithereens during WWII.  The modern canal was completed in 1992 and is the highest point on earth that can be reached by a ship sailing from the sea.  If you’re a techy type, Wikipedia does a great job of describing all aspects of the Main/Danube canal:  http://en.wikipedia.org/wiki/Rhine–Main–Danube_Canal