Today, a gathering of random observations (because my brain has been addled by Bavarian pretzels and can’t come up with a unifying theme for this post):

Random Observation #1:  When you think ‘surfing’, your first thought is ‘Munich’, right?  Yeah, me neither.  Even being a geography challenged American, I know there’s no ocean in Bavaria.  (Although there are rather a lot of muscled blonde guys running around here.)  Smack dab in the middle of the city, the River Isar works itself into a total lather, thus creating the exact opposite of The Longest Wave.  Observe:

Random Observation #2:  Just about anywhere in Europe in late April/early May, you’ll see signs announcing “Spargel” (just to be clear, you’ll see that particular word only in countries where German is spoken.  Other countries, wisely, will use their own language to announce the beginning of “Asparagus” (that’s American English) season!)  So, big deal, right?  We have asparagus year round.  Well, not THIS asparagus!  (Please don’t be put off by its HUGE paleness.  This stuff is delicious and addictive.  And huge.  And pale.  They should be sold with condoms.)  This was my dinner plate on Roger’s birthday:

If your bathtub has a gas burner under it and you’d like to cook Spargel at home, here’s how you’ll find it in the marketplace in spring.  This, of course, is “Deutscher Spargel”.  Not, for instance, “Ooh-La-La Frenchy Spargel”.

Random Observation #4:  Maypoles are a huge deal in Bavaria – and tradition has it that on May 1, neighboring villages will pillage your community in an attempt to bring down the Maypole that you only just that morning erected.  We must have checked out Maypoles in at least 20 towns – and I don’t know if anyone has mentioned to the by-now frustrated ‘neighboring villages’, but those suckers seem permanently affixed to the ground.  And, unless those Maypoles are being taken down on April 30th and re-erected under dark of night on May 1, (with cement) we’re saying THEY NEVER MOVE AT ALL.  We’re very suspicious of this whole ‘tradition thing’ and wonder what else the Germans are trying to put over on us.

Random Observation #5:  Have you ever seen this?  If you’re lucky enough to have attended a winter Olympics, then you’ve seen an Olympic sized ski jump (but have you also seen its siblings – Junior, Shrimp and Thumbelina?)  These are in Garmish and when you picture yourself ascending this blade and then hurtling down it with the INTENTION of launching yourself into the air, well,…. we went to the biergarten and calmed our nerves. 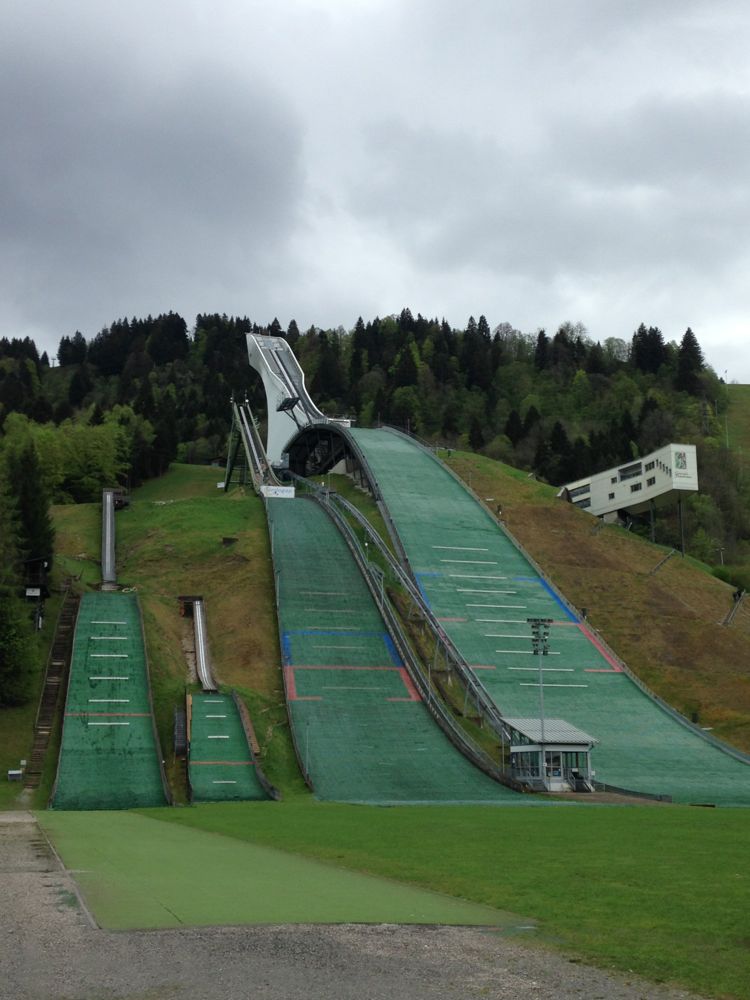 Random Observation #6:  (well, this is really a tiny shameless namedrop disguised as a random observation)  Did you know that you can eat breakfast with Spock and even though you stare at him really, really hard, he will not know what you’re thinking?  Yeah, sitting next to us at breakfast this week was this guy –

and he had NO idea I was thinking “Who the heck is that?  Don’t we know him from Minnesota?”)