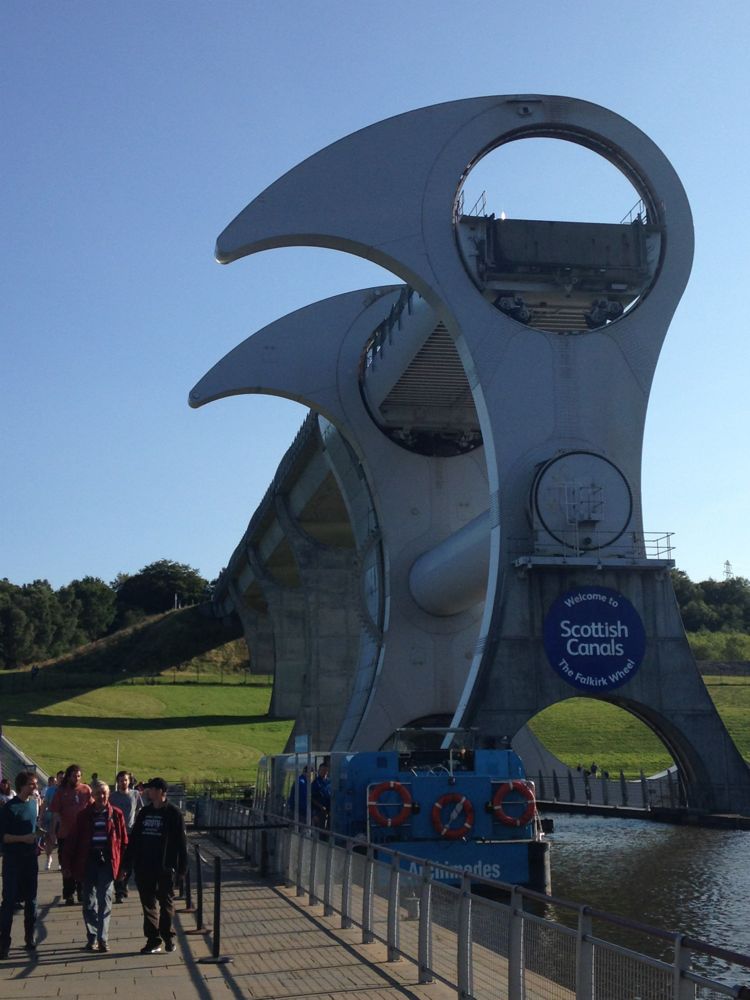 The British have an unequalled fascination with (and apptitude for) enormous structures that move.  (In addition to Henry the 8th.)  Witness “The Eye” in London, a huge ferris wheel on the River Thames that is now iconic.  We found a few more mind-boggling engineering feats operating in Scotland and Northumbria.

When your rivers don’t quite match up because of height differences,  you build a lock, right?  (I don’t mean “you”, unless you are the figurehead for the Army Corps of Engineers or something similar)  Not so in Falkirk, Scotland.  There, because of a height difference of 79 feet between  two canals that connect Glasgow and Edinburgh (or DIDN’T connect, as the case may be – I’m guessing it didn’t take too many screaming boat plunges before the locals decided there had to be a better way), engineers devised The Falkirk Wheel, a rotating boat lift that lowers and raises boats so they can continue on their merry (but slow) way (it IS a canal, after all!) to and from Scotland’s major cities.

Without making you sit through the entire 15 minute thrill ride, I’ve condensed the spin of the wheel to 4 photos.  I think you’ll get the idea…

And, finally, the boats exit the wheel.  Wheeee! (Well, that’s what the passengers would be saying if it were a 15 second ride instead of a 15 minute one): 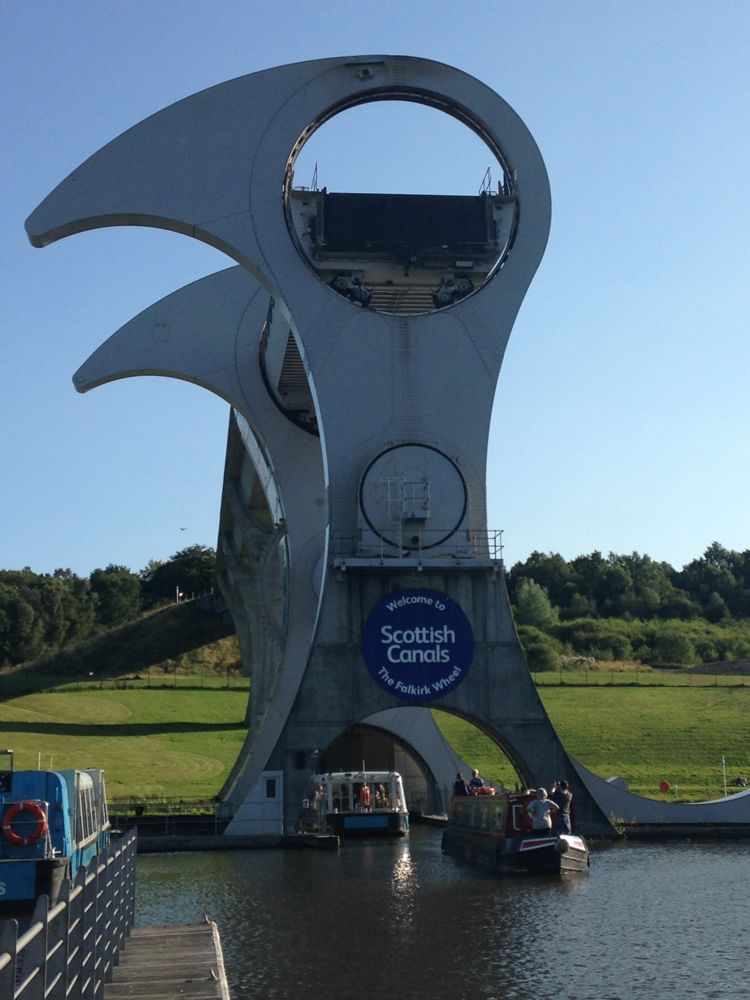 Sadly, there’s still a 36′ difference, so the boats must endure a series of locks (maybe it was a miscalculation?  Two different teams (top and bottom)?) before they can TRULY be on their merry way.  Still – it’s the only one of its kind in the world and it is amazing to see it spin.

Further south, in the industrial but re-energized city of Newcastle-on-Tyne, engineers thought long and hard about how to get boats to fit under their bridges.  (Let’s not even talk about the 4 existing bridges I can see from my hotel room.)  “Hmmmmm”… they said… “how do other bridges do it??”  (This is an artist’s recreation.  Not to be confused with reality.)  “I know!”, shouted the little engineer that til then had been seated on a three legged stool in the corner, quietly nursing his 6th pint of ale, “let’s make it tilt!”  “Hooray!” said all the other engineers.  Then they all went home to their real jobs as doctors and lawyers.

Not to belabor the ’15 minute thrill ride’ aspect of these moving behemoths, but here, reduced again, is the GMBridge doing its thing…

We waited anxiously for the Queen Mary or the Exxon Valdeez or something similary impressive to make its way up the River Tyne, but, alas, a little tourist tugboat chugged its way upstream only to turn around and chug its way downstream, passing under the bridge twice while all the passengers cheered:  “Hooray!”  Just like the engineers.