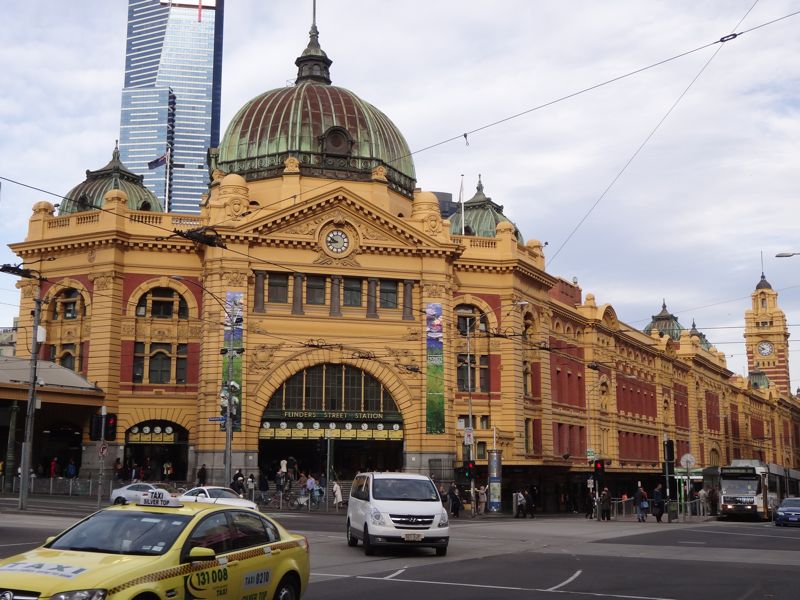 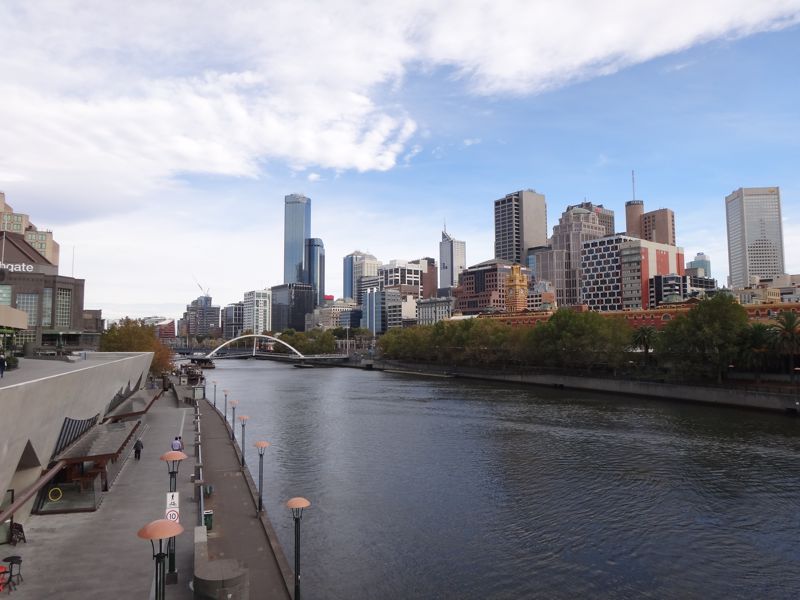 Trying to take photos for this posting was an exercise in frustration (and forgetfulness). Read on for an explanation…

We spied Darth Vader sitting hunched over a tiny cup of coffee at a café in Melbourne, trying to look inconspicuous. He’d apparently been successful until eagle-eyed Roger said: “Look! There’s James Earl Jones!” This sighting would have been much more surprising had I not seen Mr. Jones, along with Angela Lansbury, in “Driving Miss Daisy” the afternoon before. We shook hands and chatted for a few moments; he was quite gracious. At his age, he looked a bit more Jabba-the-Hutt-ish than Darth, but, oh, that voice! I didn’t ask for a photo, (yes, I forgot!) but I do wish I had asked him to record my voicemail message. (“Thank you for calling. I am your father.”). In lieu of a ‘real’ photo, this will have to do. (I gave the play five stars.) 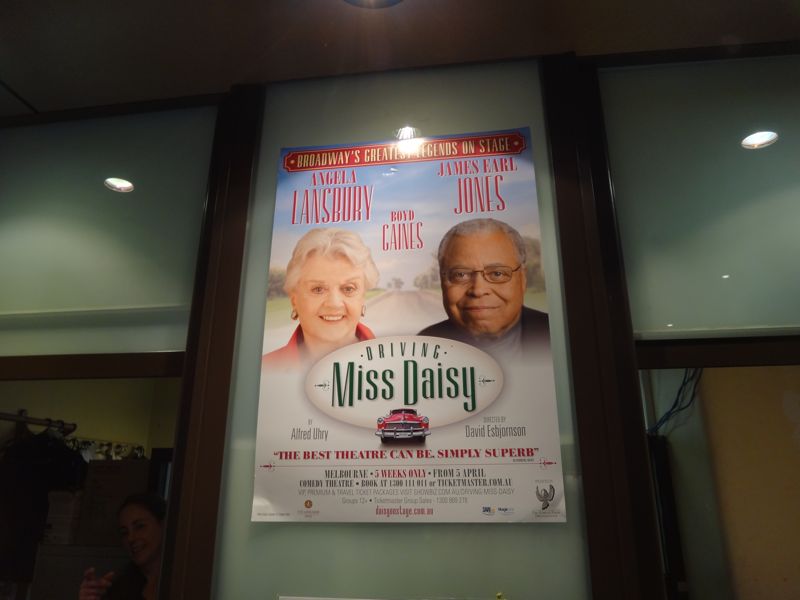 Melbourne is a young-feeling city that straddles the Yarra River and which it had ignored as an asset until just a few years ago. Today, high rise condos and entertainment complexes blanket both banks and there is a pretty river walk on the recently developed south side. One of the newer north side structures is Federation Square, a complicated architectural statement that houses three interesting museums, one of which – ACMI (Australian Centre for the Moving Image) was currently exhibiting iconic costumes from Academy Award winning movies. I couldn’t miss this. (I assumed that this mass of Americana was to help us prepare for our return home in a few days.) You may not share my enthusiasm, but to see the marvelous purple dress that Barbra wore in “Funny Girl” and the gown worn by Vanessa Redgrave as she married Richard Harris in “Camelot” (my two favorite movies – now you know!) as well as Audrey’s black sheath from “Breakfast at Tiffany’s” among other winners, was thrilling to me. Photos weren’t allowed. So you get these views instead:

“Marvellous Melbourne” (as it was known in the 1880s due to Australia’s gold rush) was rapidly developed and is home to elaborate Victorian architecture and grand public buildings. It’s also home to the oldest building in Australia, Cook’s Cottage, built in 1755. (You’ve got to love Australia. The oldest building wasn’t built there – it was shipped, brick by brick, from England, in 1937. It’s the family home of Captain Cook’s parents.) You’ll see from the photos below that most of Melbourne’s central city is criss-crossed with tram wires, adding a retro look to most of my photos.

A little note about the Grand Hyatt Melbourne, a beautiful place but the dimmest hotel ever. Perhaps Hyatt was trying for atmospheric lighting, but they went waaaay overboard. On even the sunniest day, the soaring lobby was as dark as an old cathedral. A miner’s cap would have been useful. I must have been the first woman to stay at this hotel; surely surely another traveling female would have demanded more than a refrigerator light in the bathroom previous to our arrival.  It was actually so dark that we requested engineering come up and have a look.  “Just the way it is, mate”, he said affably as he felt his way towards the door. Fortunately, there was one bright spot at this Hyatt:  concierge Chris Filcher.

Chris helped me organize Roger’s birthday, among other tasks, and he was un-stump-able. It’s only because of Chris (and the person smart enough to have hired him) that we enjoyed our stay at this hotel.

To date, we hadn’t seen a kangaroo, a koala, or a cassowary; so we took ourselves off to the Melbourne zoo, where we saw all three. Happily, the cassowary was in a safe and secluded spot in the aviary – waiting patiently to eviscerate someone, but a mob of kangaroos (along with a flock of emu)(and yes, a group of kangaroos are known as a mob) were in a barely fenced area and quite able (encouraged, actually) to hop and prance freely among the zoo-goers. I did some reading about emu and found that their legs are powerful enough to kick through heavy wire fencing and that they can run at 50mph. A Kangaroo can punch your lights out, kick you hard AND hop at 50mph. And now we’re in an enclosure with both of these animals. Evidence, once again, that there are not enough lawyers outside the USA.

(Note: a few days later, on our drive from Phillips Island to Canberra, we did indeed see kangaroo hopping along the side of the road – a jolly sight when you’re only used to seeing them in zoos. A less jolly sight – the sheer number of them that have been hit by cars and are lying dead on the side of the road. We had been warned about this but almost didn’t believe it was possible. Til we saw it.) 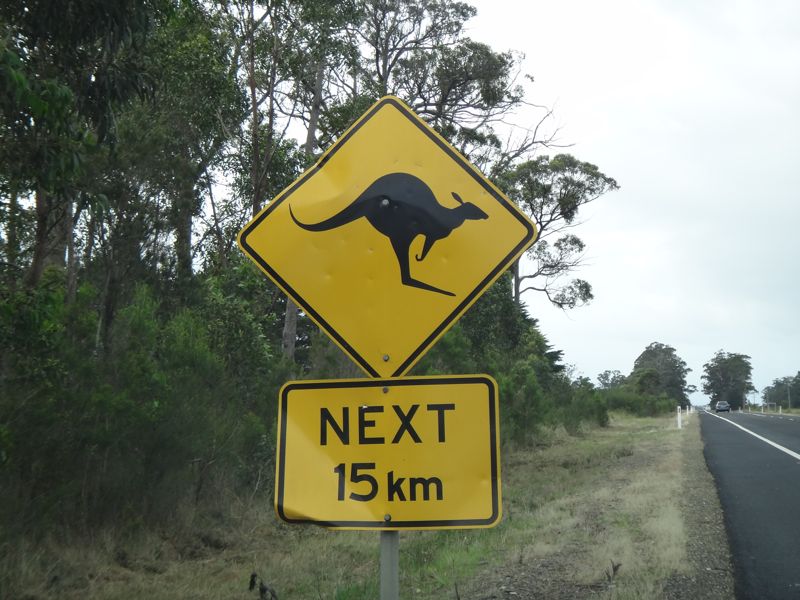