Competition between cities seems to exist in every country, every culture.  Lyon, which can really stand on its own as a center of French gastronomy, still struggles not to seem provincial compared to Paris.  Paris – the City of Light.  Lyon – the City of Lights.  That essential ‘s’!!  To demonstrate Lyon’s dominance in the ‘lights’ arena,  we joined an evening excursion led by a VERY enthusiastic tour guide (with a VERY enthusiastic beard) who convinced us that Lyon was the superior city (you either agreed with him or he didn’t let you off the bus).  In case you’re still in doubt, here are a few examples: 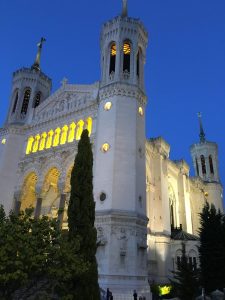 Needless to say, the hilltop cathedral and view of the city at night was spectacular. 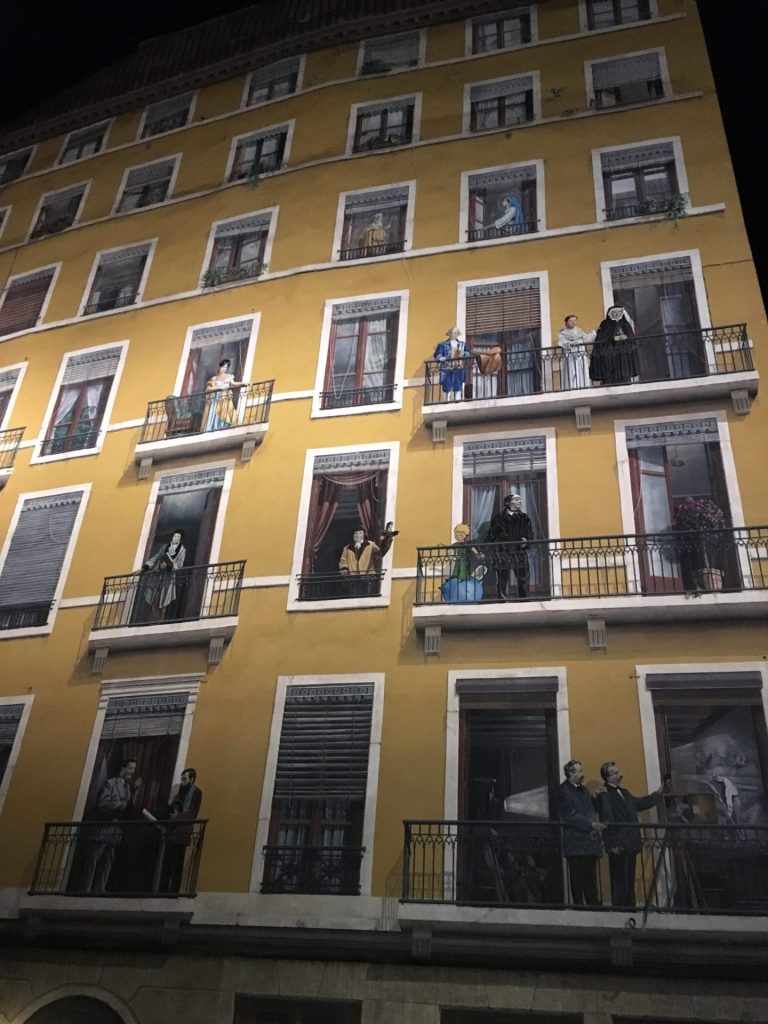 But the much-touted trompe l’oeil building, which really did ‘fool our eye’ at night, wasn’t quite as convincing when photographed.  The paintings are very amusing – the people in the windows and on the balconies are famous – even George Washington appeared among them.  I think the people in the photograph look rather flat, but the balconies look 3-dimensional.  Keep in mind that they’re just painted on a flat brick wall that’s 7 stories tall.

Sadly, the most compelling ‘Lyon by Night’ sight was one I couldn’t photograph – a lovely naked man, standing at the kitchen sink in his second floor apartment, waving unabashedly to our ‘topless’ bus as it drove by.  And, he was, shall we say, quite well lit.

I have tried and tried to upload one last photo – that of the city of Lyon receding into the distance as our ship finally set sail. It would have been a fitting ending to this post, but all you have to do is picture inky blackness with a few lights reflected on the river.  Goodbye, City of Lights.  We sail into darkness.

Next:  Cruising the Rhone – on our way to Tain-L’Hermitage