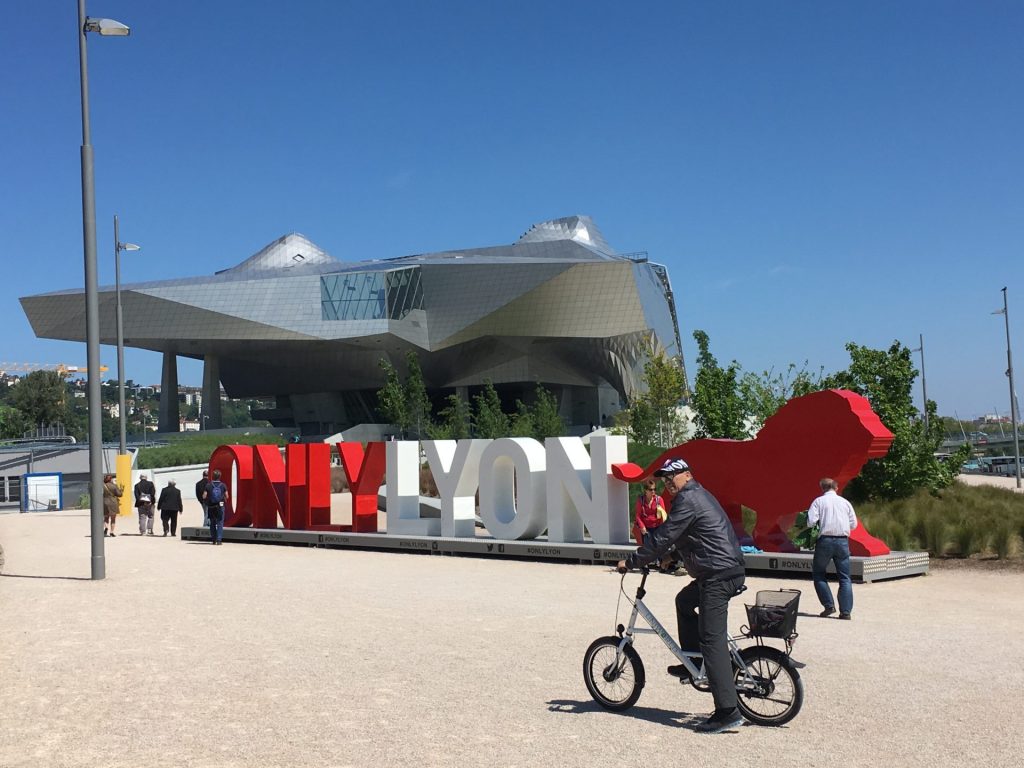 Laying… Lying… You figure it out.  We ended up staying two days in Lyon due to the high water on the Soane River.  And just in case you think I’m lying, here’s a picture of Roger demonstrating how high the water is (not much of a demonstration, I’ll give you that – but you CAN see that the river is lapping the stepped stairway.  It’s apparently high enough to stop a cruise ship.  Or someone wearing nice shoes.)

We commandeered a couple of bicycles and took advantage of the fantastic network of bike paths that traverse the city and hug the rivers.  Our first stop was the stunning “Confluence Museum” (that’s the building in the photo at the top and just below), which not only celebrates the confluence of the rivers Soane and Rhone, but the confluence of the elements of life.  It’s an intriguing museum – exploring myriad ways that humans observe life and death, our relationships to animals, to the universe –  it’s scope is huge and the interactive displays (in English and French, thankfully) really grab your interest.  We spent hours and could have stayed longer, but the gorgeous weather (and the Whit Monday holiday) beckoned.

Along with hundreds of Lyonnaise, we biked to the popular park D’Or (or maybe it had another name. I just made this one up.  I’m too lazy today to do any research.). Like parks…everywhere…this one had a zoo, a botanical garden,  a lake with paddle boats, screaming kids.  Even though I realize I am probably seducing you with my descriptions of this great park, you’ll have to content yourself with this photo I took – the only one in which all twenty thousand Lyonnaise are not in the frame.

After all the excitement of the park, we returned to the ship to relax in our stateroom (wait.  Scratch that.  This room is so tiny, at best it could be described as a ‘townroom’.  Or a ‘failed state room’.  Still, it’s comfy and quiet and someone makes the bed and cleans the toilet everyday.  And I’m not talking about Roger.)