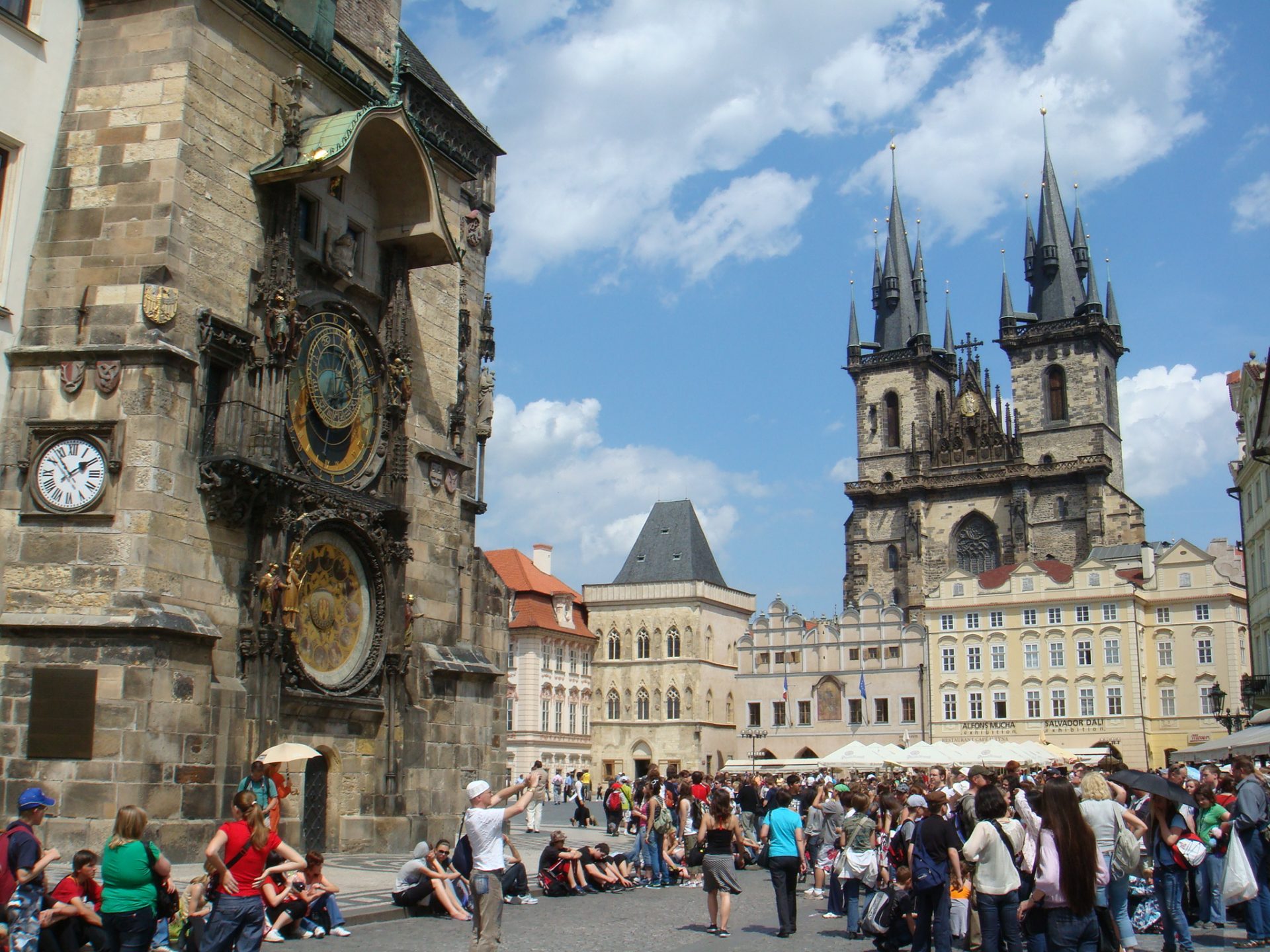 Prague-nosis:  the state of being hypnotized by the beautiful city of Prague.

Straddling the broad Vltava River, ‘modern’ Prague is built atop a Romanesque city that regularly flooded.  These vaulted ceilinged structures form the basements of the dazzling gothic and baroque architecture that sprang up beginning in the 13th century.  (‘Modern’ being a relative term to the Czech people.) Every building either drips with fondant-like ornamentation or massive and muscular supporting corbels. Renaissance sculpture featuring angels, devils, saints and statesmen will assault your eye at every turn (in a good way!)

Prague is also a city of colorful legends. At historic Charles Bridge (serving the public since 1400) the sword of St. Wenceslas is secreted.  During a great crisis, it’s said the Saint will ride his steed to the bridge, uncover the sword, brandish it overhead and call for the decapitation of Prague’s enemies – at which time, their noggins will miraculously fall off.   Which had me wondering if he was so busy preparing for the Feast of Stephen that he somehow missed the Nazi invasion of 1939.   AND the Soviet occupation of 1958.   Let’s hope he’s more alert in the future.

Charles bridge itself is rife with lore. Thirty statues of saints line the sides, with the most famous being St. John of Nepomuk, patron saint of Czechs. Bad King Wenceslas IV (yes, Good King Wenceslas I gets all the positive press) stuffed Father John in armor and tossed him off the bridge for not sharing the Queen’s confession.  Sounds like a trust issue to me.

Picturesque Old Town Square, lined with sidewalk cafes and galleries, is dominated by an astrological clock tower that harbors its own legend. The genius creator, Master Hanus, built a mechanical clock in which, every hour, the twelve apostles appear in two doorways while a bell-tolling skeleton rotates an hourglass, a cock crows and various other characters move about. This performance has drawn crowds since 1570 (the clock was installed in 1470 and suffered technical difficulties for 80 years – just like my laptop).  The 1490 Prague town council was so fearful that Master Hanus would be commissioned to build another clock in a competing city that they had him blinded.  In despair, he laid waste to the clock’s innards – causing a near century of disruption.  Just like the development of daylight savings time.

But the final, and perhaps most unbelievable event involves tripping into St. Nicholas on The Square Church on a sunny Wednesday afternoon and finding the North Dakota State University concert choir filling the cavernous space with the music of angels.  (That’s the church interior, left.)  Legendary!

Note:  The photo, below, is the National Museum – a photogenic pile if ever there was one.  The Museum used to sit at the very top of Wenceslas Square – an enormous venue for festivals and gatherings in Prague.  The Soviets decided they didn’t like the possibilities of this square, so they constructed a major highway directly in front of the museum – making it  inaccessible from the square itself.  (There are now pedestrian tunnels, but the highway remains!)