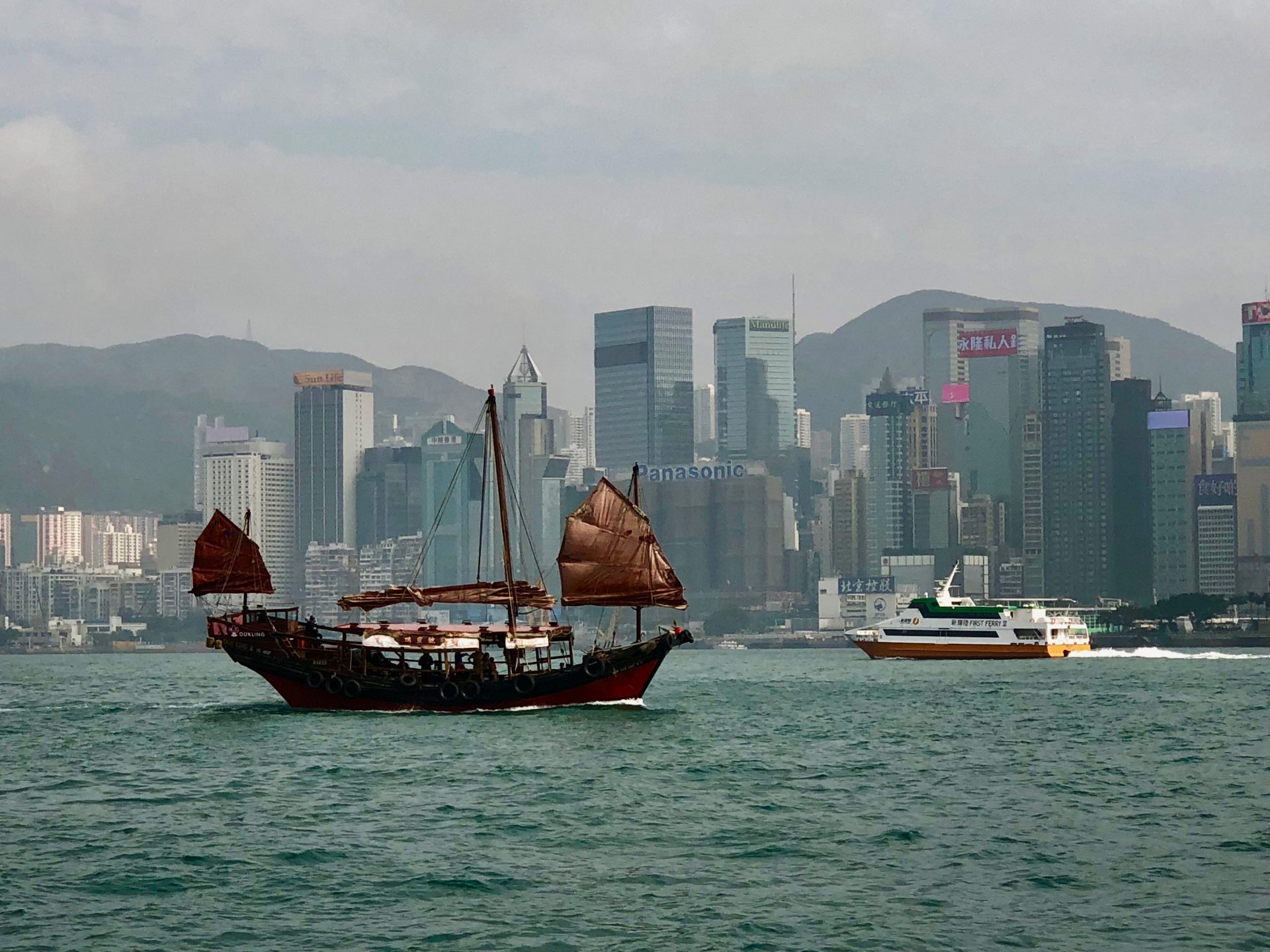 After sailing through 36 hours of dense fog (scary!  Particularly when our Russian captain said “I don’t like this” and “there are SO many boats ahead that if told to stand still, I will”), we started to see the outlines of skyscrapers in the mist.  Then more.  And even more.  This went on for an HOUR.  Hong Kong!

Let me get this out of the way first:  put Hong Kong on your bucket list.  It still clings to many of its British Customs, so if culture-shock is not your ‘thing’, you’ll love Hong Kong.  And even if you like a little shock, Hong Kong will still deliver.  Ancient Chinese culture juxtaposed with ultra modern technology is a way of life here.  In one day you can cruise Aberdeen Harbor on a creaky, old sampan and, later, rocket up to the 105th floor of the International Commerce Center, 8th tallest building in the world.

The sheer number of high-rises in Hong Kong is boggling.  7,840 high-rises have been built since 1938.  There are officially 1303 skyscrapers (taller than 328 feet, or 100 meters); 315 of those are 50 storeys or higher making New York City look like a middling metropolis by comparison.  And most are residential.

Fun fact: In Hong Kong, there are more people living at the 15th floor or higher than any other city in the world.  Which leads to road construction like this: 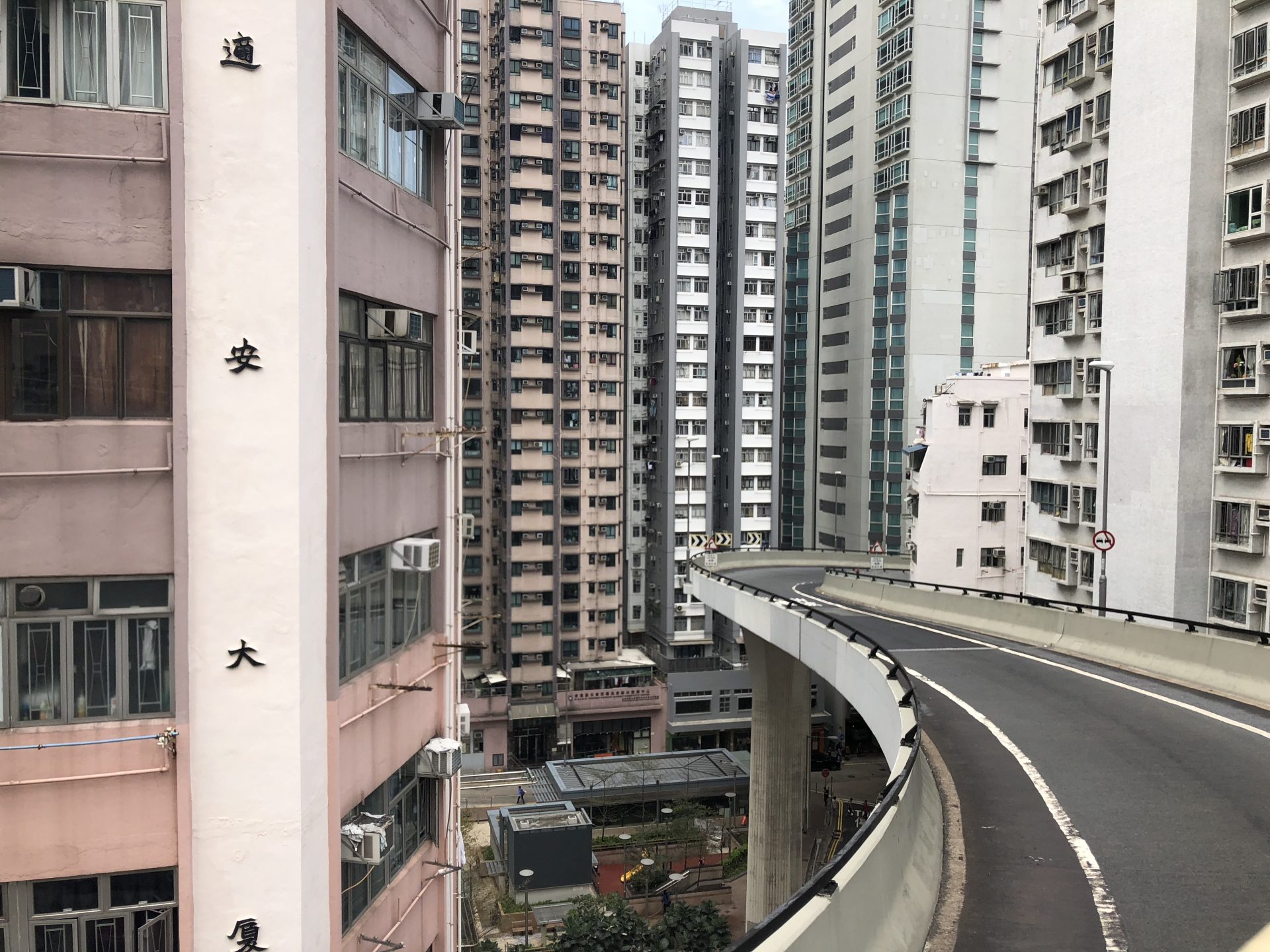 Hong Kong is made up of 3 areas:  Hong Kong Island, the Kowloon Peninsula (sharing a border with mainland China) and the New Territories.  The Island of Hong Kong is ringed with beautiful beaches and scenic bays; we opted to visit these on our first day because the skyscrapers were still socked in with that ever-present fog.  (See it snaking over that hill, below?)

The genesis of the name “Repulse Bay” is lost to time, so we decided it earned its name by ‘repulsing’ people who didn’t have enough money to live there.  (Interestingly, our guides insisted on stressing the square foot prices of properties all over Hong Kong – clearly a source of pride for the locals.  Since I know you’re wondering – the price of a condo or townhome in Repulse Bay starts at $6,500USD per square foot.  Kind of repulsive, no?)

It being March, the beaches were empty although the temps were pleasant.  We lingered at the lovely “Excuse Me” beach for a bit. 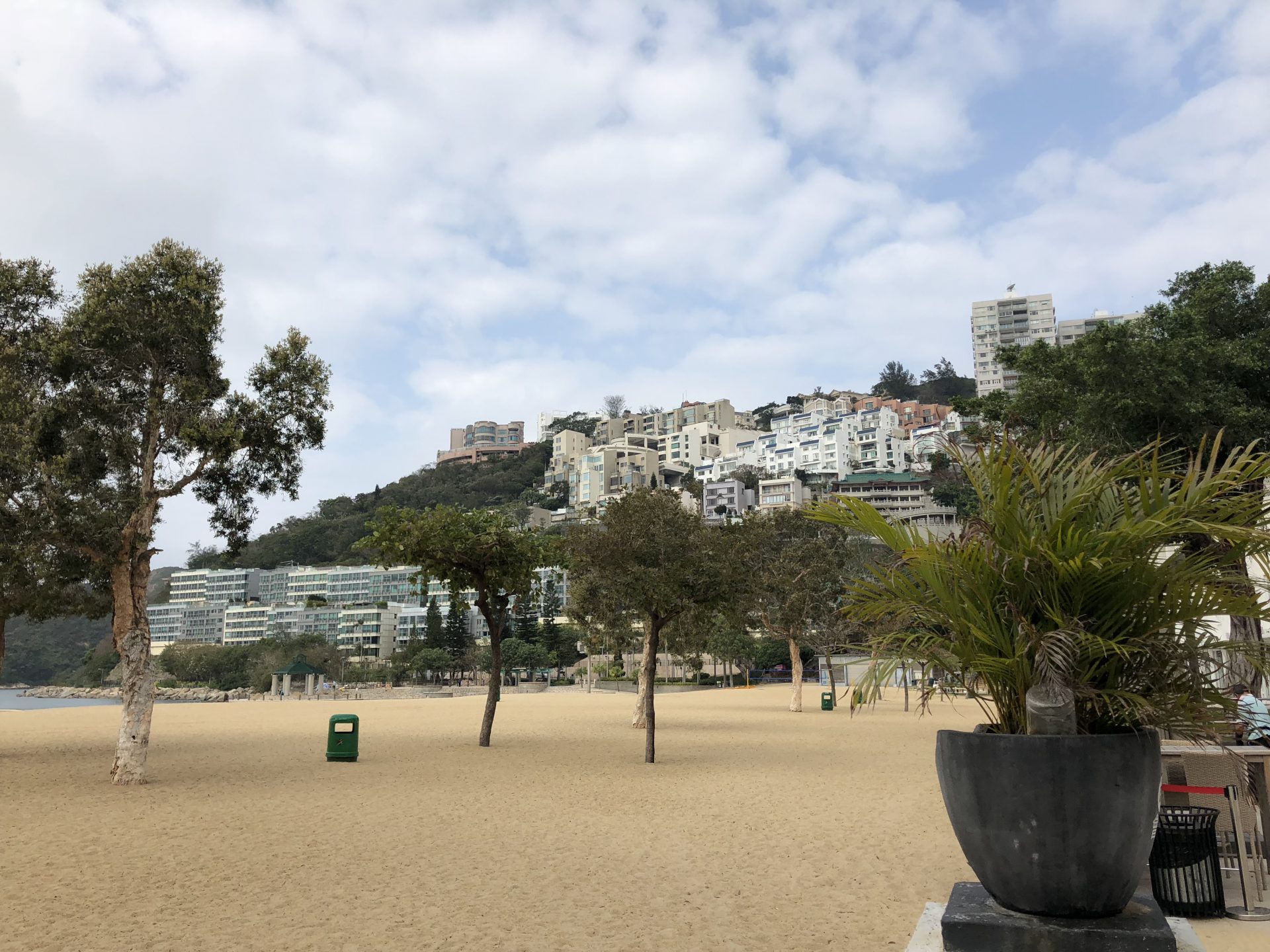 It’s called “Excuse Me” beach because, in the summer months, in order to walk the beach OR enter the water, you’ll repeat that phrase all day long.

Dragon myths dominate Chinese culture; the extent to which they’re indulged stands in counterpoint to the lifestyles we observed.  For instance, myth has it that a dragon lives in the hills behind this new condo building.  The dragon MUST be able to get to the water to drink.  In order not to anger the dragon, a hole was designed in the building.  Up to this point, no one was able to build on the hill because they couldn’t figure out how to keep the dragon wet and happy.

In Stanley, a beach and market town further along the coast, a noontime New Year’s celebration was in full swing, with the happy, thirst-quenched dragon out of his hole and doing a little pole-dancing.

In Aberdeen, a waterside district, we boarded a sampan and floated humbly among mega-million dollar yachts.

Seeing the Jumbo Floating Seafood Restaurant, a local landmark, in the harbor, we thought it would be great fun to have lunch there… 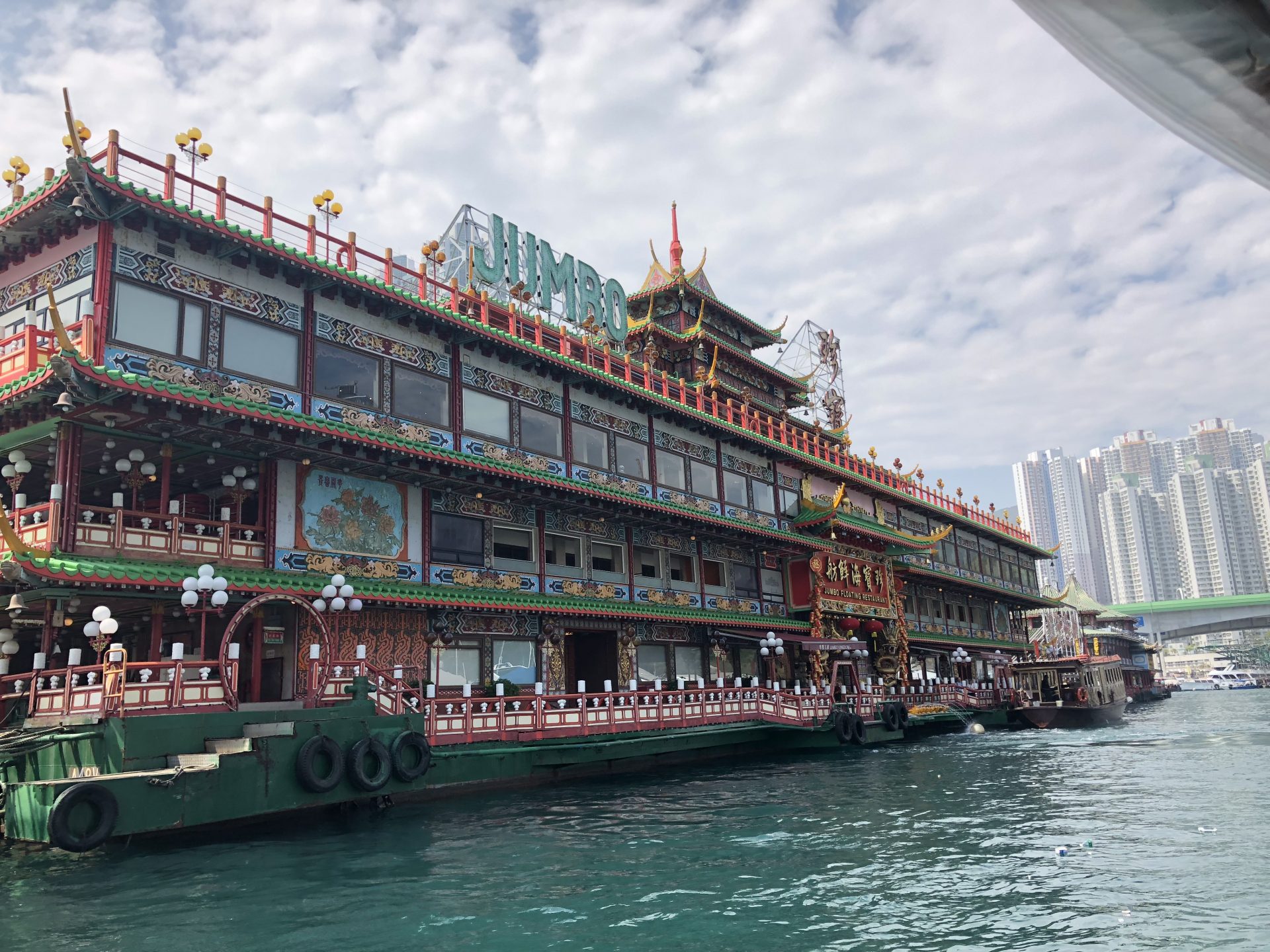 until we sailed past the kitchens behind it… 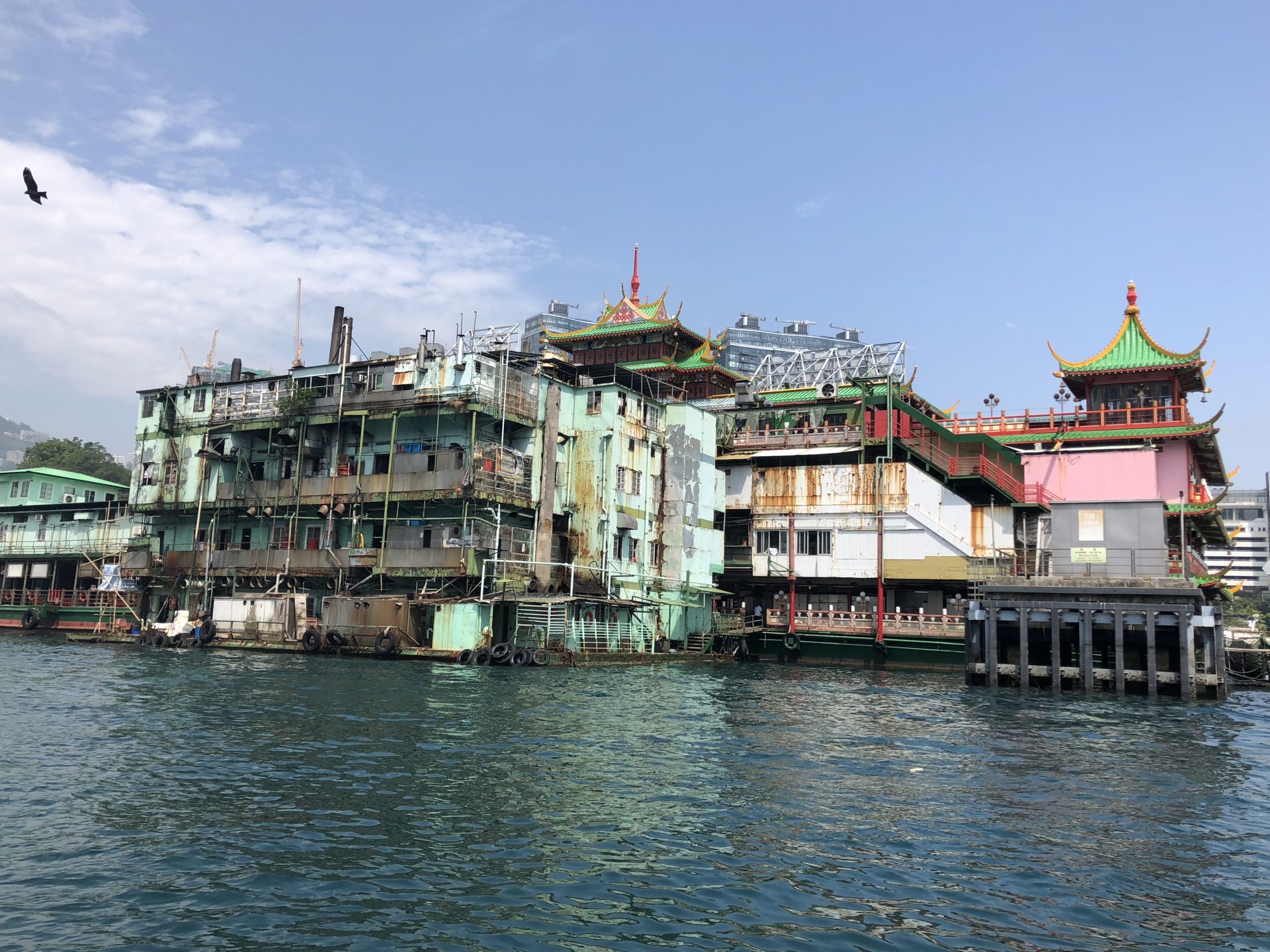 Attempting to capture the energy and images of the city center was difficult.  Although over 7 million people live here, nothing ever seemed crowded.  Still, the streets bustled with small shops and restaurants and shoppers streamed into cavernous shopping malls.  Familiar banks, brokerages and corporate HQs were adorned with red lanterns and flowered New Year dogs.  Business names were often a chuckle-inducing conceptual mish-mash.

As magical as Hong Kong is during the day, even more jaw-dropping magic happens each and every night along the waterfront during the Symphony of Lights, a permanent light and sound show.  It’s hard (but not impossible) to imagine a US city spending this amount of money every night to illuminate their skyline (Hey, Chicago!  I’m talking to you!!)  ( My video was too big to load, so here are a few grainy stills.)  A captivating video of the show can be found by clicking here:  Hong Kong Laser Show

Our time in Hong Kong was too short; we barely skimmed the surface and it left us wanting more.  It’s on our bucket list to return.  But now, it’s time to sail off to the ‘real’ China. 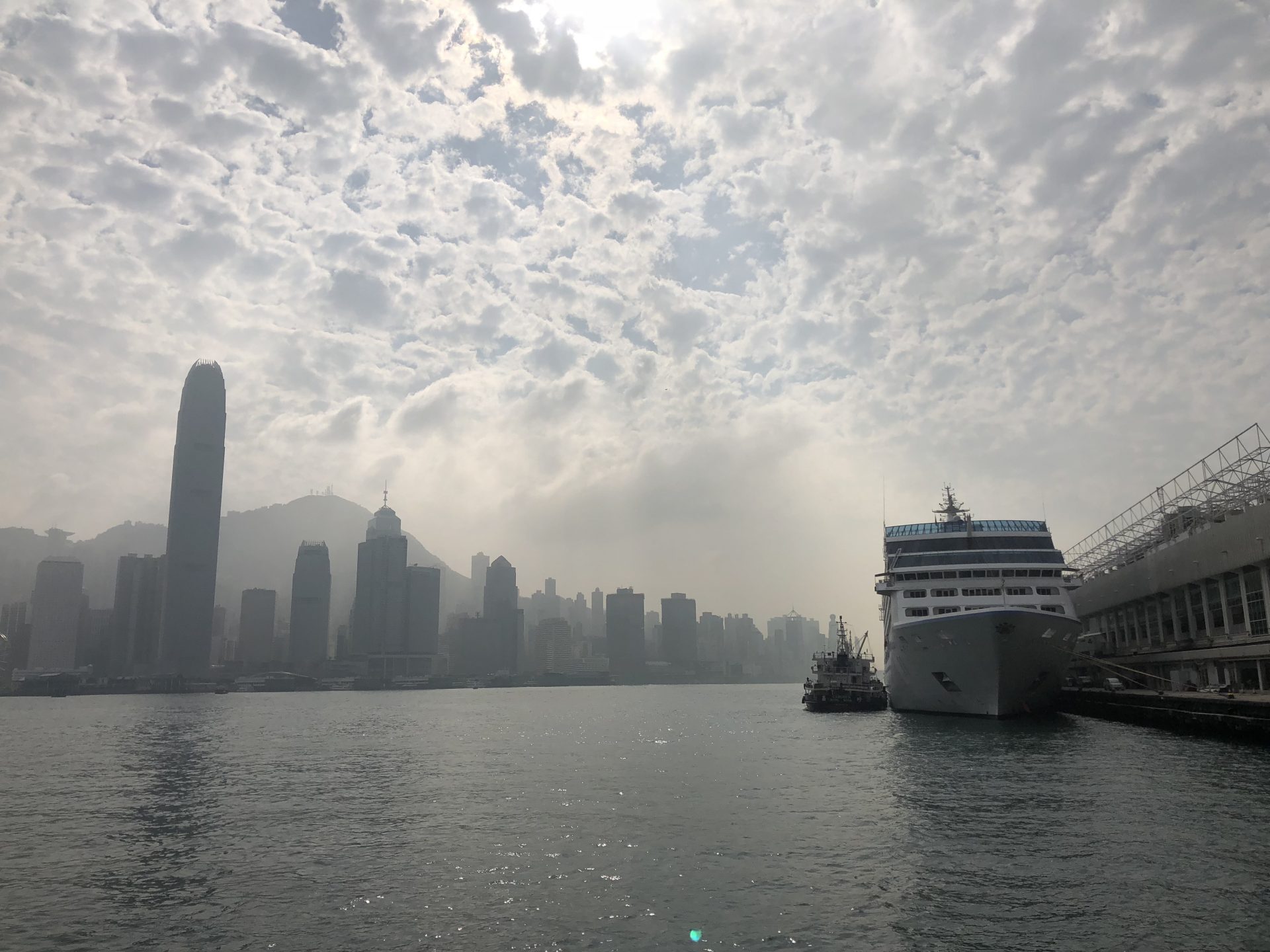