The siren call of England beckoned us across the Atlantic in springtime once again. I know, I know – been there, done that – many times.  And yet, everytime we return, England burrows deeper and deeper into our hearts.  Is it the history?  The civility?  The utter loveliness of the isle?  Yes, yes and yes.  All that – and more.

Cornwall and Land’s End were our first stops (and, really, the first thing you’d reach if you sailed due east from Canada).  Cornwall is known for lashing rain and misty, moody days and it did not disappoint.  To keep water from running into our cottage, we had to build a little dam at the front door.  We squished around quite a bit but still managed to stride out to the edge of every available cliff and look longingly out to sea (a la “The French Lieutenant’s Woman”.  Well, not so much Roger as me.  Even though he does look amazing in a cape!)

On the odd clear day, we could see St. Michael’s Mount, a tidal island that, legend has it, a giant used to walk to and from, stealing sheep and cows (until the causeway was built and he left in disgust because walking to the island in high tide used to be his ‘thing’).  Actually the complete legend is that the giant, blinded by the morning sun, was lured into a pit by a young man named Jack, giving local sheep and cows reason to rejoice; the heavily boarded-up pit can still be seen today.  (Strangely, the cows and sheep have disappeared.)  The island is topped by a medieval church and has been an established trading post since the Iron age. 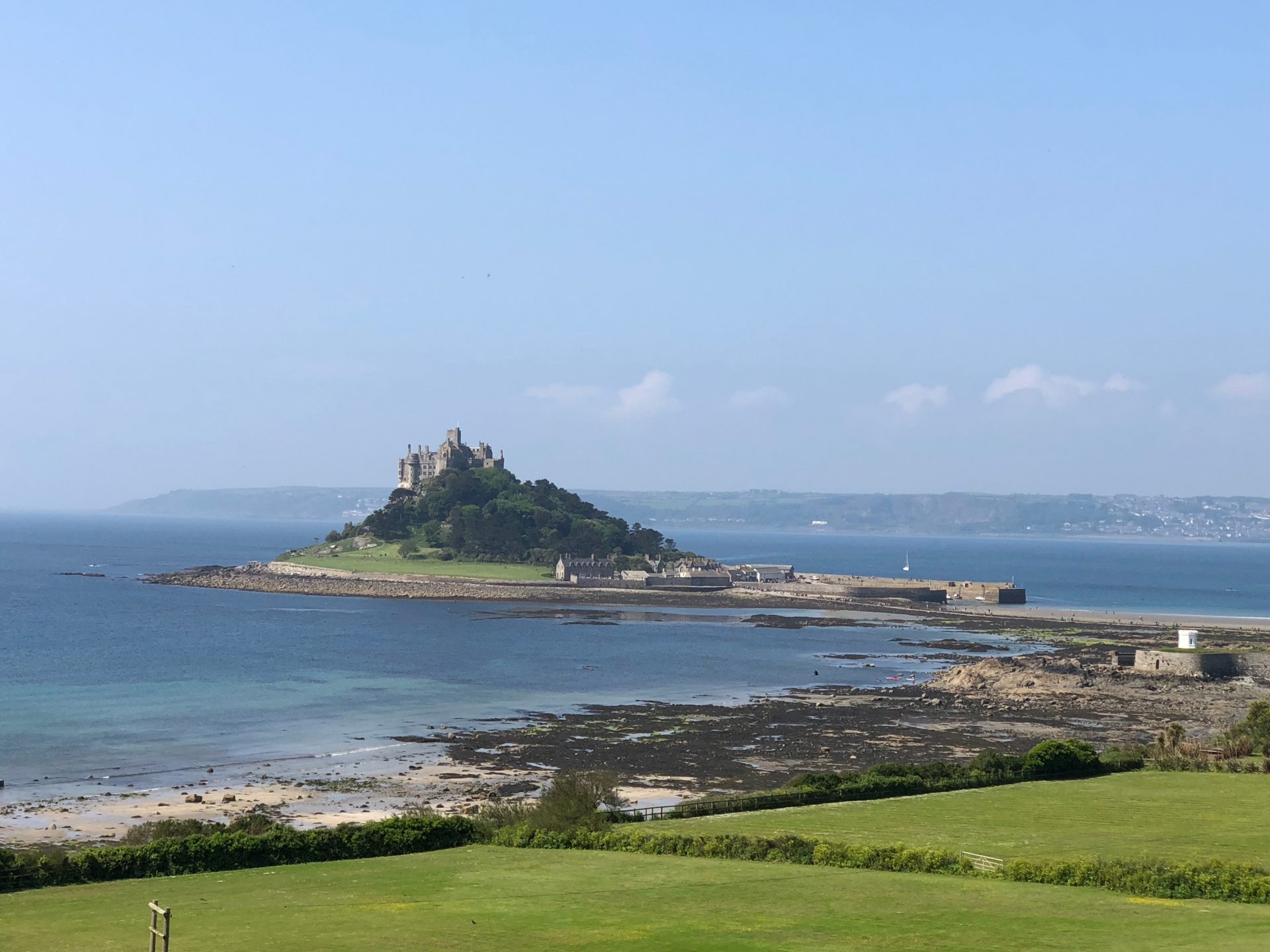 Land’s End has grown into a somewhat tacky amusement park over the years, but you can still stand on the very westerly tip of the country and take a hokey photo under a directional sign.  And not a very good directional sign, at that.  (When I first came to England, in 1971, there was no amusement park or much of anything at Land’s End.  It should be returned to that austere state – it was SO empty and windswept and so very romantic.  It begged you to look longingly out to sea…)

We couldn’t leave Cornwall/Devon without visiting our personal ‘holy’ site – Tintagel Castle, legendary home of King Arthur and his round table.  You’ve been here before with me, so I won’t bore you (much), but there really is something magical about this place (especially considering that recent archaeological digs have revealed evidence of ‘fine dining, wealth and luxury’.  Proof that it was either Arthur’s castle or a very early Ritz Carlton.)  Getting to Tintagel is not for the faint of heart.  It’s rugged and windswept with waves crashing far below and a very lonely but stalwart knight standing guard.  You can’t help but become a believer in Camelot.

We hustled to our next destination, the city of Wells in which resides our favorite cathedral in the entire known universe.

We’d rented the cottage of our dreams – it fronted on the Cathedral green and was in the center of all that’s fun to do in Wells.  Online photos were seductively cozy; we couldn’t wait to get the key and move in.  Here’s our first look:

Yes, it’s only about 12 feet wide and you had to walk through hallways sideways, but it was completely charming, modern and quite, quite long.  The best part of it was the view from the front patio: 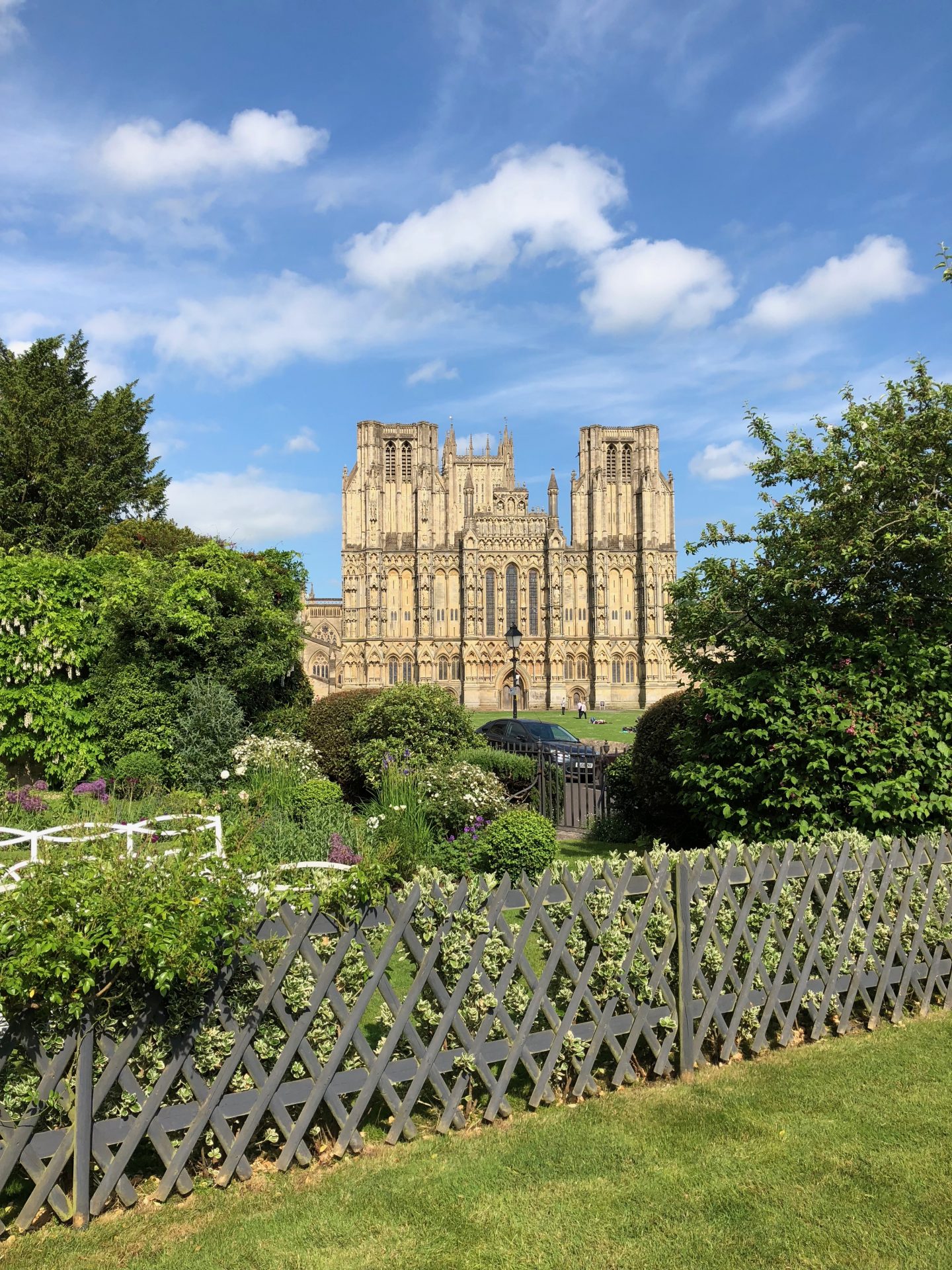 One evening, while Roger enjoyed his favorite adult beverage, I walked over to the Cathedral, found a side door unlocked and crept in.  The massive church was empty – just me and God (and the cathedral cat).   I tiptoed up and down the aisles and sat in pews and misericords in the quire, waiting (hoping?) for a message from a booming Charlton Heston-like voice.  Much to my disappointment, it never happened.  As darkness fell, I started to worry that I could easily get locked in and I remembered that I hadn’t told Roger where I was going, so I VERY reluctantly left because, really, how often is one likely to be in a 12th century Cathedral alone? (with the cat).   It’s an evening I’ll never forget. 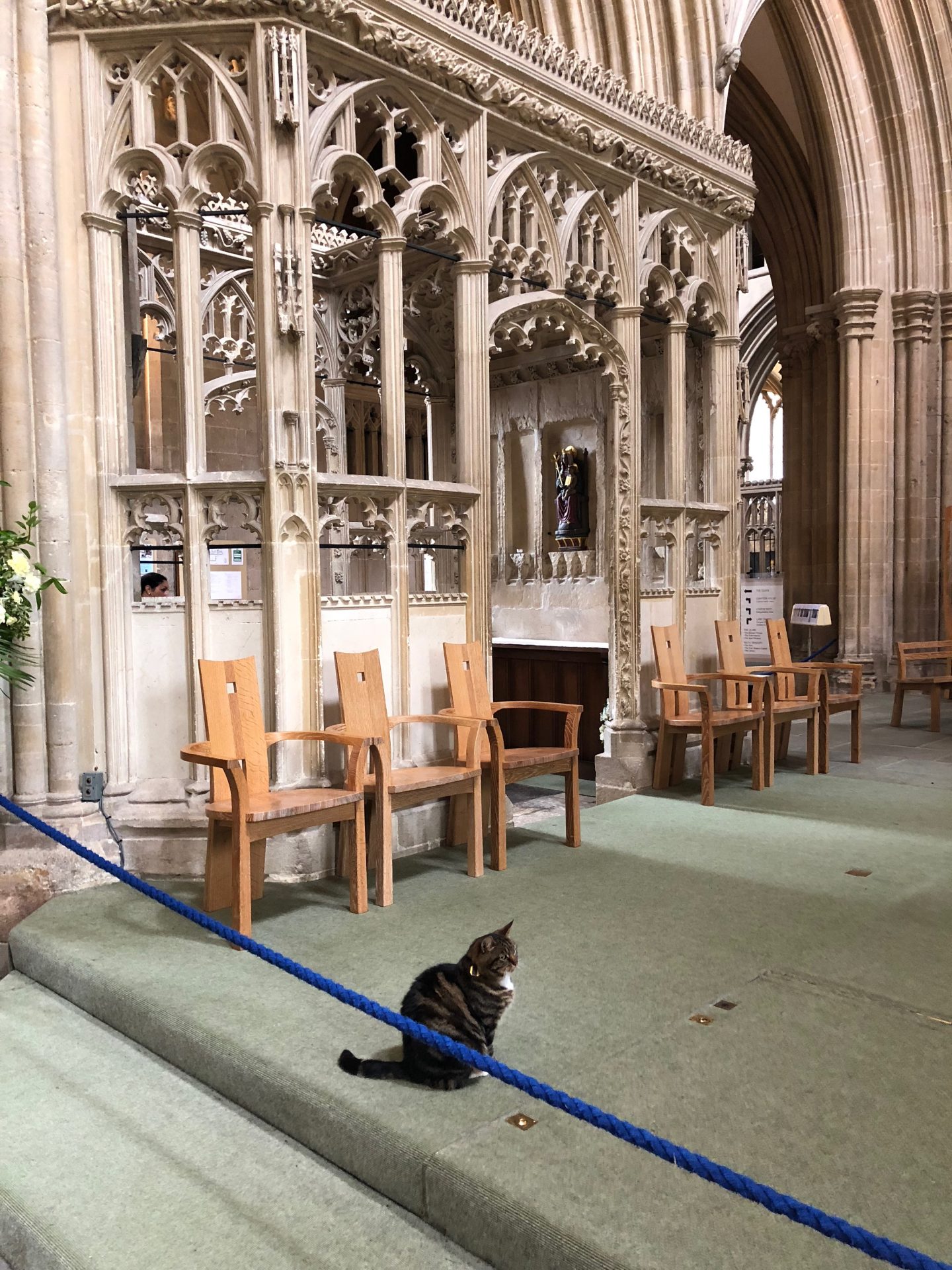 We booked a tour of the ‘High Parts’ of the Cathedral – a ‘behind the scenes’ look at how it was built and how it functioned in the Middle Ages.  We were asked if we were afraid of heights and/or had claustrophobia.  “No”, we lied.  It was the most fascinating 2 hours – of climbing and scrunching and sucking in your gut – but we touched and saw things most mortals never do.  The roof was closed to us, darn it (someone had nearly fallen off last year, necessitating an OSHA like revamp of the roof walk), but we poked in every nook and cranny and breathed dust that hasn’t moved since the year 1320.   Did you know that EVERY SINGLE stone that was used to build the cathedral is signed by the mason and approved by the master mason? These ‘signatures’ are 7 centuries old!  Here are a few scenes:

The icing on the Wells Cathedral cake is the Boys (and Girls) Choir – an ever-changing group of boys with ethereal voices and milk and honey complexions, all students at the Cathedral School. (I personally only like to listen to the boys.  Call me sexist.)   Listen and watch here! (it’s a hot link – click there!)

A trip to England wouldn’t be complete without at least two pokes at their ‘interesting’ names (read: funny!)

We spent the last night at our favorite hotel (in the whole world) – The Manor House in Castle Combe.  If you’re not busy, get yourself to England right now and stay here.  You can thank me later. 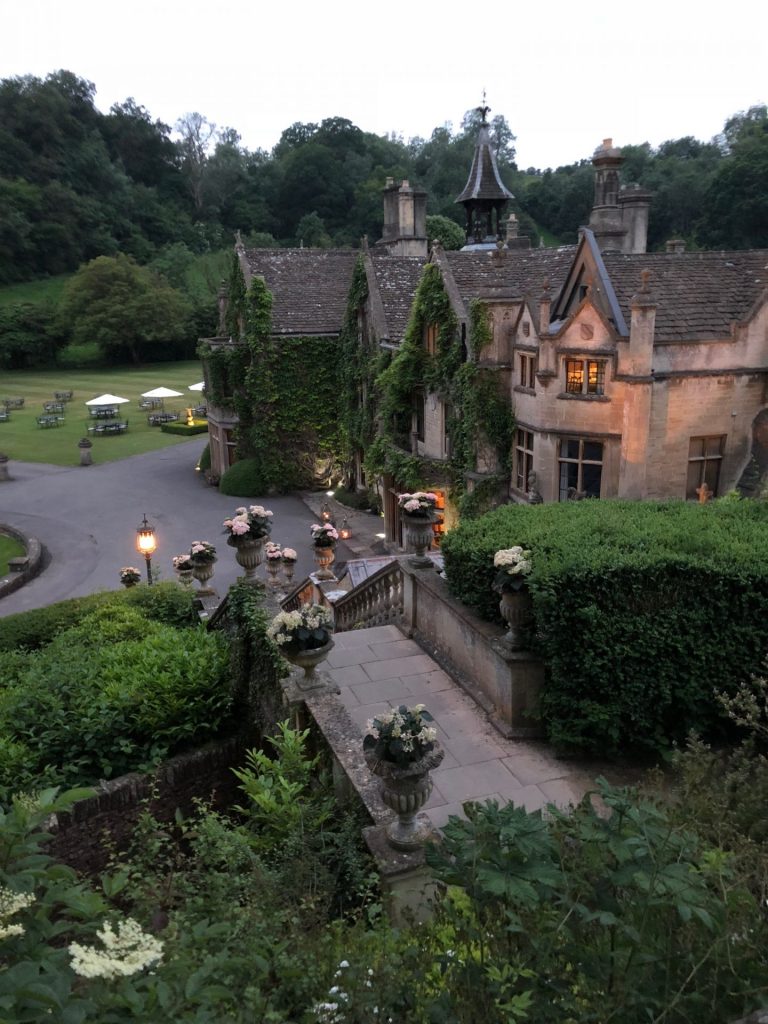 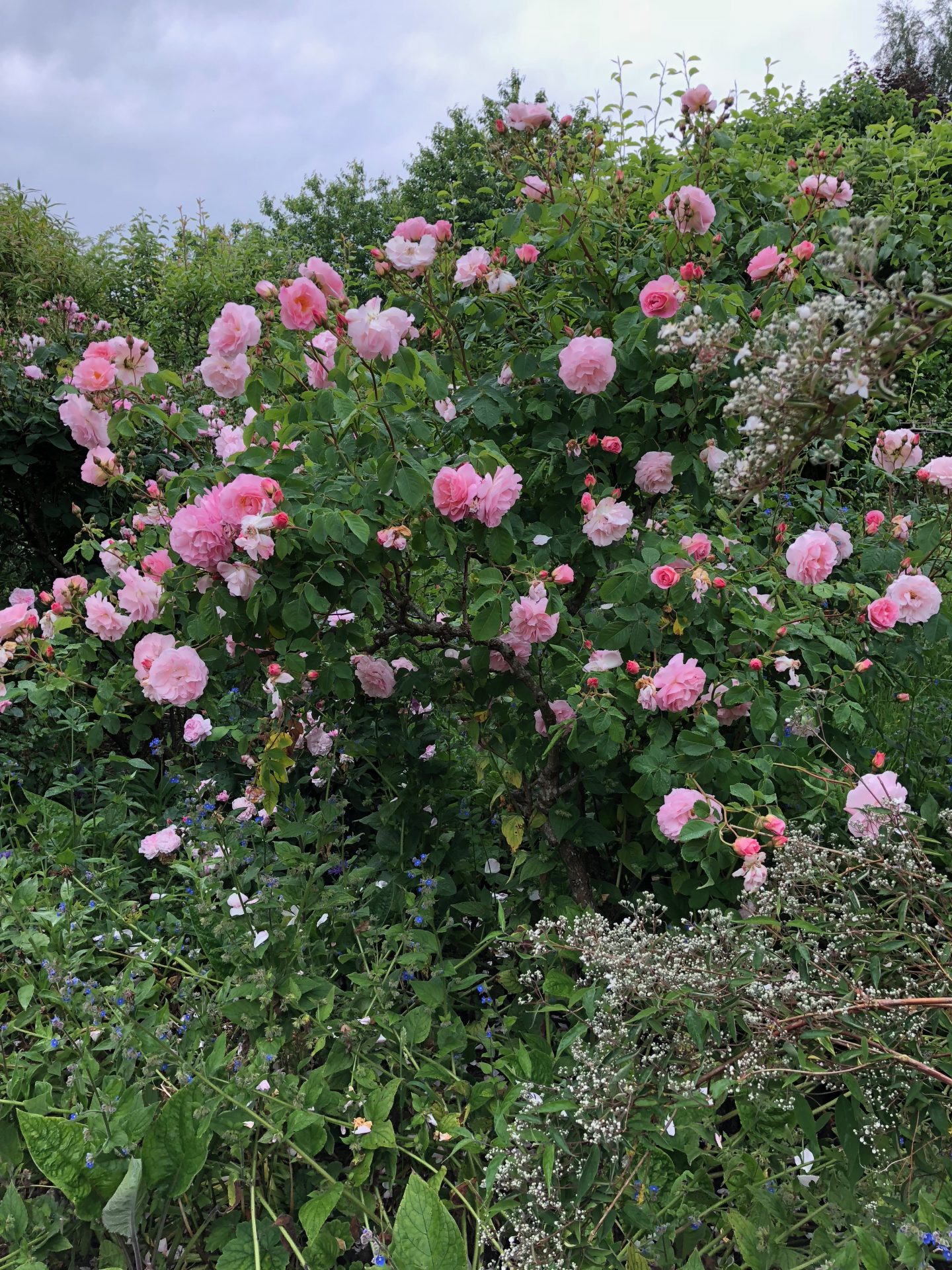 Next:  High Times on the Baltic Sea