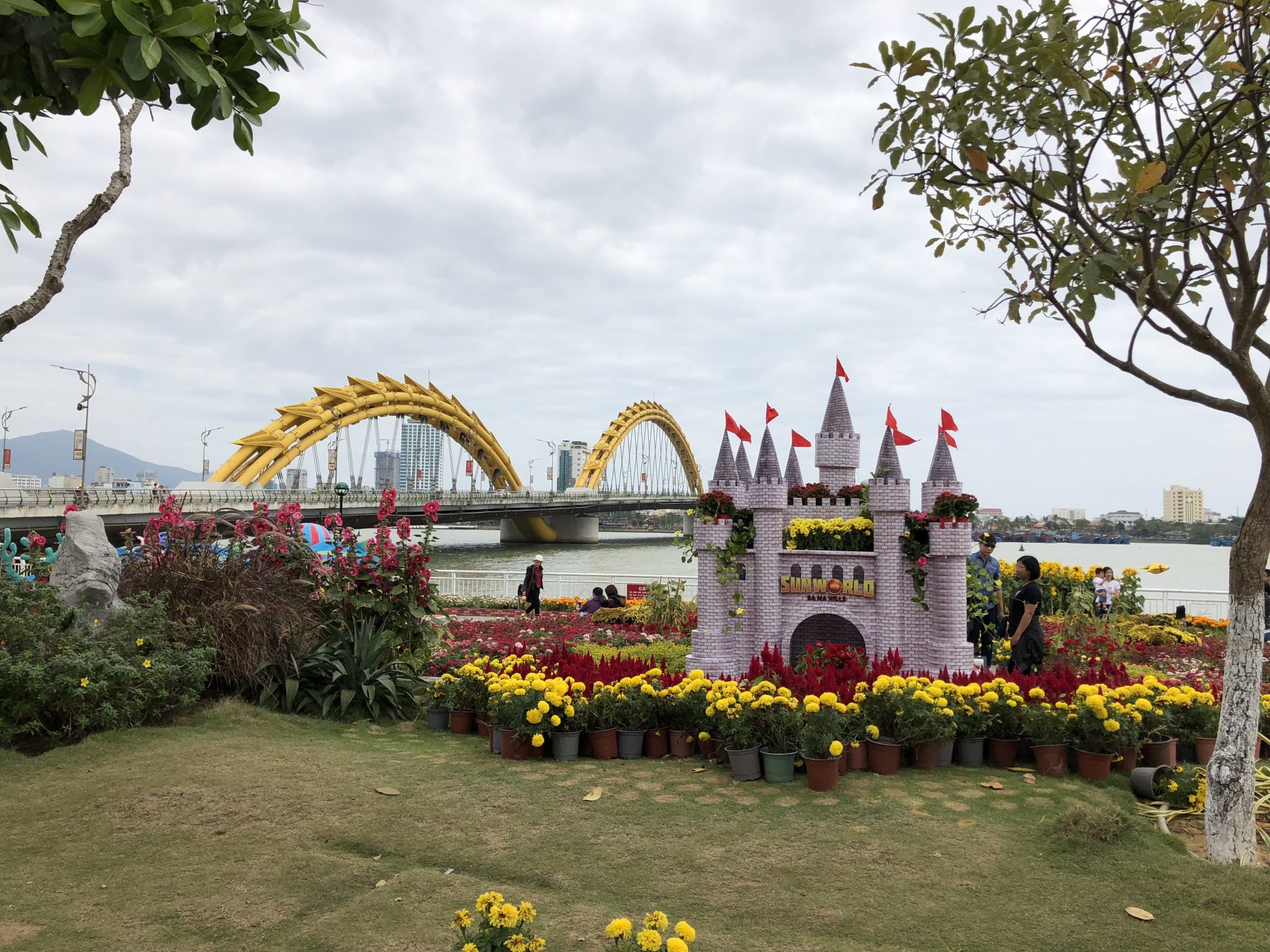 Did everyone have a nice Easter or Passover?  Good – because your break is over.  Back to Vietnam!

Chinese New Year was still going full blast when we pulled into Da Nang on an overcast Sunday.  Call me stupid (or, my preference:  uninformed), but I had no idea that the countries that celebrate the Lunar New Year decorate EVERYTHING  in the same ‘over the top way’ we typically decorate for Christmas.  Of course, it being the Year of the Dog, there were dogs everywhere.  Also, flowers, lanterns, banners, streamers, dragons and trees decorated with red envelopes (which signal good luck and are full of money – which makes sense.  If someone gives you an envelope full of money, it seems to me you’ve already experienced good luck.)  Da Nang’s riverfront was the center of the local celebration.

Da Nang was transitioning from a sleepy fishing village to a bustling metropolis until 1967, when American troops (and the Saigon government) built it up into a political, military and cultural center and its development boomed.  During the worst of the Vietnam war, Da Nang attracted thousands of refugees to nearby camps and the infrastructure crumbled.  A massive renovation, begun in 1986, has resulted in a productive, clean

and bustling city once again.  Remnants of the war can be seen in places like nearby China Beach, a well-known base for American troops to take R&R while on duty. (I wonder what it looked like 50 years ago?) 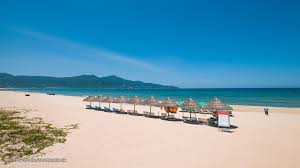 The Vietnamese are not pedestrians.  Some have cars but nearly everyone has a scooter.  City planners didn’t anticipate the parking problems created by this abundance of scooters – which now park exclusively on the sidewalks. This is partially because it’s advised not to let your scooter out of your sight while you shop, dine or transact business unless you’ve paid a sidewalk parking attendant to watch it for you.  (Interesting fact – Sidewalk parking attendants make up the single largest ‘service occupation’ in Vietnam.)  This created a problem for us scooter-less tourists.  Walking anywhere without being pushed into the street or having to hurdle scooters was difficult.  Combine this with death-defying street crossings and we were tempted not to move from a single spot once our taxi dropped us off. 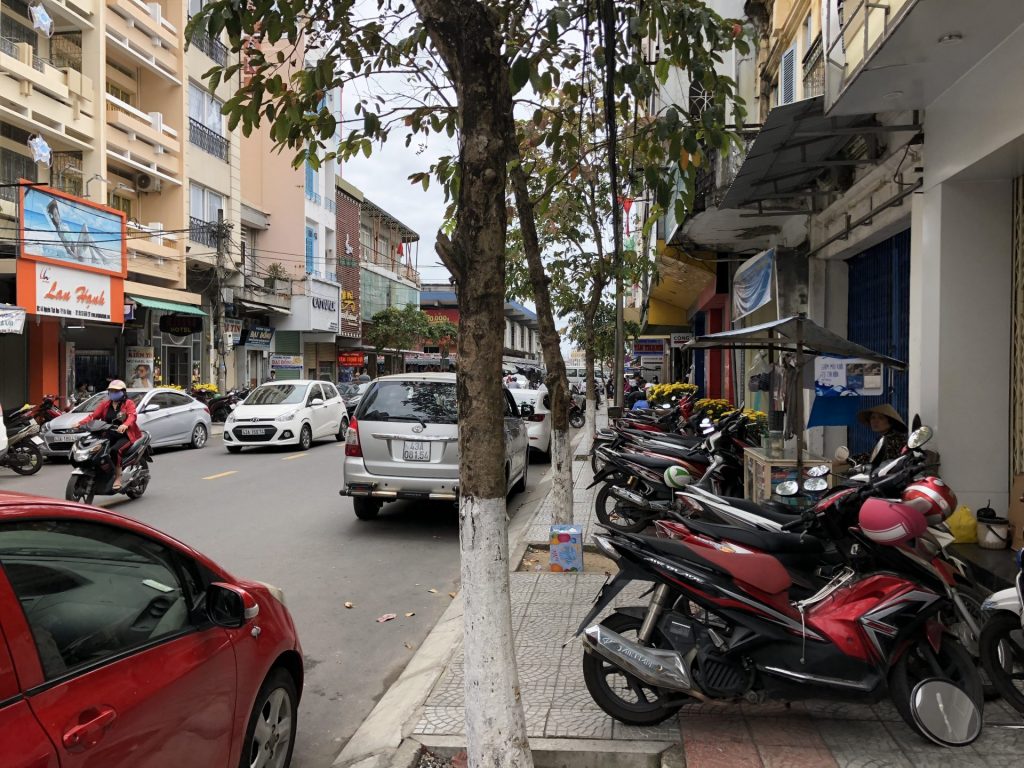 Away from the riverfront, we found some local curiosities:

The next day, after our ship was hit by a barge (shades of Titanic!   But.. barge, not burg.  No real damage, except psychological.), we anchored in Ha Long Bay in the Gulf of Tonkin.  According to the guidebooks, we should have been dazzled by this: 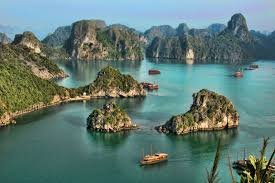 Instead, what we saw was this: 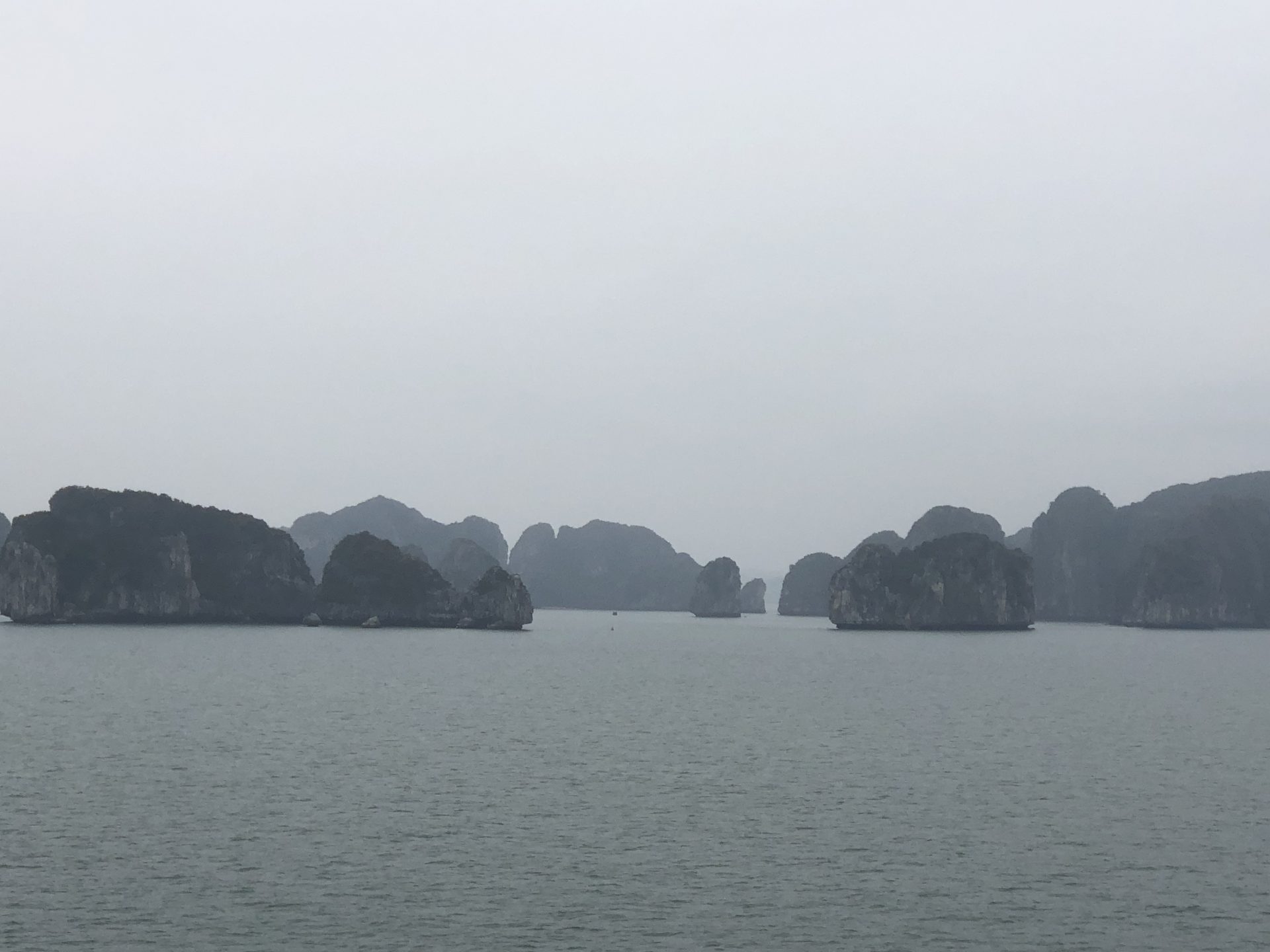 We found out later that the sun only shines about 30 days per year in this bay.  Undaunted, we boarded a ‘junk’ to explore some of the 1,969 limestone monoliths jutting out of the sea.  (989 are named.  I won’t list them here, except this one, inexplicably named “The Thumb”.) 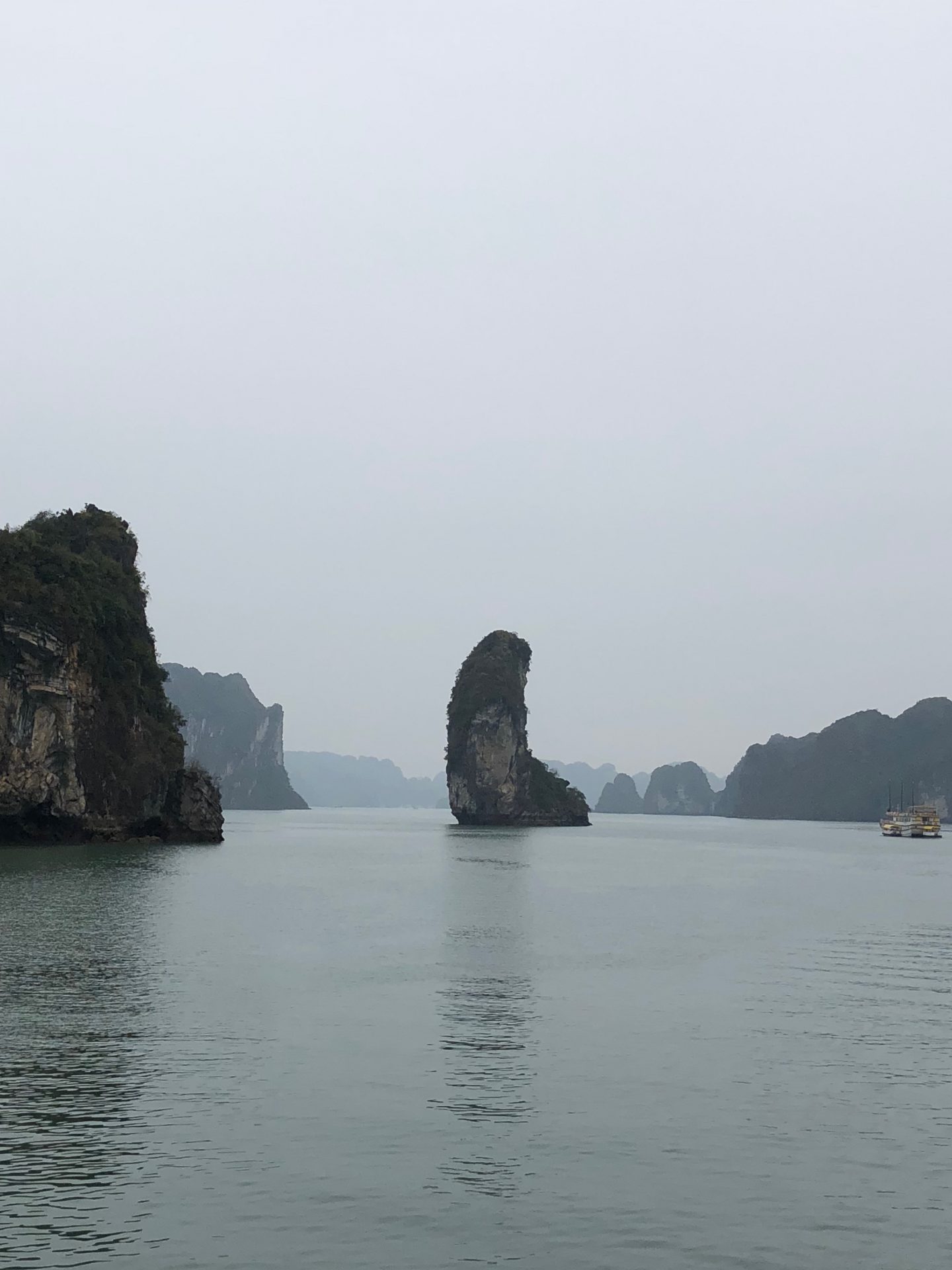 Some of the islets (as many of the monoliths are known) contain remarkable caves which have been made even more dramatic via paved walkways, stairways and lighting.  Each cave relates to an elaborate myth regarding dragons and the origins of the Vietnamese people. 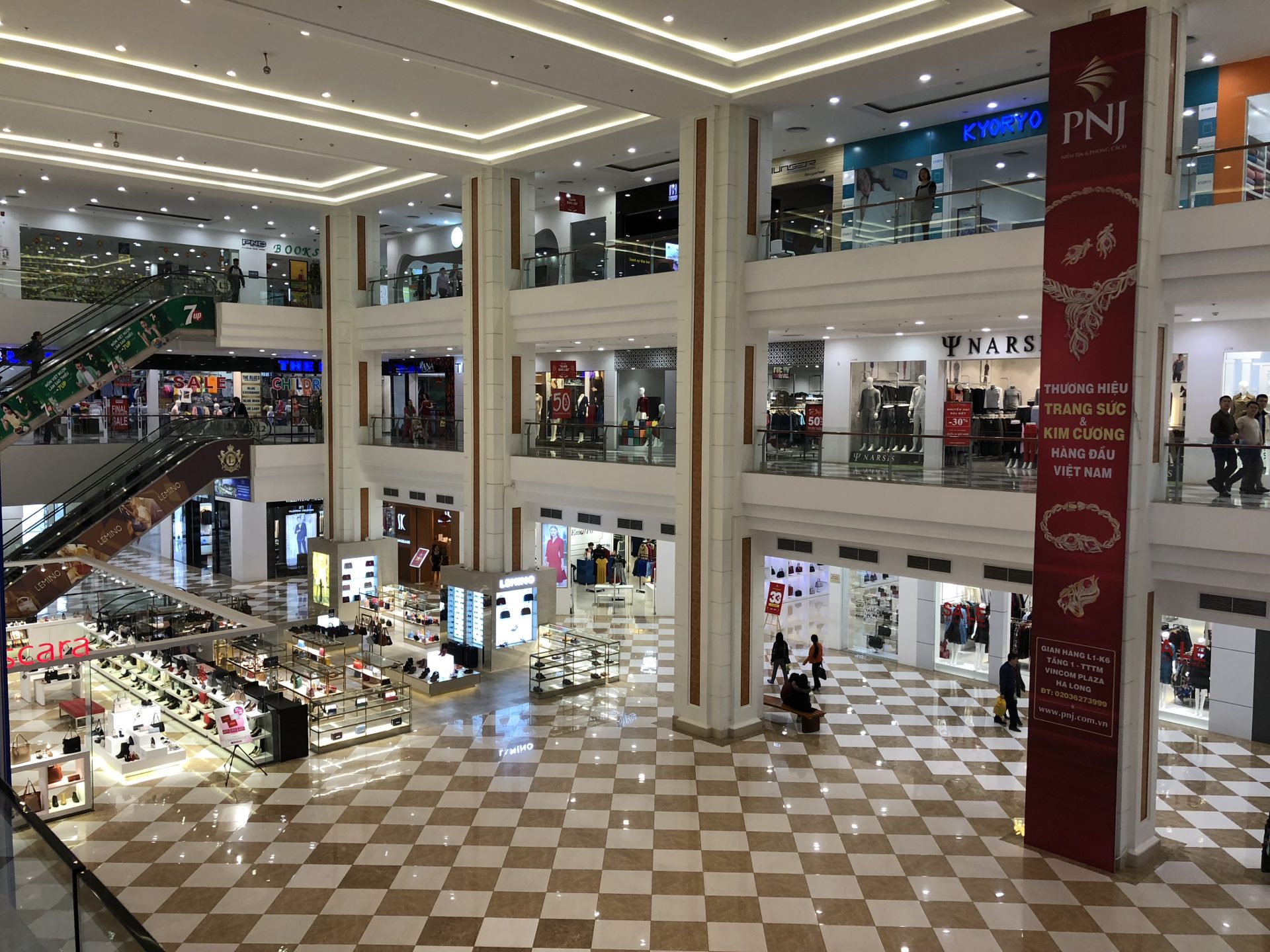 with a Wal-Mart-like store where security guards hermetically sealed your purse before they’d let you enter.

The bayfront was quite picturesque (if only there’d been sun!)

although we were puzzled by this strange apparition:

Like many other waterfront cities, Ha Long enjoyed a night-time laser and light show that would rival Times Square on NYE.    More about this phenomenon later.  Ha Long Bay was interesting, could be dazzling, but best of all – our  damaged ship didn’t sink!  We survived! 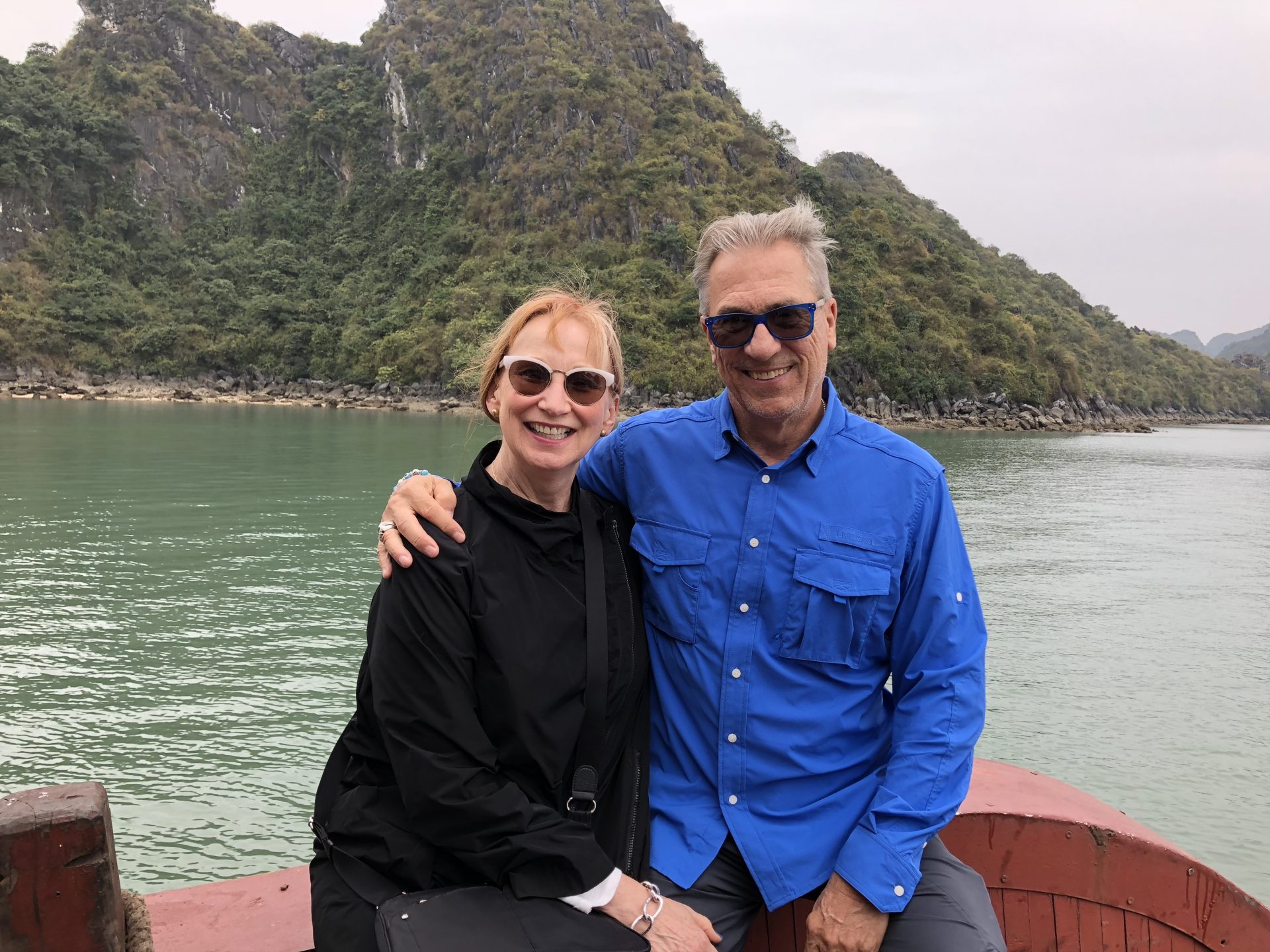