And now we return to the cruise…    After a quick afternoon in Copenhagen (been there once before, done that), we boarded a Ponant cruise ship and sailed overnight to Poland.

We’ve probably never mentioned that we’re Polish (yep, both of us.  100%.  And I’m pretty sure we’ve talked your ear off about it at some point).  We’ve been to Poland a few times, but never had the pleasure of visiting Gdansk, the beautiful northern port city where courageous Poles brought down communism in Poland in 1989.  This visit was far too short (one of the drawbacks of cruising…) but we know we’ll be going back.

This was the first stop on our Baltic cruise and the somber morning clouds matched our mood as we approached the monument to the 45 Polish shipyard workers who were shot by Russian snipers in 1970.  They were bravely protesting the communist regime in Poland and paid with their lives. 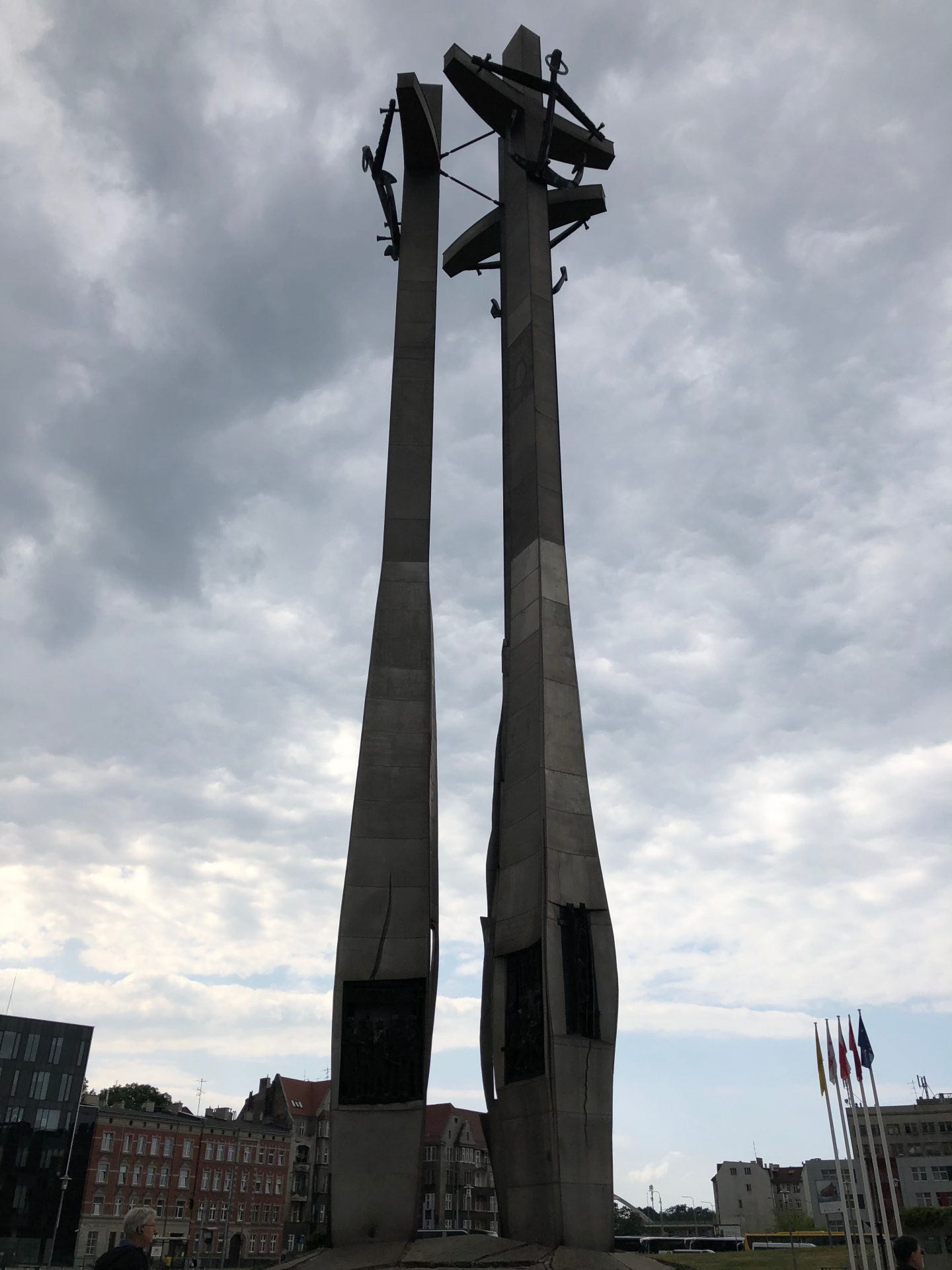 This travesty of Soviet oppression seeded the Solidarity movement which ultimately led to a free, democratic Poland and the election of Lech Walesa, the leader of Solidarity,  who was chosen to be Poland’s president. (That is a lot of turbulent history in a nutshell.)  Many of you probably remember news photos from the 1980’s that were shot at this location – the entry to the shipyards:

Next door is the European Solidarity Centre, which is a museum and library devoted to the history of Solidarity and other opposition movements of Communist Eastern Europe. It was a huge, enticing structure, opened in 2014, that we couldn’t explore due to time constraints.  Moving on… 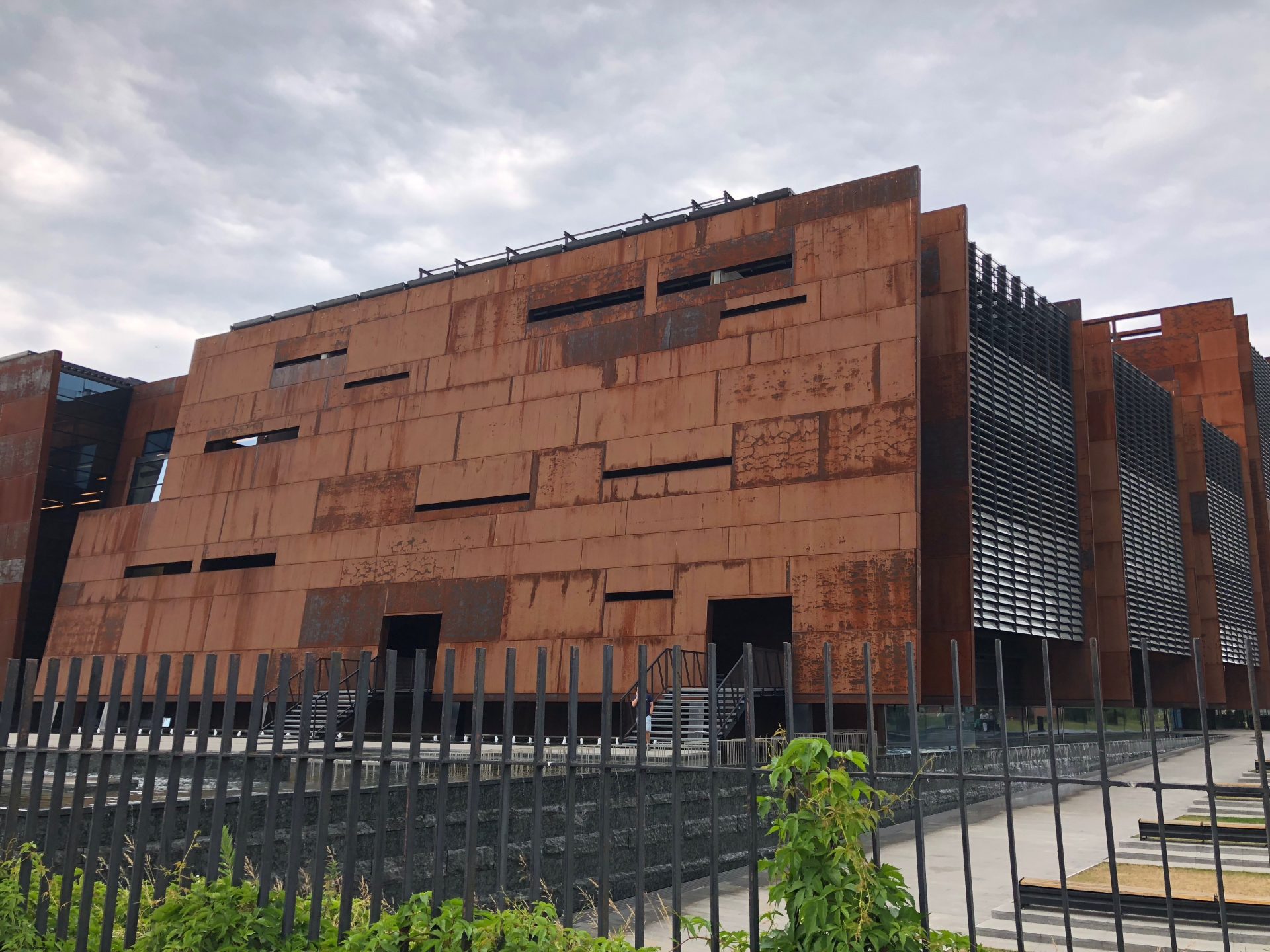 The sun made a guest appearance and we headed into the city center, which had been 90% destroyed during World War II.  After the war, the Gdansk citizenry decided to rebuild their center while erasing any and all references to its pre-war Germanic influences (or ‘Prussian barbarism’).  The gorgeous Flemish, Italian and French buildings you see (at the top and below) are not historically accurate but the result of a cultural cleansing of everything that was hated about their centuries-old Germanic past.  The opportunity to rewrite history was embraced and the results are stunning (keep in mind that most of these buildings were constructed between 1952 and the late 60’s):

Like many European port cities, Gdansk is bisected by canals; ‘old’ sections on one side of a canal vie with modern architecture and lots of new housing on the other.

Waterside shops selling amber abounded; restaurants serving authentic Polish food were a little harder to find, but we persisted. (This cafe was not on the water.  That’s how hard we had to persist!)

(The pierogi (dumplings) were not quite home cooking-caliber, but the bigos (sauerkraut and sausage) were delicious.  In true cruise fashion, this was just a snack between lunch and dinner.)

Since it was a Sunday afternoon, the canals were filled with recreational vehicles (and I stress the word “vehicle”):

Back on board, we were treated to an appearance by non other than President Lech Walesa, who spoke about the world today, his view of politics (dim) and his hopes for the future (optimistic).  I truly felt the presence of a hero of the 20th century.  Icing on the cake:  he was pretty darn funny!

Next:  a VERY short visit to tiny Estonia.