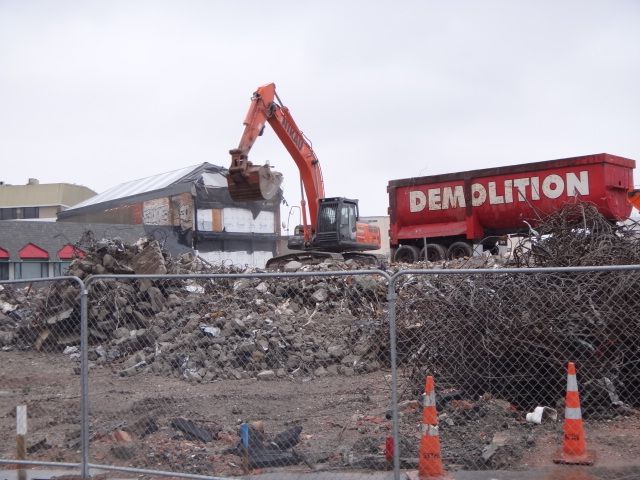 On a sunny morning in February, 2011, the lovely town of Christchurch was hit by a magnitude 6.3 earthquake, a mere 5 months after a magnitude 7.1 earthquake jolted the area.  The 2010 quake caused no fatalities, but weakened many building structures, so that when the second quake hit on that lovely summer morning, 185 people would die as buildings collapsed and the ground slid away to be filled with silt and water.

We arrived on a rainy Friday afternoon, two years after the quake of 2011, and quickly located our lovely little hotel (The George) on the banks of the Avon River and across from a vast and vibrantly green, leafy park.  The staff provided afternoon tea and, in the evening, we found a small teddy bear on our pillow with a tag around his neck that read:

‘life has been good here, but I’m ready to roam, so please pack me up and take me home’.

In a few moments, we’d learn why the bear (and many others) were more than ready to roam.

We set off with a walking map, knowing we were just blocks from downtown.  We were hoping to experience some of Christchurch’s weekend night life – kiwis are lively, fun-loving people and we were hoping to get caught up in some local revelry.  The streets were strangely empty.  What’s more, downtown seemed dimly lit.  It was then that we noticed the ‘red zone’ on the map – and quickly realized we were at the heart of the 2011 devastation.  There were blocks and blocks of earth scraped bare and where an edifice still stood, it was anchored by shipping containers, sometimes piled 6 high, to keep it from toppling and causing destruction to whatever still stood nearby.  Tarps the size of football fields covered gaping chasms on the sides of the taller buildings and steam shovels were everywhere – stilled for the night, their work undone.  I’ll let the photos do the rest of the talking.