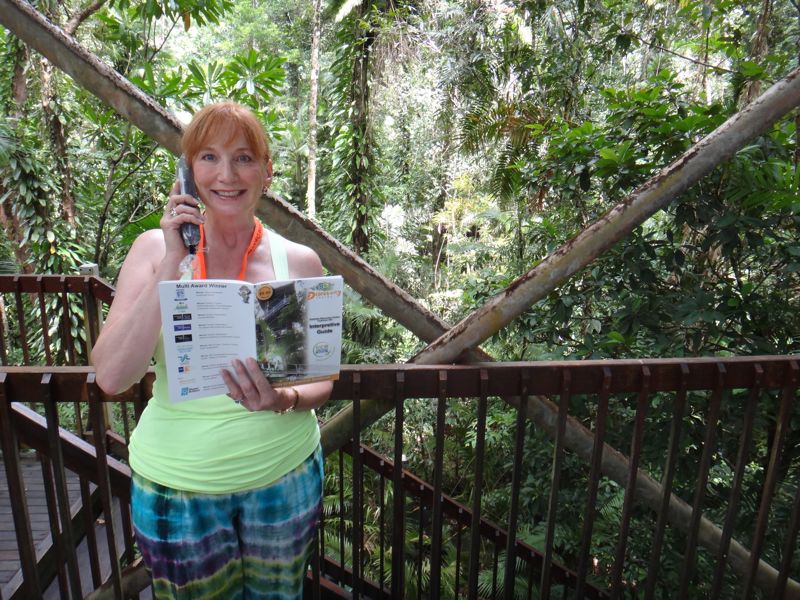 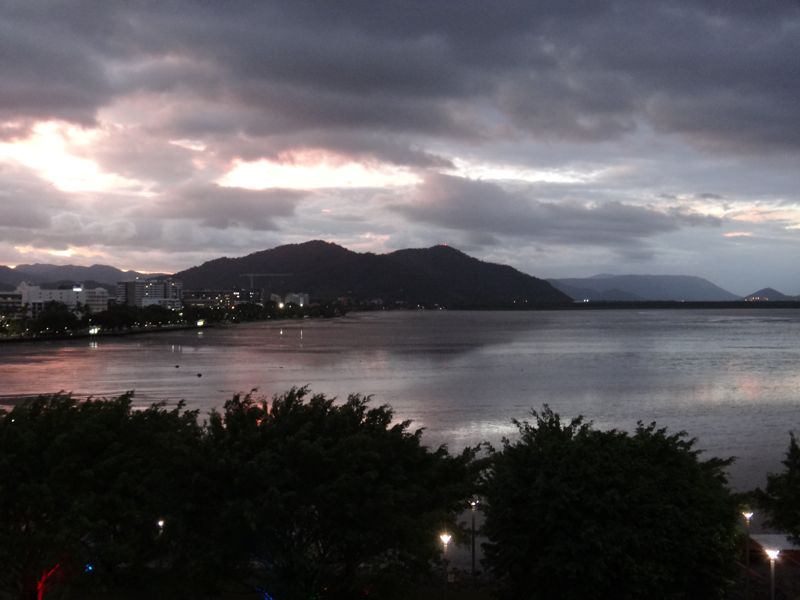 If South Beach and Tijuana hooked up and had a little city, it would be Cairns.  It’s tropical, it’s wet and it’s got a hefty portion of tacky. A primary hub for boat trips out to the Great Barrier Reef, this holiday destination is filled to the brim with backpacking Aussie and European kids, all looking for seasonal work. The streets are also teeming with Asian tourists.  The city helpfully provides these signs in all the bathrooms to help with the cultural differences: 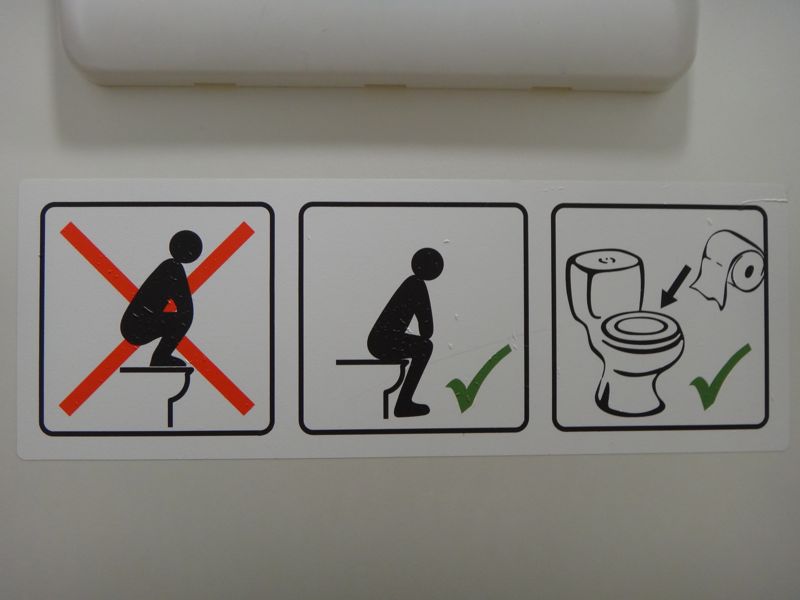 Once we’d caught our breath and regained our land-legs, we headed north on Captain Cook Highway to Daintree National Park – the tropical rainforest that makes up much of the northern Queensland peninsula.  First stop:  Bruce Belcher’s Crocodile Adventure Tours led by Bruce himself.  Bruce was as earnest as they come and he tried his best to show us as many crocodiles as he could.  Please look carefully at this photo: 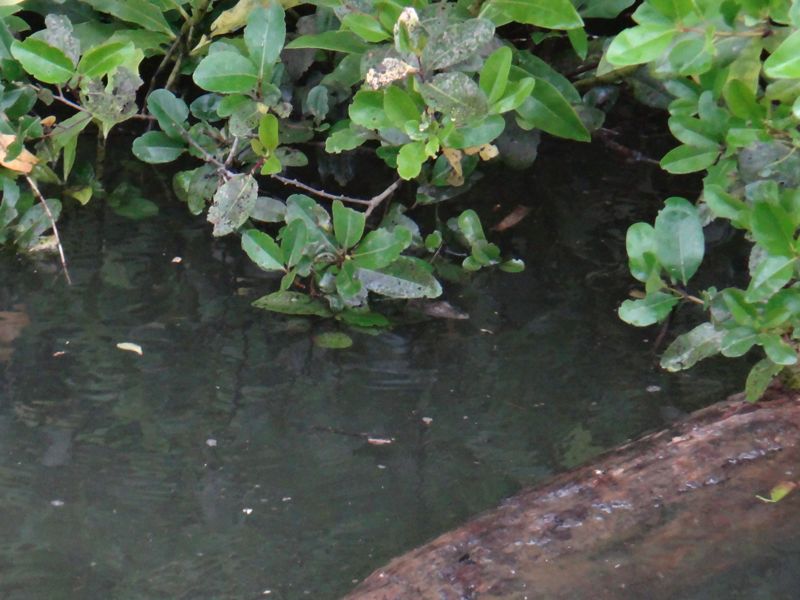 there’s a tiny crocodile hiding under the leaf in the middle of the shot. Ooooh, scary!  (Bruce’s dog was much more interesting than the 3 crocs we saw; he’d stand precariously perched at the front of the boat.  A sudden stop and Ginger was croc bait.) 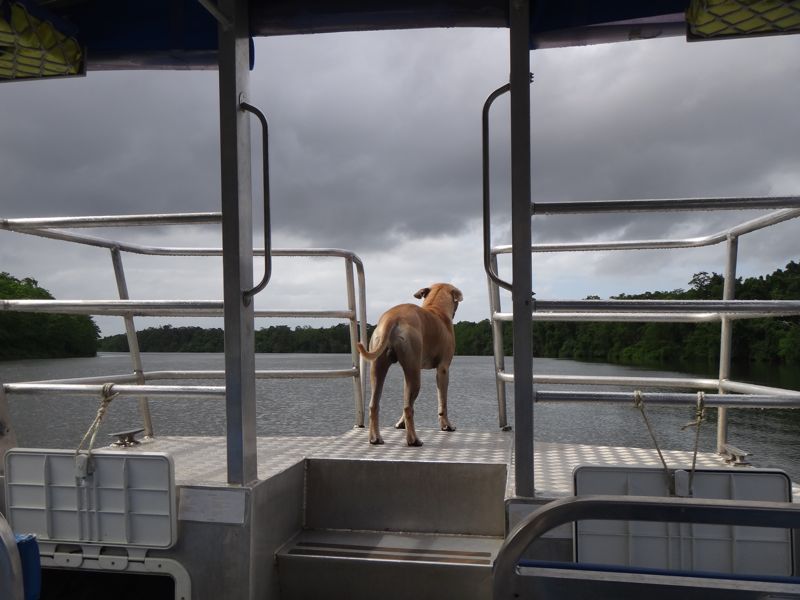 Somewhat underwhelmed by the crocs we saw (or didn’t see, as the case may be), Roger feigned fear of a man-eating croc on the walkway back to the parking lot, just for the photo op. 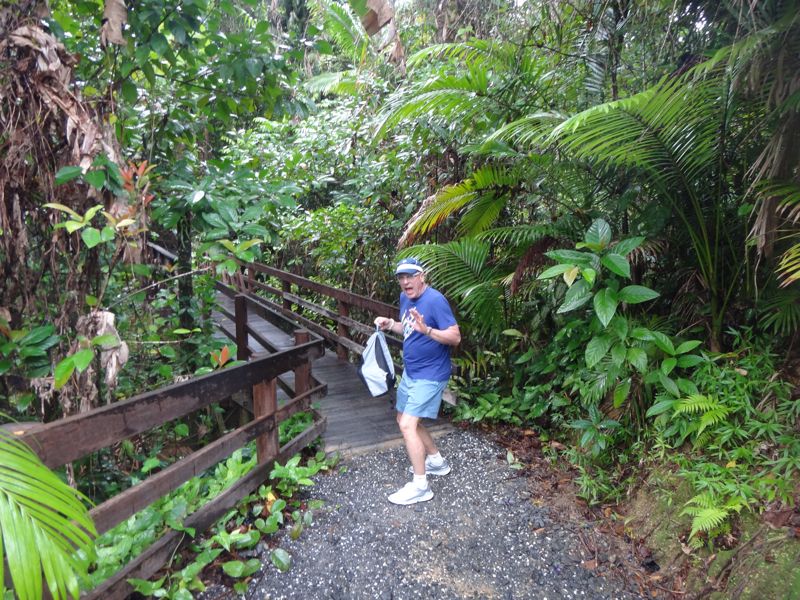 Next:  Cape Tribulation, where Captain Cook’s ship, Endeavour, foundered on a reef in 1770, and where he claimed “all of our tribulations began”.  The cape itself is an extraordinary stretch of desolately beautiful beach. 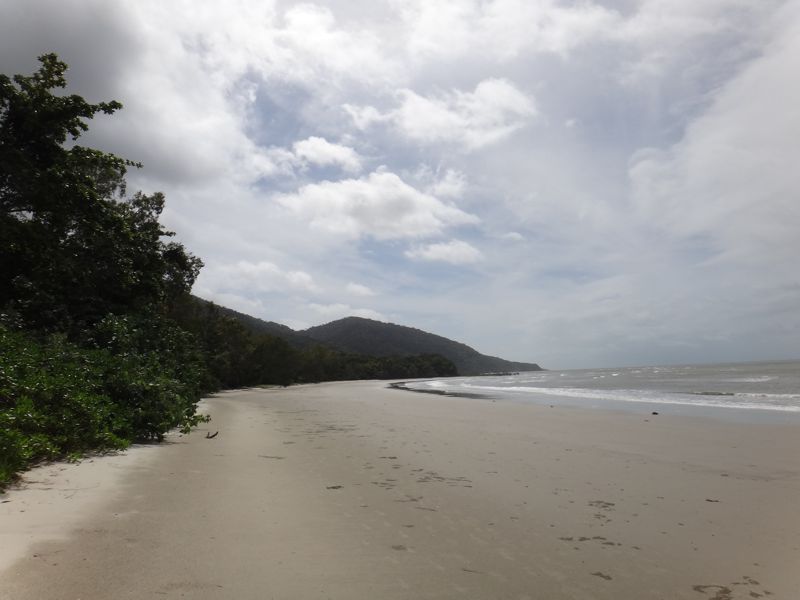 A person could certainly find solitude, if not enlightenment, on this beach.  However, we were completely distracted by what we found at our feet:  designs made entirely out of ‘sand balls’.  When we looked closer, we realized that there was a tiny hole (or two or ten) amongst the balls, and at one point, I saw a tiny ‘hand’ push an even tinier sand ball up out of the hole and onto the beach.  We were enchanted and disturbed – what madness was this??  It turns out that tiny sand bubbler crabs eat and excrete organic matter and then burrow in the sand, munching all the way.  Check out this video:

At the Daintree  Discovery Center, we climbed a tower which took us above the tree canopy while we warily watched for pythons and tree snakes, hourglass spiders and the elusive cassowary – an enormous flightless bird known for its cranky nature and it’s ability to eviscerate humans with its slashing talons. And we wonder why most crazy nature shows originate in Australia…

The last bit of excitement for the day was finding the legendary Rainbow Warrior in Cairns harbor.  It’s the third iteration of the Warrior ships for Greenpeace and it was built in Gdansk, Poland and fitted out in Germany.  It’s on a year-long mission in Australia to bring attention to how the reef is being destroyed by climate change and coastal development.   We did our part by leaving town the next day. 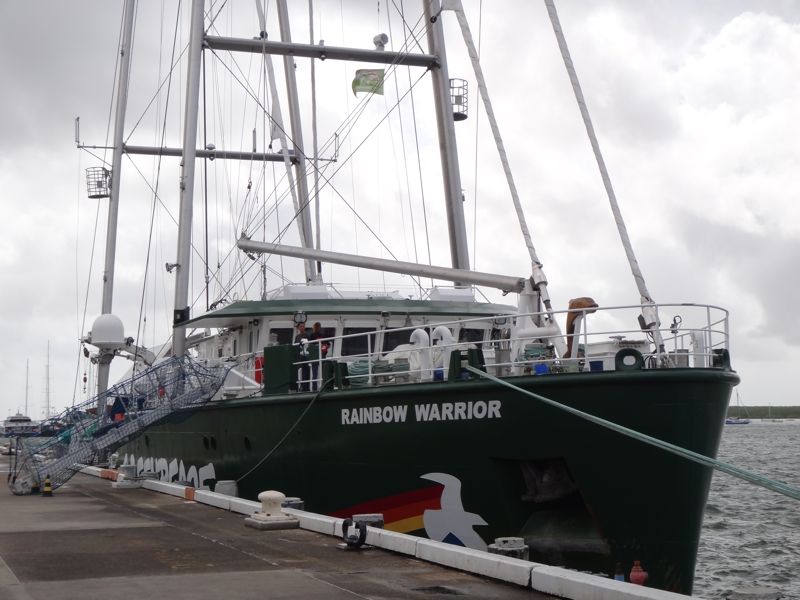