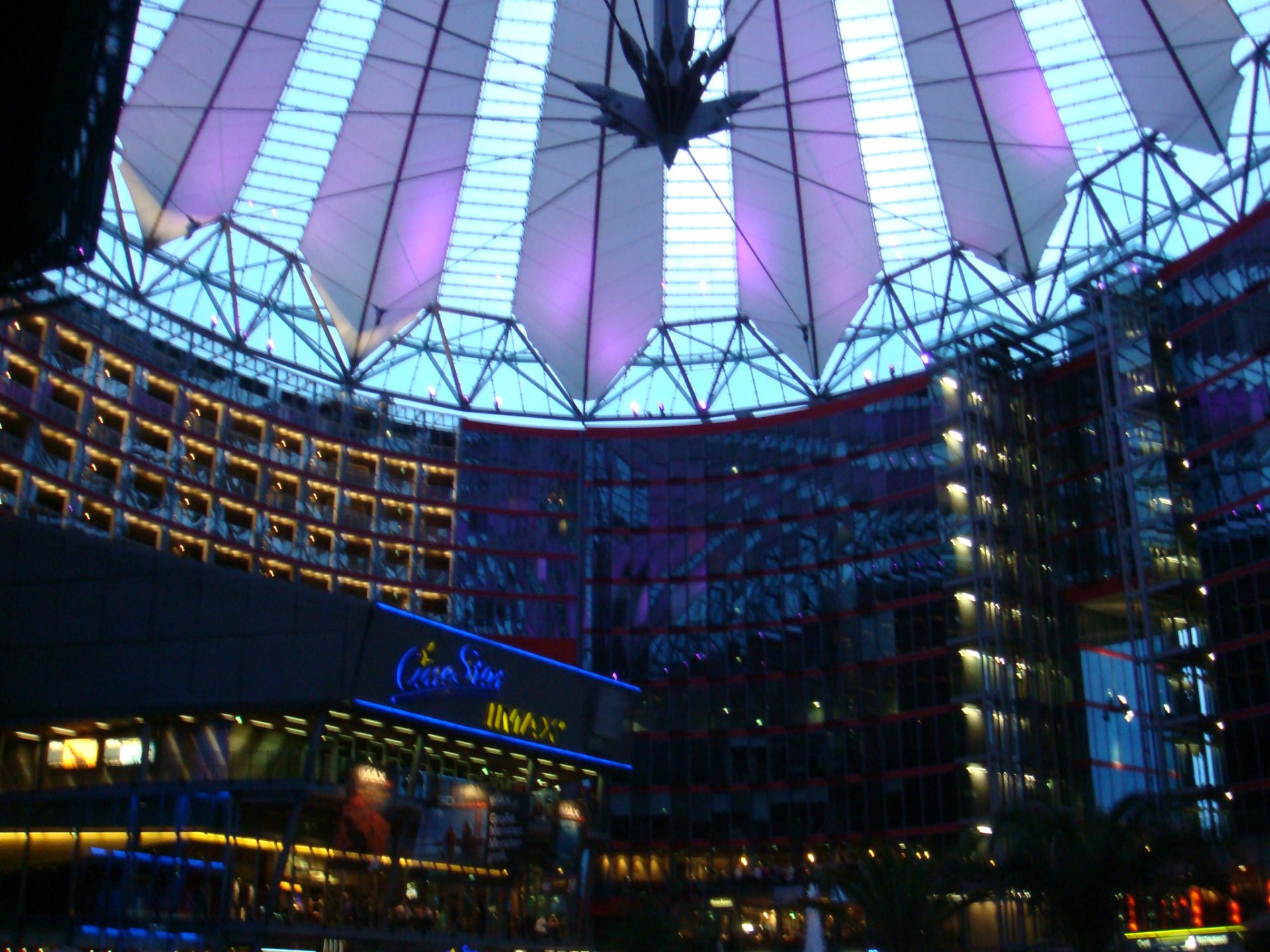 It’s Saturday night in Berlin and we just saw Star Trek!  Admittedly, I’m an armchair trekkie, but even Roger thought it was an excellent film.

Aside from the film’s general ‘wonderfulness’, we ONLY want to see movies in German theaters from now on!  Since we were seeing the original English version (instead of the dubbed German), it was showing in one of the ‘smaller’ theaters.  Yes, it only seated about 2000 people.  And, like the theater, the seats were HUGE and cushy and they had ‘sofa’ type seats where you could sit together without benefit of an armrest and get so cozy!!  To top it off, all seats are reserved so you can buy your tickets in advance for even the hottest movie and then stroll in right at show time without worrying if you’ll need a neck brace afterward.  After the previews, a girl came around and sold ice cream while some moviegoers ducked out to the concession stand and returned with bottles of beer.  Speaking of the concession stand, we decided we’d have some popcorn instead of dinner – so we were looking at the options (you know – usual stuff – a small popcorn and a drink combo for one price, a bigger popcorn and a drink for a slightly increased price and then the biggie, etc.)  We ordered the middle size to share and, seriously,  they brought us a tub of popcorn that was as big as a household cleaning bucket.  Seriously. You could have bathed a baby in it.  So, then we were rightfully scared about the size of the diet cola.  I’m not exaggerating when I say it was so big you could barely hold it in two hands!!!  It was like a slippery melon. It had to be more than a half gallon. We didn’t know whether to laugh and act like we KNEW we’d look like gluttons or to sheepishly duck into the theater and hope no one noticed (we were the only ones who ordered the ‘medium’ sized that we could see).  (But, of course, we finished the popcorn.  You have a choice – salty or sweet and we love the sweet popcorn they serve in European theaters.  It’s like our kettle corn, just not as greasy).  Next time, we’re going to bring a wheelbarrow and order the large.  Unbelievably (to me, at least), my husband just had to have a pretzel too.  So… he put it around his neck (I’m not kidding) because we couldn’t carry everything to our seats using only our hands.

Actually the escapism offered by Star Trek was a light-hearted end to an emotional day.  First thing in the morning, we walked to Checkpoint Charlie

and the long section of the Berlin Wall that is still standing.  Berliners have done an exemplary job of explaining the wall (if it can be explained) with photos and text that commemorate the dead (no one knows how many people died trying to escape, but it’s suggested it was above 250;  East German soldiers were decorated every time they killed a ‘runner’).  I cried at the wall – was no other way to respond to it.  We Americans take our freedom for granted and this memorial made me realize how vigilant we must be.

Our timing was good and we happily found ourselves here on the weekend of Berlin’s celebration of 60 years of democracy (West Berlin) and 20 years of unification – there were street fairs, lively bands and politicians (from all over the world) engaging in public debate and discussion – the last being something I don’t recall seeing in America at our festivals.  The center for the festival was the Brandenburg Gate – that iconic symbol of Berlin – (Napolean AND Hitler marched through this gate.  Not together, obviously. Although that would have been an interesting smack-down).  As an American, I was proud to see the American Embassy, huge congratulatory banners flowing down the walls of the building, right next to the gate.  What a position of honor for us!   Hearts swelling, we gladly joined in the celebration of freedom!

In the midst of all this merriment, we unwittingly stumbled on the site  of Hitler’s underground bunker (it’s believed to be the site; understandably, Berlin doesn’t want to memorialize the place of his suicide) – his final ‘home’.  There is a signboard with a diagram of the bunker’s layout and a suggestion that it was near where we were standing.  Also near to where we were standing was the memorial to Berlin’s Jews;

the irony of these two sites being so close to each other is fitting. There were 160,000 Jews in Berlin when Hitler took power; at the end of WWII they were completely gone.  (This number seems small compared to the 6 million who perished throughout Europe – the memorial honors all of the lost.)   This city rockets your emotions – the tragedy of its history and the atrocities it fed throughout the rest of the world feel so immediate. We had to force ourselves to rejoin the 21st century and continue to learn and reflect.

When you see photos of the Berlin devastation of WWII and compare it to how the city looks today, it’s nearly impossible to comprehend how much change has happened and how much has been lost.

Over 80% of the city suffered damage and much of it was irreversible!  (And did you know that it was the German women who cleaned the place up so the rebuilding could begin??  Along the Berlin wall memorial were detailed pictures of groups of women passing rubble down a human conveyor line – although the claim was that this work wasn’t voluntarily done, I’ll bet those women were more than happy to get in that mess and start cleaning it up!  I know the feeling.)  Some buildings have been rebuilt to exactly resemble their fallen originals and some have been adapted – you’ll see centuries-old architecture on the first two floors and then a modern, but very well blended, addition on the top two or three floors.  The historic buildings that more or less survived intact stop you in your tracks:  the Reichstag (where there are still bullet holes),

the Berlin Cathedral, St. Hedwig’s Church, a number of museums.  If those buildings define what the city must have looked like before the 1940s, you mourn anew.  The new buildings (all done by architect superstars) give Chicago some serious competition as the city that defines great, late 20th and early 21st century architecture.

Germany’s acknowledgement of it’s checkered past can be found everywhere – The 150 kilometer path of the wall (150!!!!) is marked by brass bricks in the road; the place at the University where the books were burned has a particularly moving memorial of empty bookshelves in a bare room set into the earth that you view from above; crosses with the names of East Germans who died trying to escape to freedom in the west can be found every place there was a checkpoint.

I was shocked to realize that the wall ran just FEET from the Reichstag and the Brandenburg Gate;  what a slap in the face this must have felt like to all Berlin.  You can walk and think and learn.  Thankfully, there are permanent markers placed throughout the city written in German and English that help explain what you’re looking at and WHY you’re looking at it.  The depth of analysis and understanding these signboards exhibited was cause for hope for all freedom loving peoples.

Here’s another reason I like Berlin (and those who know me will understand this immediately!) – everyone walks on the right!!!  And if the crosswalk sign says “Don’t Walk”, no one moves!!  In fact, today, we were waiting to cross a street near the Brandenburg and there were tons of police and military around guarding the politicos and Rog started to cross when the traffic cleared.  The nearest policeman stuck his RIFLE out to stop him and said “Nein!” – as in “What’s the matter, dumbpkof – can’t you read???”  An unsettling moment for my hubby, to be sure!  (Okay, that’s not what I liked – but the walking on the right was most refreshing!!  As long as you stayed on your side of the sidewalk, you could proceed unimpeded!  You’ve got to love the Germans for that!!) (PS – we found out today why there were SO many police around – the German parliament was electing their President on Saturday at the Reichstag – exactly where this happened!)

(Don’t forget – when I’m finally elected Queen, we’ll ALL be walking on the right – and woe to you if your shoes are out of alignment!!)(But, I plan to be a benevolent queen and will be providing a weekly pail of pierogi to all of my subjects.)

I thought I would include a few random photos – I’m still aghast that I’ve reached this age unaware of the beauty of Berlin past and present.