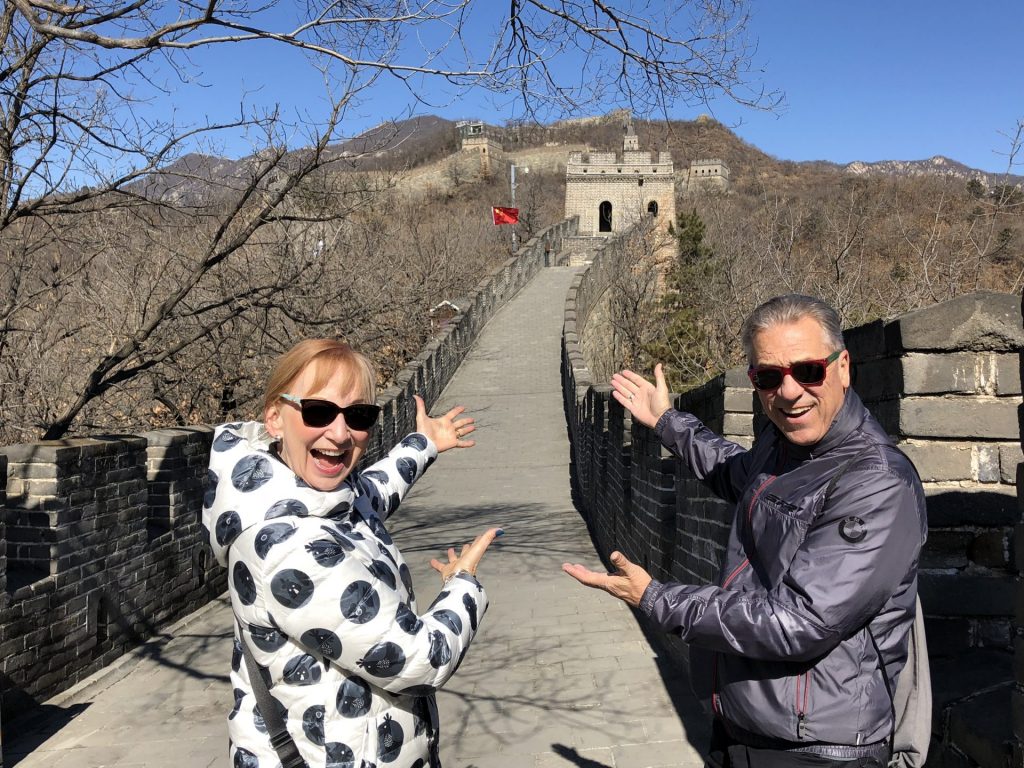 It feels like I’ve started nearly every post on this trip with the phrase”nothing prepares you for…” so, here I go again:  Nothing prepares you for Beijing.  Beijing is BIG.  Big buildings, big roads, big public plazas, everything is big, big, big.  Great Wall:  big.  Tian’enman Square:  huge.  Forbidden City:  ridiculously large.  Olympic Village:  I can’t even begin to describe. We feel like two little Americans in the juggernaut that is Beijing (and China).

After enjoying the pre-flight glass of boiling water (Seriously.  No tea bag.  Just hot water.) offered by China East Airlines on our flight to Beijing and being repeatedly reassured by our flight attendants that “we are climbing now and experiencing some turbulence.  Please don’t worry.” (strange that we climbed for over 2 hours) we were lulled into feeling as safe as one can while traveling.  But, on our trip to the terminal after landing, we thought wistfully of the many airport restrictions in place in the US.  On board the bus (Beijing airport is bigger than big, but there still aren’t enough jetways for all the flights) to the terminal, we had to cross an active runwy.   Our driver, after pausing to assess the distance between us and the jet that was barrelling towards us on take-off, decided to ‘gun it’ and see if he could beat the onrushing plane.  I was on the ‘jet’ side of the bus.  His gamble paid off.  I resumed breathing about 10 minutes later.

We arrived in the evening and checked into a hotel in the Financial District, where an enormous Morgan Stanley sign blared at us all night long.  Chase Bank was right next door along with a slew of other banks and brokerage houses.  Big buildings, all.  We were expecting at least a bit of culture shock, but this felt similar to staying in NYC.  It was all so very Western.  The adventure would start tomorrow.

Naturally, the first thing to do when in Beijing is to visit the Great Wall.  Naturally, all of our preconceived notions went right out the window.  First, here’s how we got to the Wall: 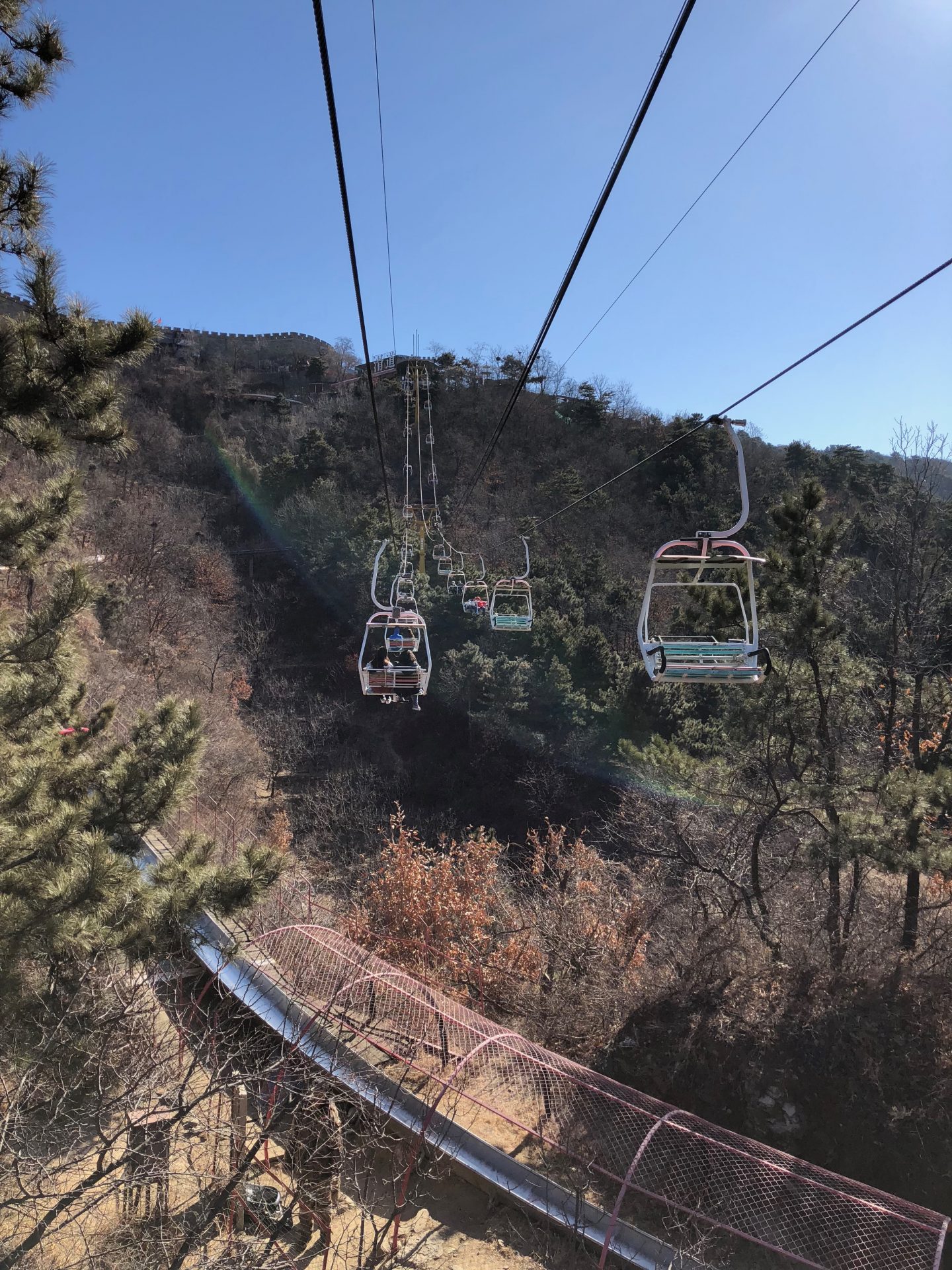 Second:  the Wall is not only high, it’s STEEP: 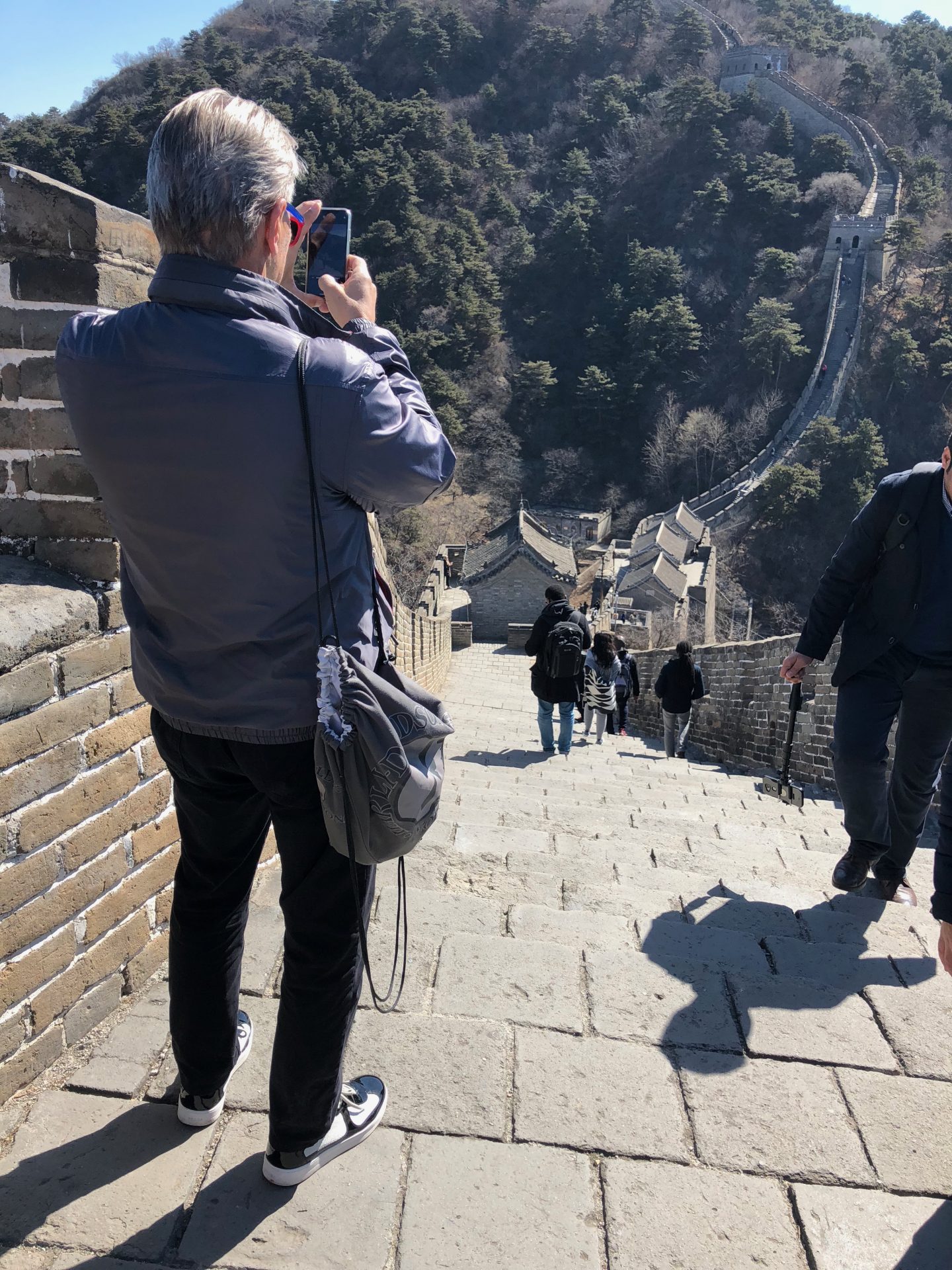 Third: this is how we got ‘down’ from the Wall:

The Wall looked deceptively new for something that was built in 221BC.  The ‘story line’ is that it was rebuilt in 1368 after hordes of Mongols attacked and then maintained until the fall of the Ming Dynasty in 1644. And never touched again afterward.  Considering that some of it was originally held together with glutinous rice flour, this is one enduring monument.  It’s also a mausoleum:  workers who died while building the Wall (estimates are 400,000 or more) were buried within it.  (After a bit of searching, I did learn that parts of the wall are maintained for the attacking hordes of tourists – sometimes 70,000 people per day.)   Officially, the wall is 13,170 miles long and spans 9 Chinese provinces.  1/3 of it has disappeared without a trace.  The section we walked was nicely maintained, especially if you like steps that are 18″  high and at a 45 degree incline. 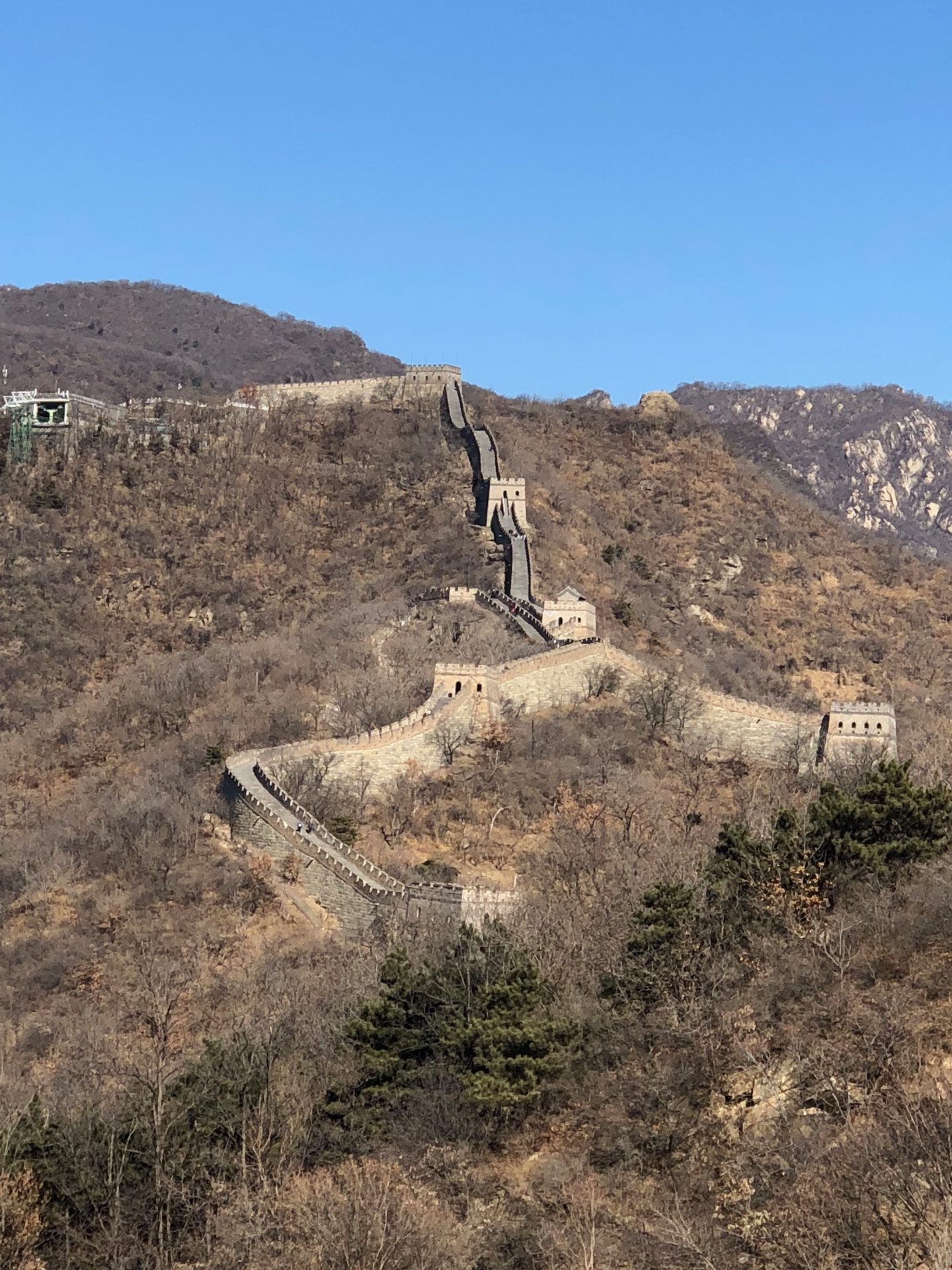 Next we went to China’s most visited site: The Forbidden City – 7,800,000 square feet of windswept space and 980 buildings containing a total of 9,999 rooms.   It’s twice as big as the Vatican and three times as big as the Kremlin;  24 Chinese emperors lived and ruled there from 1420 til 1912, when the last emperor abdicated and the new Republic of China was formed.  We tried to see all of it in 3 hours before we froze and it closed.

Returning to my ‘big’ theme – the first thing that struck us were the vast spaces; the second is ‘where are the 980 buildings?’.  I’m not sure what constitutes a ‘building’ in the Forbidden City, but we counted 5 gigantic ones.  Maybe there are 975 smaller ones scattered about, but I can’t verify that.  The 5 palaces are closed to the public; dimly lit interiors were visible only through a few roped off doors.

In the cavernous interior of each palace was a single piece of furniture.  Chairs (thrones, really) in four and a bed in the last one.  The emperors were carried around on litters by slaves so they’d not waste their entire day just going from chair to chair to bed (although I’m sure they did more.  Susan, our guide, plied us with lots of history, but our ears were mostly frozen and we could barely hear her above the wind.  Consequently, you are spared a recounting of 500 years of Chinese history.  You can thank me later.).  Here are some not-identical photos of The FC:

The Forbidden City is directly across the ‘street’ from Tian’anmen Square.  (The ‘street’ was designed to accommodate armored tanks and other shows of military strength.   It’s very, very, very wide.) Because the annual meeting of the People’s Congress was taking place during our visit, the Square was closed to visitors.  It was exciting (and disturbing?) to think that President Xi was just a few hundred meters away, making himself President for Life.  (The pictures look hazy due to smog (I shot them from right across the street) – which, according to our guide, was not too bad that day. One way Beijing is trying to improve its smog problem is by limiting the number and type of vehicles that can drive in the city.  A gas or diesel automobile license plate costs anywhere from $20,000 to $30,000 (over and above the tariff already paid for a foreign car) and if you weren’t born in Beijing, you can’t drive in the city center AT ALL.  Electric cars are not charged any tariffs and qualify for inexpensive license plates.  We saw tons of Teslas in Beijing’s heavy traffic.  We also saw some Chinese-made cars named “Trumpchin” -which, we were assured, were in China long before our last election.)

This was the best photo of Tian’anmen square I could get.  The Great Hall is peeking in at the right edge. 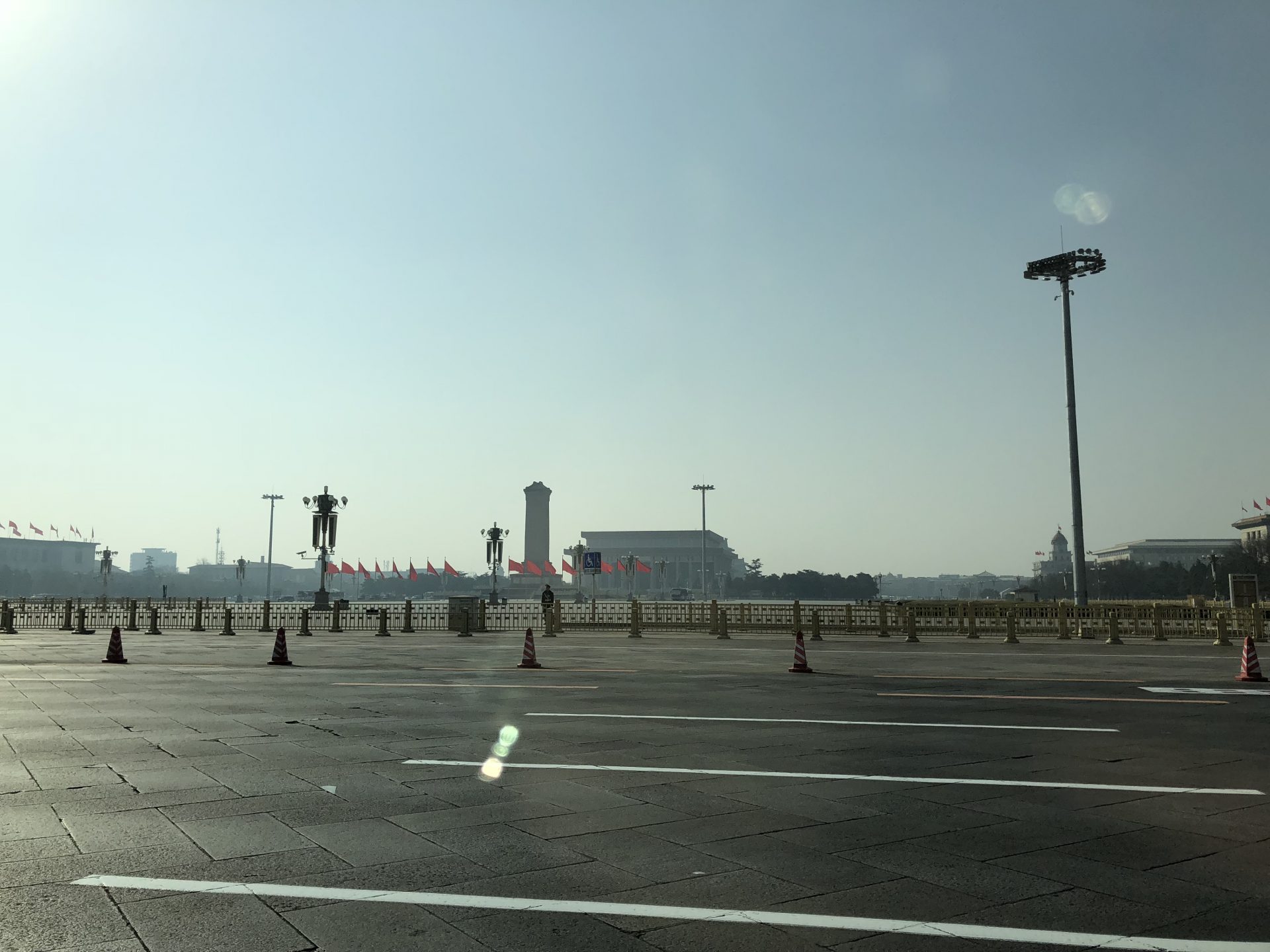 Early the next morning, we set out for the Summer Palace, which is only 12.5 miles from The Forbidden City, but light years away climactically, I’m assuming.  The Palace is primarily famous as the home of the Dragon Lady, the imperial concubine and subsequent dowager empress, Cixi, who kept a figurehead nephew imprisoned there for 20 years while she ruled from ‘behind the curtains’ after her son died.  Ultimately, an adopted son, Puyi, became the last emperor of China.  (The movie about his life, “The Last Emperor” was primarily shot here and in The Forbidden City, which was a first.) 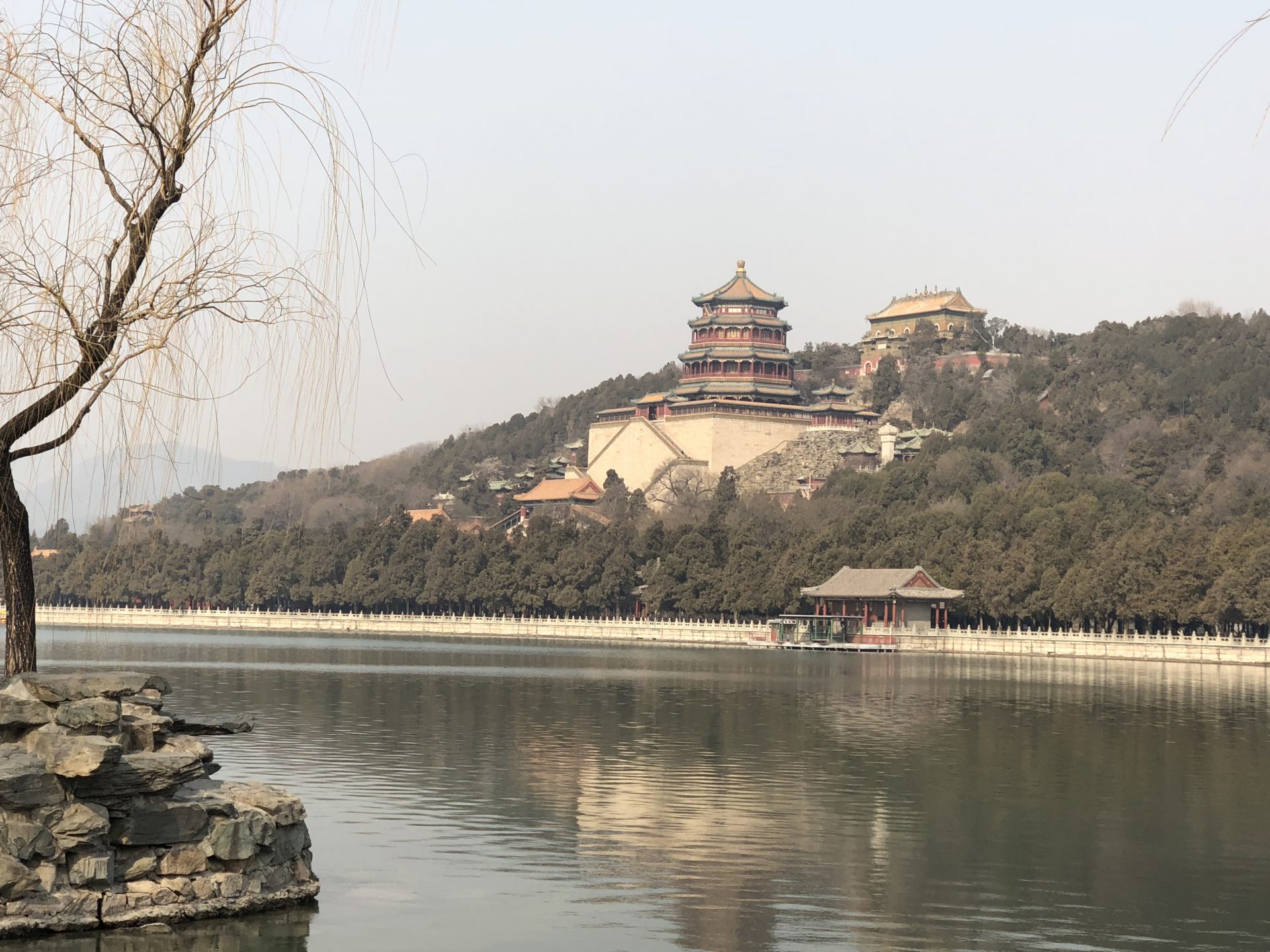 The grounds of the Summer Palace were beautiful, even on a cold and slightly smoggy day.

Among the scandals surrounding the Dragon Lady is that of the Marble Boat.  It doesn’t float and was never intended to.  Legend has it that the Dragon Lady embezzled funds earmarked to rebuild the Chinese Navy so she could restore her precious Summer Palace and its fun party boat.  The father of her adopted (emperor) son was the head of the Navy and even as his navy deteriorated, he chose to look the other way undoubtedly because she had a history of terrorizing people.  It’s said she gained some compassion towards the end of her life and spared a few enemies the agonizing ‘death by a thousand cuts’ and beheaded them all instead.  I think Mr. Navy survived. 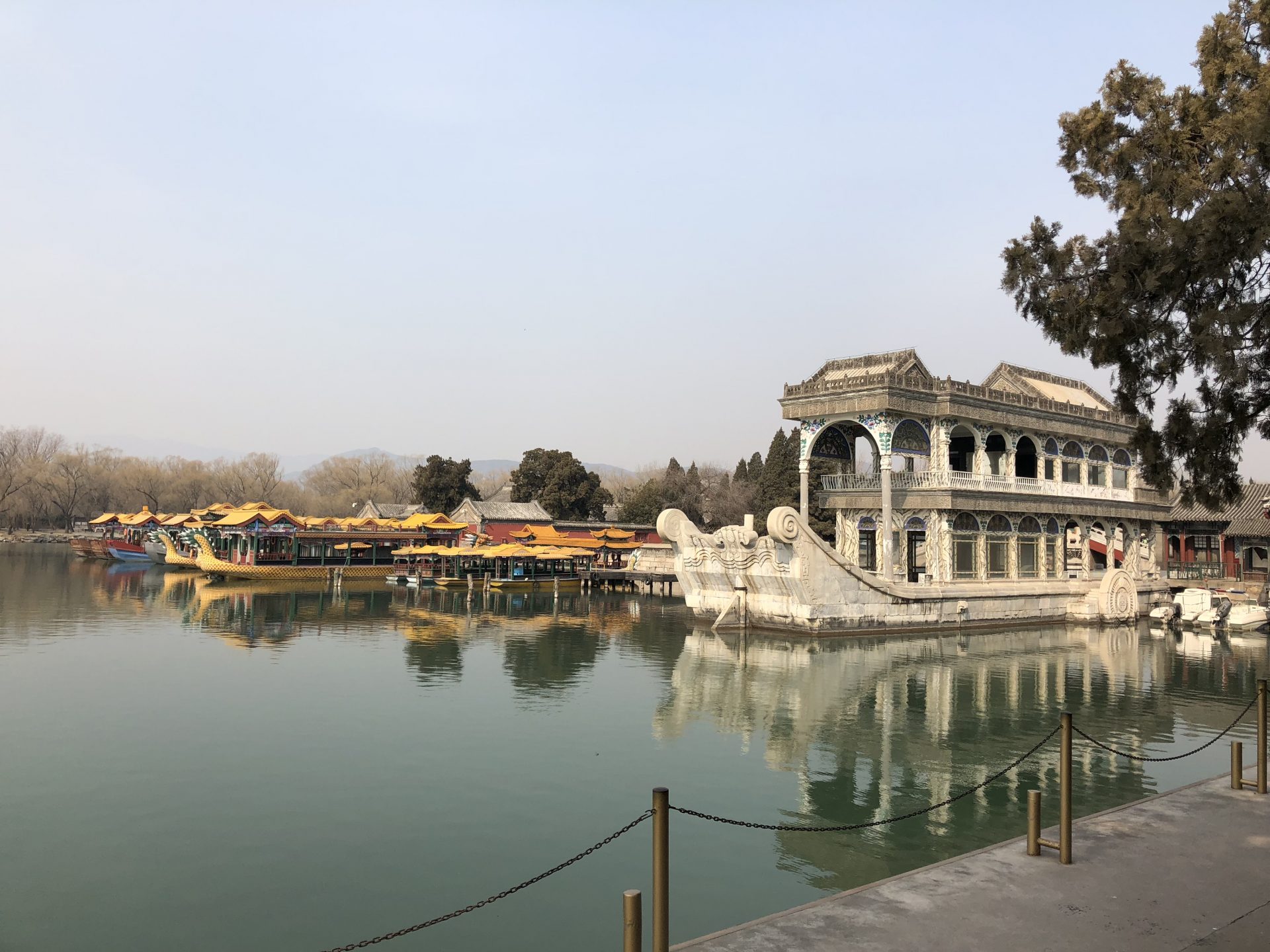 Continuing the ‘vast spaces and freezing cold’ theme, we stopped at the site of the 2008 Olympics.  There used to be a suburb where the Olympic Village is now.  As they did with the old houses in Shanghai, the Chinese government uprooted the residents, gave them all new houses and ensured they had enough money to never have to work again. (Insider tip:  Winter Olympics will be held just outside Beijing in 2022.  Call a realtor now to snap up any available properties that are in the way of the ski jump or bobsled run and kiss your mortgage goodbye.)

Fortified by a late lunch of Peking Duck (delicious!), we meandered around some of Beijing’s ‘hutongs’:  neighborhoods of ancient, narrow streets created by linking ‘siheyuan’ (or traditional courtyard residences) together.  Families have lived in these residences for generations.  Not that long ago, Beijing was primarily made up of hutongs, and most had gates (they were the original gated communities); many have been demolished to make way for the universe of skyscrapers that is modern Beijing. The remaining hutongs are still lived in but protected as ancient treasures.  They did not and still do not have private bathrooms.  (A live tour of one of the more commercialized hutongs can be seen here )

Our last hour in Beijing was spent trying to find something that is near and dear to my husband’s heart and that the trip would have been incomplete without.  Here’s the happy camper himself at the end of our successful search: 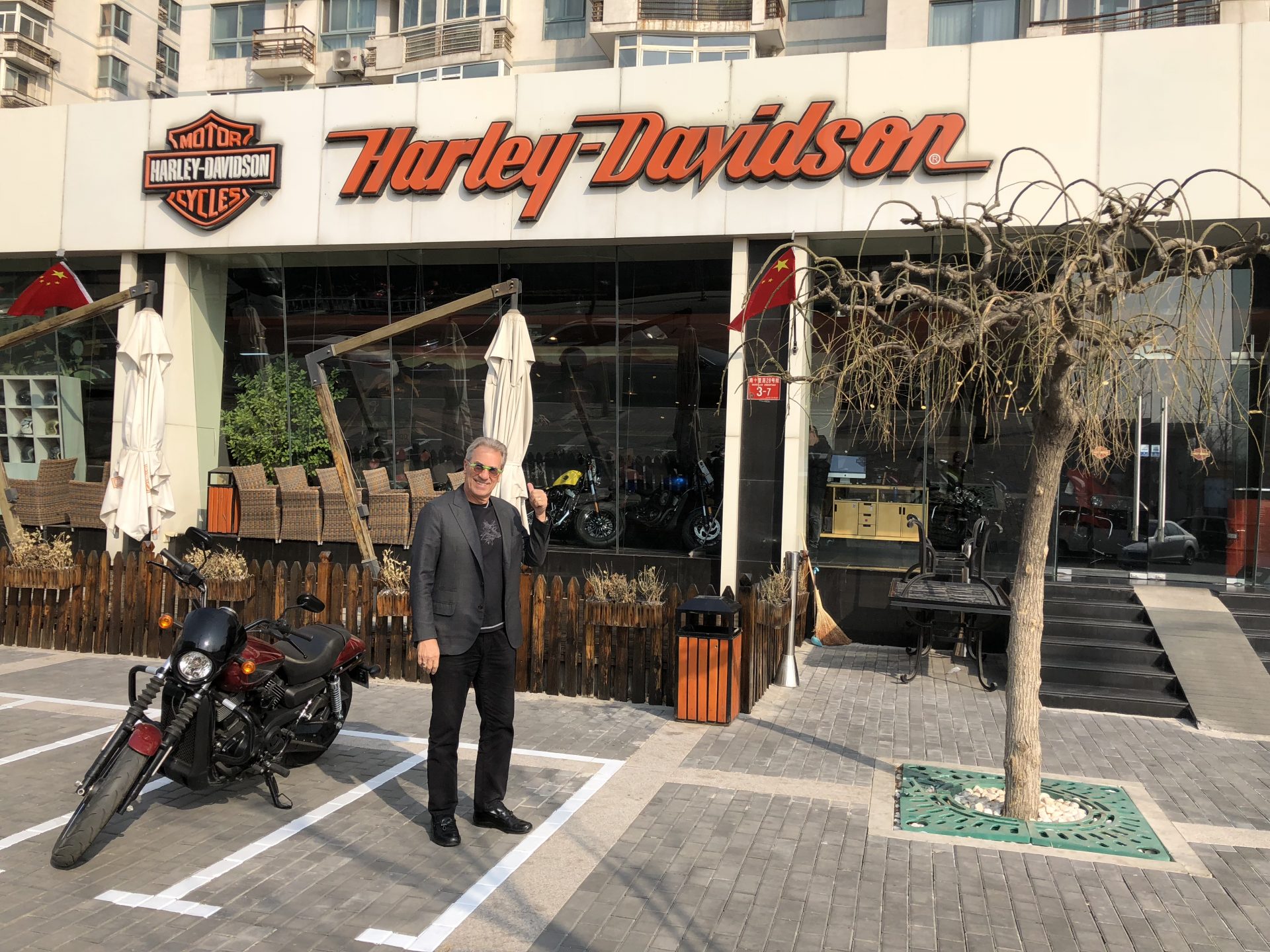 Thanks so much for accompanying us on this wonderful adventure.  I release you now from having to read any more blogs from me… until the next time!   (Summer 2018:  England, Norway, Denmark, Poland, Russia, Finland and Sweden.  I’ll try to keep it short…)