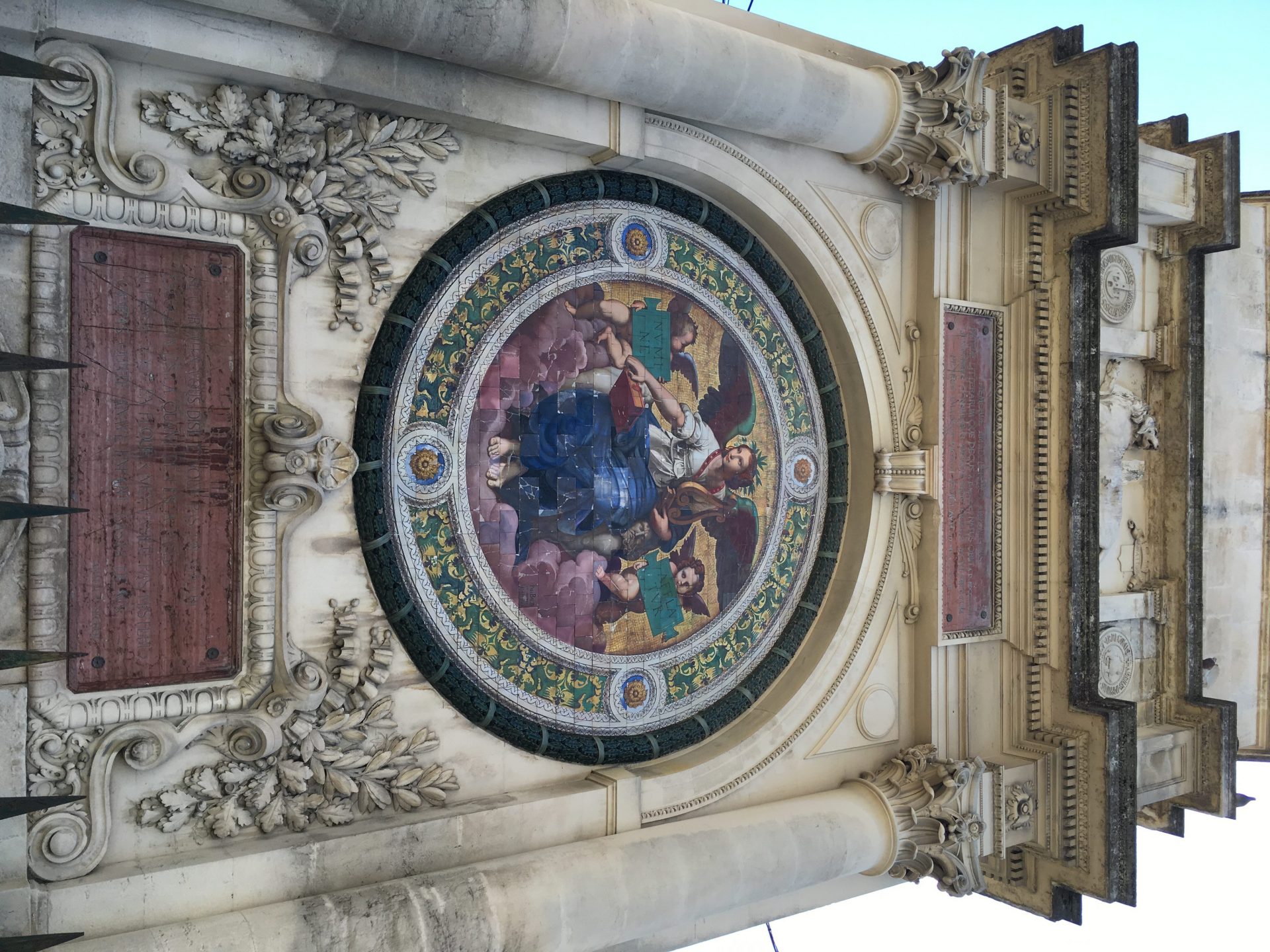 (Sorry about all the sideways pictures on the first iteration of this post.  I have to stop drinking.)

The bittersweet last stop on our French River cruise.  Arles.  Site of a well preserved Roman amphitheater.  Site, too, of Van Gogh’s ear removal.  Arles.  Now, the non-French-speaking among us will struggle with the pronunciation of this town’s name.  We’ll say things like: “Are Lay” or “Aruls”.  Wrong, wrong, wrong.  Please see the second word in the title of this post.  Now say it:  “Aargh”  BUT drop the ‘G’ at the end and insert an ‘L’ (but feel like you’re swallowing your tongue while doing it).  There!  Now you have it!  You, too, can speak French like a… well, like an American.  You’re welcome.

(Note from the broad:  Attentive readers will have noticed that there has been a significant gap in reporting on our French River Cruise.  You’re either thinking:  this is the world’s LONGEST river cruise (if only!), OR, it finally happened – Roger had enough teasing and pushed Elaine overboard.  I regret to inform you that neither thing happened.  The cruise ended after 7 days AND Roger will still be at my literary mercy.  The gap is due to the incredibly boring lack of wifi at our next destinations.  But, more on that later…)  Now, back to our regularly scheduled programme:

Our little ship docked at the pretty port of Tarascon, home to the riverside Chateau de Tarascon, a cozy pile begun by Louis II of Anjou (of pear fame.  Again, don’t quote me.  I make this stuff up.).  His son, Good King Rene’ (he sounds like fun, no?) finished the building in the late 15th century and promptly died.  Somehow, this action (or inaction?) on his part turned the chateau into a prison until 1926!!   Rooms worth noting: 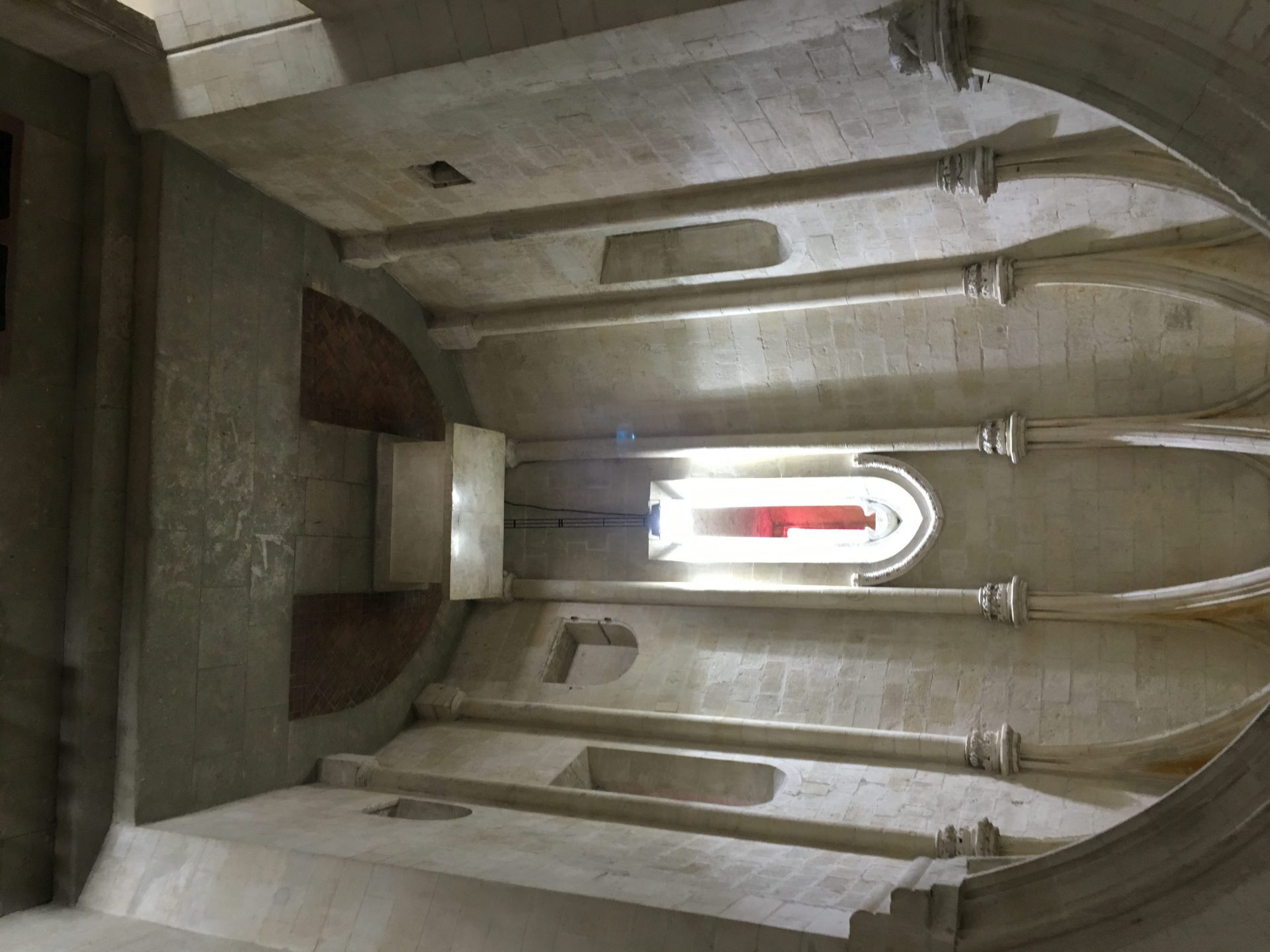 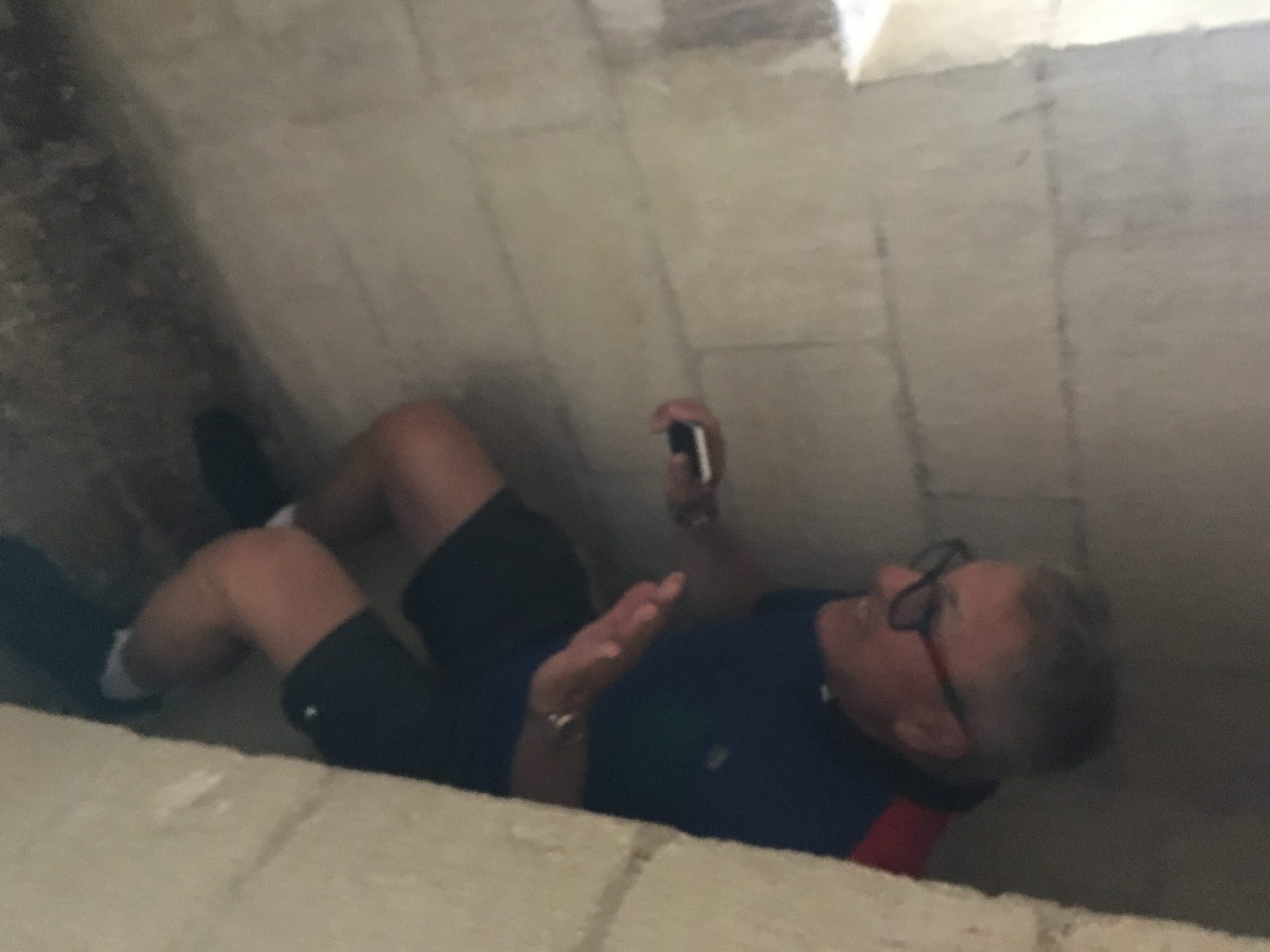 A few random pictures from the chateau.  (I don’t think the bird and wall art dates back to the 1500’s.)

Arles was just a short bus ride away.   (Oh, bane of river cruisers.  Many towns did not conveniently situate themselves directly on the river, so we were forced to board luxury motor coaches if we wanted to visit.  The other option was to sit quietly on the top deck of the ship and contemplate the gentle motion of the river, the unique local flora and fauna all while enjoying adult beverages expertly served by a five star crew.  We all boarded the bus.)

In Arles, there are 3 main attractions (I’m reasonably sure there are more, but we only had 3 hours before we had to reboard the bus): 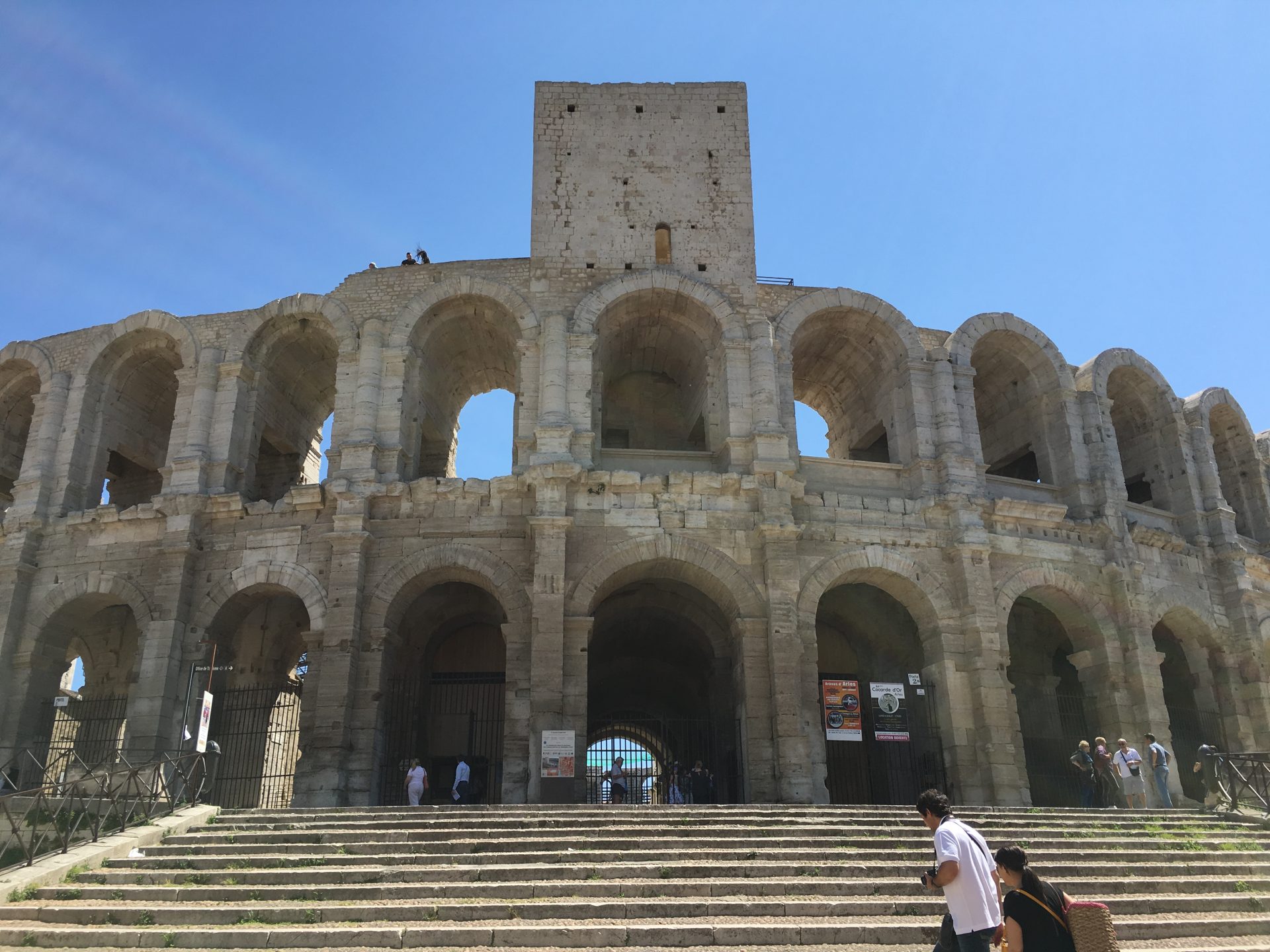 This beautiful mosaic that greets you when you enter the town:

The Roman Amphitheater in Arles, as opposed to amphitheatres elsewhere, is unique because it is integrated into the local neighborhood – much like the old, single-screen movie theater in the US.  You could just ‘pop out’ on a given evening and catch a chariot race or some bloody hand-to-mace contact sport.  Built in 90 AD, the amphitheater seats 20,000 and is still used today for concerts, plays and a modern bloody sport – bullfighting.

The mosaic is not actually a main attraction, but it IS beautiful.  We spent some considerable time gazing at it instead of visiting the Roman necropolis or the Thermae of Constantine.  (I’m not bitter.  Really. Just stating the facts. There’s always next time.)

Van Gogh, as I’m sure you know, spent 16 months here, when he was 34-35 years old.  It’s said that he fully realized his style of bright colours and deft brush strokes while he was living here.  Sadly, the little yellow house he lived in was destroyed during World War II.   But the famous cafe featured in his “Cafe Terrace at Night” is still there, as is the hospital where he was treated for mental illness.

Which brings me to the end of the first leg of our trip.   The weather was fine, the sights along the Rhone were seductive and Uniworld conducted a stellar voyage.  The last night onboard was spent saying goodbye and enjoying a final, superlative meal (before another bus ride – this one to Marseille airport the next morning).  Roger, as you can see, earned his sommelier cup for the prodigious quantity of wine drunk on this trip through the Rhone valley. 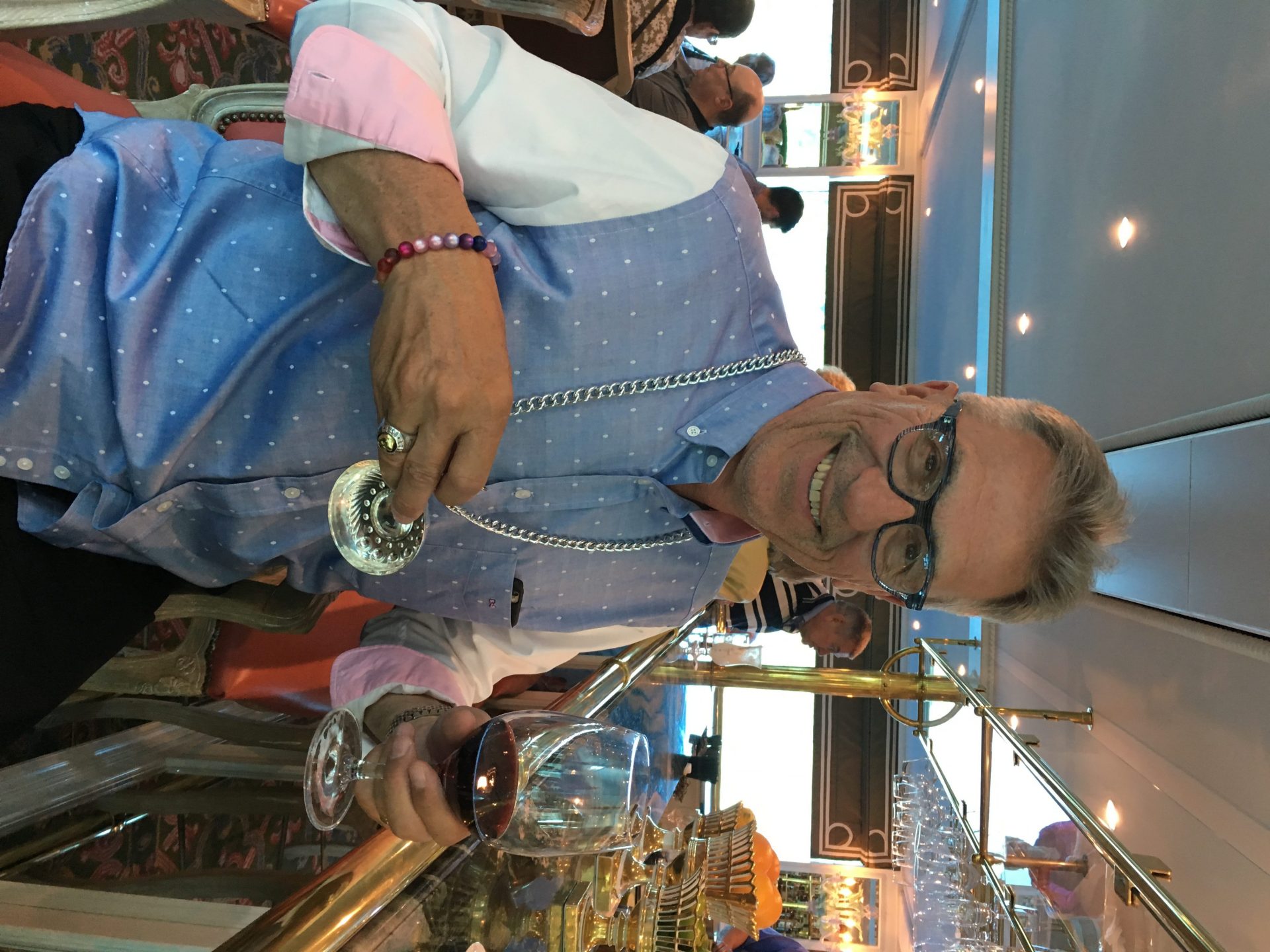