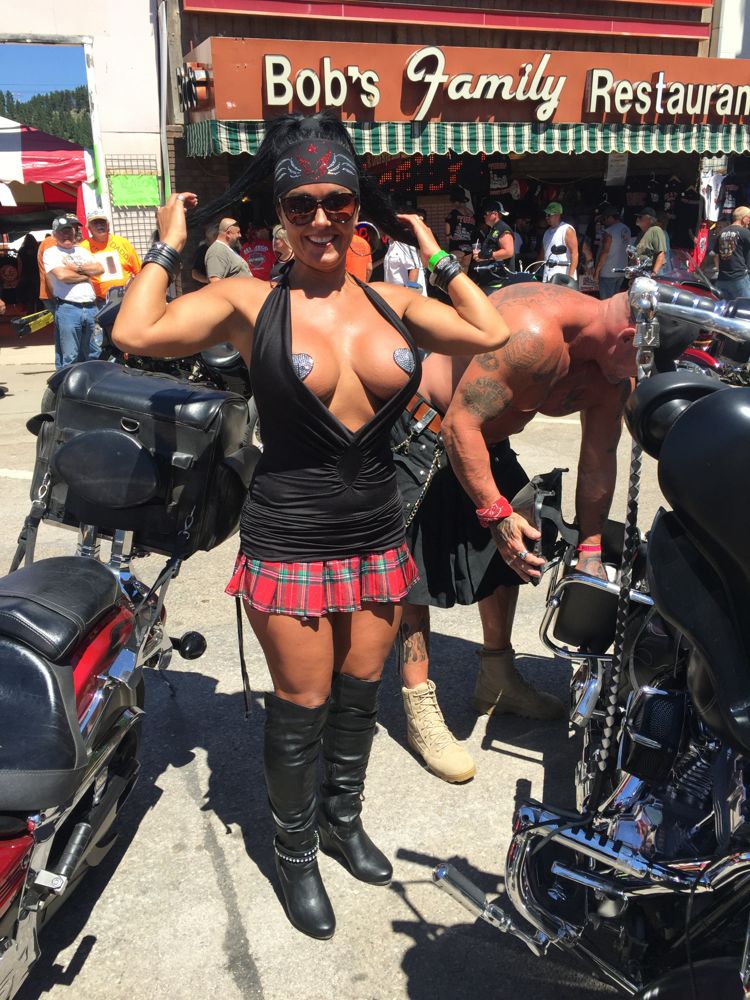 In August, when a young (and older) man’s fancy turns to thoughts of love – it’s probably motorcycles that they’re loving!  From all corners of the globe, motorcycle enthusiasts of the male and female variety  (let’s just call them ‘bikers’) make the pilgrimage to Sturgis, South Dakota, for the annual Sturgis Motorcycle Rally.  With a year-round population of 6,400, the town of Sturgis is happily overwhelmed by the thousands (make that hundreds of thousands) of bikers who cruise into town for the week.  And this year, the 75th anniversary of the rally, is proving to be the biggest of them all.   Over a million bikers were expected and I’m pretty sure they’re all here.

Bikers take over the streets, restaurants, hotels, campgrounds, gas stations and every rental port-a-potty in the Black Hills in a ‘normal’ rally year.  This year, we’ve seen traffic back-ups (unheard of in South Dakota!), lines at 7AM for breakfast, and crowds of leather clad bikers (in 90 degree heat) everywhere.  We’ve also seen the petrified families who didn’t do their pre-vacation ‘homework’ driving through the Black Hills, trying to dodge the motorcycles while yelling at the kids to lock the back doors.

Biker culture, at least during the rally, is not all it appears to be.  That grizzled group of 4 unshaven guys, with their leather jackets and boots on, revving their engines in front of you at the stoplight are just as likely to be your neighborhood banker and his cronies.  (With hotel rooms at $450/night – and sold out! – you know there are plenty of professionals and entrepreneurs resting their wind-whipped heads on downy pillows at night.)  Campgrounds, like the Buffalo Chip, are where the real fun is – ‘biker’ bands play late night concerts every night (think:  Alice Cooper, ZZ Top, Steve Miller, Lynyrd Skynyrd) and campers can drink as much as they want and not have to get back on their Harleys to head home.  Thank God. (Many of the campgrounds also host attractions such as The Budweiser Clydesdales … and friends!)

Don’t get me wrong – there are REAL outlaw bikers here.  Many chapters of the Hell’s Angels have booths set up along Main Street where they sell T-shirts, patches and I’m only guessing ‘some other stuff’ to the thousands of bikers who stroll up and down the ‘Main Drag’ of Sturgis each night.  There are also scores of REAL police officers on the streets at all times; the incidence of crime during the rally is suprisingly low (given the number of bikers here) (yay!).  Once public nudity was outlawed in 1992 (boo!), the uncontrolled and somewhat violent rally calmed down considerably.  But it remains a very popular, one-of-a-kind week-long party.

Enough with the facts.  Being at the rally is all about what you see and do (and ride).  Here’s my album of images from this year’s rally:

Sturgis is surely the t-shirt/bizarre apparel capital of the world!  Some options:

And can’t forget the  motorcycles…

My brother, Bob, attended his first Sturgis rally this year – and it was great fun seeing the rally through a ‘newbie’s’ eyes!  He shot some interesting videos – if  you’d like a bit  more of the ‘real’ rally experience, settle in for 7 minutes and enjoy (the beginning has a bit of sun blur in it):   Opening day of 75th Sturgis Rally.  Old habits die hard, and even though we don’t see each other too often, we slipped right back into our old roles.

P.S.  If you’re interested, my brother also shot videos of:

Ride down Spearfish Canyon and Our Home in South Dakota