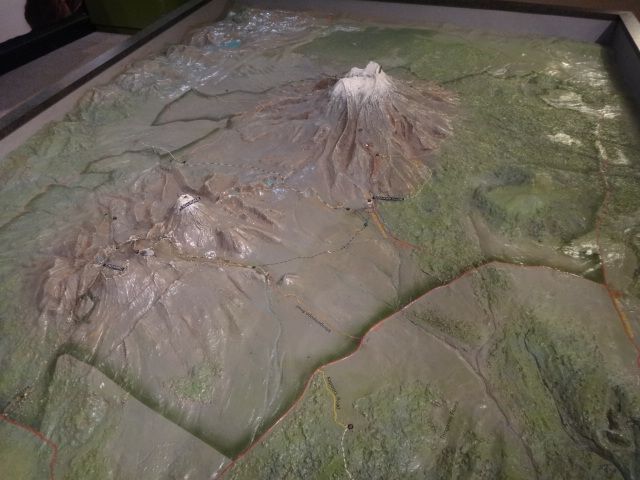 We’re sleeping tonight in the shadow of not one, not two, but THREE volcanoes.  Two are active; the most recent eruption was in 2003.  Nothing to worry about:  the guidebook assures us that “NZ’s volcanic nature can be destructive, but overall is a blessing in disguise.”  It then goes on to say “in the Central Plateau (yep, right where we are), a different form of lava produces a very dangerous, explosive type of volcano”.  (As opposed to those dribbly, kindly volcanoes we’re all familiar with??)  Kiwis (New Zealanders) carry on as if living in the Pacific Ring of Fire is no cause for concern, so we’re trying to do the same.

Helping us, or NOT helping us, as the case may be, was spending time in an interactive exhibit at the Museum of Auckland.  We walked into a typical Kiwi home and sat down in a comfortable living room, our gaze directed to a floor to ceiling panaromic view of the harbor and the islands beyond.  A television flickered on with a special report about a submerged volcano now rumbling to life.  Scenes of logjammed highways and panicked people appeared while a trusted scientist commented on the imminence of the eruption.  Just as he finished speaking, the room jolted sideways rather violently and we watched a tower of fire and ash rise up out of the waters and come rushing, at 150 mph, towards our comfy perch.  End result:  everyone in the living room dies. (Note:  there is a posted warning at the entry that people might find the exhibit ‘unsettling’.  Gosh, I don’t know – being burned and suffocated to death in a rushing lava field, unsettling?)  So, here we are, peacefully (!) sleeping in the shadow of the three volcanoes in Tongariro National Park. Waiting for the jolt.

Our accommodation, The Grand Chateau, is the closest thing the Kiwis have to a National Park Lodge; it is a 1929 structure that is probably jumping in the summertime.  Tonight, about 20 of us gathered in the elegant dining room for a quiet dinner as we all tried to ignore the volcanic evidence that surrounds us.

This is the chateau, in the rain and mist, as seen from the road as we arrived about 5 PM.  At this point, we were both a bit under-impressed by our first New Zealand national park experience. 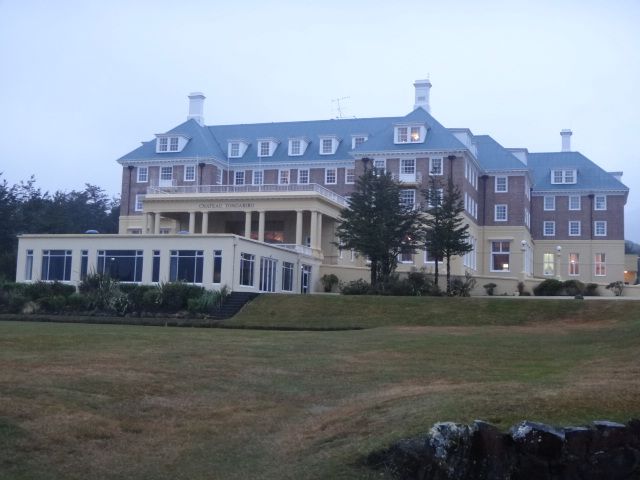 The next morning, after a thankfully quiet night and a moment of clearing skies, here’s what we saw:

We’re really quite saddened by the realization that we’ve probably missed miles and miles of scenery just like this as we’ve ‘enjoyed’ driving through the subtropical rain.  And that this national park likely rivals most of those ‘at home’.  Maybe, just maybe, we were better off not being able to see the volcanoes before tucking ourselves in last night.